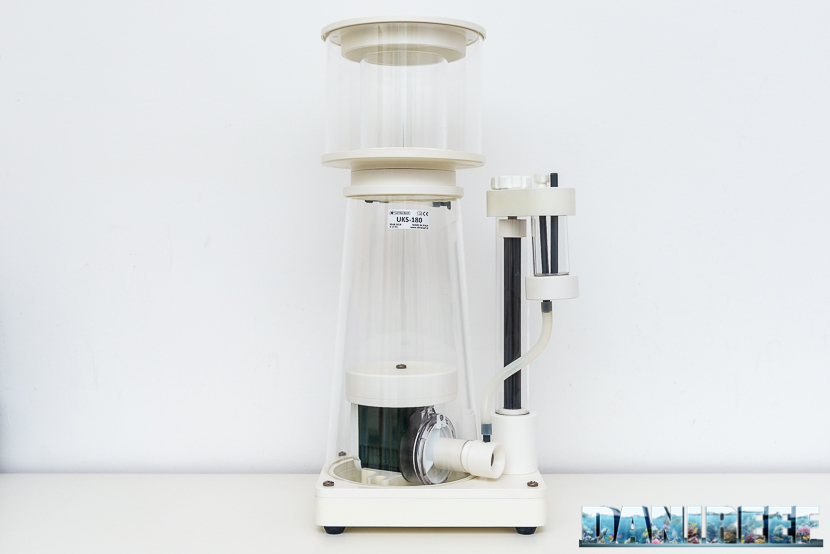 The UltraReef Akula 180 is the ultimate skimmer according to its Milanese builder. We tested it thoroughly and we agree that it is one of the best skimmer we’ve tried.

We tested it in a 450 liter (120 gallon) aquarium, which had originally been fish-only, and was converted to an SPS tank. So the organic load is already high and will probably continue to be even higher.

The first thing that hit us was the very high quality of the construction. We’ve seen all the skimmers released by UltraReef, and we can say this is the nirvana among all those built! We don’t know how it could possibly be improved!

The construction of the UltraReef Akula uks-180 is excellent. It has no flaws and the matching between plastics is absolutely perfect. 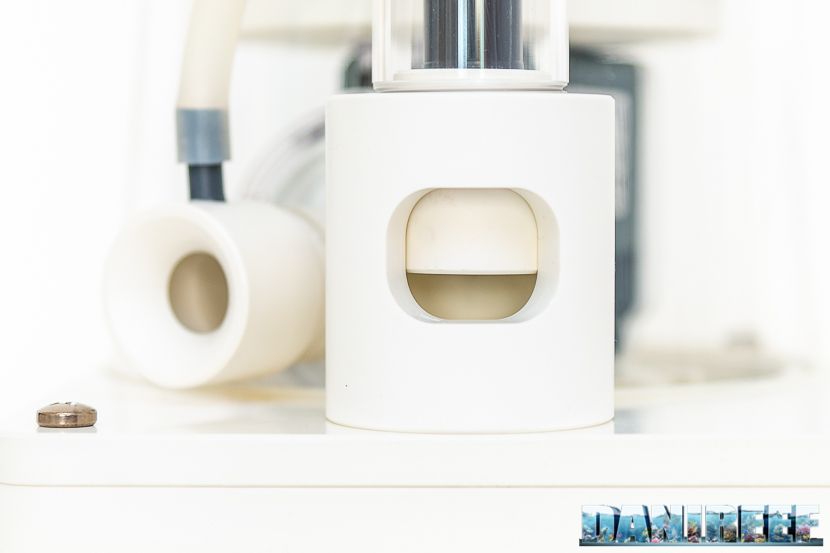 It works according to a classic scheme but with the bonus of an inner pump. The pump is a sicce PSK1000+ that is positioned a few cm from the bottom of the sump, and water comes in from below, under the pump, as you can see in the following picture. So the water is pulled inside a circular perforated diffuser that then brings it to the central body of the skimmer. 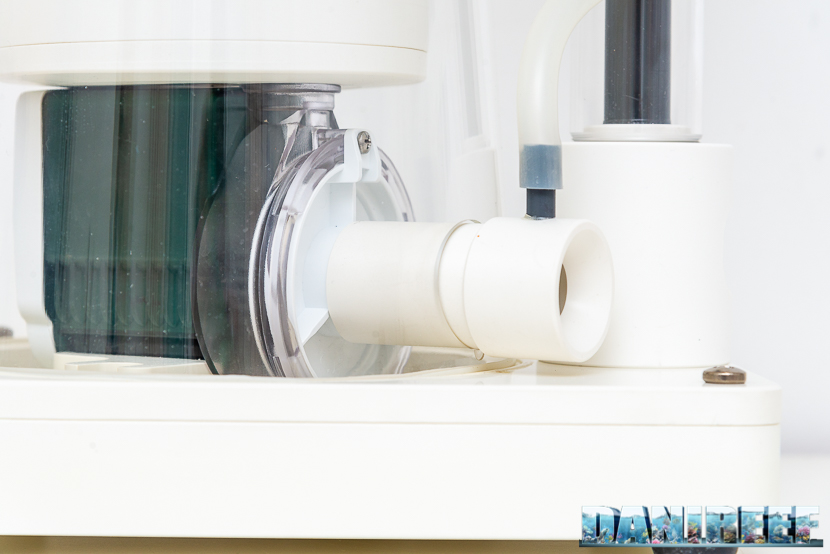 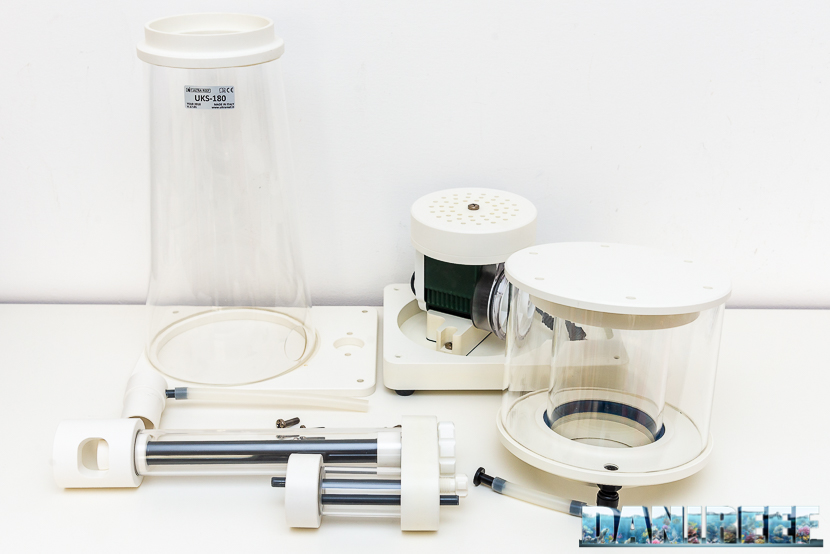 The glass has a diameter of 17,4 cm (6.9″),with an inner cylinder of 10 cm. It can be filled to 11,3 cm (4.5″), so the glass has a useful head of 1,8 liters (.48 gal). However, it’s practically impossible to keep it filled to that level, because at that point the glass would have so much sediment that it would slow the skimming, making it inefficient. 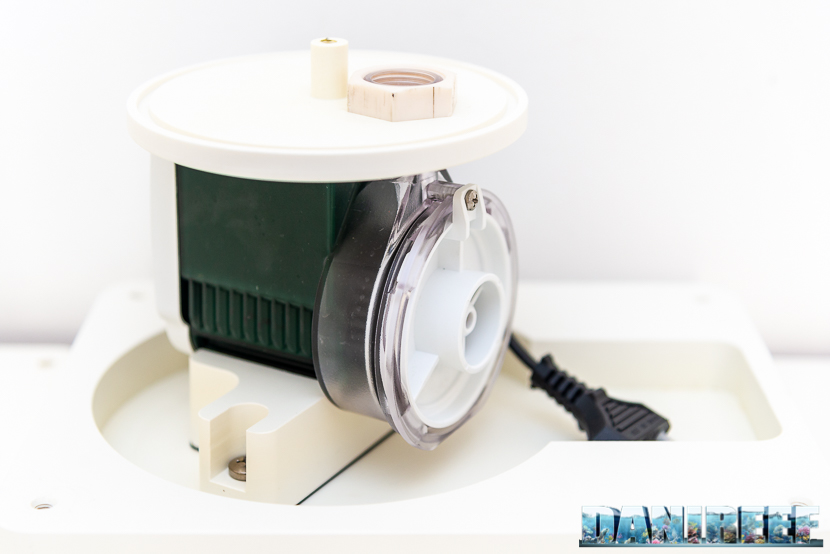 The assembly of the Ultra Reef Akula uks-180 skimmer, even if it may seem complex, is very simple and allows one to completely disassemble the skimmer. The cylinder has to be put over the base where the pump is inserted, and then the drain is attached. The glass is inserted into the body through a spectacular seal that guarantees an optimal hydraulic seal. 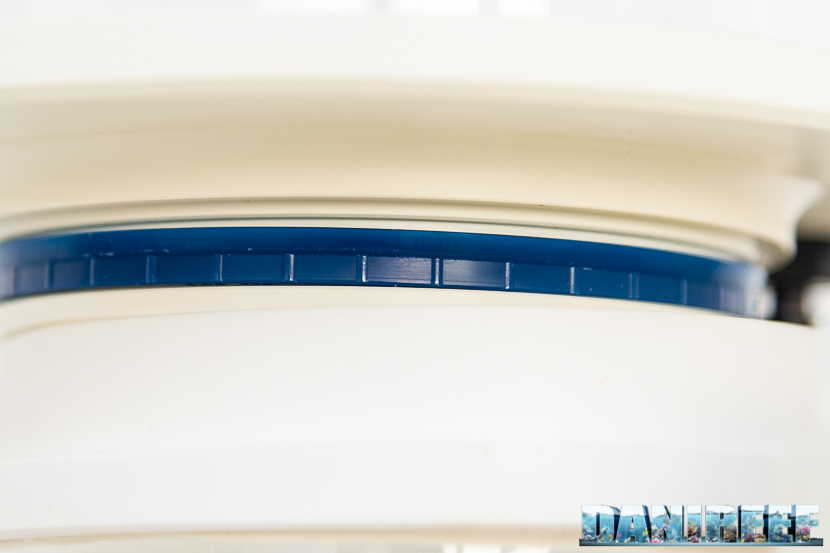 The glass is extremely heavy, solid, and really, really well built. And there’s a big improvement from the past models: the 10 cm inner cylinder can be easily removed, making cleaning much easier. 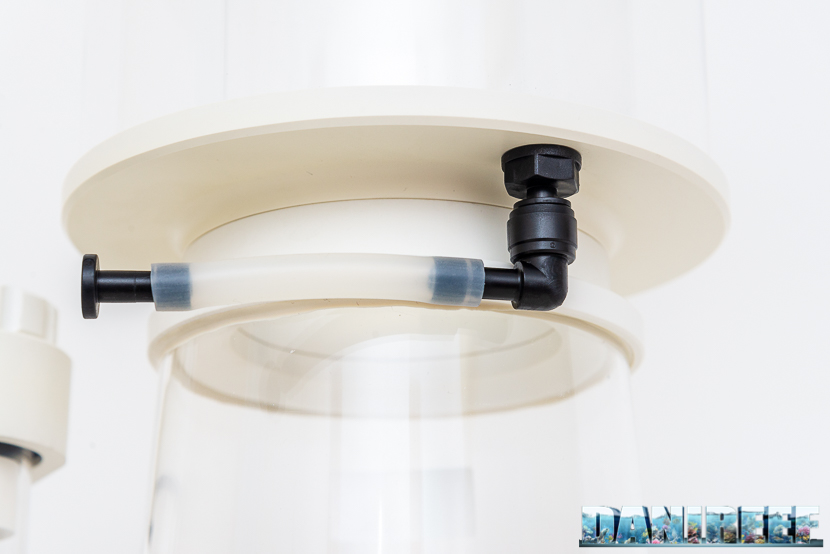 The pump that comes with the Ultra Reef Akula uks-180 is a sicce PSK 1000+, a very reliable pump that is used with a lot of skimmers on the market.

Given that it’s a mono-pump, we don’t have to worry about the quantity of water entering the skimmer; the water-air ratio has already been decided for us. The suggested level for the sump is about 20 cm, including but should accomodate heights between 19 and 22 cm.

The functioning scheme is very simple. Water and air are mixed and enter the body of the pump from below, which then mixes them further and diffuses the result into the cylinder. As always, simplicity is a virtue. The skimmer works very well and is very straightforward in its functioning. 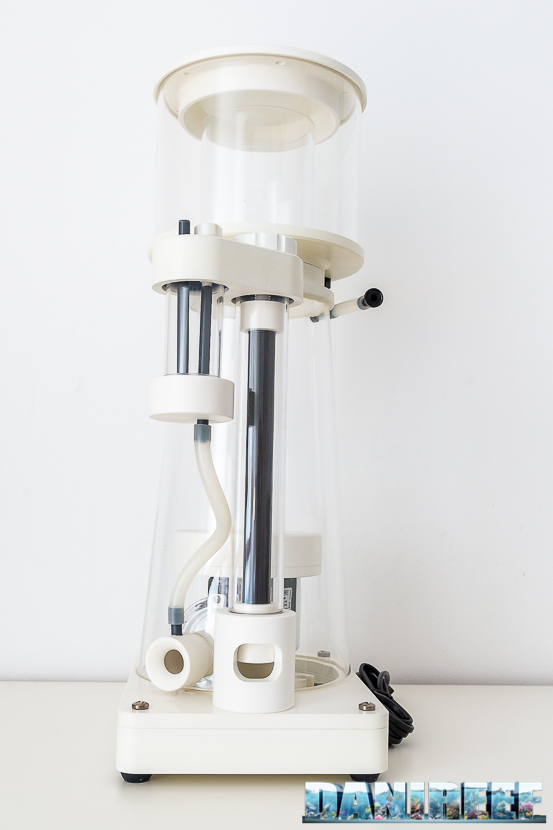 The only way to change the calibration of the Ultra Reef Akula uks-180 is by rotating the pommel on the drain pipe; once you find the right amount of exiting water, you can fix it using the small pommel. 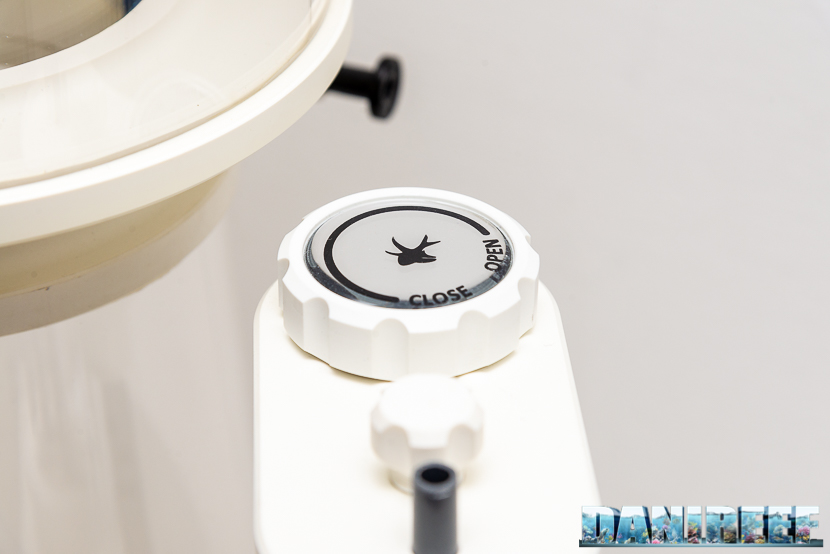 The set up is very easy, because you have any choices to make. You take the UltraReef Akula UKS 180  and put in the sump. Sic et Simpliciter as the Latins said. 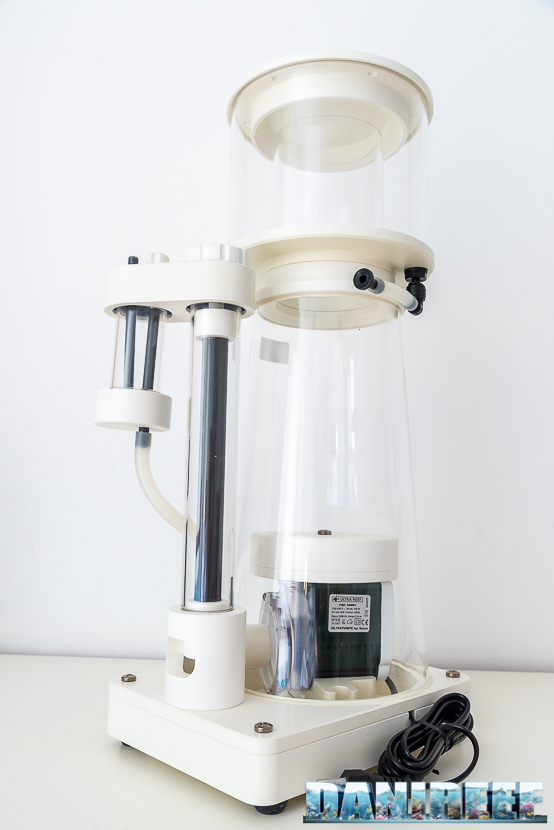 The drain is below the water level so it works very quietly.

The skimmer is ready to work as soon as you put it in the sump and the foam fills its body: it will start at the diffusion plate and grow until it reaches the end of the glass. The foam is soapy, with pretty little bubbles. 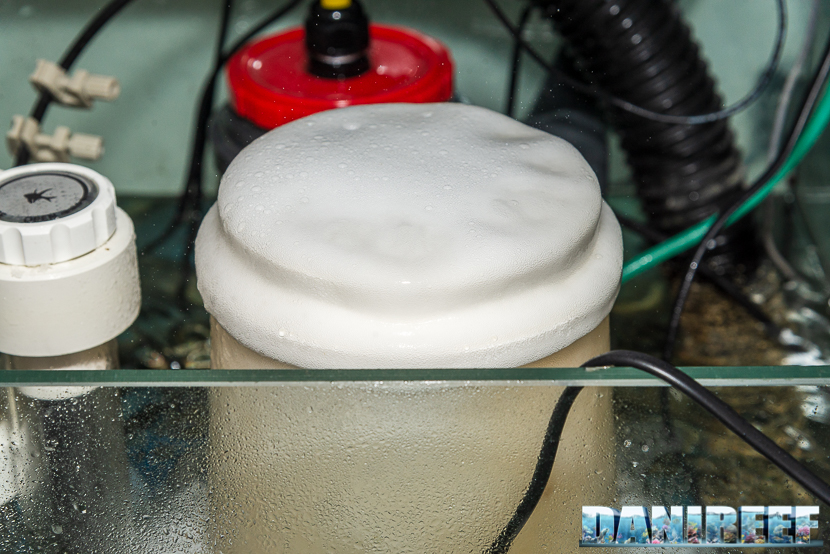 The suggested level in the sump is about 20 cm; by design, at that height, the water pressure and the suction of the air are perfectly in equilibrium. 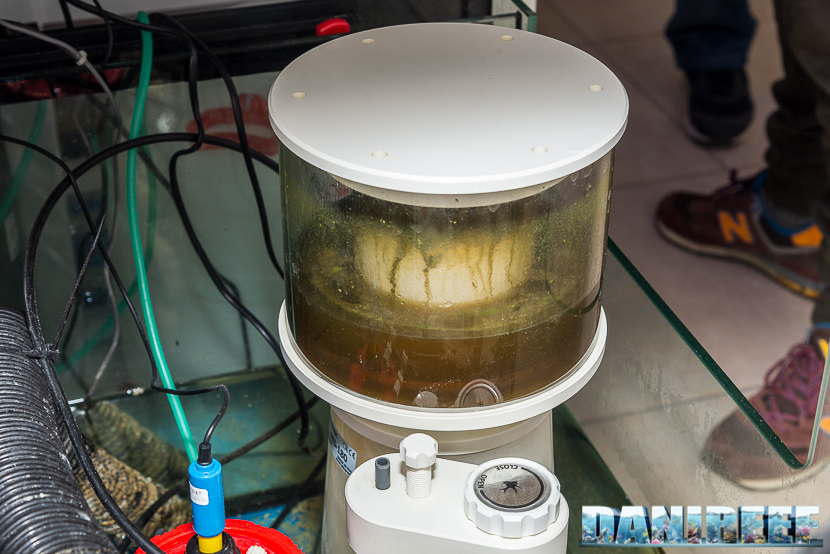 Lit by 3 Maxspect Ethereal and with water movement provided by two Rossmont pumps, we expect that this aquarium will some day be named a marine aquarium of the month. 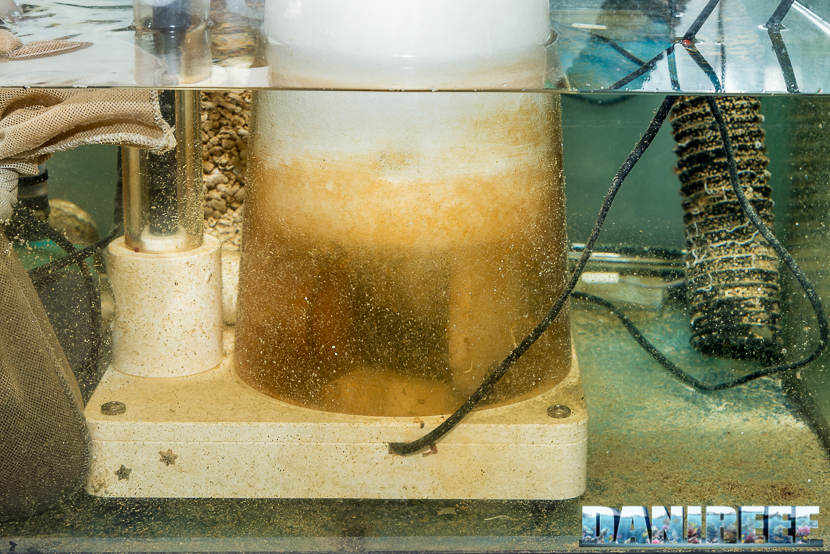 The foam is very soapy, the skimmer is great for color and resistance, and is wet enough, both for Fabio and for the peculiar characteristics of the skimmer. The foam filled up the glass very easily, even after a total cleaning. Note: the bubbles are a little bigger here because of the recent cleaning. Above, you can see Fabio‘s aquarium, an 150 cm (60″) wide tank in which a lot fish, including 4 Zebrasoma flavescens, can freely swim…

After over six months of use we can confirm that the skimmer UltraReef Akula uks-180 worked perfectly. 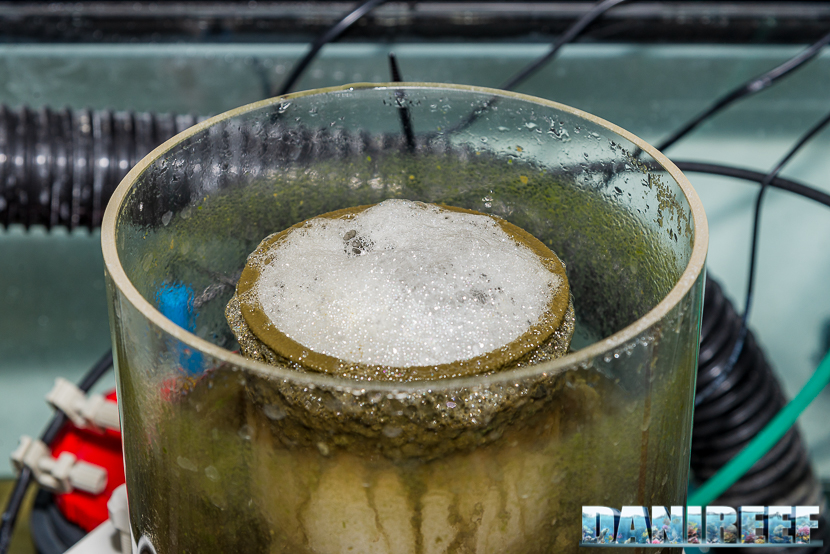 The manufacturers have declared a flow rate of about 1,400 l/h and an air flow between 700 and 800 l/h. We remind you that the numbers depend on a lot of factors, such as the water height in the sump, the height of the water column inside the cylinder, and most of all the salinity, which in our case was 35 per thousand. The relationship between air and water was 0.57. 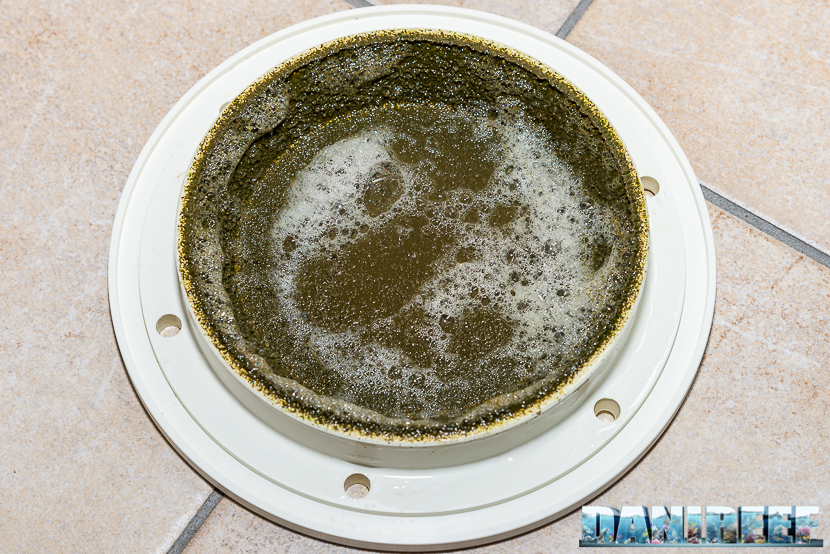 Due to the design of the skimmer, having the drain on the downside, we couldn’t measure the total filtered water. Instead, we used our Sander flowmeter that measures the air from a minimum of 100 l/h to a maximum of 1000 l/h. 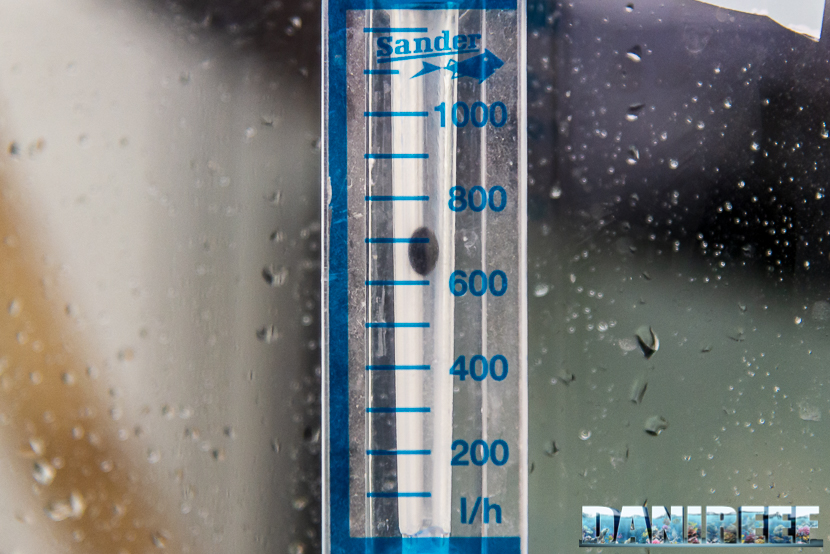 We obtained a flow reading of the treated air of 790 l/h with the air completely open. The value was pretty stable.

The aspiration of the air was virtually identical to the declared value. A great result.

This result can only be obtained if you keep the pump clean and efficient. We verified that if you don’t clean the pump at least every 2-3 months, the quantity of treated air can get as low as 450 l/h.

The skimmer works very quietly. We took three measurements, each 1 meter away from the aquarium and the sump, and we obtained the following results: 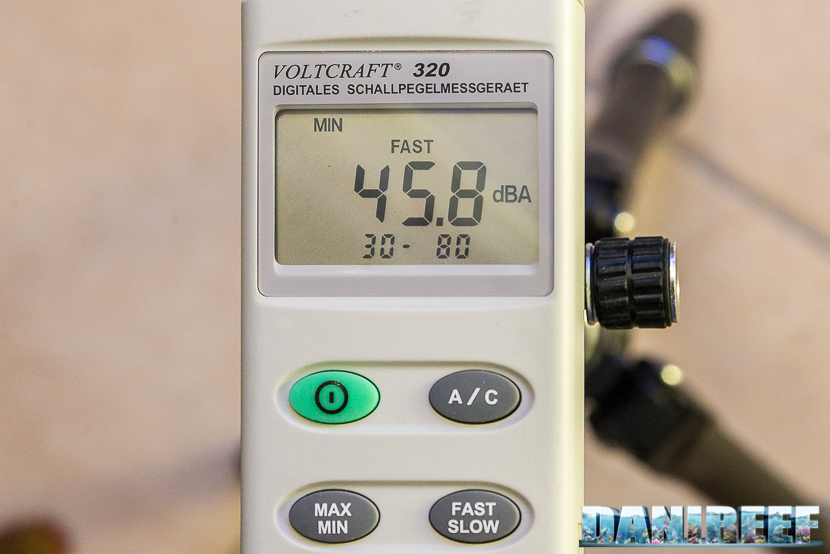 Acoustic pressure from 1 meter with all the devices of the aquarium active and doors closed: 45,8 dB 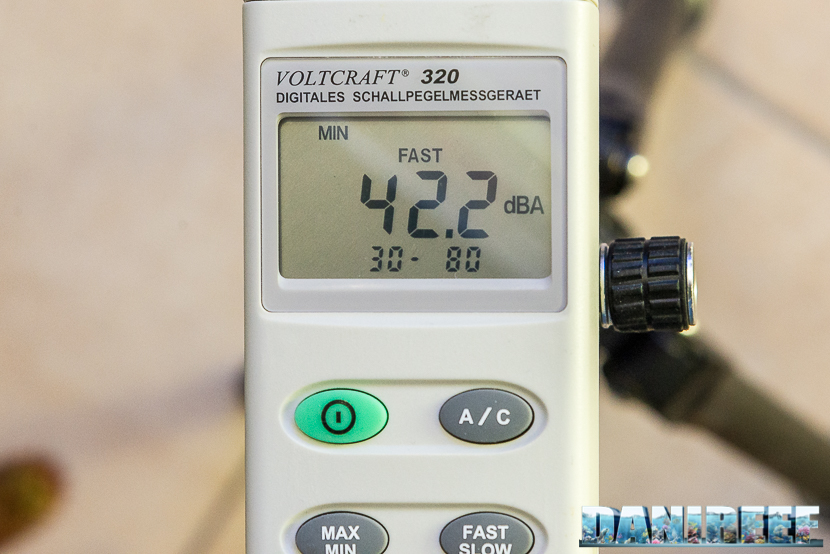 Acoustic pressure from 1 meter with the only return pump active and doors open: 42,2 dB 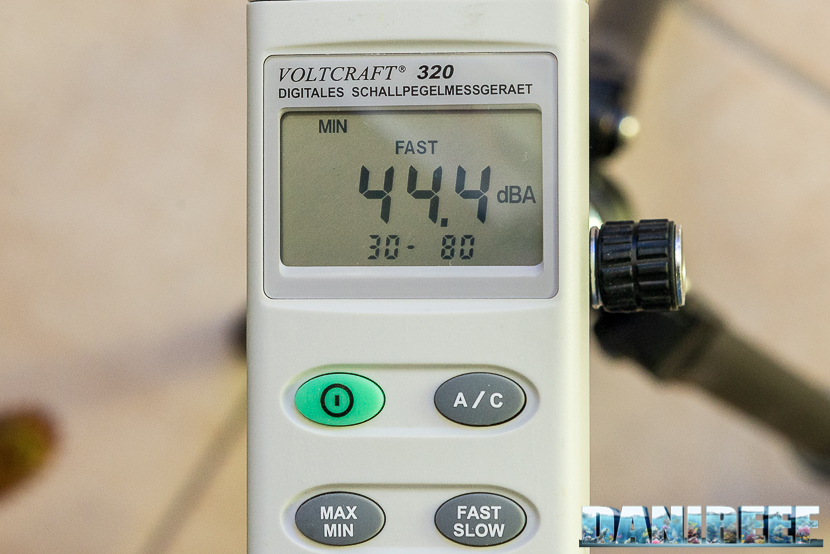 The difference of acoustic pressure measured with the skimmer active and unactive is 2,2 dB, an appreciable value, but still a very small amount when considering absolute values.


The sound level meter we used was our usual VOLTCRAFT 320, the digital device IEC 651 of Type II; very reliable. Given the nature of the noise we measured, all the measurements have been done with the attenuation curve dBA

The pump PSK1000+ is declared to have an impressively low consumption of 57 watts with normal rotor, but sicce declares that the configuration with brush rotor and a mono-pump skimmer has a consumption of about 25 watts, that’s 219 kwh a year, and a price of about 59 euro ($66 USD) if the cost per kwh stays stable at 0,27 euro. 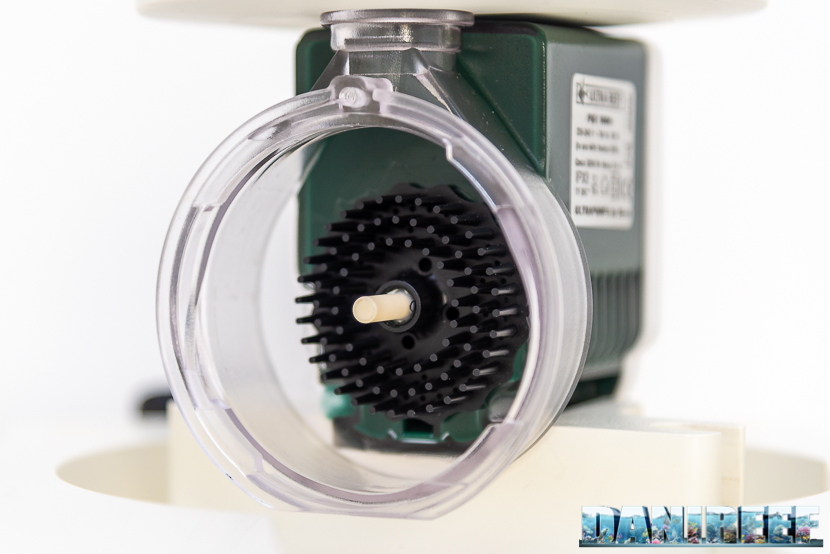 As always, we measured the consumption 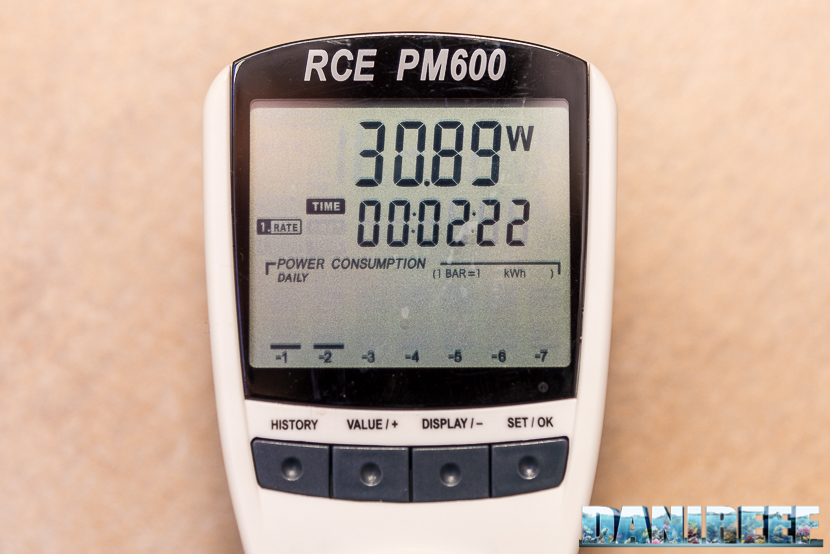 and also the power factor, or cos(fi) 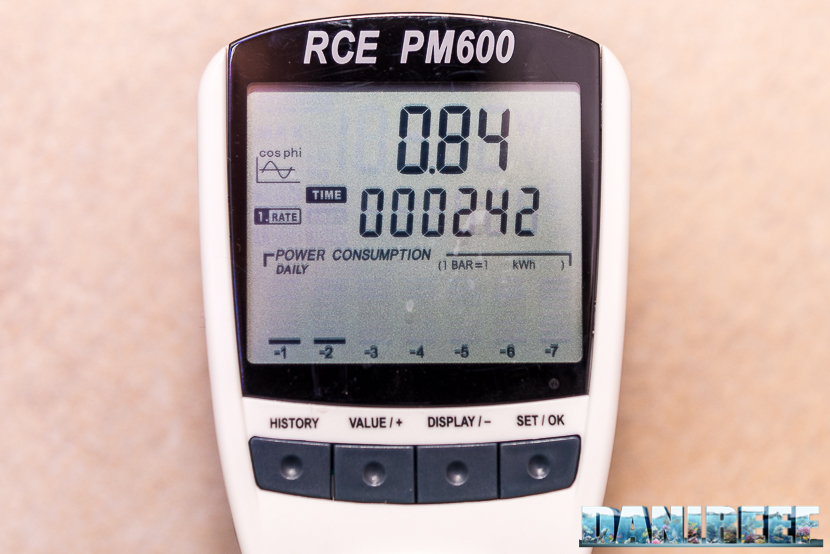 A great value; even though we found the consumption to be a bit higher than the declared one, at almost 31 watts. The difference is that we go from 59 euro a year to 73, a very small increase with a very acceptable maintenance cost of about 6 euro a month.

We really loved this skimmer. The UltraReef Akula uks-180 skimmer turned out to be extremely well-designed, perfectly built, and offered at a very competitive price (especially considering its technical features and performance) of 595 euro, so we can’t do anything besides strongly recommend it! 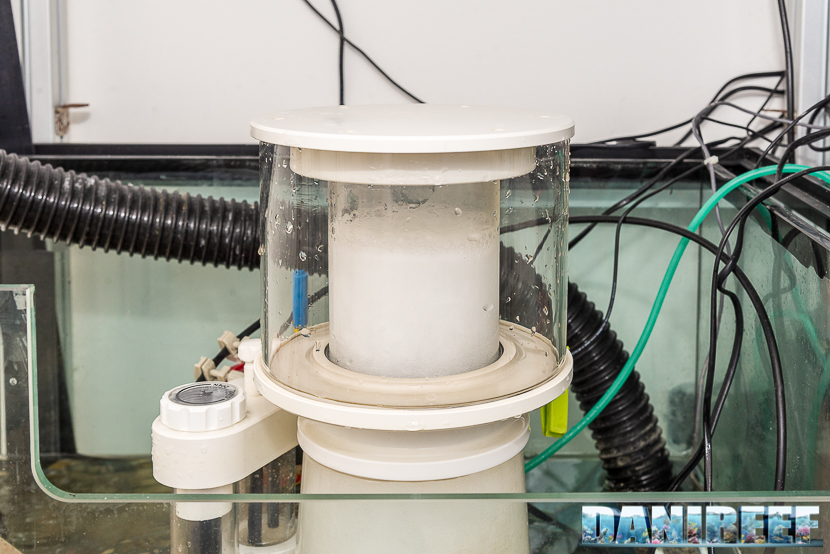 It showed reliability and efficiency in operation, as long as the pump was well-maintained. It’s extremely easy to disassemble and clean and it shows a real attention to details. And the ability to slide out the cylinder inside the glass really caught our attention! 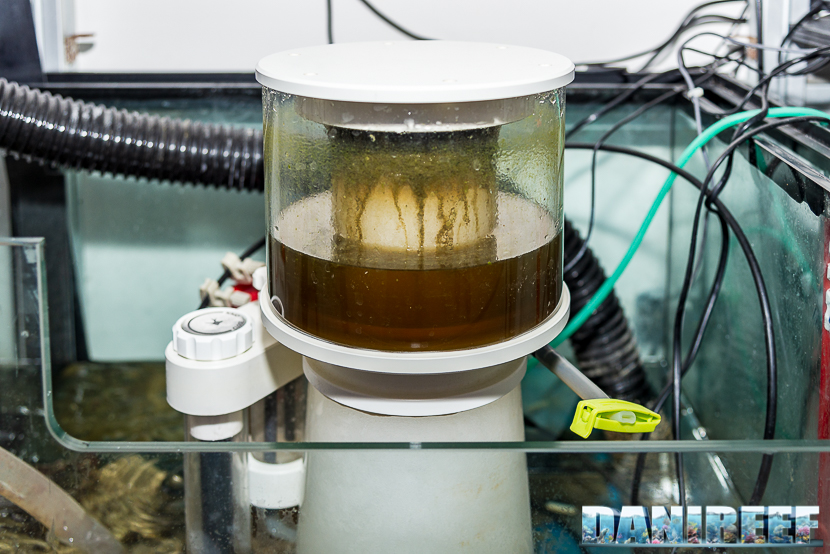 The air suction what was exactly what was declared, which  doesn’t happen very often. Unfortunately, we can’t say very much about the quantity of filtered water because of the conformation of the skimmer kept us from doing our measurements.

We consider it good for an aquarium with SPS corals and fish of 500 liters, but if  it were less inhabited, I think that you could go over 1000 liters.