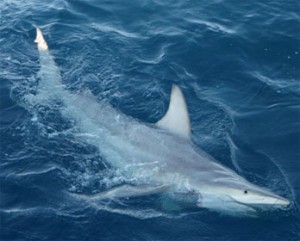 We have all heard of hybrid tangs, crosses between achilles and other species from the same area that have features resembling both parents, but the discovery of hybrid sharks is quite a different matter altogether. The reason for this is that tangs, and most other fish, broadcast eggs and sperm into the water, it’s not surprising then that several eggs become cross fertilized by other species doing the same thing. Moving to sharks, this is not the case. Sharks eggs are fertilized and develop internally and thus potential parents actually have to meet up- if only for a few minutes. This raises then a number of interesting questions as to why there are a large number of hybrid Australian black tip/common black tip sharks showing up along coast between northern NSW and far north Queensland.
One theory is that the shark population is corresponding to climate change. The Australian black tip shark (Carcharhinus tilstoni) and the common black tip shark (C. limbatus) have overlapping distributions along the northern and eastern Australian coastline and can presumably interact with each other. Although they are closely genetically related, they have different characteristics and attain different maximal sizes. During the study, 2000km of coast line was searched, identifying 57 individual hybrids of varying ages that had genetic components of each species. It is proposed by the researchers at the University of Queensland that this blending may create an animal capable of tolerating a wider climate and thus extend its traditional territories. “Hybridization could enable the sharks to adapt to environmental change as the smaller Australian black tip currently favors tropical waters in the north.
“While the larger common black tip is more abundant in sub-tropical and temperate waters along the south-eastern Australian coastline,” said Dr. Jennifer Ovenden, an expert in genetics of fisheries species and a member of the scientific team. Of course, further studies are required to shed light on the possible repercussions of this discovery.
One aspect not discussed in the report is the potential for hybrid vigor to alter the innate characteristics of each parental species. This is a process where the normal genetic regulation of a species is disrupted by new genetic material. The results are usually a somewhat fitter and more robust individual. While neither parental shark is considered a “man-eater” the effect of hybridization on the offspring will be interesting to follow. At this point it is not known if the hybrids are capable of reproduction or are infertile, such as the case of mules.