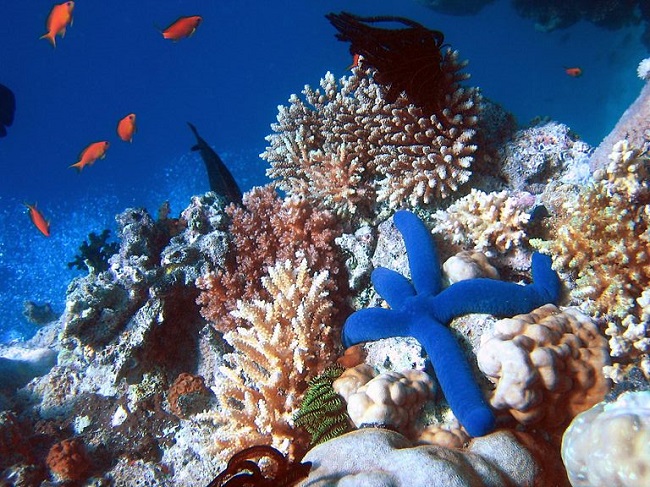 We all dream of sunny beaches—lined with lush stands of palm trees, alive with the chatter of flamboyantly-feathered birds, and surrounded by warm, clear waters teeming with vibrant fishes. Whether we have actually been there or not, we are quite familiar with every detail of the archetypical island paradise down to the stiff, tropical drink.

That notwithstanding, the tropical marine stretches of the world—and the countless coral reef habitats that are often found there—are each truly unique. The Weather Channel recently reflected upon some of the particularities of these diverse environments, and provided a list of the top ten areas it deemed to be the most spectacular.

Of course, one person’s utopia is another’s eleventh choice, or worse. Though Australia’s Great Barrier Reef topped this list, a similar list recently published by travel guide Lonely Planet excluded the much-famed structure altogether (albeit to much resulting protest).

# 10 on this list is the Red Sea. These relatively young reefs are hailed for their pristine condition, which is attributed not only to its innate resiliency (adaptation to temperature extremes, high salinity, etc.), but also because of its lack of polluted river inlets.

#9 is the Mesoamerican Barrier Reef of the Caribbean Sea. This huge reef system is not only rich in fish and coral species, but boasts of an abundance of large creatures such as sea turtles, manatees, and whale sharks.

#8 is the Florida Keys Reef. The warm, shallow waters associated with the Keys are renowned for being hospitable to divers and are home to (aside from moray eels, stingrays, and delicious lobsters) a great number of shipwrecks and underwater sculptures.

#7 is Apo Reef, Philippines. Actually two huge reefs separated by a wide channel, Apo Reef is now a National Park. Once nearly destroyed by abusive fishing practices (cyanide, dynamite, etc.), it has been largely restored to its former grandeur and serves as a great example of how smart management can protect vital natural resources, as well as traditional livelihoods.

#6 is Andros Barrier Reef, Bahamas. Great undersea cliffs, underground caves, mangrove forests, and a myriad of reef zones are cited as the attractions here. To note, it is also home to some of the most dangerous natural places to recreate on Earth.

#5 is the Belize Barrier Reef, Belize. Charles Darwin called it the “most remarkable reef in the West Indies.” Jacques Cousteau made an especially peculiar place—the Blue Hole—famous after a dramatic 1971 expedition there. Despite recent mass bleaching events, these magnificent reefs continue to attract droves of visitors each year.

#4 are the Maldives-Chagos-Lakshadweep Atolls, Indian Ocean. The largest system of atolls in the world, these reefs are known as important nesting sites for many sea turtle and sea bird species. Further, they claim a large number of endemic coral species.

#3 is Raja Ampat Reef, Indonesia. Comprised of four main islands, these reef systems are regarded as the most biologically diverse on the planet. Here, one can find over 550 species of stony coral and over 1,300 species of fish. In fact, it is believed that many of the larvae that form new reefs across the Pacific originate from this biological hot spot.

#1 is Great Barrier Reef, Australia. This massive structure (over 130,000 square miles) has been called one of “Earth’s great showcases” by J.E.N. Vernon. It takes the top spot here not just on account of its size, but also because of its remoteness; those wishing to explore truly unspoiled areas can certainly find them in certain parts of the Great Barrier Reef, many of which are rather difficult to travel to. Sadly, yet one more reason to place this destination at the top of one’s travel list may be its threatened status; half of this giant reef has already been lost to bleaching and crown-of-thorns starfish plagues, and even the near future of the remaining parts is uncertain. See it while you still can.

For a closer look at the list, visit:
http://www.weather.com/travel/worlds-most-amazing-coral-reefs-20130307