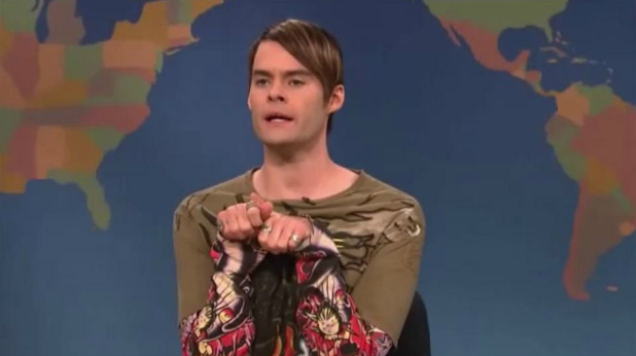 “It’s that thing where a cuttlefish disguises itself as both a male and a female.”

In today’s Cephalopods-Are-The-Coolest-Animals-On-The-Planet News, what scientists refer to as “Tactical Deception” is really not much different from dinner at Lucky Cheng’s.  For those that don’t know what the hell I’m talking about, cuttlefish have been shown to change their coloration to imitate the other sex.  Why?  When several males are all courting a female at once, a male will disguise himself as a female on the side facing the males, and a male on the side facing the females.  The effect is that he can court the female without being interrupted or blocked by another male, while his competitor males actually do their best job to impress him with their colorful displays.  This behavior is of course forbidden by God, and I’m sure the cuttlefish will burn in eternal hell, but despite the efforts of us conservatives they just keep doing it!  Check out the video after the jump.http://www.youtube.com/watch?v=7m0447MiLis