When elegance, performance and simplicity meet: The Vertex Omega 150 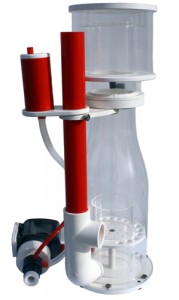 Protein skimmers today come in all shapes and sizes. Standard cone skimmers, oval skimmers, column skimmers, you name it. Skimming has changed a lot over-time. I remember the days when a skimmer was a simple acrylic device, powered by a lime wood air stone. In reality, they functioned well and ignited marine aquarist’s first forays into the world of removing solid organic waste from marine water. Skimming is a vital component of a reef system, especially if you intend to mix a decent fish load with corals and invertebrates. There is plenty of argument on what type of skimmer is best, with dedicated fan boys on all sides of the debate. When I decided to upgrade my existing reef to a larger tank, I decided to upgrade the protein skimmer as well, which brings us to this review of the Vertex Omega 150.

My background in skimming: 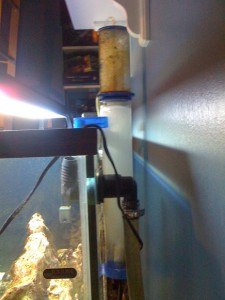 As I mentioned, my start in skimming was with a lime wood air stone powered unit. It was cheap and easy to operate, yet only removed small dark strands of waste. Over the years I’ve encountered many skimmers, from AquaC hang on units, to Reef Octopus in sumps, to Skimz oval skimmers on up to Deltec Cadillacs. I’ve learned a few things about skimmers, one being that simple is better, as less moving parts seem to make life easier during the long haul. Another is that surface area matters, which gives credence to the popularity of oval skimmers. Though one of the main points when judging how a skimmer may, or may not perform is the pump. When you look at all the technology behind skimmers today, the pumps are what often separate the men from the boys. Luckily for Vertex, this is one area where the Omega shines. 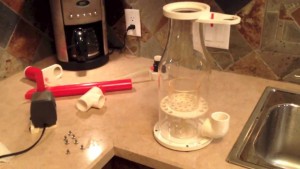 The Omega is perhaps the best constructed skimmer I’ve seen, even compared to Deltec units that are nearly double the cost. It’s sort of a skimming work of art, and upon un-boxing it, I was immediately upset that soon this beautiful piece of equipment would be covered in marine muck. What is unique about the Omega, is that the construction is top notch, but overall the skimmer is very simple. Assembly took minutes, only involving installation of a riser tube, a back plate on the pump and sliding an air silencer over top of the output. The Omega is over 90% ready to run, the minute you remove it from the box and Vertex’s manual is actually well written and very helpful. When looking at the design, it’s clear Vertex opted for simplicity over gimmicks, and instead of an oval or cone, the Omega has a simple wine glass body. The unit certainly has the Vertex feel, which looks like a skimmer designed by Apple likely would. Simple, elegant, yet detailed and refined. 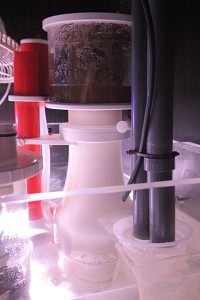 The Omega is truly an in-sump skimmer, and for those of you that like to try to retro-fit in-sump skimmers as external skimmers, I don’t think you will have much luck with the Omega. It’s vital to measure your sump space and make sure the skimmer will fit with a little extra room around the edges. Vertex recommends running the Omega for 24 hours without the collection cup, allowing foam and water to simply overflow. This, according to the manufacturer, helps remove oils and coat the skimmer in film which aids the break-in process. I personally followed that order, and also ran the skimmer an additional 48 hours with the collection cup installed, cap-off, allowing foam and water to overflow into the sump. By the end of that time period, I could see light brown slime accumulating along the edges of the collection cup.

The reason I suggest room around the edges when installing the Vertex is due to the procedure for adjustment. While this may sound like a design disaster, it actually works well and keeps in line with the “simple is better” mentality. To adjust the air/water mixture within the skimmer, which also affects how much foam and water pass through, a white knob at the pump’s intake is turned. I’ve never seen this system in place before, but the only downside is that you have to get your hands wet in the process. Overall, it works quite well and the Omega’s build quality shines through as the knob is sturdy, offering an immediate response in foam/water height. Since the Omega’s optimum operational water height is 7 to 9 inches, you won’t be getting that wet when making adjustments.

To adjust the amount of water in the skimmer body, all which is required is a twist of the red riser tube, just below the air silencer. The riser tube is sliced off at an angle facing the skimmer output, so twisting the riser tube either allows water to freely exit the output, or creates a barrier, thus raising the water level in the skimmer body. Again, it may sound a bit unorthodox, but with the solid construction and easy manipulation, this adjustment mechanism works very well. In fact it’s much easier and faster than turning knobs, with less moving parts that tend to wear out and break over time.

My only complaint about day to day operation of this unit, is the design of the collection cup drain line. Like many skimmers today, the Omega features a built in drain in the event you want to implement an auto waste collector, or simple storage vat for excess skim mate. Instead of using a plug or cap to seal the drain line, Vertex opted for a short piece of tubing with a sealed end. At first glance, it doesn’t seem like a problem. Although, the collection cup on the Omega is threaded, requiring two full rotations to remove. The drain line gets caught on any probe wire or power cord in its way. To make matters worse, the ozone intake on the skimmer is near the drain line, so depending on how your air tubing runs into the ozone intake (if you’re even using that option) the drain line can snag it, pulling it loose. Given the solid design and function of the skimmer, I was surprised that Vertex allowed such a minor design flaw to slip through the cracks. While it is minor, it can be frustrating. Though with a few dollars in parts from the hardware store, a savvy reef aquarist should be able to build a small cap that outperforms the included strand of tubing.

The precise adjustment allows aquarist to decide exactly what type of foam they are looking for. Easily you can tighten the dial, which allows more air into the pump and creates a dry foam, which results in thick, coffee like skim mate. Or simply loosen the dial, and allow less air into the pump to achieve a wetter foam, which creates a light bright skim mate, but pulls waste out faster than dry skimming. The Vertex performs well once broken in, but it’s worth noting that it takes nearly a solid two-weeks before the skimmer starts showing its true colors.

Pump and other features: 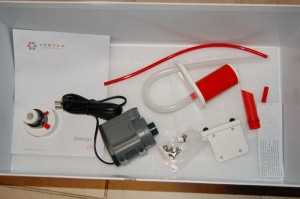 Vertex hired Sicce to design pumps specifically for the Omega. This led to a custom designed needle wheel and volute, what appears at first glance as a minor change, but makes a world of difference. Most skimmers use simple air restriction to adjust the amount of air entering the pump. The Vertex uses an adjustable inlet on the intake of the needle wheel, which accounts for the precise, almost instant adjustment I mentioned earlier. The pump’s ozone intake is worthy of some discussion. For an ozone user like myself, this is of huge benefit. Usually if a skimmer is doubling as an ozone reactor, aquarists have to attach the ozone generator’s output to the skimmer’s air silencer. While this works, it’s not the most elegant way to implement ozone.

The Vertex has a simple piece of red tubing that runs right into the pump. Snap your ozone generator’s output to the tubing and you’re set. Also, the placement of the Omega’s water output makes it easy to fit a carbon bag in front, filtering the ozone from the water immediately as it re-enters the tank. I was able to forgo a bulky and complex ozone reactor in lieu of this simple feature on the Omega, which is certainly a plus.

If you’re looking for a cheap solution to skimming, then you’re likely put off by the Omega’s price. The 150 model (which would likely perform well in tanks up to about 150 gallons) will set you back a bit over $ 400 with shipping. The price for larger skimmers goes up from there, breaking the $ 700 mark at the top. Since the Omega doesn’t have an external, digital pump controller like seen on Skimz oval line (which can be had for the same cost) and a few others, it may seem like an overkill price tag. Reef Octopus has a few skimmers that beat the Vertex in price as well, and I am sure many other manufactures offer units that are cheaper. Though, as I mentioned earlier, the Omega is very well-constructed and the added benefit of a custom designed sicce pump does make a significant difference.

Overall, if you’re in the market for a new skimmer and want something with a little bit more elegance and style than often offered, I would give the Vertex some serious consideration.