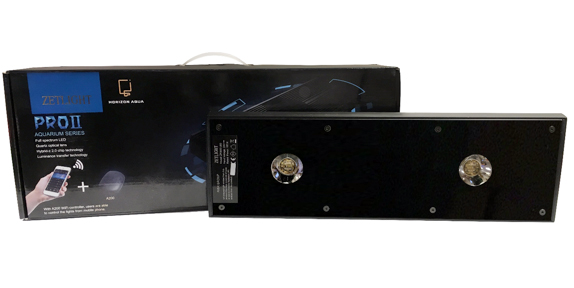 Starting off 2018 with a bang, Zetlight has released an updated version of the ZP-3600 listed under the PRO II Aquarium Series. The ZP-3600 has a beautiful design and build quality it is nothing short of spectacular. This 185W advanced reef light features a full spectrum LED, quartz optical lens, and a Hybrid-Z 2.0 chip (previous 1.0 chip found in the highly praised Zetlight UFO models). The light can also be attached with the hanging kit found in the box or a mounting bracket (sold separately).

Zetlight WiFi Controller Users will have the ability to control the ZP-3600 using the Zetlight A200 WIFI Controller (sold separately – $58.99). Once connected to the A200, users can download the Horizon Aqua app from the Apple App Store (iOS) or Google Play Store (Android) from their smartphone or tablet device.MORE