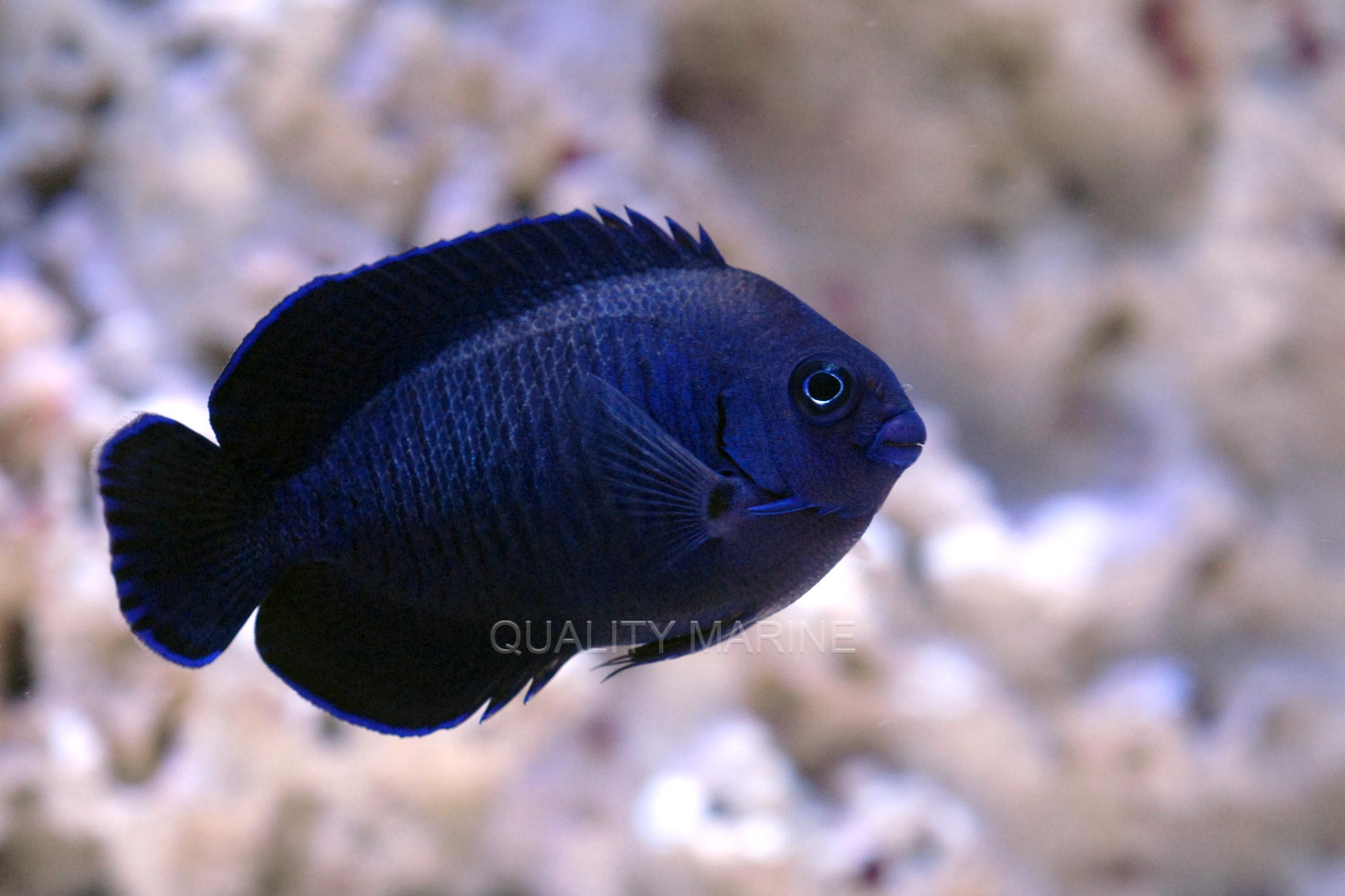 This unusual pygmy angelfish comes courtesy of Quality Marine and was sourced from Fiji… but what is it?

Your first guess might be the endemic Blue Velvet Angelfish (Centropyge deborae). At first glance, the colors seem about right, but a closer inspection reveals that they don’t exactly match up. Check out the posterior margin of the caudal fin and you’ll find that it’s a solid light blue in C. deborae, while our mystery specimen is rocking a pattern of alternating blue and black bands. I’m sure all the pomacanthophiles out there reading along will quickly recognize this as being a distinctive trait found among the subgenus Xiphypops, as well as an assemblage of species that I’ll refer to here as the ex-Centropyge (which includes potteri, bispinosa, loriculus, ferruginata, shepardi, interrupta, joculator, multicolor & nahackyi), though in most of these fishes the banding is limited to the rearmost portions of the dorsal and anal fins.

So why the “ex”, you ask? Was there some bitter angelfish breakup?

Yes, in a sense. We’ve had reason to question the validity of this genus for quite some time now. Richard Pyle’s 2003 study of the family highlighted several of the more salient morphological discrepancies present within this taxon, most notably, a lower number of gill rakers (<20) and an additional dorsal fin spine (14 v. 15) in most of what would be considered the true Centropyge (those more closely related to the type species, C. tibicen). The molecular study of Gaither et al. 2014 confirmed this sharp divide, illustrating that the pygmy angelfishes with a banded caudal margin are probably more closely related to Genicanthus and Apolemichthys. So eventually we can expect some new nomenclature for these fishes… but it hasn’t happened yet. 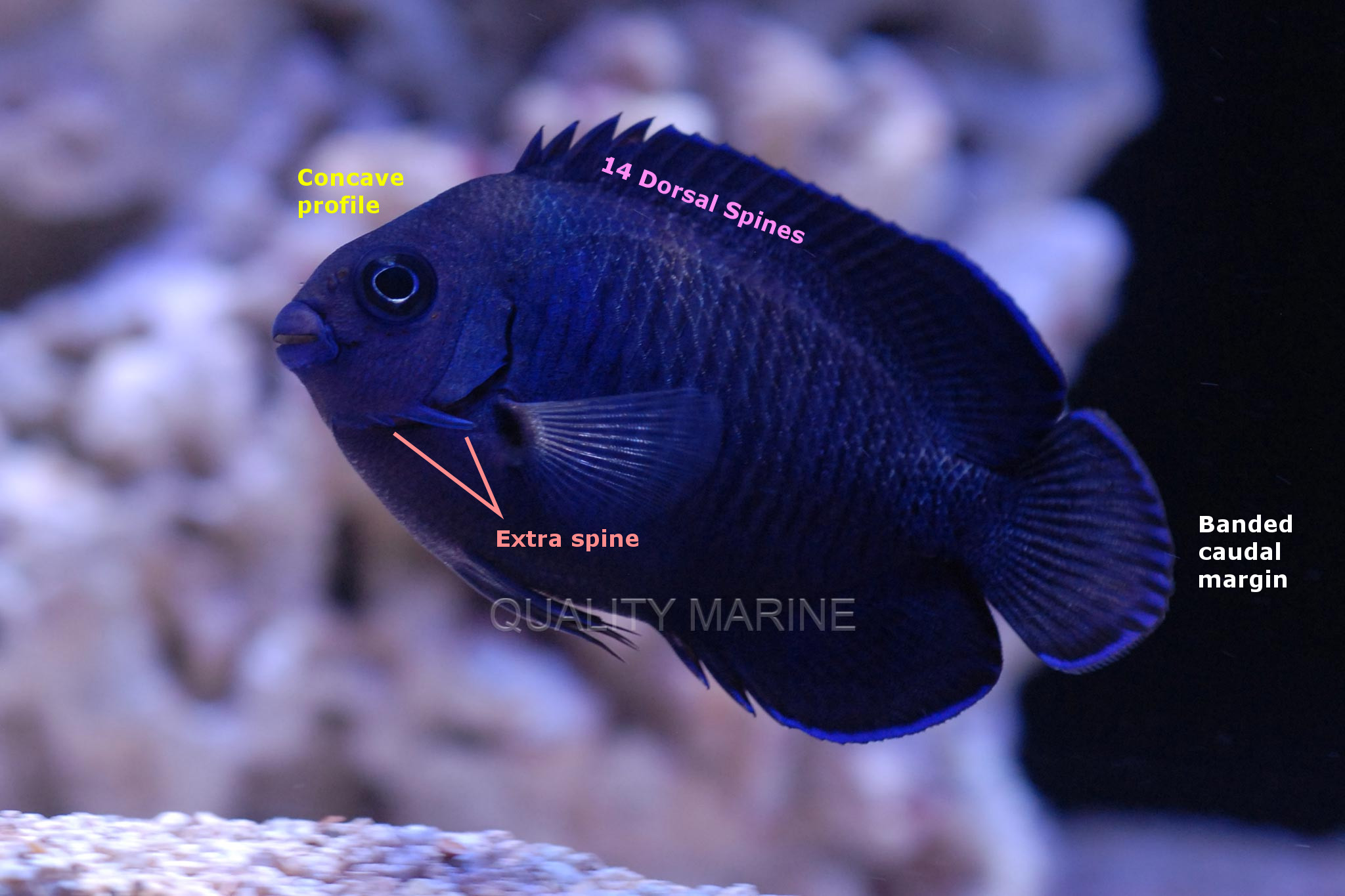 Anyways, getting back to our mystery fish, a quick count reveals there to be 14 dorsal fin spines, confirming what we already knew. The profile of the head is also useful to look at, as the ex-Centropyge tend to have a weak concavity present between the eyes and dorsal fin, almost as if they’ve dented their head on a coral. This allows us to rule our C. deborae, along with the inkier Midnight Angelfish (C. nox), and even the vaguely similar Multispined Angelfish (C. multispinis), though that last one only occurs in the Indian Ocean. So what does that leave us with?

A solid blue morph of the ubiquitous Coral Beauty (Centropyge bispinosa). This species is known to vary dramatically in its coloration, from bright orange to dark blue, like the one seen here. The faint black bars along the sides are a helpful trait to look for (though exceptional specimens can sometimes lack even these markings). Also of note is the presence of a second, smaller spine on the preoperculum; the specific epithet translates as “two spined” for a reason. And, lastly, the clear pectoral fins of C. bispinosa are quite different from C. deborae (dark basally and along the rays) and C. nox (solidly black throughout).