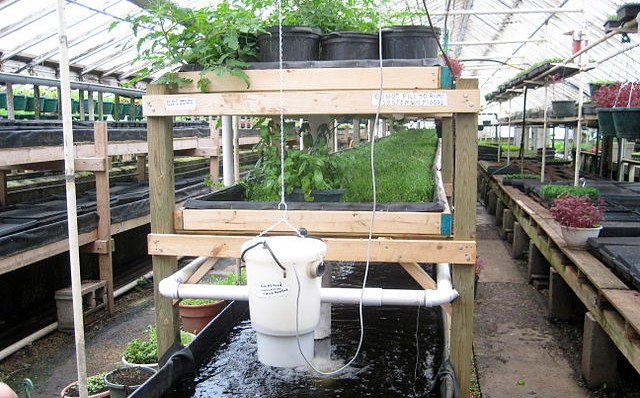 Photo by Ryan Griffis. CC by

Aquaponics is pretty simple in concept. Imagine an aquarium that is plumbed into a hydroponic system; fish wastes are mineralized by microbes and ultimately utilized by the plants as nutrients. Technically speaking, even a mangrove propagule stuck in the back of an overflow box is aquaponic.

The benefits of this type of cultivation are significant. A major attraction for some growers is the ease with which the highly intensive method can be practiced organically. The taste of aquaponic foods (unlike that of hydroponicially grown foods) is said to be as good as its soil grown counterpart. Because there is no soil, pests are far easier to prevent and control.

Aquaponics also dramatically reduces water usage and maintenance. While water exchanges tend to be necessarily massive in some aquaculture systems, in aquaponics they are generally minimal; in some cases, water is only added as top-off. This is, of course, because compounds like nitrate and phosphate are taken up by the growing plants. This method of fertilization is superior to the use of nutrient mixes as in hydroponics, which not only can “burn” plants but also requires re-fertilization and (as in aquaculture) frequent water exchanges.

Although aquaponic operations can have a larger start-up cost and require more expertise to operate, they are a highly efficient means of production over time and consistently produce high quality product. In the near future, cannabis may be one such product.

On account of its its minimal water usage, aquaponics has already gained favor with farmers in drought-prone Colorado. It has been practiced there by many hobby farmers, but has increasingly been used on a commercial scale to produce a variety of cash crops. Then, the state implemented Amendment 64, which permitted the regulated use and manufacture of marijuana. With the state’s farmers’ eyes on the newest and most lucrative crop, cannabis, there is now a great interest in aquaponic cannabis cultivation–so much so that last year a Longmont-based aquaponic supply store began hosting workshops on the subject.

Enthusiasts see the most potential for aquaponics in the production of medical marijuana, where organic production and superior taste (it is reported to lack the “chemical” taste characteristic of much hydroponically grown marijuana) is especially valued. Like most plants, cannabis exhibits a very high rate of vegetative growth in an aquaponic system. However, the all-important process of flowering is more complicated here; aquaponic systems are pretty much incapable of independently supplying the high amounts of phosphorus and potassium needed at this stage. If the necessary quantities of these nutrients are added straight into the culture water, the animals will likely be harmed or killed. Consequently, a handful of growers have developed techniques (usually secret) to selectively add nutrients to the plant directly at its root system. According to some reports, the yield of marijuana grown in this manner is staggering and the quality is superb.

New opportunities for professional aquarists may come with the expansion of this niche industry. Just the same, some hobbyists just might wish to experiment with aquaponics in their home aquaria. It should be noted, however, that the cultivation of cannabis for either personal or medical use remains strictly prohibited in most states.