My Boyfriend Gave Me Crabs 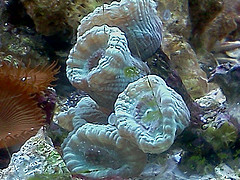 After being in the hobby or industry for a while we become very aware of how much our aquariums will directly impact relationships, particularly concerning significant others. At 28 years old, and 12 years of salt creep under my belt, many relationships have gone by the wayside with several of them being directly correlated to aquaria. “You love your stupid corals more than me!” is a term I’ve had yelled at me more than once. Being the giant reef nerd that I am, perusing various forums is all in a days work for me. I stumbled across this thread a while back and asked the original poster if I could share it with a wider audience. Without further ado, I present “My Boyfriend Gave Me Crabs”:

My Boyfriend has two great loves in his life: his children, and his fish. Ok, so maybe that’s a little exaggerated, because I know he loves me, but I am pretty sure I’m not that far off. For fifteen years my guy has dedicated himself to learning about aquariums, saltwater and reef tanks, fish, corals, and reef conservation. For the last fifteen years, I have…not.

Seeing the warning signs
When Kev and I first met, we did all of our communicating via text messages. I had no idea he was housing numerous species of sea life in his bedroom. There were warning signs though, like when I’d text him after work and he’d say he was hanging out at the fish store. Thankfully, this was not a euphemism for a strip club, though sometimes I think my life would be less stressful if it were. See, while some men spend their free time staring at G-strings or drinking with their “homies”, my guy prefers the company of Gobies, Moniporas, and Wrasses. There was also the fact that when we wanted to get together, he’d say things like, “just gotta drop off a frag first” or, “just gotta check on my tank, then I’ll be there.” I should have known then, but as we didn’t see each other but once a week or less in the beginning, I assumed that I was just catching him on those days that he happened to be working on his tank. Yeah, I was to learn that every day is a day that he happens to be working on his tank.

Planning dates
You know how magazines tout the joy of the spontaneous night out? Those, my friend, are a thing of the past. I made the mistake of planning a night out while my honey was at work one day. I got movie times and planned out a night of romantic dim lit snuggling and yummy eats at one of his favorite places. I got dressed up, which for me means mainly I wasn’t wearing sweatpants, and I did the girlie makeup and hair thing, again something I’m not particularly known for, so that I could treat my man to a night out. I was all giddy with thoughts of romance and canoodling. Then he pulled up in front of my house. In the front seat of his car were three clear baggies that looked like the world’s saddest water balloons. He looked up at me from the driver’s seat with puppy dog eyes and a child’s smile. “I got new frags!” He was bursting to enlighten me about the intricate and stunning details of his new corals. He was looking to me to approve and fawn over his latest find. All I could think was: there go my plans for the night. The look of hopeful anticipation and youthful joy was too much for me, so of course I dutifully inspected each bag as he described each new treasure (and since I’m sure you’re reading this babe, yes, they were beautiful). He, noticing my lack of initial enthusiasm, asked if I was upset. I informed him of my plans, and he was quick to say that he was more than happy to keep them, but then he added this fatal line, “I just have to acclimate these to the tank first.” And my plans were ruined. 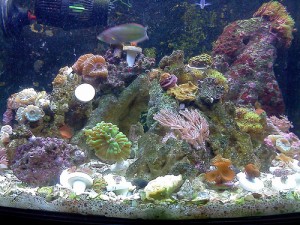 Giving and receiving gifts
We’d been dating for about four months when Kev brought me what he and any of his fellow enthusiasts would consider a gift that keeps on giving. He brought me a 24gal nano. He set it up in my living room, and was able to immediately add some blue green cromies, green star polyps, xenia, and some zoas as he’d had the tank set up at his house prior to gifting it to me. Over the next few months, he would bring me spontaneous gifts to add to my tank, such as mushrooms, snails, shrimp, and crabs. Never before had I thought that getting crabs from a guy you were dating would be a good thing. I justified it by saying that at least he gave me shrooms first. For my birthday, instead of flowers or jewelry, I received bleeding heart zoas. For Christmas I got cleaner shrimp and a white spot puffer. Flowers came in the form of candy cane corals, and instead of stuffed animals I received acans.
I wanted to respond in kind, giving him gifts that he would love, but though he was and still is always more than willing to teach me about the symbiotic relationships in a reef tank, I was still not knowledgeable enough to trust myself with picking out corals and fish that would do well with his tank chemistry. Instead we’d make an afternoon of it by going to the local aquarium shops together so that he could pick out new additions. I just handed over the cash and enjoyed watching his eyes light up and his mouth form a grin that would put the Cheshire cat to shame.

Witnessing the bond
What I’ve said so far may sound familiar, may sound annoying, or may make dating an enthusiast sound like too much trouble. Before you jump to that conclusion, let me tell you about the character traits I have witnessed because of my boyfriend’s love of this hobby. During a move, he entrusted a family member to transport his fish in her truck. He gave instructions that the fish had to be kept warm so speed was essential. She decided to put the bucket of fish under the heater in her truck and crank it up to full blast…I’d never seen him cry before, but when he saw that the fish he’d cared for, from six months to four years, he sobbed.
Though sometimes it does impede my plans, he is dedicated to the well being of all of the lives in his care. I’ve seen him rescue sick and dying corals from hobbyists who either stop caring or get too busy and nurse them back to health. I have watched him hold a pink stripe hogfish next to the pump in his tank after it had jumped out until it was able to breathe on its own and he knew it would recover, and when he sent me pictures of his Squamipinnis, I didn’t have to delete them from my phone before I let my mom borrow it.

Enhancing your relationship
There are three types of people who date enthusiasts: The first is the one who refuses to try to understand their significant other and therefore will eventually find that it is too much of a strain and leave. Secondly are the ones who learn to tolerate their mate’s passion for this hobby, and roll their eyes at the time and devotion they have, but allow it because they see that it makes them happy. I can appreciate these people, as they show their dedication to their relationship and their loved one, but it can still leave a hole. Thirdly, there are those who not only tolerate, but encourage and take an active part in their partner’s hobby. These are my favorites, and the category that I try to fall into, because to an enthusiast, there is nothing better than finding someone who will share in their passion. Beware though, because admitting any kind of interest can open the flood gates to hours upon hours of discussions on the various types of sps and lps corals, the subtle yet distinct differences between zoas and palys, and the mating habits of brine shrimp.

Kids
When I met his children, it was apparent that their dad had taken the time to teach them about aquariums and help them to develop a love of nature, as well as patience, compassion, and self-control. My daughter loved the tank Kevin got me, and he loved that she loved it. Each time he did a water change, fed the fish, or did any other routine maintenance, my daughter’s curious nature would pull her to him, and he would patiently and lovingly explain what he was doing and why, which led to trips to the local aquarium and my little girl gaining a deeper love and knowledge of the world around her, from geography to chemistry. They were able to bond in a way that was beyond what I could have hoped for, and I found myself with my daughter at the library looking for books on science, marine biology, and reef conservation, and she is only eight. Imagine what she could accomplish.

My conclusions
Though the gifts he gives may not be traditional, they are from his heart, and they mean more to him than flowers and chocolate (and don’t generally lead to an argument about whether or not I am gonna gain too much weight). Though my plans may have to be changed once in a while, I know that what makes him happy is spending time with me and giving me a glimpse into his world, and let’s face it; when it comes to the aquarium hobby, his world is quite beautiful. I have seen, through his passion for marine life and coral preservation, a man with a huge heart for all living things great and small. I have seen that it takes not only a heart for even the smallest copepod, but a head full of intellect and ingenuity. The amount of scientific and mathematical knowledge needed to successfully maintain a healthy tank is astounding, and the patience that is an integral part of aquarium maintenance is something to be commended (think of how patient he’ll be with the kids!).

All in all, dating someone in the hobby can be trying at times, but in the end, it is more than worth it.

Shout out and thanks to Vaporlockv2, aka “Boyfriend” for posting this, and huge shout out to Narfwidget, aka Kristina for this hilarious and oh-so-true piece.