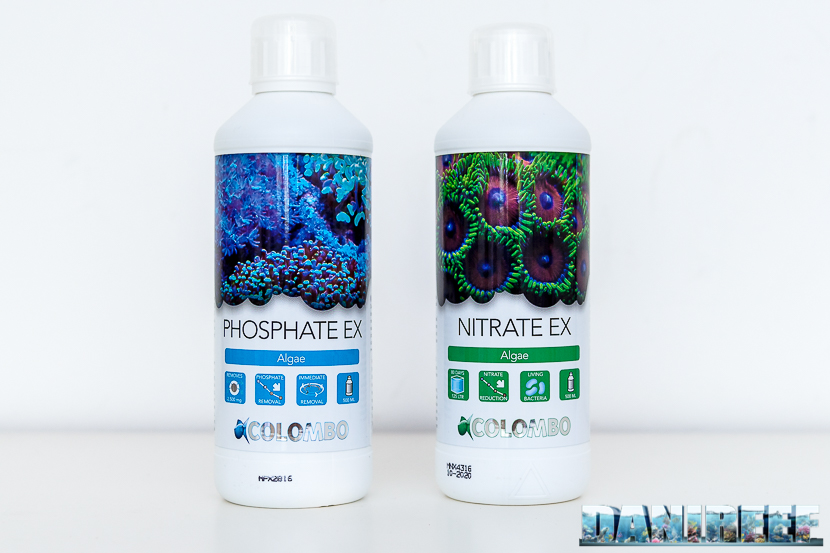 They’re both liquid products sold in either a 500 ml or a 1 liter package. The instructions are extremely easy, they only have to be tested in order to see how they behave in aquarium. I have them but I can’t try in my aquarium because it has the opposite problem: it’s over oxidized, with phosphate and nitrate values undetectable.

Unfortunately, the data we have don’t allow us to understand exactly what is in the two products, but we have some ideas.

Both of the bottles have algae written on them and this is the first effect that stands out due to an excess of these nutrients. There are other problems, of course; with an excess of nitrates the corals lose their color, while with a level of phosphates of 0.3 they stop their growth. Obviously this is an average value, but it’s fairly accurate for the majority of corals.

It has always been said that anti-nitrate resins in marine aquariums have a very limited efficacy. So that’s why, over the last few years, the production has focused on products that feed the bacteria, in order to make them destroy the nitrogen complexes.

And this is the case of Nitrates Ex. A product based on food for bacteria. Notice that the color of the bottle is the same of the nitrate test kit. This visual configuration correlates the problem and its solution and that’s the kind of idea I like very much. 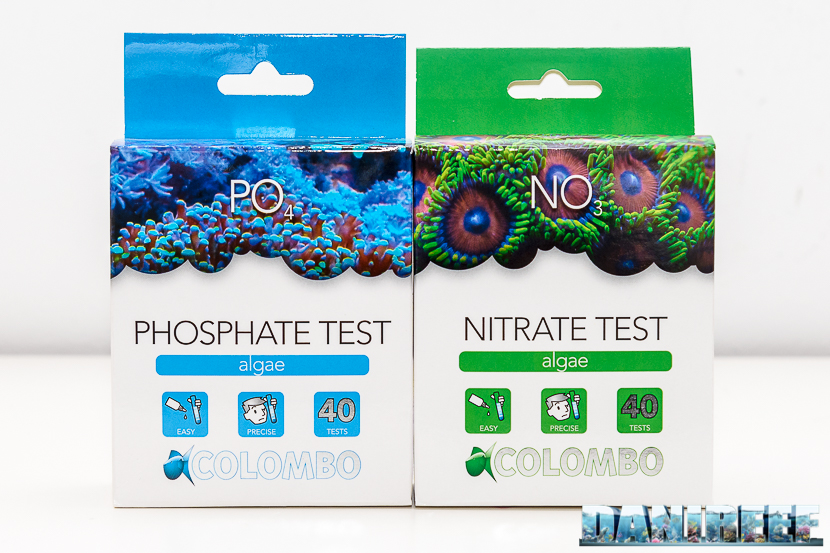 To effectively reduce the nitrates, you need to administer 1 ml of Nitrate Ex for every 20 liters every day. If the nitrate level in aquarium are higher than 20 mg/l you’ll have to double the doses. And you should also reconsider how you’re managing your marine aquarium.

For example, if you have an aquarium of 300 liters and with a nitrate level of 5, you have to administer 15 ml a day. The package of  half a liter will last you  33 days.

The small package costs 12,10 euro, while the bigger one 20,65 euro. You will have a saving of 15% on the liter product. Maybe it’s not enough for choosing the bigger package.

Phosphate reduction is a very common practice in marine aquariums. It’s common to use resins in a fluid bed, even if it’s not ideal. Colombo suggests a liquid solution, much easier to use.

To eliminate 5 mg of phosphates you need to dose 1 ml of Phosphate Ex. You shouldn’t remove more than 0.5 mg/l of phosphates a day. Colombo warns not to go under 0.05 mg/l, too.

So, if you have, for example, a 300 liter marine aquarium with a phosphate level of 06, and you want to decrease it to 0.1, you should do these simple calculations:

According to the instructions, the phosphates will decrease almost immediately. I suggest you dose the product in the sump to avoid any contact with the animals, even if there shouldn’t be any side effect. Be careful: the administration of Phosphate Ex causes an important pH decrease, so you have to dose it with a Kh of 8 at least.

The small package costs 14,55 euro, and the bigger one 21,85 euro. You’ll save 25% on a liter of product. More than enough, in this case, to choose the bigger package.