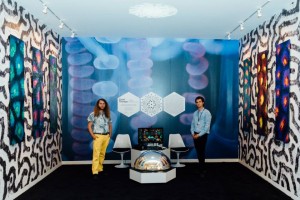 Coral Morphologic is at it again in this time premiering their new film in a custom designed room at DesignMiami/ 2014. They’ve taken it to the next level making this film viewable on the Oculus Rift lending a 360° virtual reality experience to visitors. The room alone would be something to experience, and I have to imagine the film they created is nothing short of amazing.

Here’s what Coral Morphologic had to say about the release of ‘Coral Therapy’: 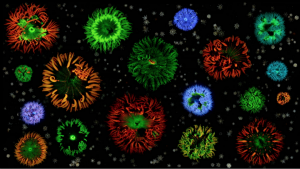 “For Design Miami/ 2014, we were honored to be asked to create a conceptual room in which we debuted ‘Coral Therapy’, a 360-degree virtual reality film experienced via the Oculus Rift. When viewing ‘Coral Therapy’, the viewer is enveloped by fluorescent corals and sea anemones; much like being inside a virtual planetarium theater. ‘Coral Therapy’ is designed to convey a virtual out-of-body experience in which the viewer is transported to a tranquil tropical reef in outer-space. An original ambient score enhances the cosmic coral perspective while accentuating the peaceful and relaxing experience. 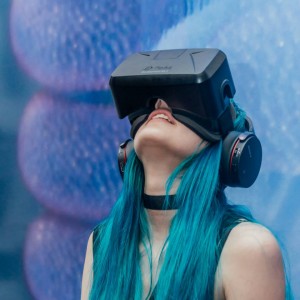 The Oculus Rift is not yet commercially available to consumers, so for Design Miami/ we utilized a developer’s kit prototype. When the commercial version is released in 2015, ‘Coral Therapy’ will be available to be purchased and experienced in high-definition resolution.

Our Curio was developed in collaboration with George Christopher Echevarria aka Flying Pyramids, a Miami-based photographer and graphic designer. The walls featured innovative magnetic wallpaper installed by Visual Magnetics. The back wallpaper displayed a single macro photograph of the tentacles of a man-o-war, while the side wallpaper was of a brain coral fossil found in Miami Beach’s South Pointe Park. Magnetically overlaid on each of the sidewalls were six different color morphs of a new species of zoanthid soft coral that we discovered here in Miami. A looping film of flower anemones was displayed on the ceiling of the booth from a projector hidden within a mirrored dome that sat upon a hexagonal plinth crafted by Miami Industrial Arts, such that it reflected a full 360 image of the room. 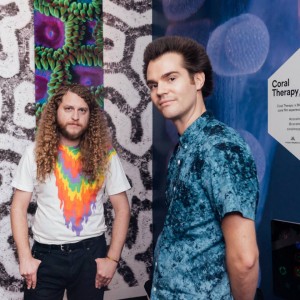 We would like to thank Design Miami/ for inviting us to participate in the tenth edition of their prestigious show, along with the Knight Foundation for supporting our vision of elevating corals into the popular iconography of 21st century Miami as part of our ‘Coral City/Aquacultural Transformation’ project.”

We’re very excited to check out ‘Coral Therapy’ once Oculus Rift becomes available to the masses sometime next year.