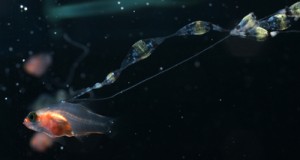 It’s been more than two weeks since I posted news of the first settlement of a Liopropoma bass at the Long Island Aquarium.  I know at least a few of you are eager for an update, but there really hasn’t been anything new to report…until now. 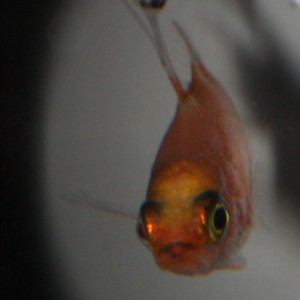 Post-larval bass with a hint of color

At day 69, post-hatch, the first of the remaining larvae from a couple of spawns in late August, settled down to take on its benthic, reef-dwelling life.  Often in marine fishes, settlement is part of a rapid metamorphosis whereby a larva takes on the coloration, shape, and behavior of the adult (or at least the juvenile) almost overnight. If you’ll recall however, the day-69 juvenile from my last post, although taking shelter in a PVC fitting, still retained many larval characteristics, including its filaments, several of the bulbs on its first dorsal filament, and a translucent body with almost no coloration. Aside from several more larvae settling out, little has changed over the past two weeks – until yesterday, that is.  Yesterday morning (day 85), I shined a small LED flashlight into one of the PVC shelters and was rewarded with the most thrilling sight since settlement:  bold horizontal stripes on one of the juveniles. 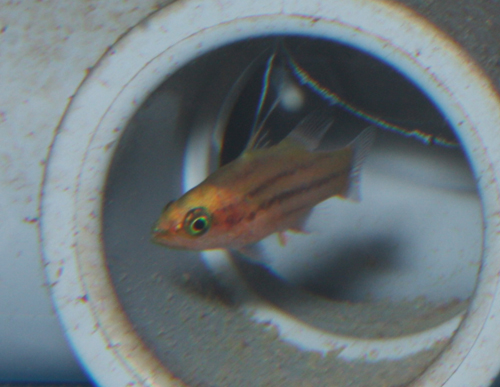 Obviously, it is still not fully colored, but it’s another exciting development and I thought it was worthy of an update. Don’t forget to read the winter issue of Reefs Magazine for all the details of the rearing protocol and a lot more photos and videos.