Aquarium Fish: An Overview of Clownfish of the Clarkii Complex

As anyone with any familiarity of the marine aquarium hobby would know, clownfish (Subfamily Amphiprioninae) are a staple of the ornamental fish trade. The popularity of these fishes has persisted through the years even while the availability of other marine fish species steadily increased. Indeed, with the relatively recent surge of interest in home breeding, clownfish are in as great a demand as ever. Such is the case with the ubiquitous species (Amphiprion percula, Amphiprion frenatus, Premnas biaculeatus, etc.), as well as a few precious rarities. As yet more clownfish species become accessible in the trade, an understanding of the phylogenic and ecological relatedness within the subfamily can serve to establish a useful context for both natural history and aquarium husbandry.

The 28 recognized species of clownfish are divided into six basic assemblages, or complexes. These include the Maroons, the Percula Complex, the Saddleback Complex, the Tomato Complex, the Skunk Complex, and the Clarkii Complex.

Comprised of 11 species, the Clarkii Complex is the largest of these groups. This complex claims the widely distributed Clark’s clownfish (Amphiprion clarkii) as well as a host of similar species. A number of species in the complex are collectively referred to as sebae clownfish; however, the so-called true sebae clownfish is actually a member of the Saddleback Complex.

The Clarkii complex in profile 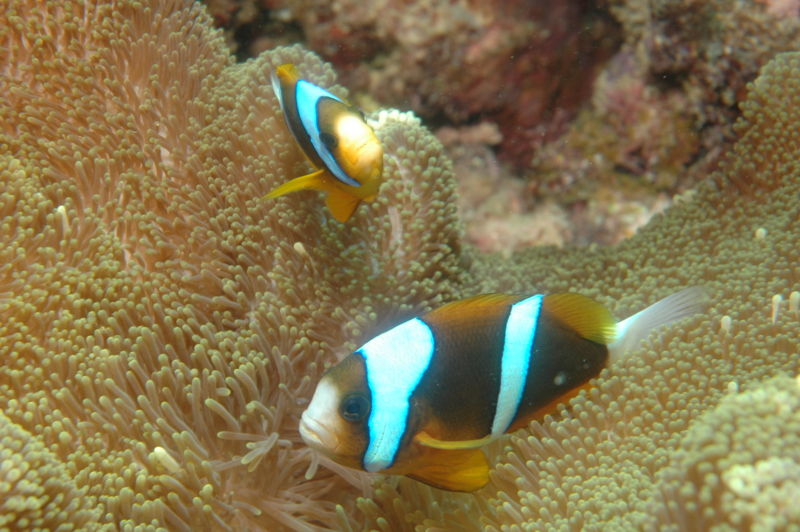 Clownfishes (such as A. akindynos, shown here) may be found across Oceania; there are, however, no Atlantic representatives of the subfamily. Photo by Leonard Low.

The Barrier Reef clownfish is native to Eastern Australia from the Great Barrier Reef to New Caledonia and New South Wales (subtropical). It is typically associated with the sea anemone species Entacmaea quadricolor, Heteractis aurora, Heteractis crispa, Heteractis magnifica. Though it is reasonably hardy in the aquarium, it may initially struggle during the adjustment to captivity. It is distinguishable by its two thin, white bars (though juveniles might have three bands), and a light gray caudle peduncle and tail fin. Males can grow as large as females. It reaches a maximum length of 9 cm. 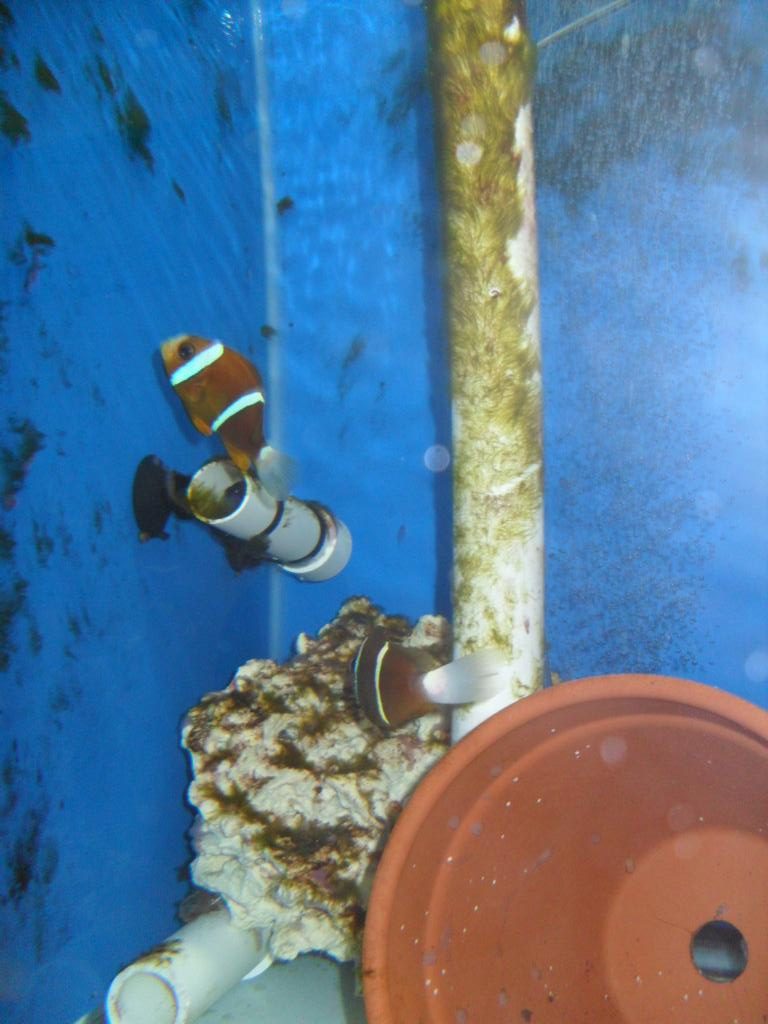 Clownfishes (such as A. akindynos, shown here) may be found across Oceania; there are, however, no Atlantic representatives of the subfamily. Photo by Leonard Low. 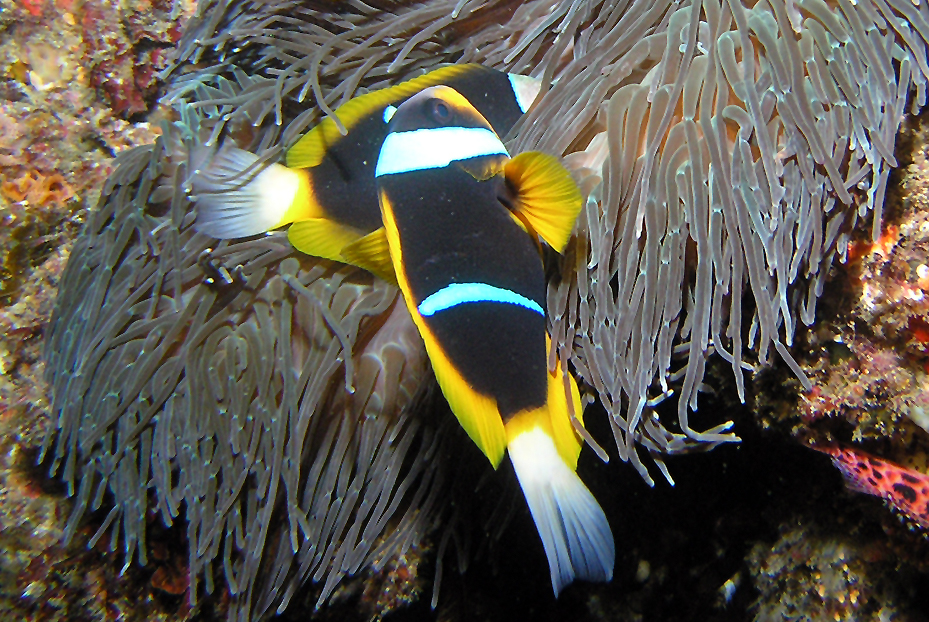 It is believed that clownfishes (such as A. allardi, shown here) produce a mucosal compound that inhibits the discharge of nematocysts from host anemones. Photo by Rob Atherton. 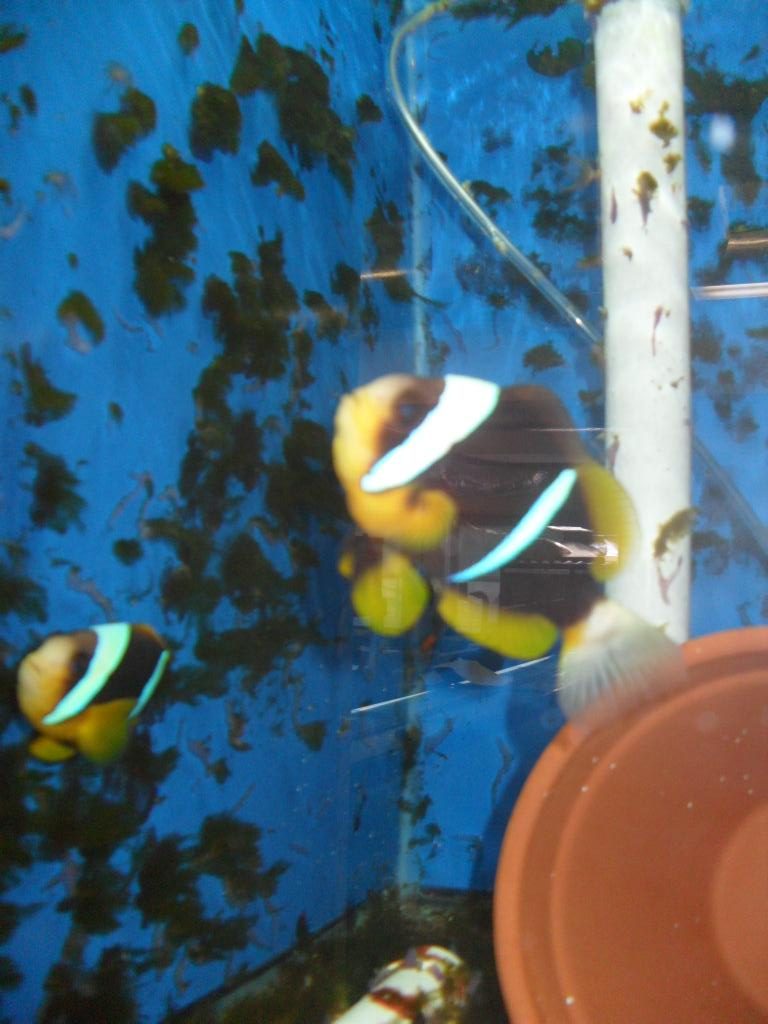 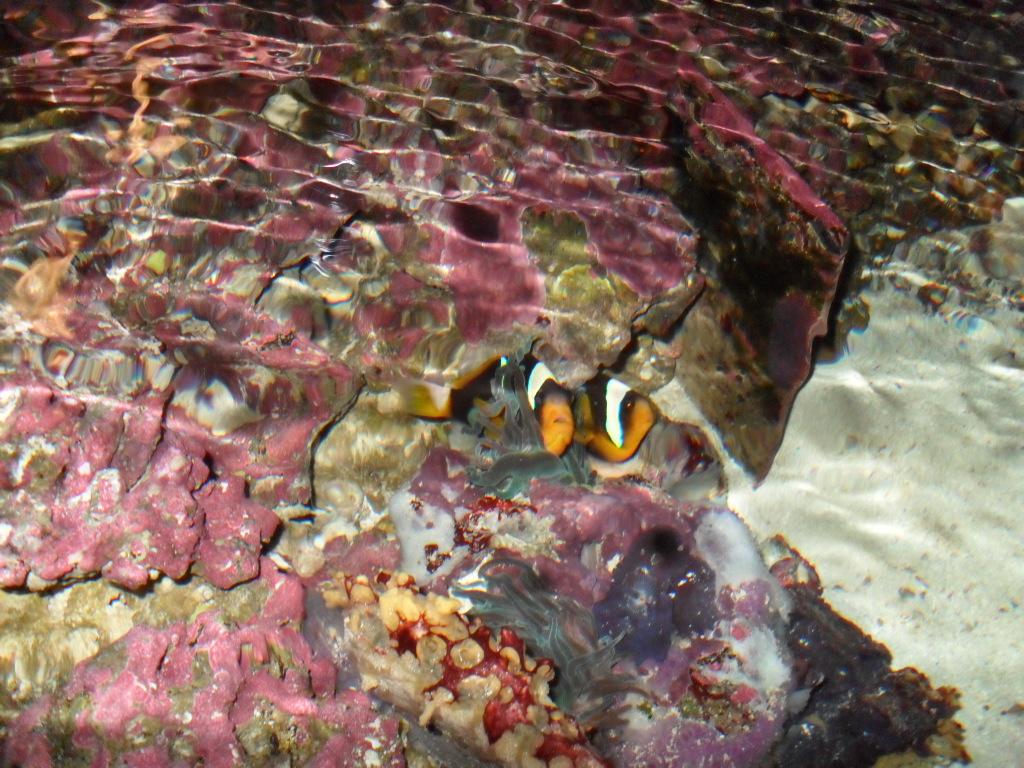 Owing to the efforts of commercial breeders such as Knoxville-based Sustainable Aquatics, less common clownfish species (such as A. allardi, shown here) might be readily available in the near future. Photo by Kenneth Wingerter. 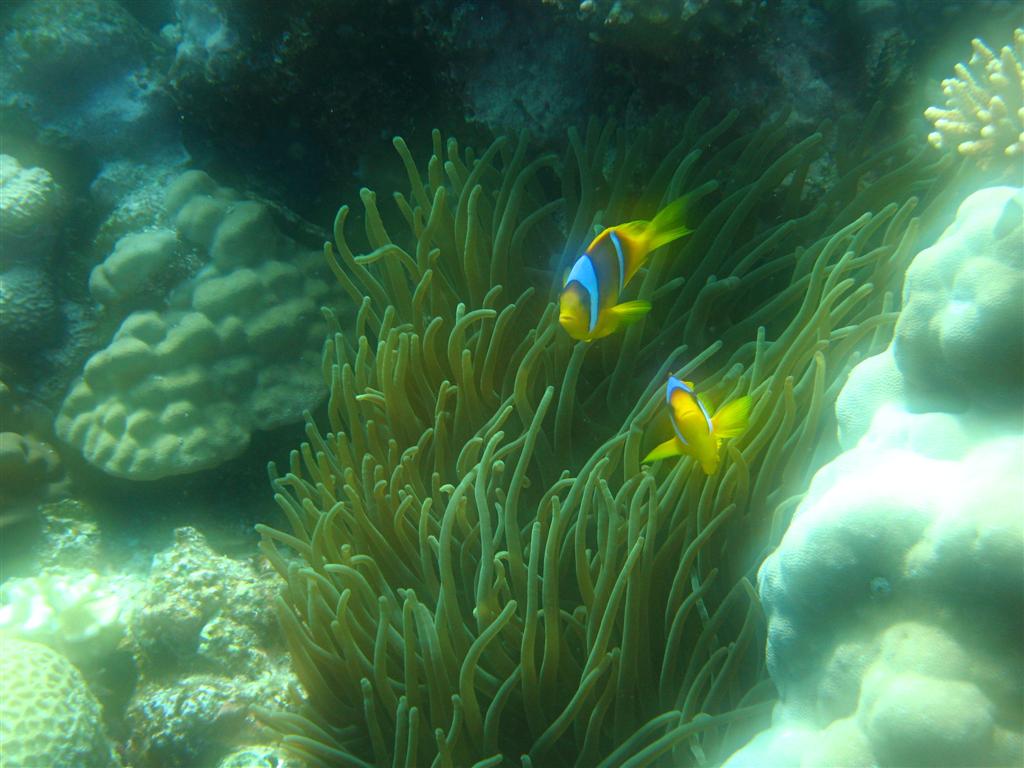 Clownfish (such as these A. bicinctus) are almost never found without a sea anemone host in the wild; fortunately, they may be successfully maintained in captivity in the absence of a host. Photo by J. Hutsch.

The two-banded clownfish is native to the Red Sea, the Gulf of Aden, and the Chagos Archipelago (tropical). It is typically associated with the sea anemone species Entacmaea quadricolor, Heteractis aurora, Heteractis crispa, Heteractis magnifica, and Stichodactyla gigantea. Its coloration varies somewhat, from yellow to pale, earthy shades of brown. It is distinguished its two black-edged, white bands and a completely yellow tail fin. Females grow significantly larger than males, reaching a maximum length of 14 cm. 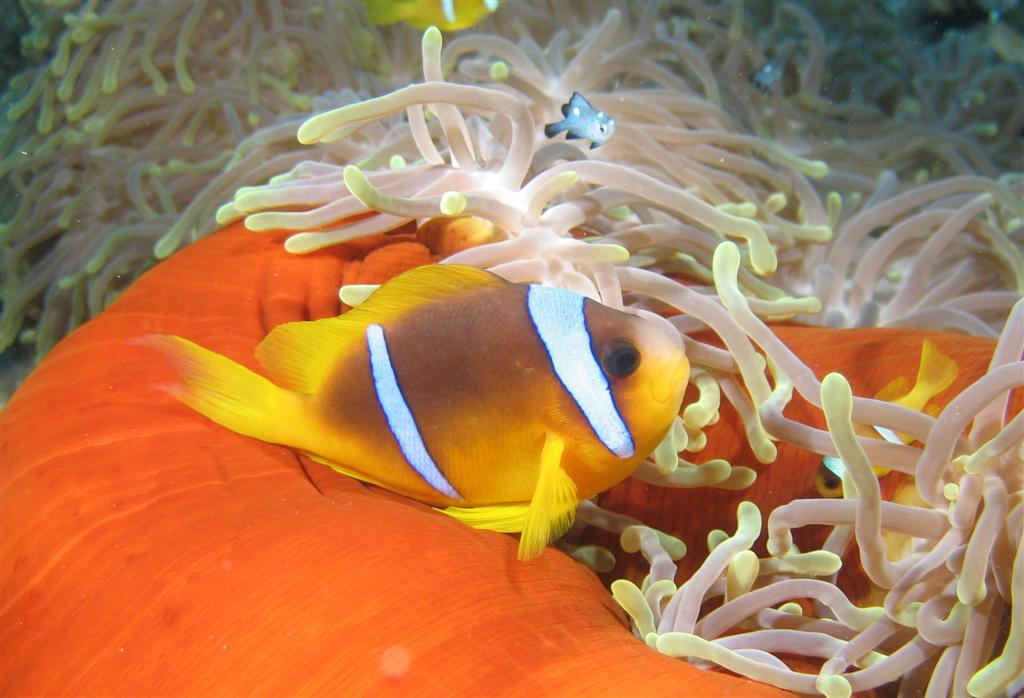 Some species of sea anemone (such as this Heteractis magnifica shown with A. bicinctus) are very difficult to maintain in the typical home aquarium. Photo by Magnus Kjaergaard. 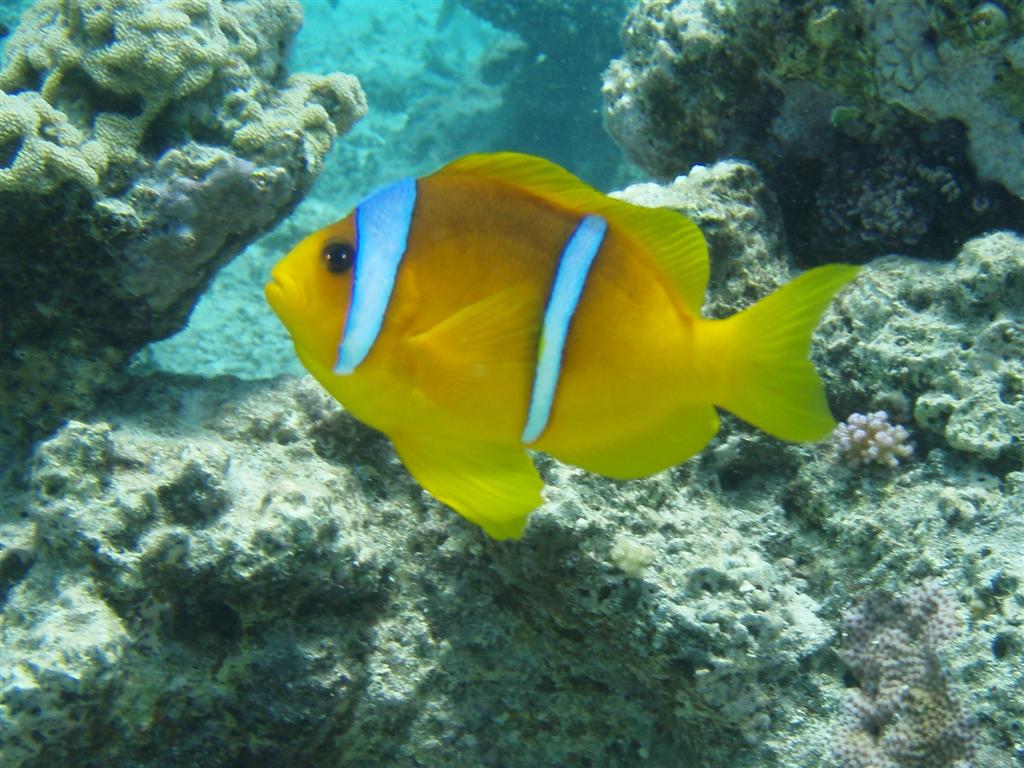 Due in part to increased Red Sea harvests, the availability of A. bicinctus has substantially increased in recent years. Photo by Steren Giannini. 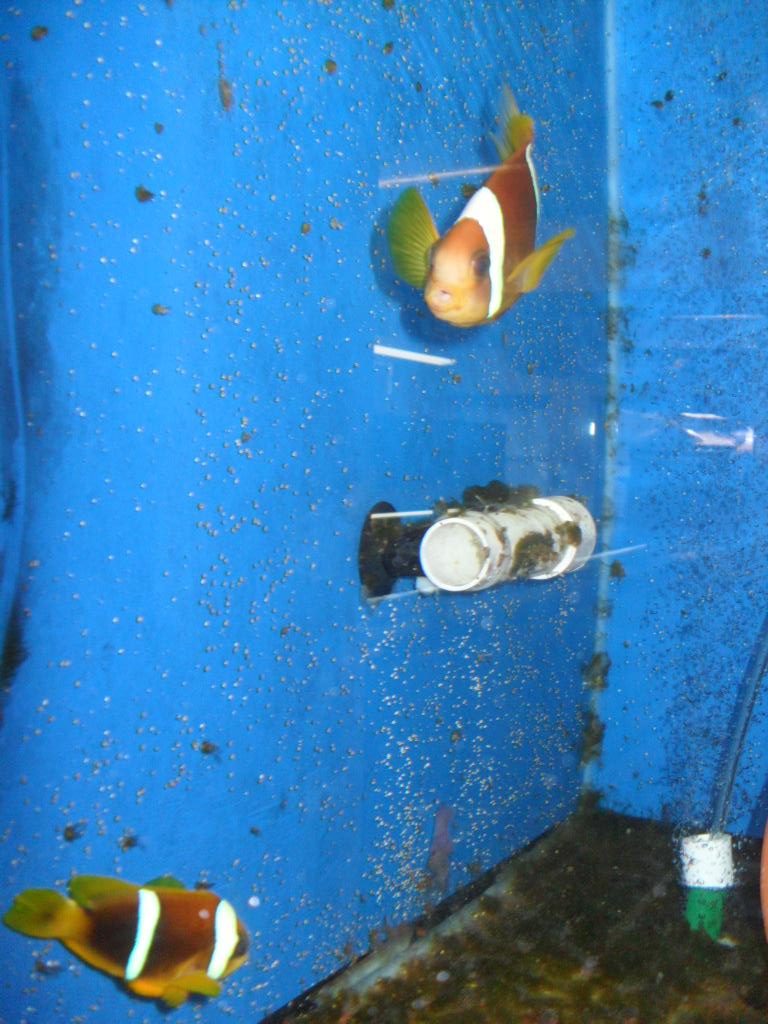 The Chagos clownfish is native to the Western Indian Ocean, restricted mainly to seaward reef slopes in the Chagos Archipelago (tropical). Relatively little is known about the biology of this species. It appears to be associated mainly with Heteractis spp. sea anemones. The Chagos clownfish ranges in coloration between darker and lighter orange-browns. A darker patch may be present on its underside, just where the pelvic fins meet the body. It is distinguished by dark gray pelvic fins and a head band that is thin at the top. It reaches a maximum length of 11 cm. 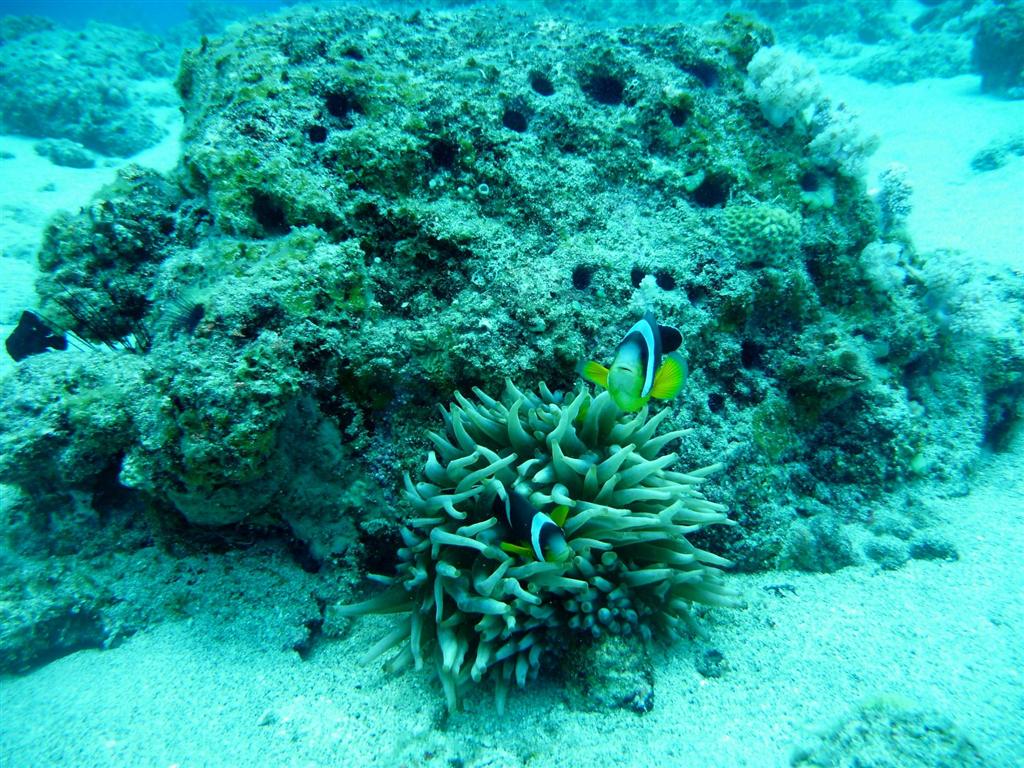 At present, A. chrysogaster is extremely difficult to come by in the trade. Photo by Liné1.

The Mauritian clownfish is native to a region of the Western Indian Ocean encompassing Mauritius (tropical). It is typically associated with the sea anemone species Heteractis aurora, Heteractis magnifica, Macrodactyla doreensis, Stichodactyla haddoni, and Stichodactyla mertensii. It occurs at slightly great depths than most other clownfish species, venturing as deep as 40 m. It is distinguished by having a well-defined tail band, a dark tail, and white edging on the tail and dorsal fin. It grows to a maximum length of 15 cm.

The orange fin clownfish is widely distributed across the Western Pacific Ocean from Australia to New Guinea and the Marshall Islands (tropical). It is typically associated with the sea anemone species Entacmaea quadricolor, Heteractis aurora, Heteractis crispa, Heteractis magnifica, Stichodactyla haddoni, and Stichodactyla mertensii. Crosses of this species with the orange skunk clownfish (Amphiprion sandaracinos) are believed to produce what some call the white-bonnet clownfish (Amphiprion leucokranos Allen, 1973). It can be distinguished not only by its great size, but also by its two electric blue bands and a bright yellow dorsal fin. It is the largest clownfish species, with females reaching a maximum length of 17 cm. 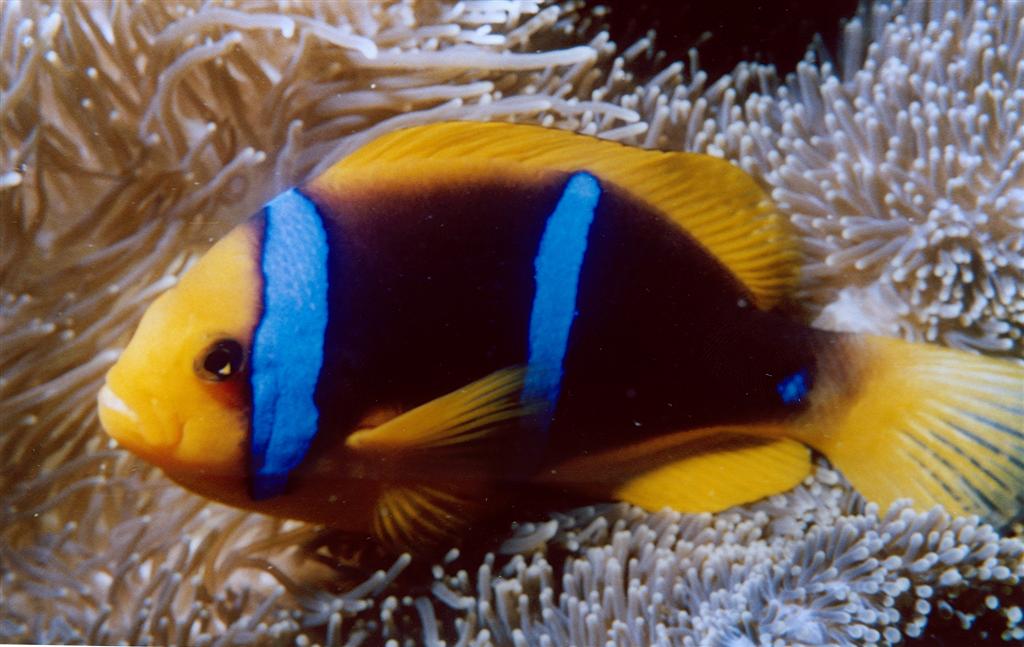 A. chrysopterus is the largest member of the subfamily. Photo by David Burdick. 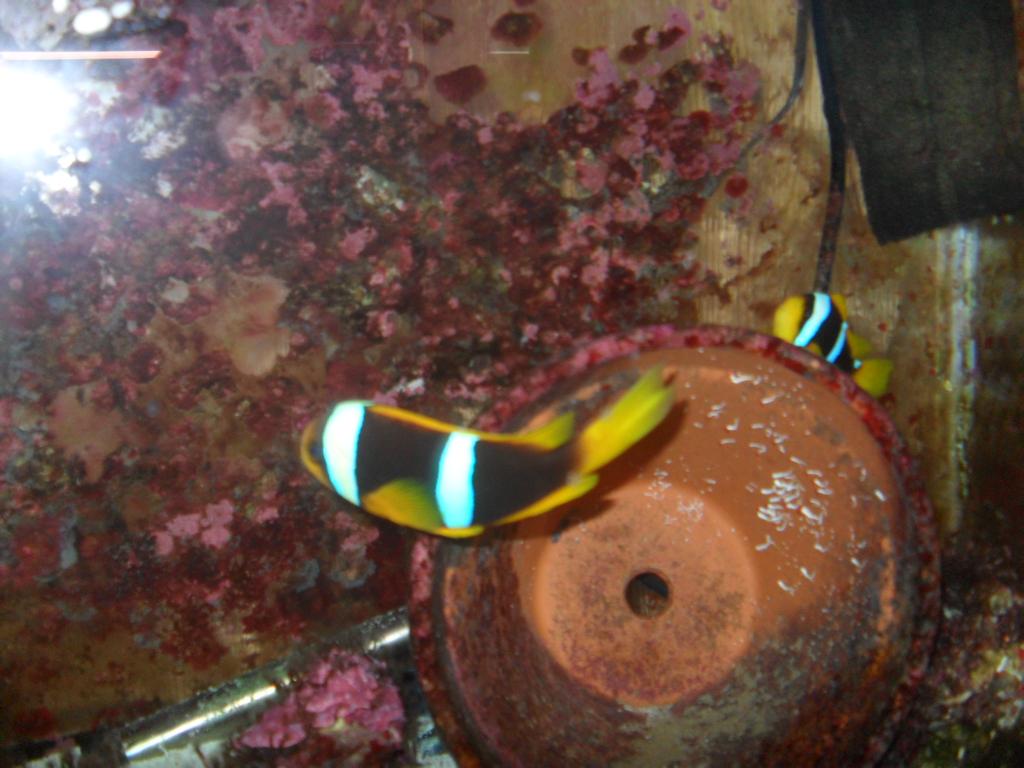 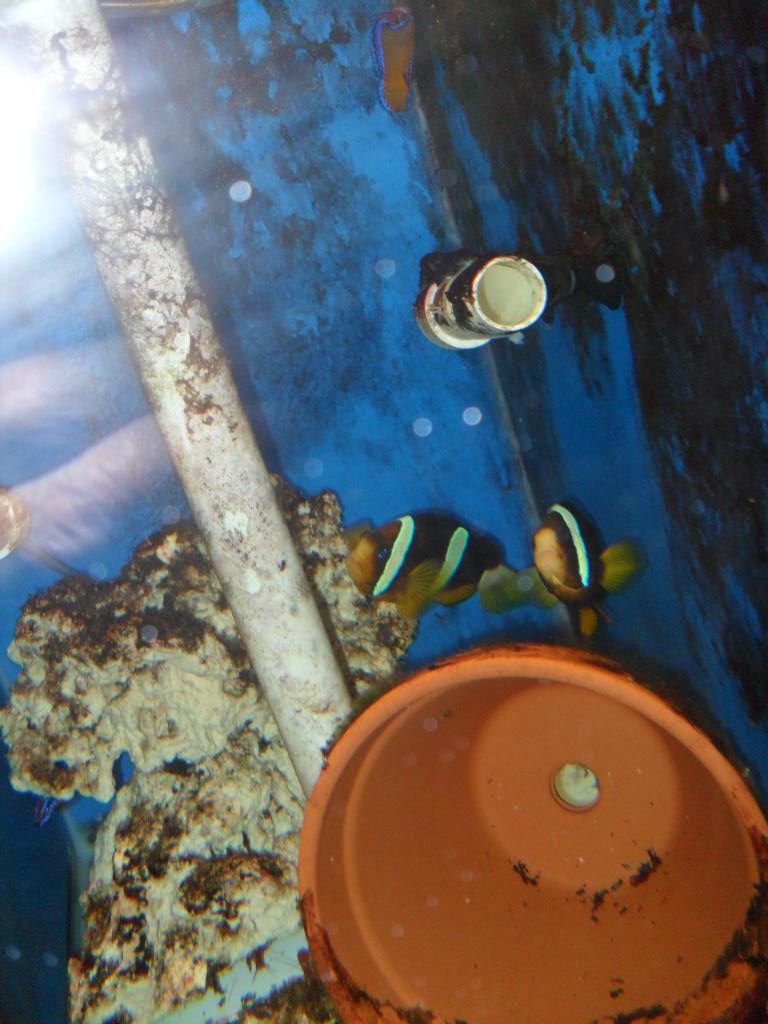 A. clarkii. Photo by Kenneth Wingerter.

Native to much of the Indo-Pacific region (tropical and subtropical), Clark’s clownfish is the most widely distributed member of Amphiprioninae. It is typically associated with the sea anemone speciesCryptodendrum adhaesivum, Entacmaea quadricolor, Heteractis aurora, Heteractis crispa, Heteractis magnifica, Heteractis malu, Macrodactyla doreensis, Stichodactyla gigantea, Stichodactyla haddoni, and Stichodactyla mertensii. It may be found in waters as deep as 60 m. Owing to its wide distribution, its great abundance, and its many similarities to several other clownfishes, Clark’s clownfish is regarded as the type species for the complex (hence the designation, Clarkii Complex). This very hardy species adapts well to captivity and grows quickly. Clark’s clownfish is quite variable in color. The tail can be white to yellowish, but is always paler than the rest of the body. Males of the species are known to change sex even in the presence of another, dominant female; often, when females mature concurrently, they may both pair with the same male. Males and females are similar in size, reaching a maximum length of 15 cm.

A clarkii spawning at the Hatfield Marine Science Center. Video by Kenneth Wingerter. 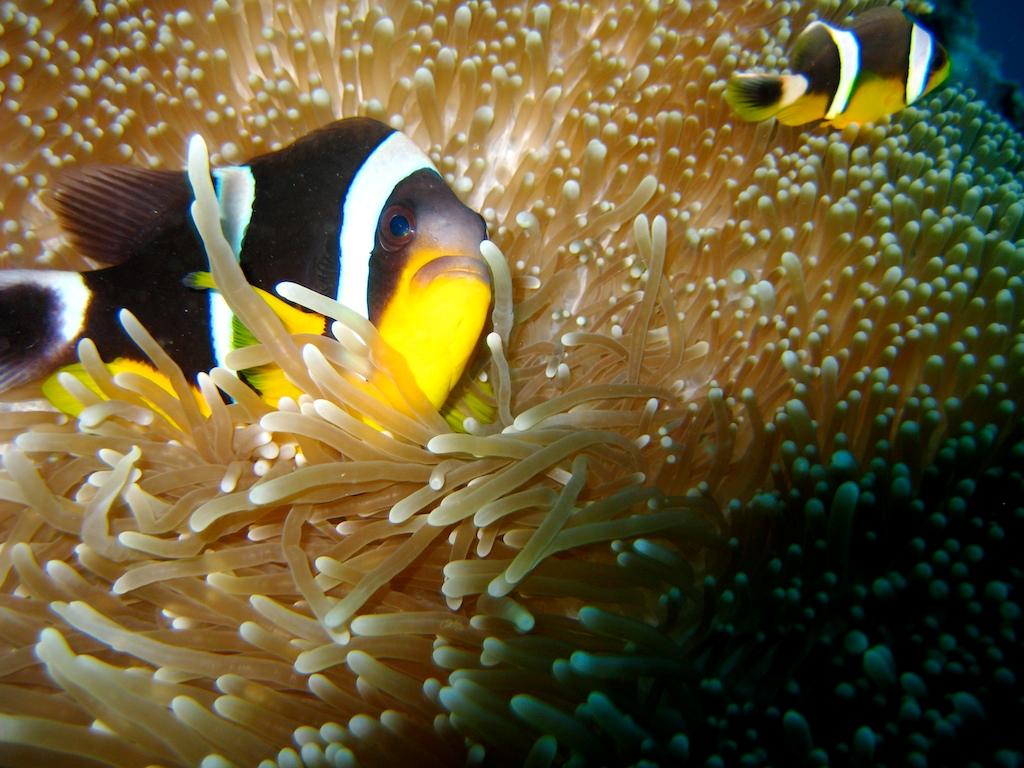 A. fuscocaudatus has a relatively restricted distribution. Photo by Greg Tee.

The Seychelles clownfish is native to the Western Indian Ocean from the Seychelles to Aldabra (tropical). It is typically associated with the sea anemone species Stichodactyla mertensii. This particularly handsome species is distinguished by a very dark gray-brown dorsal fin, face and body, and dark streaks over its tail; the dark upper body contracts starkly with its bright yellow lower fins and belly. It reaches a maximum length of 14 cm. 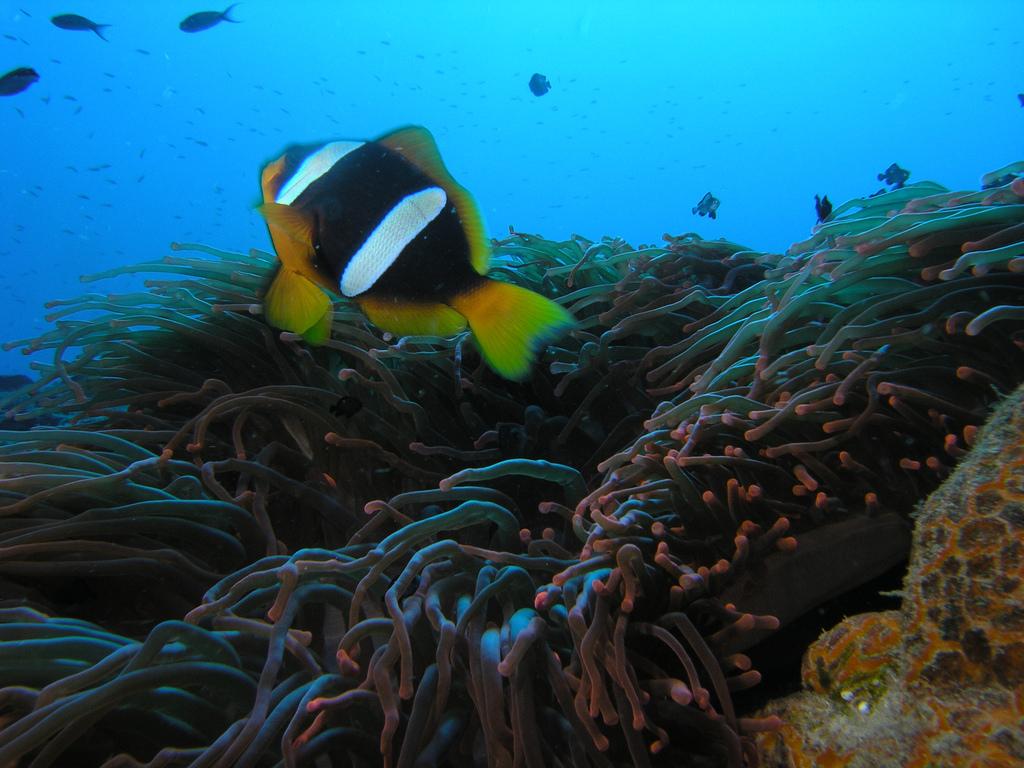 Of the nearly thousand existing species of sea anemones, only about ten are known to be natural clownfish hosts; some clownfishes (such as A. latifasciatus, shown here) can be quite particular about the species they associate with. Photo by alKomor.com.

The Madagascar clownfish is native to shallow reefs of the Western Indian Ocean between Madagascar and Comoros (tropical). It is typically associated with the sea anemone species Stichodactyla mertensii. It has two broad, black-edged bands; there is not even a hint of a band on the caudle peduncle. It is distinguished by its fully yellow, slightly forked tail. It reaches a maximum length of 13 cm.

The Oman clownfish is native to inshore reefs on the Arabian Peninsula near the Persian Gulf (tropical). It has only recently been described, and much remains unknown about this highly sought after clownfish. It is thought to be associated with the sea anemone species Entacmaea quadricolor, Heteractis crispa, and Stichodactyla haddoni. It is distinguished by a deeply forked tail. While the dark tail of juveniles fades with age, the pelvic and anal fins remain quite dark into adulthood. Compared to related species, its midbody bar is markedly narrow. Females are considerably larger than males, reaching a maximum length of 14 cm. 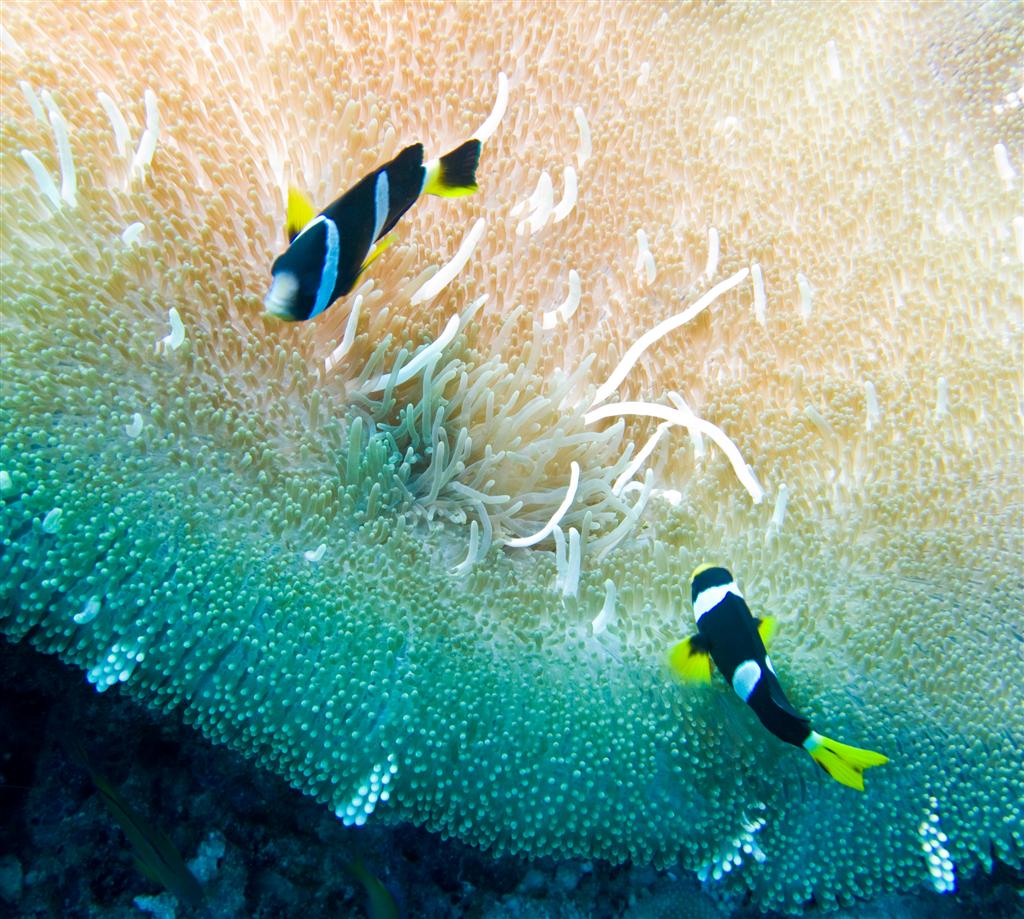 Despite certain superficial similarities, A. sebae, the “true” sebae clownfish, is not a member of the Clarkii Complex. Photo by Miles Wu.

The three-banded clownfish is restricted mainly to somewhat deeper waters around the Marshall Islands (tropical). It is typically associated with the sea anemone species Entacmaea quadricolor, Heteractis aurora, Heteractis crispa, and Stichodactyla mertensii. Its coloration is thought to be dependent upon the species of host sea anemone present. It has three, relatively narrow white stripes. It can be especially similar in appearance to Amphiprion clarkii, from which it may be distinguished by its very dark tail. Females are somewhat larger, growing to a maximum length of 12 cm. 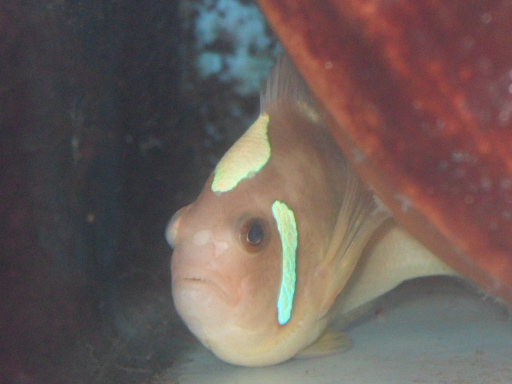 At present, the commercial availability of these fishes ranges from high to very, very low. As demand for the more unusual clownfish species grows, however, they will in due course almost certainly be harvested, bred, and distributed more widely within the trade. Notwithstanding their many similarities, each species in the Clarkii Complex is uniquely interesting and attractive. Equipped with an awareness of the characteristics that distinguish members of the complex from one another, keeping these fishes may perhaps be even more rewarding.

Inside A Coral Lab

Aquarium Invertebrates: A Trip to an Indonesian Coral and Clam Farm