Aquarium Fish: An Overview of Clownfish of the Saddleback Complex

There is a considerable amount of variation within the subfamily Amphiprioninae, the clownfishes. These fishes are customarily divided into five groups, or species complexes. These include (in descending order with respect to number of member species) the Clarkii Complex, the Skunk Complex, the Tomato complex, the Saddleback Complex, the Percula Complex, and the Maroons. Of these, the first three were each discussed in preceding parts of this series. This part will focus on one of the smaller, and certainly lesser known, of these groups, the Saddleback Complex.

The Saddleback Complex has only three member species, namely the wide-band clownfish, the saddleback clownfish, and the sebae clownfish. Each of these bears white bars or stripes; these markings often appear as saddles across their backs. Clownfish of this complex are typically very dark in color, having predominantly brown or black base coloration, perhaps with highlights of yellow and orange. They are somewhat larger and more slender in shape than most other clownfish. Many aquarists seem to agree that there is something about the overall appearance and behavior of these fishes that soundly conveys their delicate nature and exotic provenance.

All things considered, clownfish of this species complex are among the most problematical to maintain in captivity. From the time of purchase, specimens may suffer from trauma associated with acute shipping stress. They are particularly susceptible to ailments and crippling physical conditions (e.g., pop-eye). They are not particularly quick to adapt to life in enclosed spaces; especially at night, movement around the aquarium can send these skittish fishes crashing into the glass panels or even leaping from the tank altogether.

A considerable amount of planning and resources will be required of those who hope to successfully keep, much less breed, fishes of the Saddleback Complex. While it could be said that all new acquisitions should be quarantined prior to introduction into a display, it is certainly wise to allow a period of isolation/adjustment for these fishes. During this period, the animals should be observed often, but disturbed as little as possible.

An emphasis should be placed on the type of enclosure that will be used. Recommended features of aquaria containing fishes from this complex include:

At present, these species are very much underrepresented in the ornamental fish trade. This is due mainly to the locales from which they are collected. In the case of the wide-band clownfish, collectors do not frequent its extreme southerly range (some of which is protected); in the case of the saddleback clownfish and sebae clownfish, collectors tend to pass over the relatively unproductive sandy/silty flats where they mainly occur.

It seems that this vacuum in the trade is being filled by “imposter” fishes; for instance, while there is a ready supply of specimens being offered as Amphiprion sebae, many of these are actually misidentified members of the Clarkii Complex. Particularly because identifications made by dealers are often less than dependable, it can be of great value to the aquarist to be aware of the distinguishing characteristics of each of these species.

The Saddleback Complex in profile 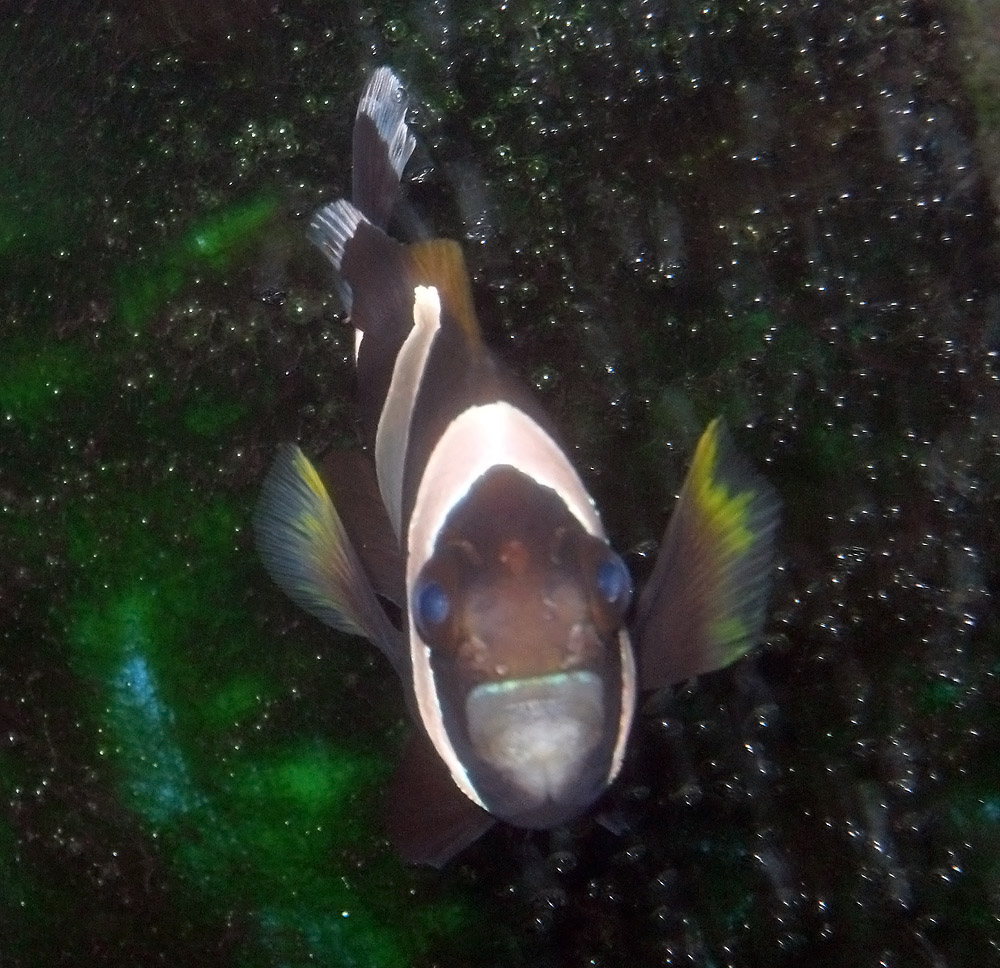 The Wide-band clownfish is found on cooler rocky and coral reefs from the eastern coast of Australia to New Caledonia and the Lord Howe Island group (subtropical). It is typically associated with the sea anemone Heteractis crispa. Wild specimens of this species are rare in the trade, and captive bred specimens are perhaps even rarer. For reasons that are not yet completely clear, captive bred wide-band clownfish are frequently misbarred (a trait which is, at least in the case of this species, generally considered to be undesirable). It is distinguishable by its blue “mustache,” its very dark base color, and its very broad mid-body stripe. It reaches a maximum length of 14 cm. 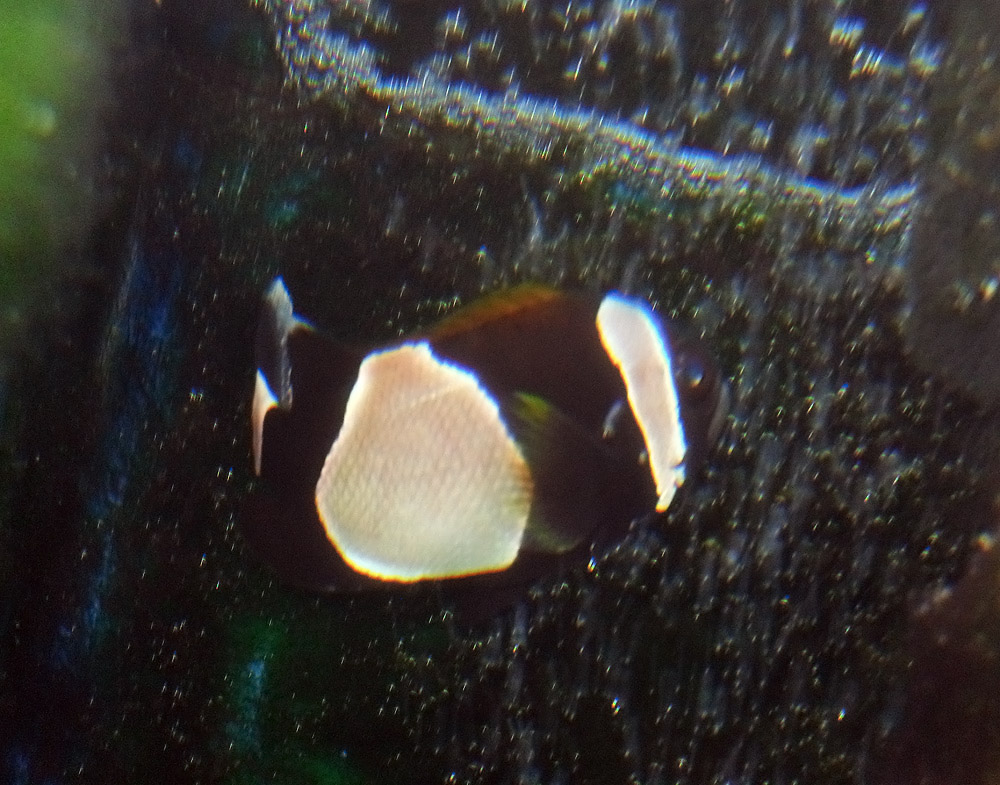 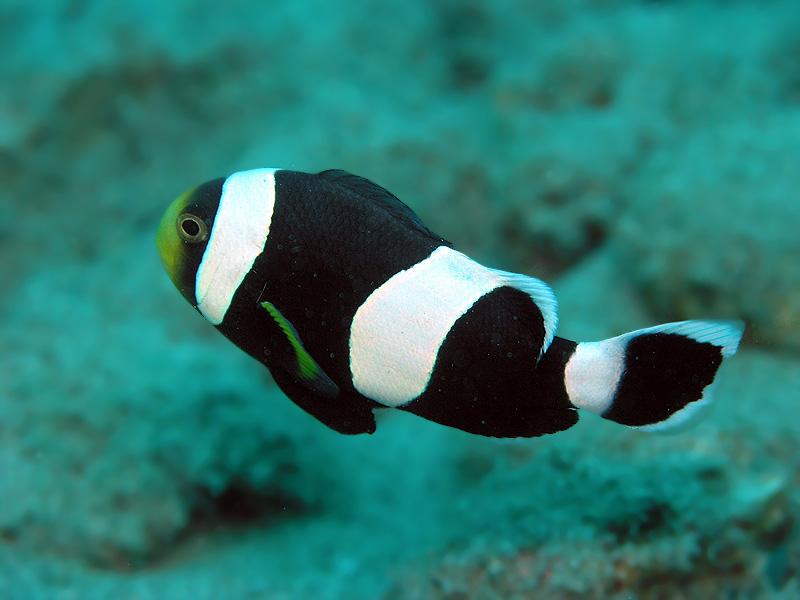 Some varieties of Amphiprion polymnus can darken substantially with age. Photo by Jens Petersen.

The saddleback clownfish occurs in sediment-rich inlets and lagoons from Northern Australia and New Guinea to Southeast Asia (tropical). It is typically associated with the sea anemone species Heteractis crispa and Stichodactyla haddoni. The saddleback clownfish is available in two strains. The “common” strain bears a white head stripe and mid-body stripe (which is usually saddle-like) with a yellow to orange face, pectoral fins, and ventral area. Individuals from New Guinea may have much orange in the ventral area. The “black” strain is very dark-bodied but with bright yellow highlights. Both strains reach a maximum length of 13 cm. 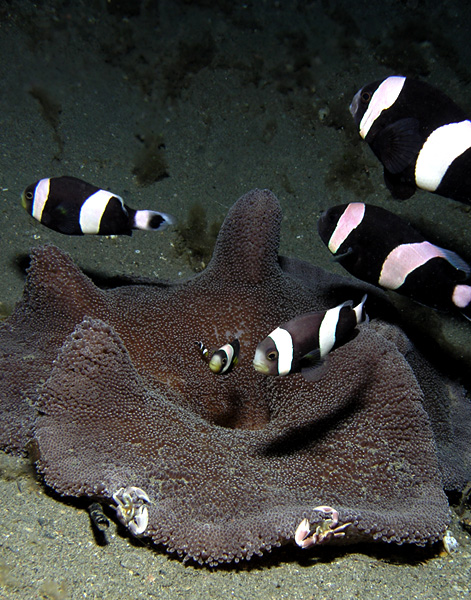 A group of Amphiprion polymnus in East Timor. Photo by Nick Hobgood. 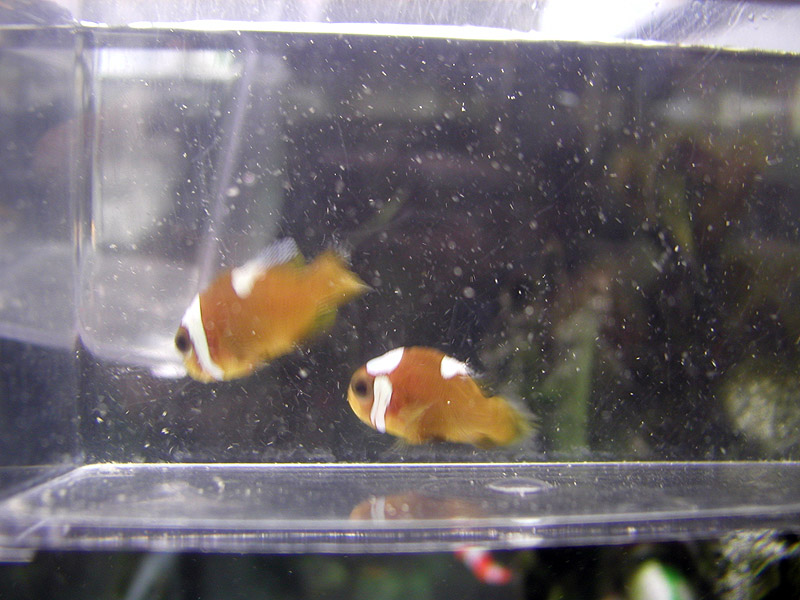 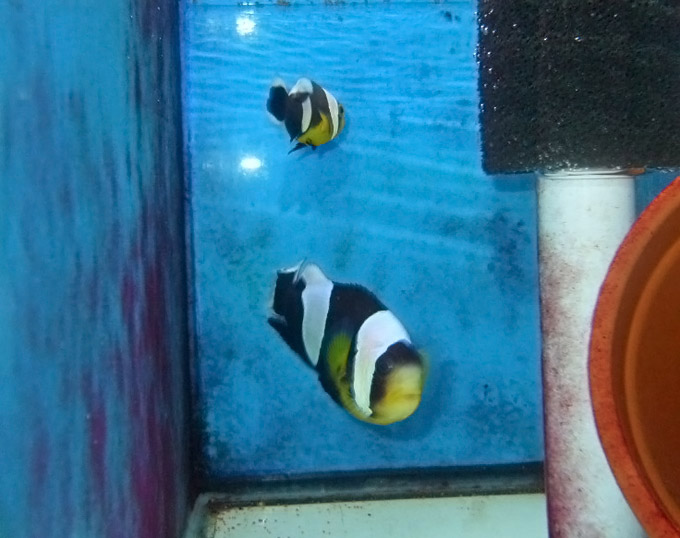 As it is with other members of the subfamily, Saddleback Complex clownfish do not form obligate associations with their sea anemone hosts; they do, however, require plenty of hiding places. Photo by Kenneth Wingerter. 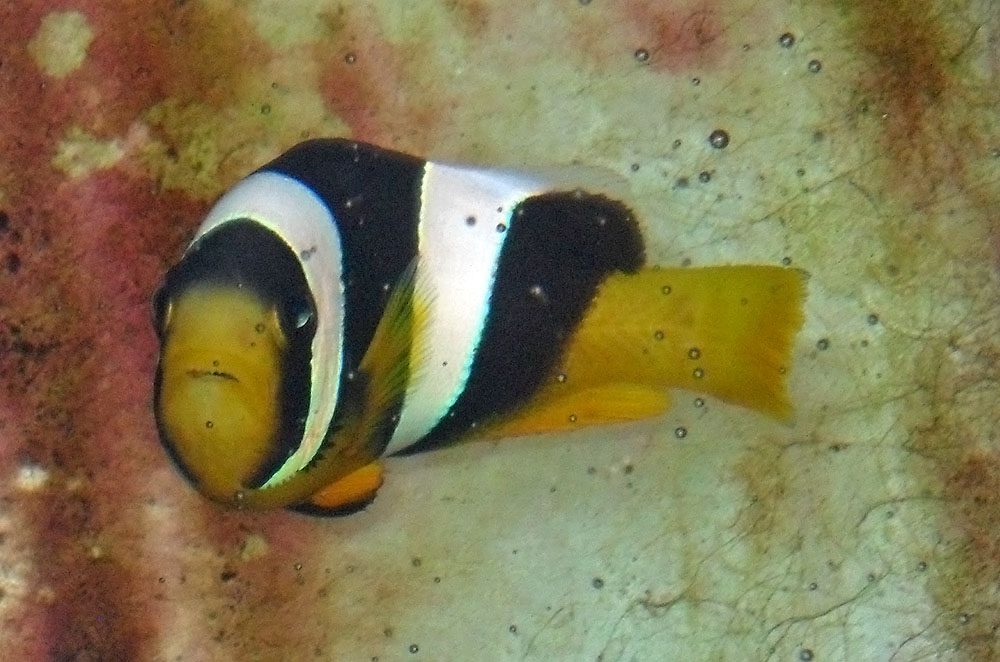 The “true” sebae clownfish is native to shallow waters of the Indian Ocean from the Arabian Peninsula to India and Sri Lanka to parts of Indonesia (tropical). It is typically associated with the sea anemone species Stichodactyla haddoni; interestingly, it is not typically associated with the so-called sebae anemones Heteractis crispaand Heteractis malu. With its saddle-like mid-body band and yellow-orange face and ventral area, it can be quite similar in appearance to Amphiprion polymnus. It is distinguished by having the most and brightest yellow-orange coloration (though specimens from Bali can be quite dark). It is the largest member of the complex, reaching a maximum length of 16 cm.

Members of the Saddleback Complex are among the most challenging species of clownfish to maintain in captivity. A rather high level of care must be reached to ensure (if it can be ensured) the health and wellbeing of these sensitive animals. Generally, attempts to keep these fishes should be undertaken by advanced aquarists (especially so if host anemones are to be kept as well). 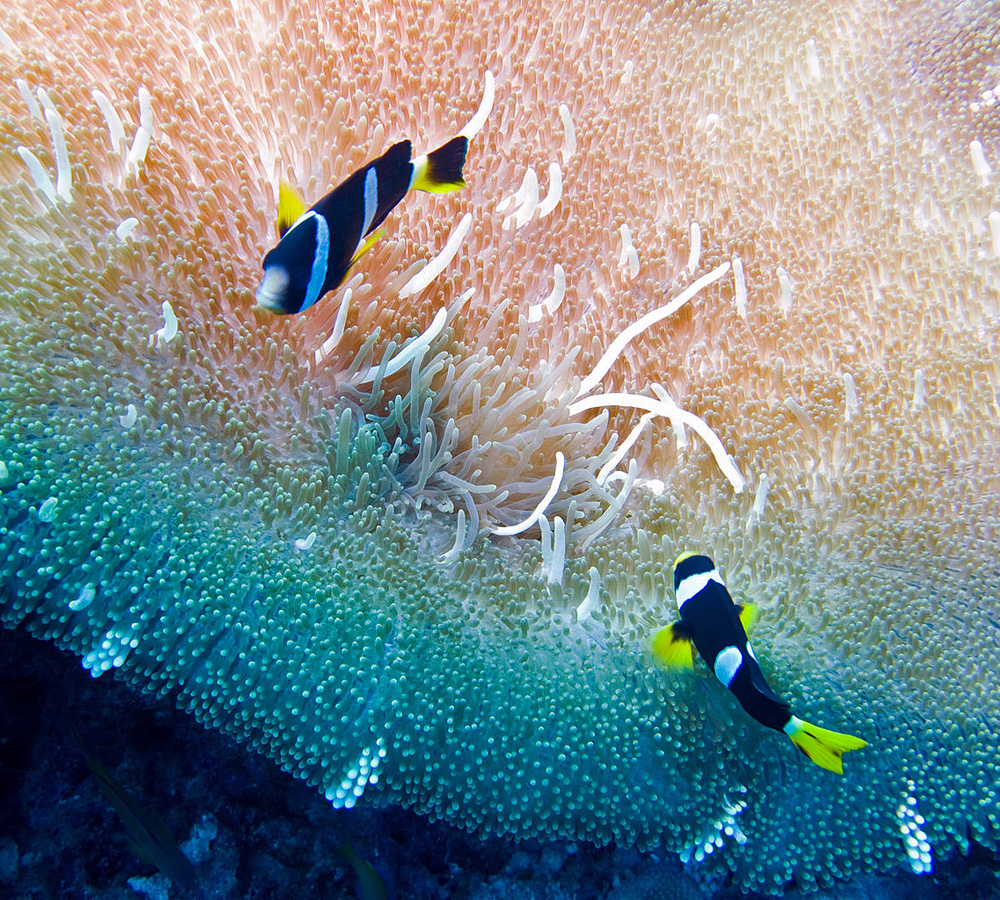 Members of the Clarkii Complex are frequently misidentified as Amphiprion sebae. Photo by Miles Wu.

Properly cared for, the wide-band clownfish, the saddleback clownfish, and the sebae clownfish alike will undoubtedly enhance the beauty and distinctiveness of any marine aquarium display. 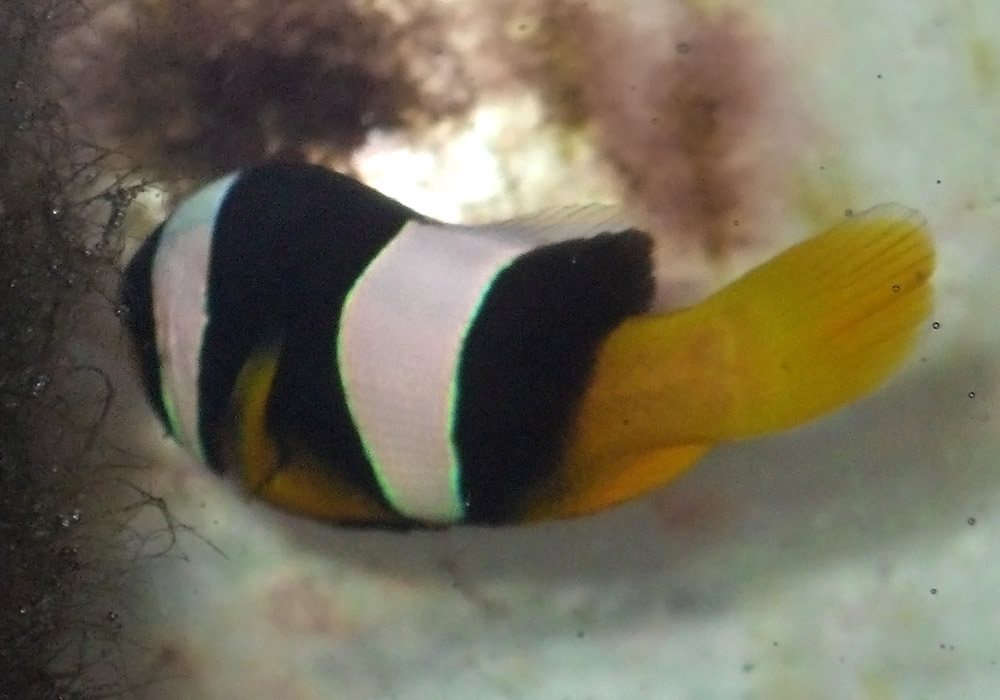