Aquarium Fish: An Overview of Clownfish of the Skunk Complex

The 28 recognized species of clownfish (Subfamily Amphiprioninae) share a considerable number of highly recognizable physical and behavioral attributes. That notwithstanding, they may be divided into basic groups to reflect (presumably on the basis of lineage) certain distinguishing characteristics. These six assemblages, or complexes, include the Maroons, the Percula Complex, the Saddleback Complex, the Tomato Complex, the Skunk Complex, and the Clarkii Complex.

The largest of these groups, the Clarkii Complex, was discussed in a previous article; this piece examines aspects of the next largest group, the Skunk Complex.

The Skunk Complex gets its name from its “type” species, the skunk clownfishes; the common name of the three skunk clownfish species (namely A. akallopisos, A. perideraion, and A. sandaracinos) is derived from the distinctive long, white stripe that runs down the length of their backs. While the dorsal stripe certainly sets these fishes apart from members of the other five complexes in the subfamily, this complex bears numerous distinctions that will be notable to many discerning marine aquarists.

Members of the Skunk Complex are, overall, the smallest representatives (in physical size) of the subfamily. Skunk clownfish are not particularly difficult to maintain in captivity; however, at least compared to certain other familiar clownfish species, they can be quite timid, and so should be afforded with appropriate tankmates and aquascapes. Skunk clownfish should be among the first inhabitants to be stocked into an aquarium. Their living space should include plentiful hiding spots. Brutish or predatory fish species should be excluded as potential cohabitants altogether.

The Skunk Complex is particularly interesting in that two of its members (Amphiprion leucokranos and Amphiprion thiellei) might not actually be legitimate species by conventional classification guidelines, but rather intrageneric hybrids; this issue may be resolved by further field investigation and genetic analysis. 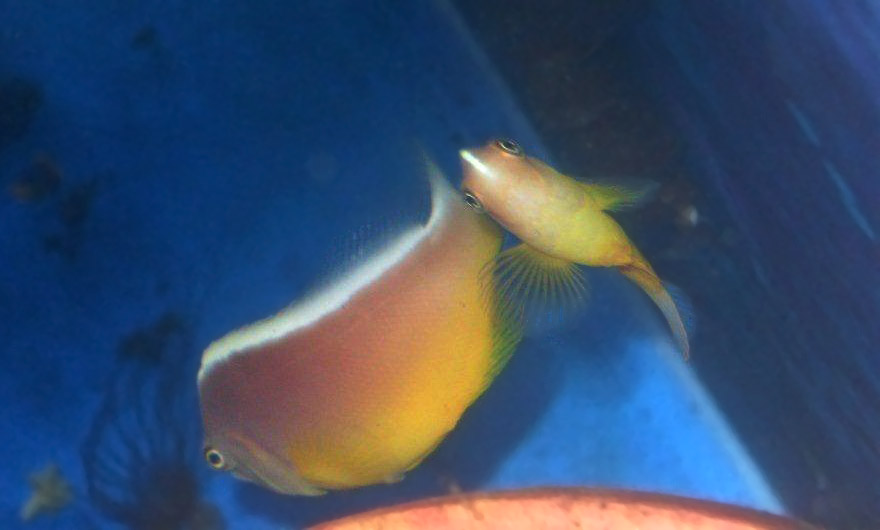 These Amphiprion akallopisos can be distinguished from the closely related Amphiprion sandaracinos by their dorsal stripes, which do not cover their mouths. Photo by Kenneth Wingerter.

The Skunk Complex in profile

The skunk clownfish inhabits shallow inshore reefs throughout the Indo-Pacific Ocean (tropical), often in rather strong currents. It is typically associated with the sea anemone species Heteractis magnifica and Stichodactyla mertensii. It is distinguishable by its rich orange base color, a white tail, an absence of head stripes, and a single, narrow white stripe that runs (starting behind the mouth) down the length of its back. Females are larger than males; mating males are larger than non-mating males. It reaches a maximum length of 11 cm.

The white-bonnet clownfish inhabits lagoons and outer reef slopes throughout the Western Central Pacific Ocean from New Britain to Papua New Guinea and the Solomon Islands (tropical). It is typically associated with the sea anemone species Heteractis crispa, Heteractis magnifica, and Stichodactyla mertensii. It usually bears an incomplete head stripe. While it can be obtained in the trade, it is a rarity that commands top prices. Rather smallish, it reaches a maximum length of 9 cm. 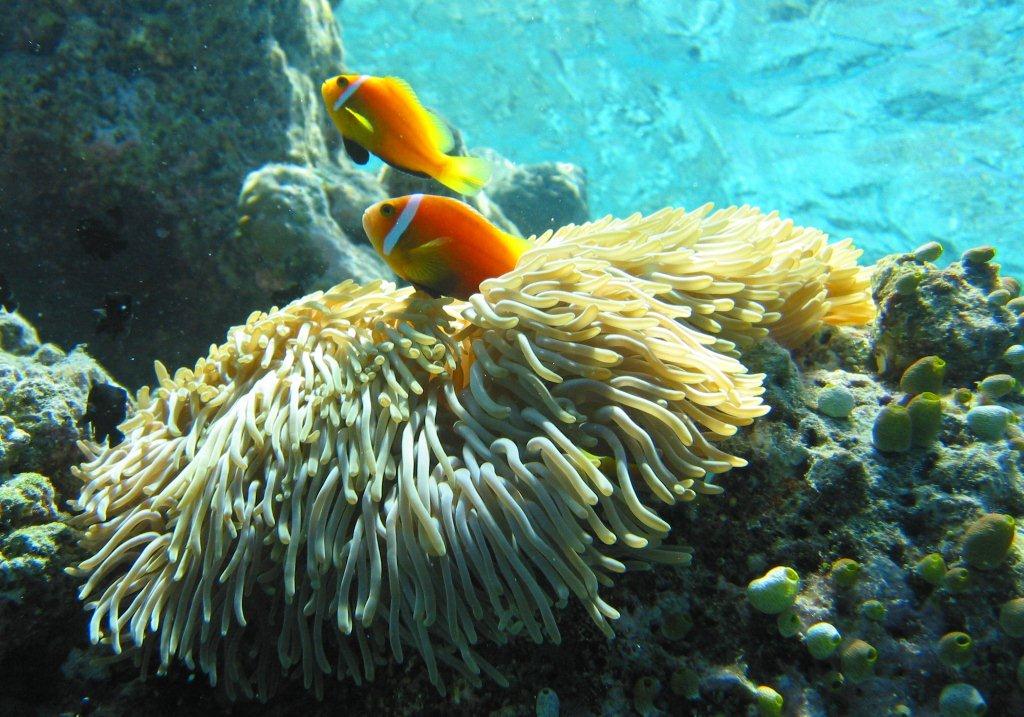 A beautiful reef scene graced by a pair of Amphiprion nigripes. Photo by Jan Derk. 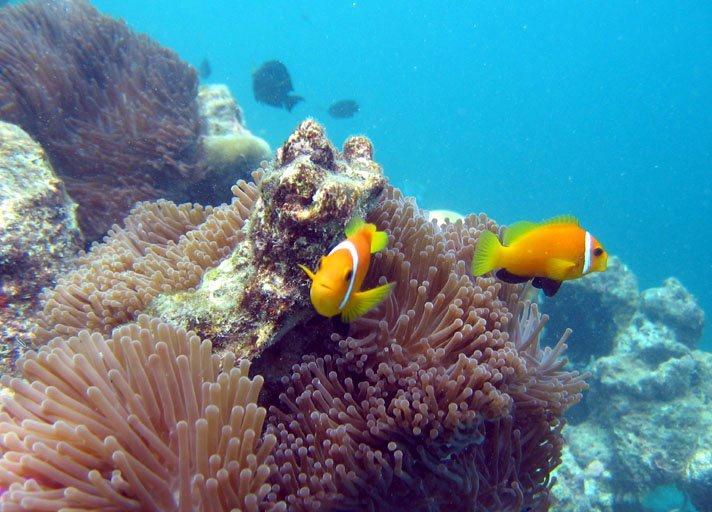 Though its base color is somewhat variable, Amphiprion nigripes always has a darker ventral area. Photo by Ewa Barska. 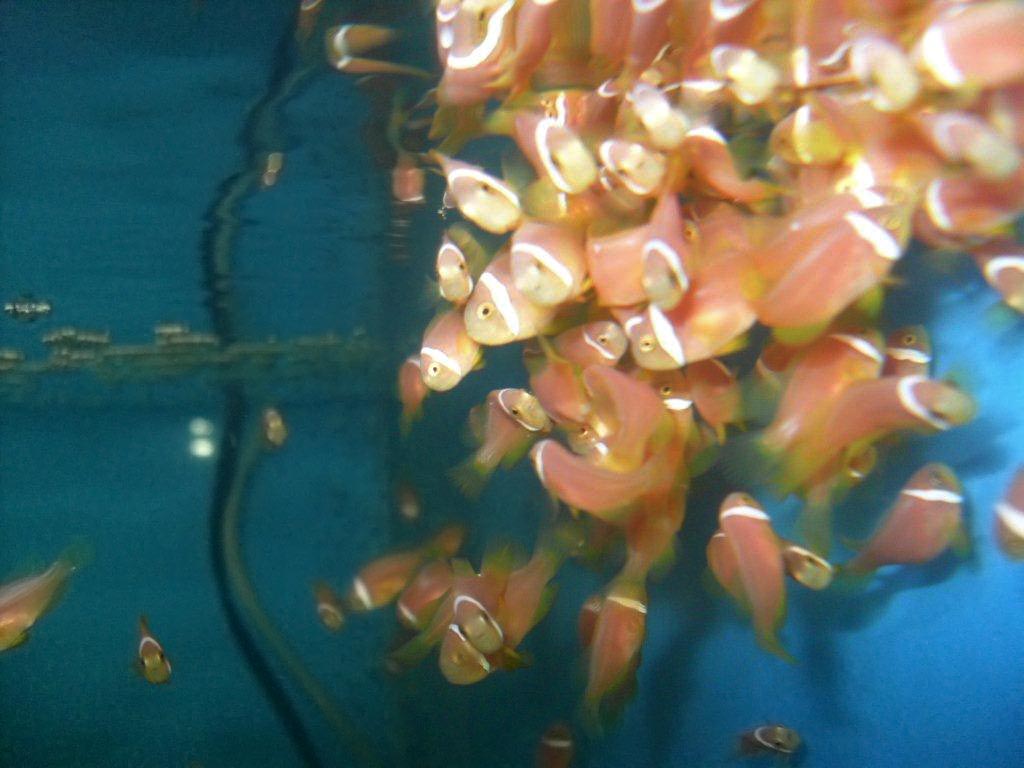 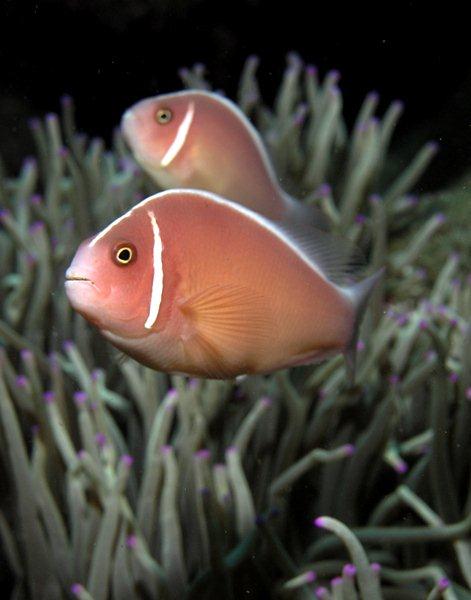 Amphiprion perideraion is probably the hardiest species in the Skunk Complex. Photo by Nick Hobgood.

The pink skunk clownfish can be found across the Western Pacific Ocean (tropical). This adaptable species thrives in a wide range of habitats, including brackish waters, at depths of 1-38 meters. While it is typically associated with the anemone species Heteractis magnifica, it may also occur with Heteractis crispa, Macrodactyla doreensis, and Stichodactyla gigantea. It is distinguished by a pale orange base color, transparent fins, and a thin head stripe. It reaches a maximum length of 10 cm. 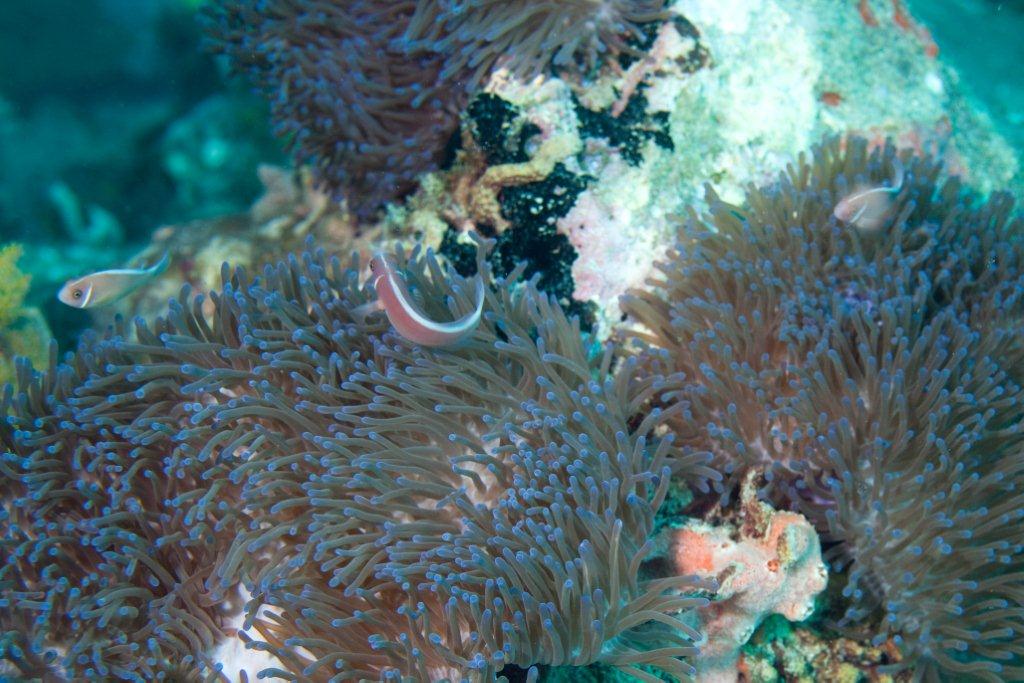 Species from the Skunk Complex (such as this Amphiprion perideraion) present an appearance that is decidedly different than that of the customary clownfish display. Photo by Joi Ito. 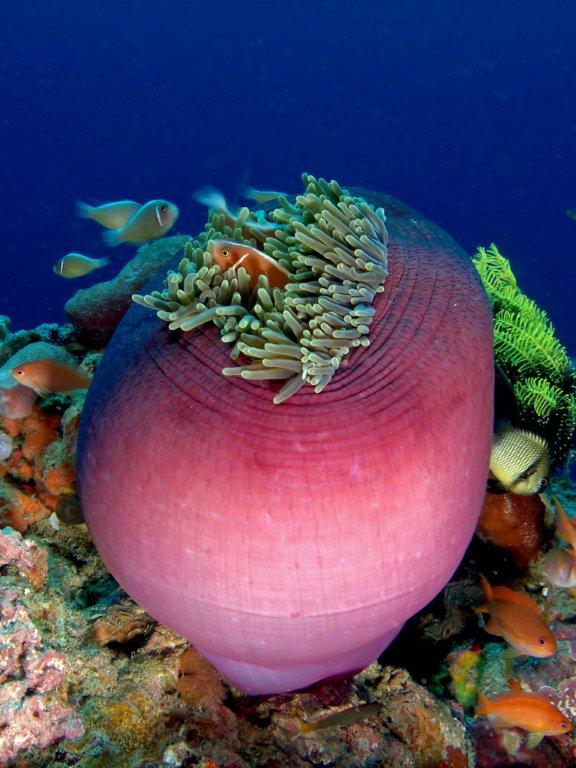 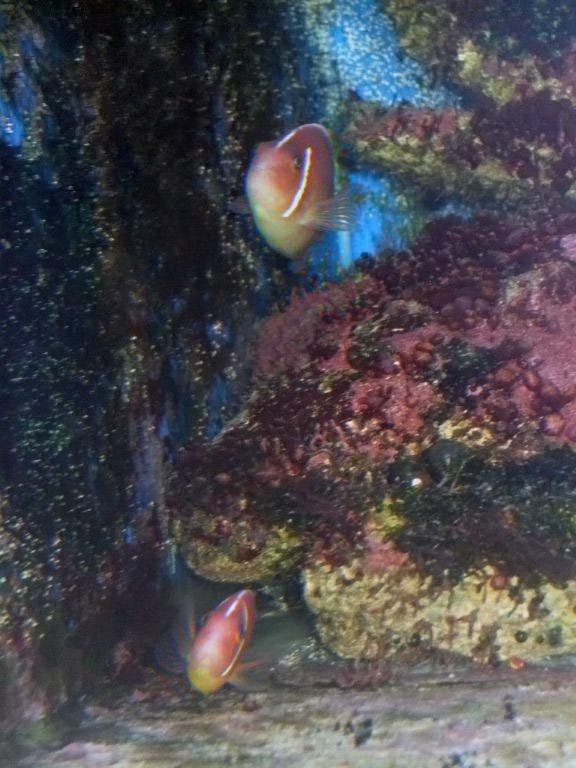 Members of the Skunk Complex (such as these Amphiprion perideraion) will fare better if provided with an abundance of hiding places. Photo by Kenneth Wingerter.

The orange skunk clownfish inhabits lagoons and outer reefs in the Western Pacific (tropical). It is typically associated with the sea anemone species Heteractis crispa and Stichodactyla mertensii. It is distinguished by a bright orange base color, an orange tail, an absence of head stripes, and a single, wide white stripe that runs (starting on the lips) down the length of its back. It grows to a maximum length of 14 cm. 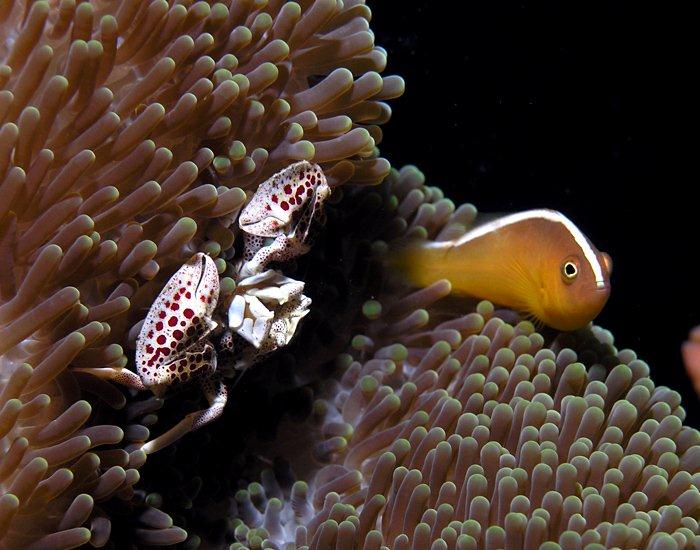 An Amphiprion sandaracinos shares its anemone host with a fellow symbiont. Photo by Nick Hobgood. 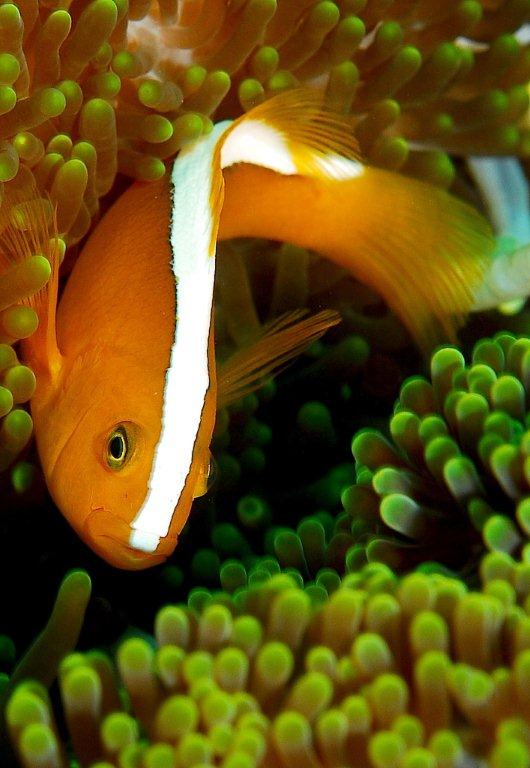 Amphiprion sandaracinos is easily distinguished from its closest relatives by an orange tail and a stripe that extends over the mouth. Photo by Jenny Huang. 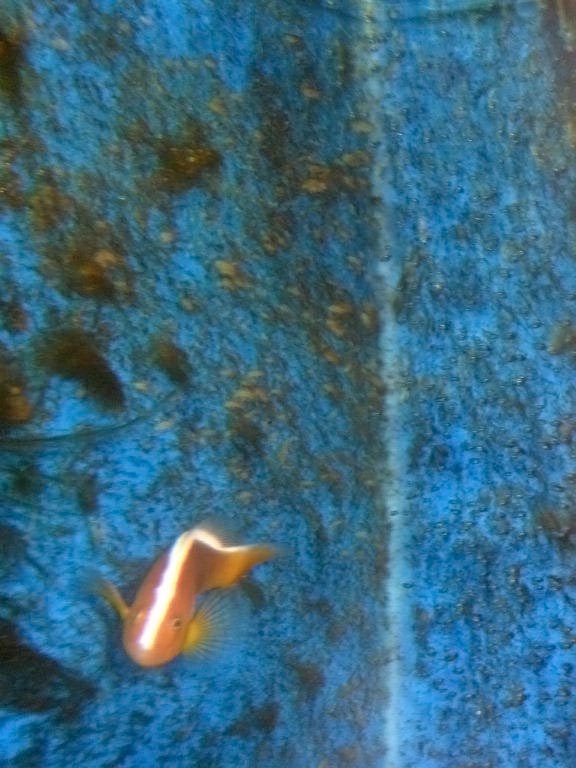 Due to their skittish nature, skunk clownfish (such as this Amphiprion sandaracinos) can make for challenging photographic subjects. Photo by Kenneth Wingerter.

Thielle’s clownfish is native to the Western Central Pacific Ocean (tropical). It has been described from a pair of captive specimens that were said to have originated from Cebu, Philippines. The biology of this enigmatic species remains largely unknown. It is distinguished by having a complete head stripe. It is believed to reach a maximum length of only 9 cm.

Clownfishes of the Skunk Complex offer aquarists a clear diversion from the more the commonly kept members of the subfamily. Their distinctive patterning makes for an attractive variation from the typical clownfish-anemone aquarium display. Their relatively diminutive size makes them a more suitable choice for smaller aquaria. Their relatively peaceful disposition makes them a suitable choice for community aquaria.

The commercial availability of these fishes presently ranges, depending upon the species, from high to quite low. However, due to captive breeding, some members of this complex (most notably Amphiprion nigripes) are becoming increasingly obtainable. While they share many characteristics, each species in the Skunk Complex is uniquely interesting and attractive. Thus, it may be worthwhile to develop a basic understanding of how members of this oftentimes overlooked complex are distinguished from one another.

Feature Aquarium: Small Wonders – 3 ‘Postmodern’ nano aquariums that are small in stature, yet big in impact