Aquarium Fish: An Overview of Fang Blennies of the genus Meiacanthus

At present, the selection of tank bred marine aquarium fishes is modest, but growing. Accordingly, more and more conscientious hobbyists are choosing cultured over wild caught animals. A handful of particularly good (though frequently overlooked) tank bred candidates for the home aquarium belong to the genus Meiacanthus, the fang blennies. 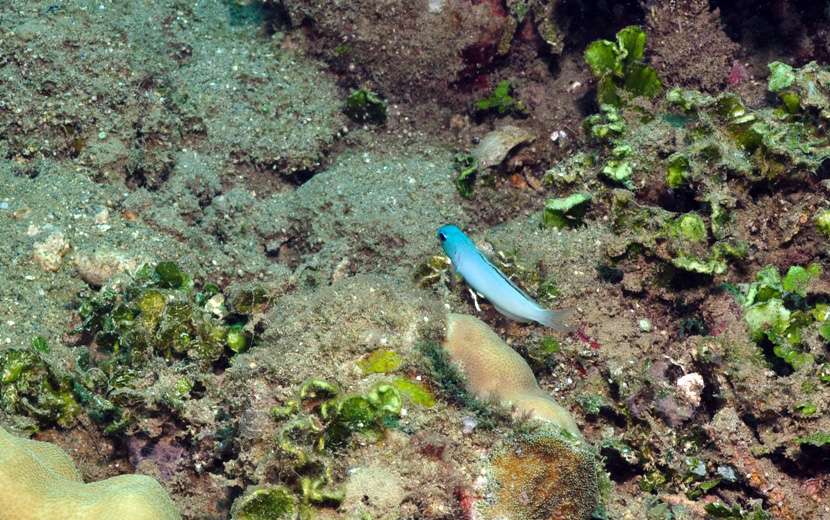 Gut content analysis of wild fang blennies reveals that they have a highly varied diet consisting of items as diverse as algal filaments, fish eggs, bryozoan stalks, and perhaps even coral mucus. Photo by www.sustainableaquatics.com.

The fang blennies (or poison-fang blennies, or sabre-tooth blennies) include a considerable number of highly specialized combtooth blenny species from several genera. While many of these are known to parasitize or prey on other fish, Meiacanthus feeds primarily (though not at all exclusively) on plankton.

Meiacanthus spp. occurs widely across the Western Pacific and Indian oceans. These fishes generally inhabit shallow water environments, though some (such as recently described Meiacanthus erdmanni) have been found at depths as great as 70 meters. They are (with the exception of Meiacanthus anema) strictly marine. 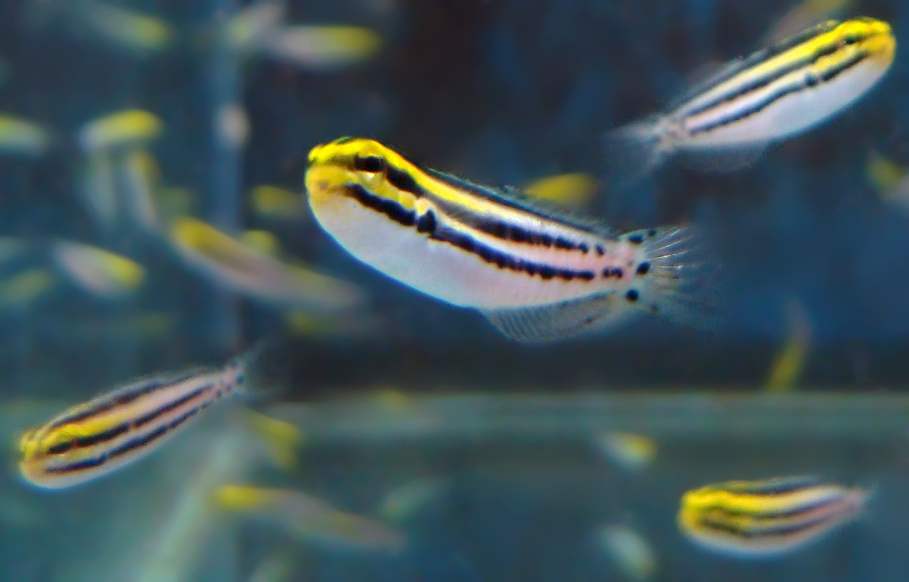 Anterior grooves on the canine teeth end in depressions filled with venom-secreting tissue. Photo by www.sustainableaquatics.com.

Meiacanthus spp. adapts well to captivity. These surprisingly tough fishes are tolerant of suboptimal water conditions and are resistant to disease. They readily accept a wide variety of foods. They are usually peaceful toward their own kind and others. They reach relatively small adult sizes, and so are appropriate for smaller aquaria.

There is a wide variety of hue and pattern within the genus. The distinctive coloration, accentuated by their sleek body shape, makes for an exceptionally attractive animal.

Blennies are widely appreciated for their abundance of charm; fang blennies are no exception here. They are rather busy and inquisitive, and appear to be very aware of their surroundings. Unlike many of their blenny brethren, they have functional swim bladders and spend much time moving about in open water. While they can be somewhat cryptic, they are generally far less secretive and skittish than other blenniids. Probably, much of their apparent self-assurance is derived from their possession of an especially potent defensive apparatus. 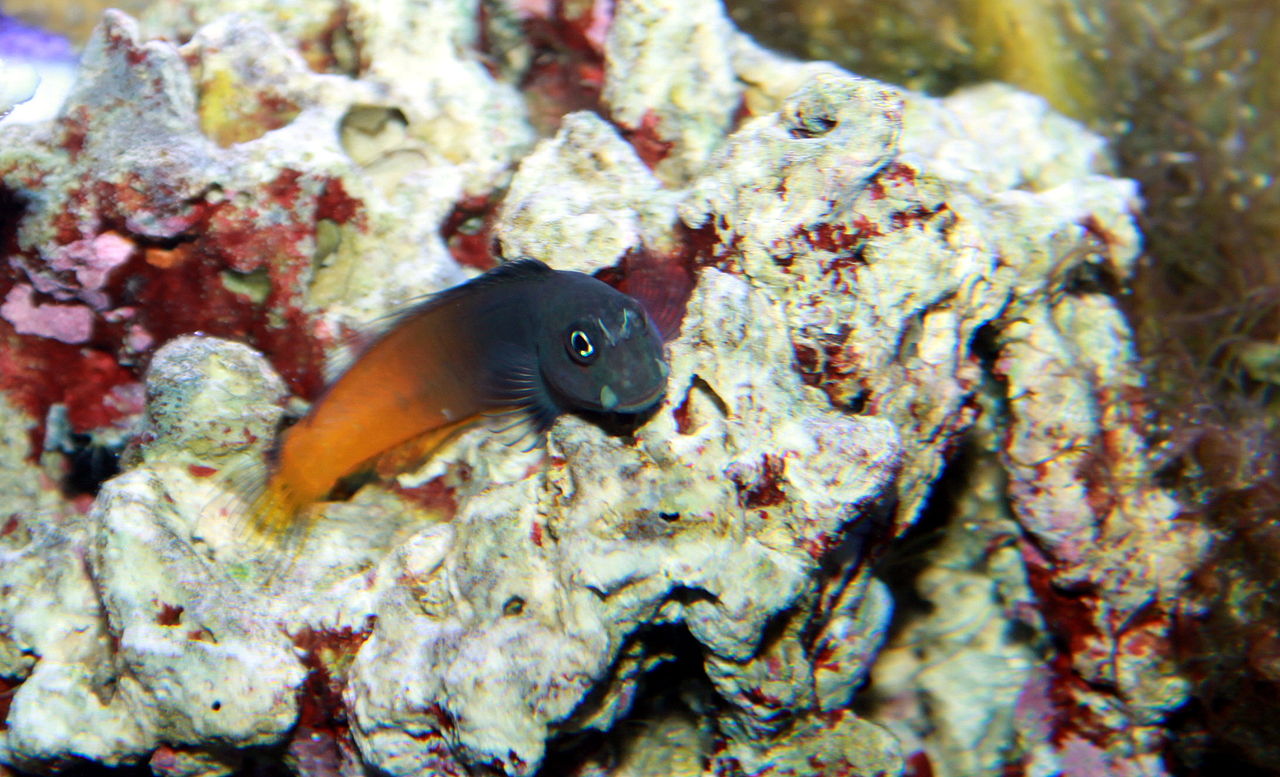 Some fish species (such as Ecsenius bicolor, shown here) are believed to enjoy predator protection through the Batesian mimicry of certain fang blennies. Photo by Brian Gratwicke.

The two enlarged, grooved canine teeth for which fang blennies get their name are situated in the lower jaw. Unlike other fang blenny genera, Meiacanthus usually employs its weaponry only to defend itself or its territory. When seriously threatened, it will open its jaws wide to bear its teeth. Each “fang” is equipped with venomous buccal glands. Venom is delivered with pressure to the glands. While not especially dangerous to most people, fang blenny bites can be quite painful. Fortunately, because of its small mouth, envenomation of humans by this animal is unlikely. That being said, one should never attempt to hand capture or hand feed a fang blenny. 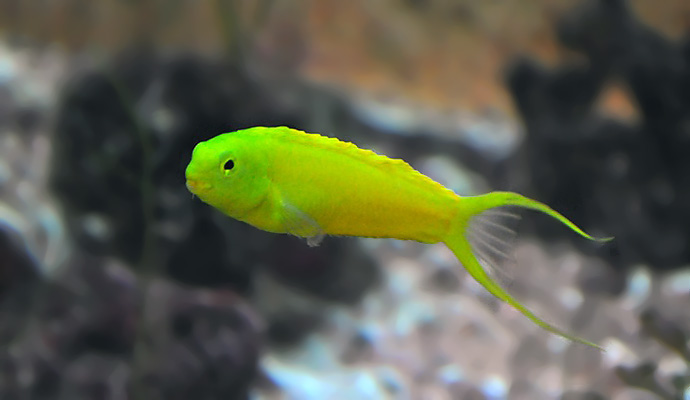 Unlike most blennies, fang blennies (such as Meiacanthus oualanensis, shown here) spend much of the time swimming well above the seafloor. Photo by www.sustainableaquatics.com.

Some fang blennies can be successfully kept in tanks as small as 10 gallons, but will be most comfortable when housed in enclosures of 20-30 gallons or more. They do not require any special care. They will, however, appreciate an abundance of rocky caves and crevasses. They can be quite jumpy, so a tight-fitting lid is highly recommended.

Fang blennies are not particularly difficult (at least as far as marine fish go) to breed and rear in captivity; indeed, most advanced hobbyists have the requisite skills to raise them. They are, however, difficult for most to sex. It is usually best to introduce multiple individuals to the broodstock tank and allow them to form harems. Subordinate males should be removed to spare them from harassment. A single male might court a number of females, and even tend to eggs from several females in a single nest. A full nest is comprised of about 100 adhesive 1mm eggs. A 3-5 inch section of 1-inch PVC pipe serves as a very convenient nest site for both fish and fishkeeper. There are many variations on techniques for nest collection/incubation; typically, the pipe is transferred (about a day prior to hatching) to a hatching tank/tub, fixed to a standpipe, and aerated gently from below with an air stone. While the incubation time varies somewhat depending upon species and temperature, Meiacanthus spp. eggs usually hatch around day 8. Larvae are small (approximately 3 mm in length) and thusly require small live first foods (e.g., rotifers). 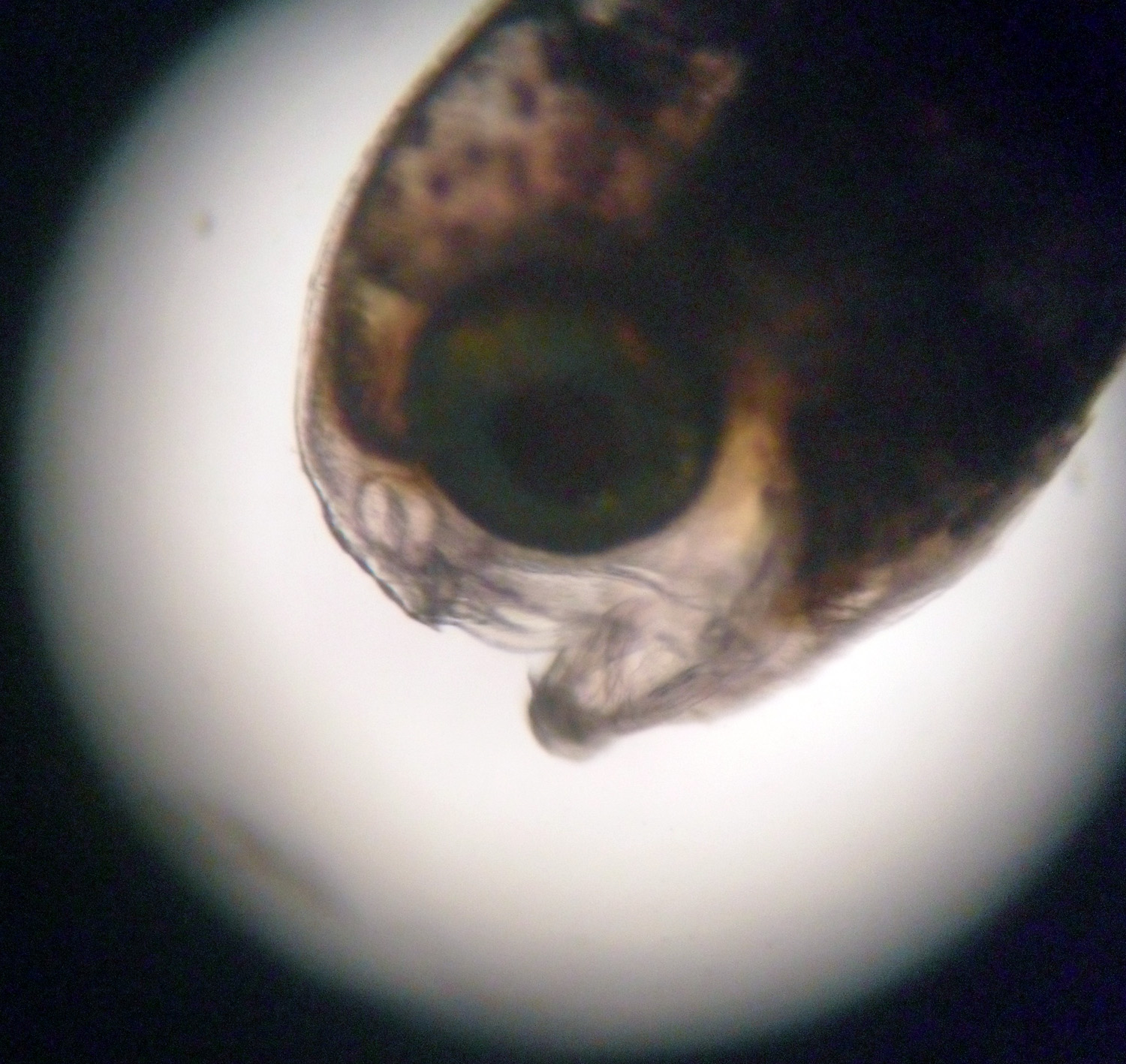 Meiacanthus smithi, one week post-hatch; though this individual’s jaw has not yet grown/developed enough to feed on Artemia nauplii, formation of its toxic buccal glands is underway. Photo by Kenneth Wingerter. 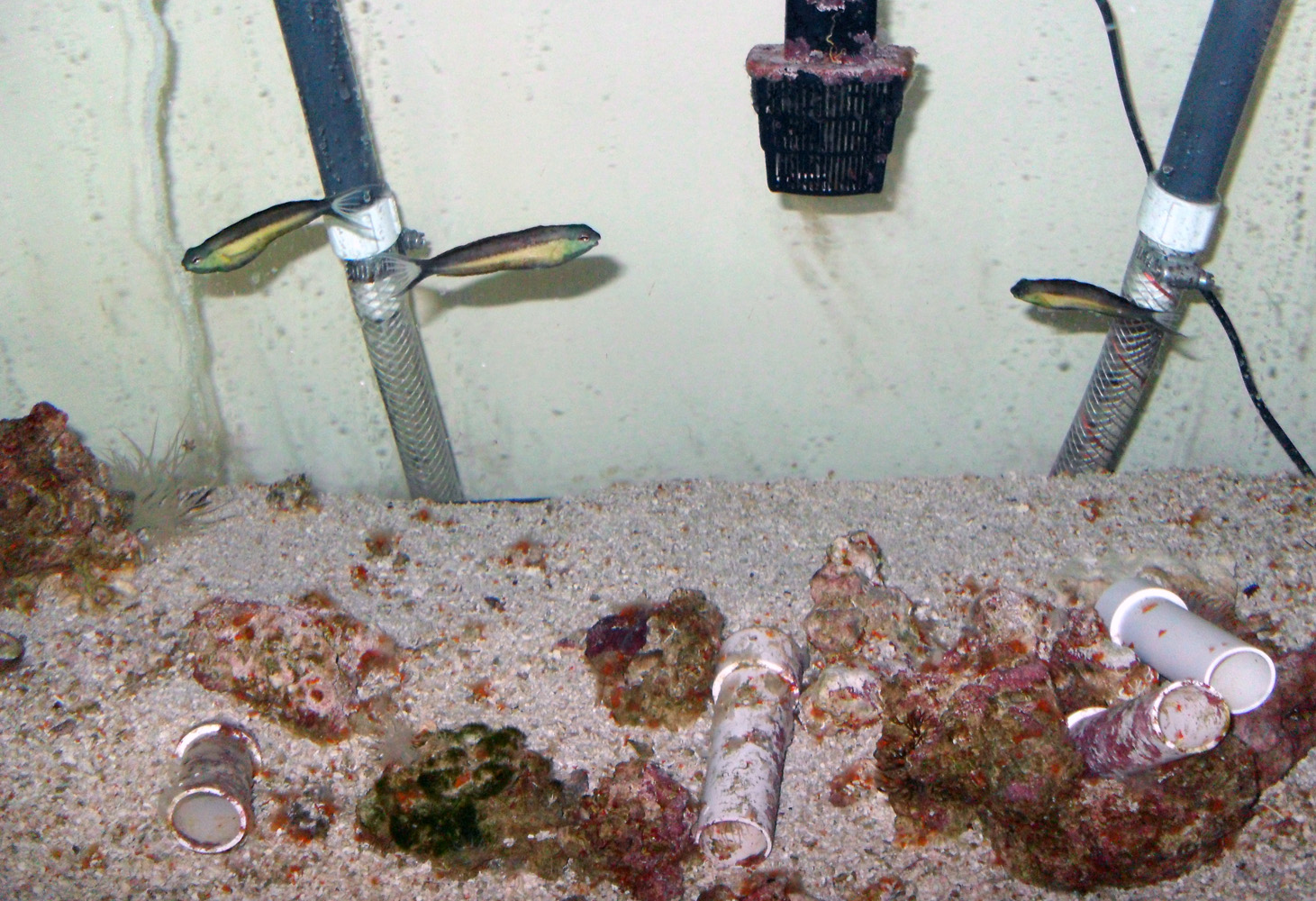 Generally, fang blenny broodstock (such as these Meiacanthus bundoon) will be more productive when maintained in harems. Photo by Kenneth Wingerter. 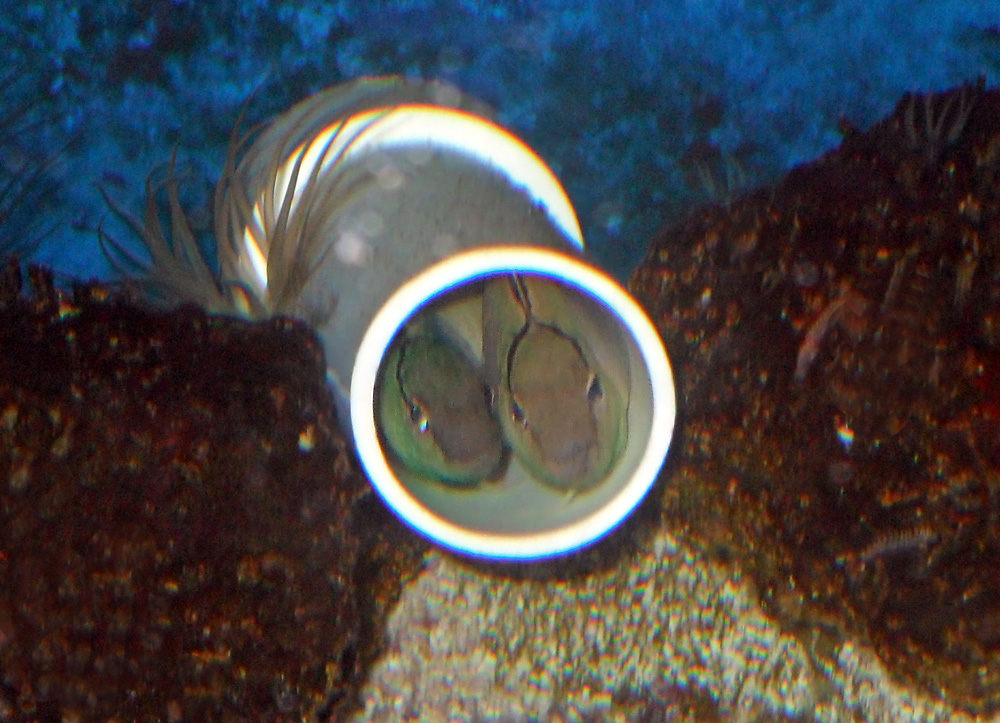 Even less enterprising aquarists with no interest in rearing fish may wish to keep breeding pairs of fang blennies (such as Meiacanthus smithi, shown here) simply to enjoy observing their courting/spawning behavior. Photo by Kenneth Wingerter.

To date, at least 28 Meiacanthus species have been described: 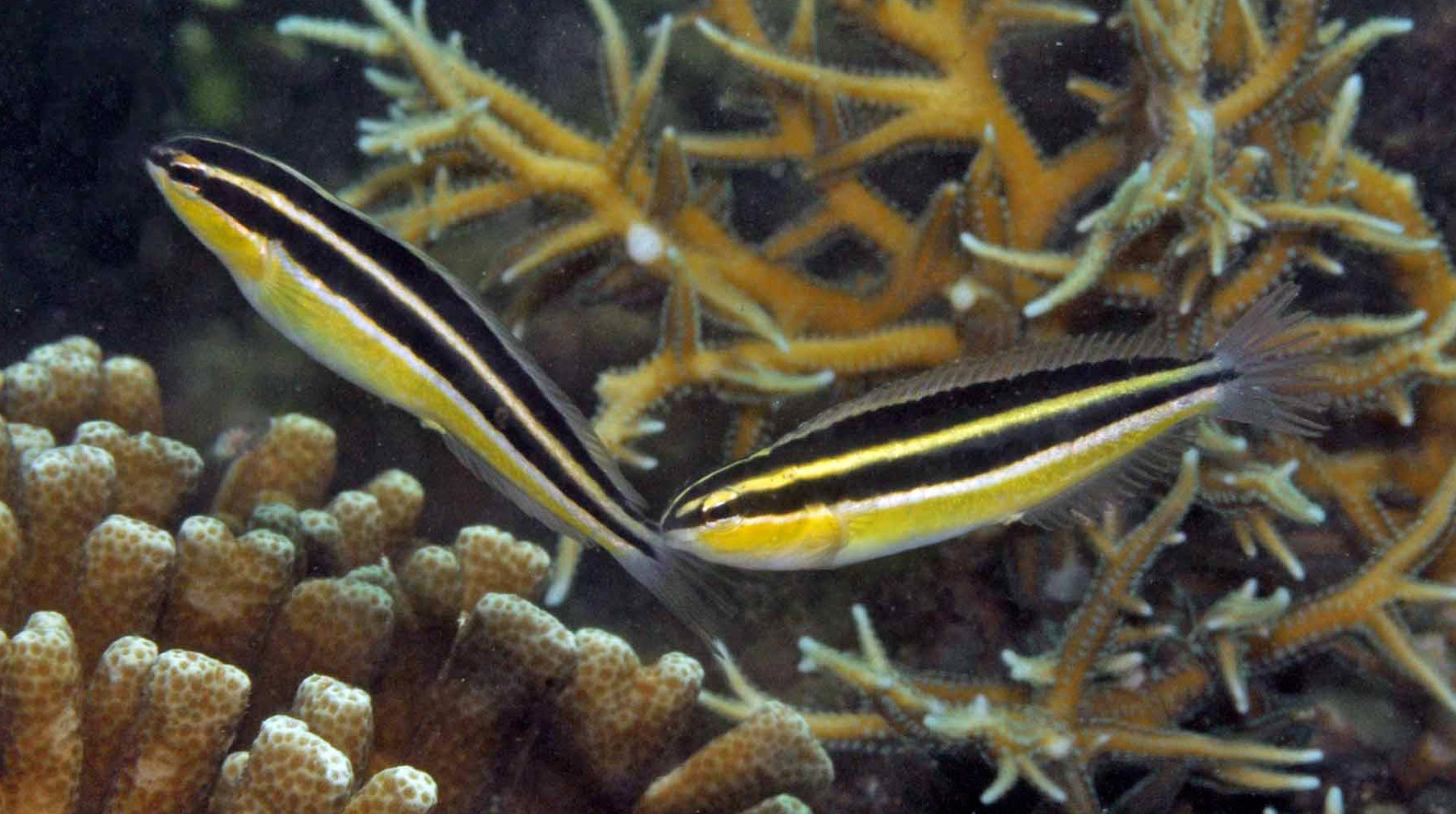 Meiacanthus abruptus can be found on shallow, mangrove-associated reefs. Photo by G.R. Allen (image reproduced from the author (2011) in Zootaxa with permission from copyright holder Magnolia Press.

Meiacanthus atrodorsalis has been established as the type species of the group. Photo by www.photolib.noaa.gov. 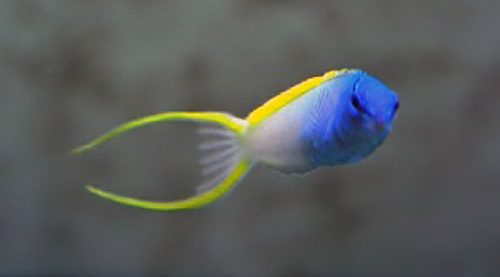 A deeply forked caudal fin is characteristic of Meiacanthus atrodorsalis. Photo by www.sustainableaquatics.com. 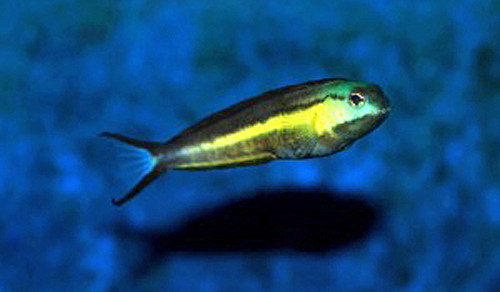 Now that Meiacanthus bundoon is being produced in ornamental fish hatcheries, wild harvest of the species may eventually be significantly reduced. Photo by www.sustainableaquatics.com. 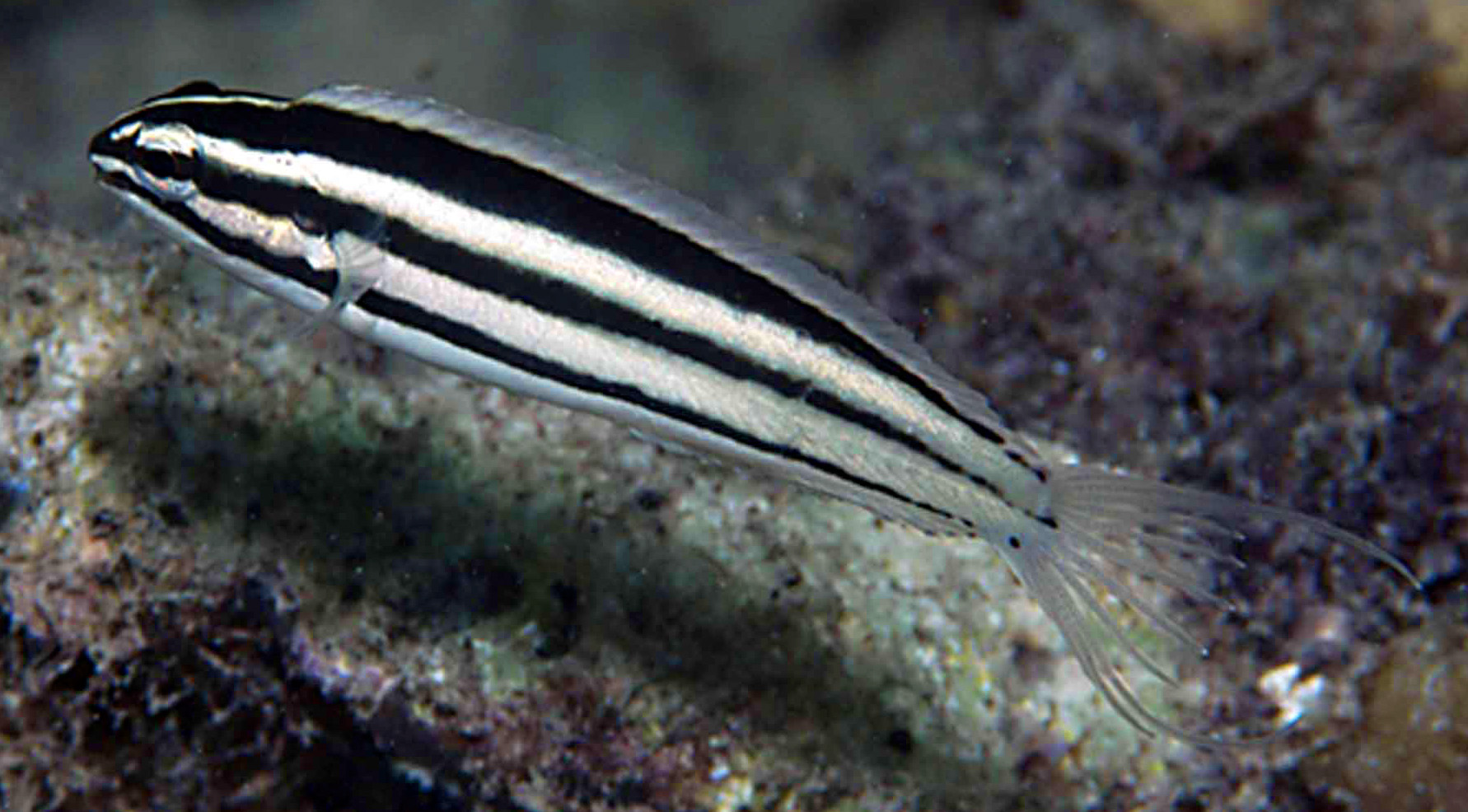 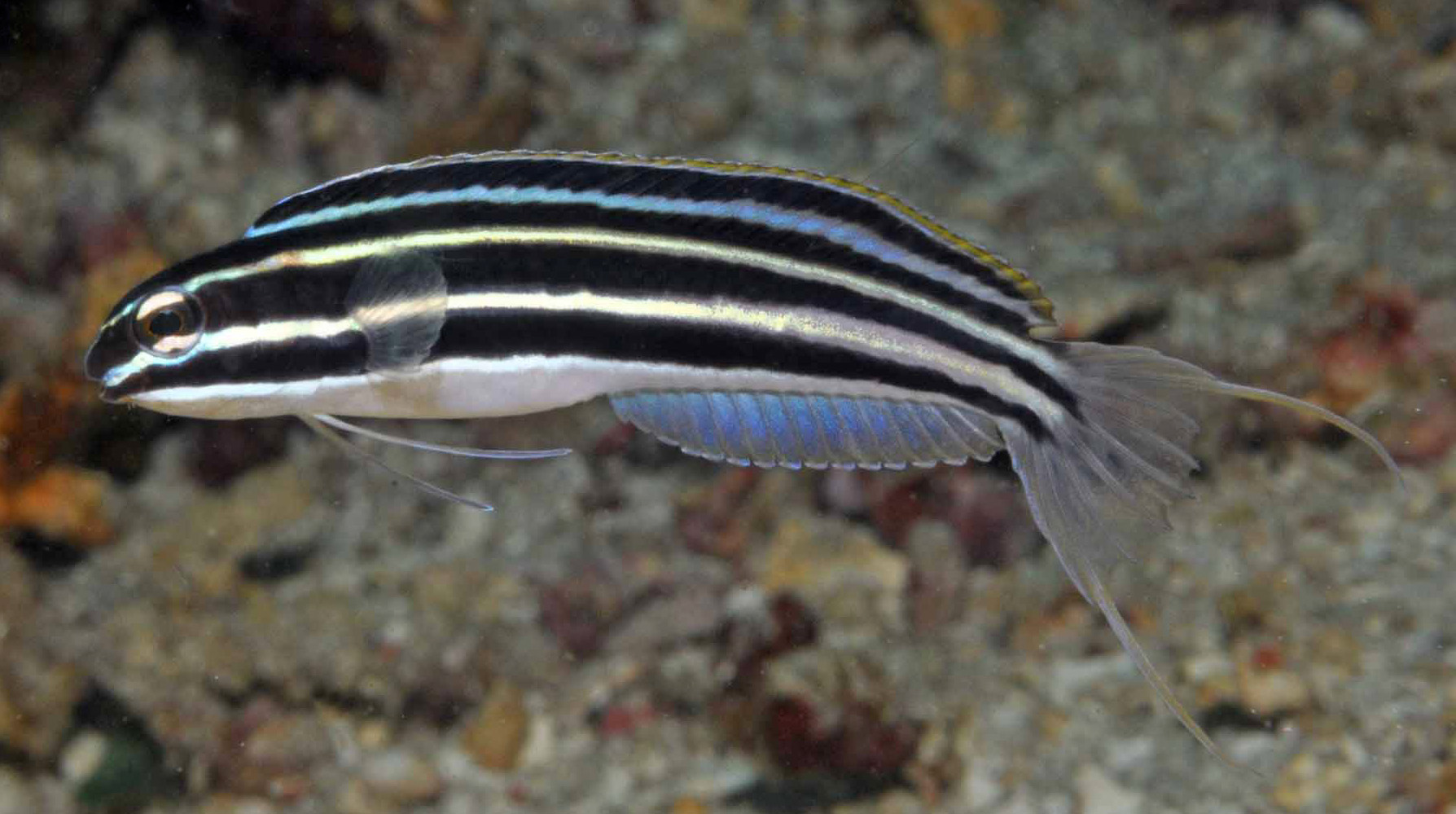 Meiacanthus cyanopterus could someday be popular among keepers of deep-water themed aquaria. Photo by G.R. Allen (image reproduced from the author (2011) in Zootaxa with permission from copyright holder Magnolia Press. 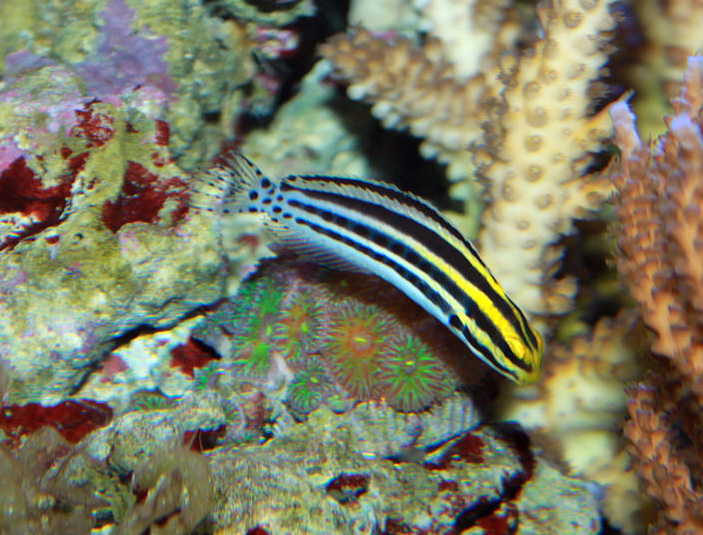 The bright, distinctive coloration of many fang blennies (such as Meiacanthus grammistes, shown here) presumably serves as a warning to would-be predators. Photo by Brian Gratwicke. 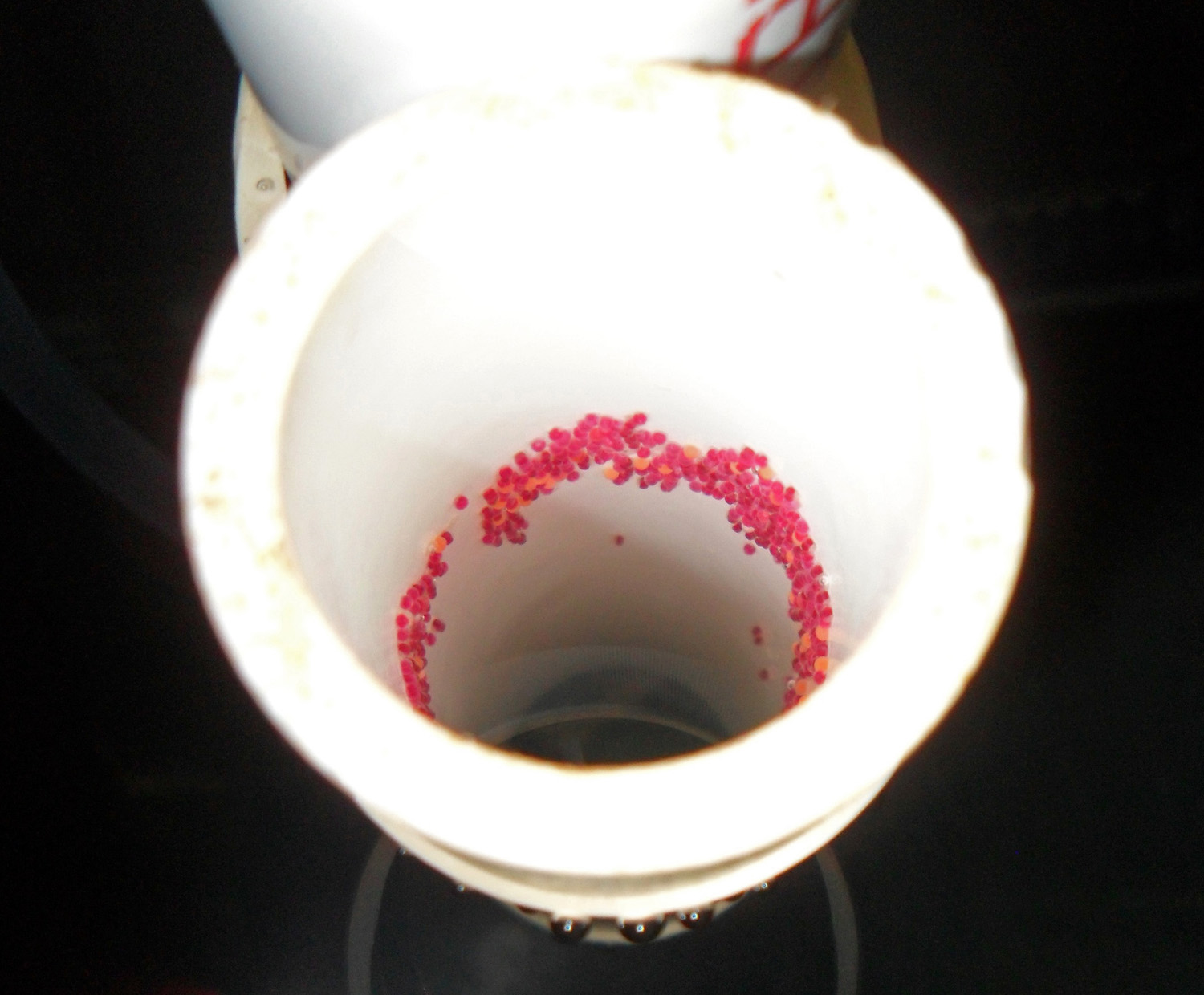 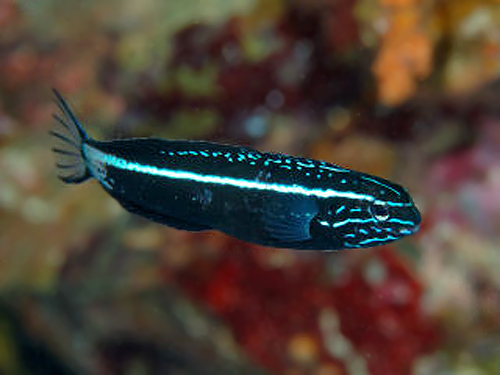 Demand for Meiacanthus kamoharai could greatly increase with the growing interest in temperate marine aquaria. Photo by izuzukidiver.com. 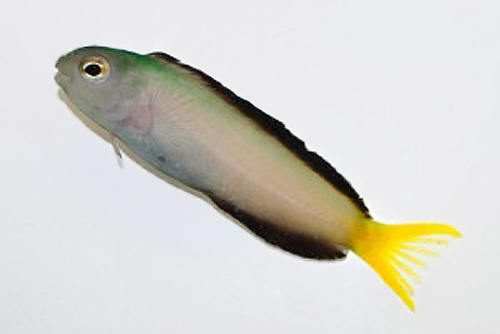 Meiacanthus mossambicus is thought to be one of the least aggressive members of its genus. Photo by www.sustainableaquatics.com. 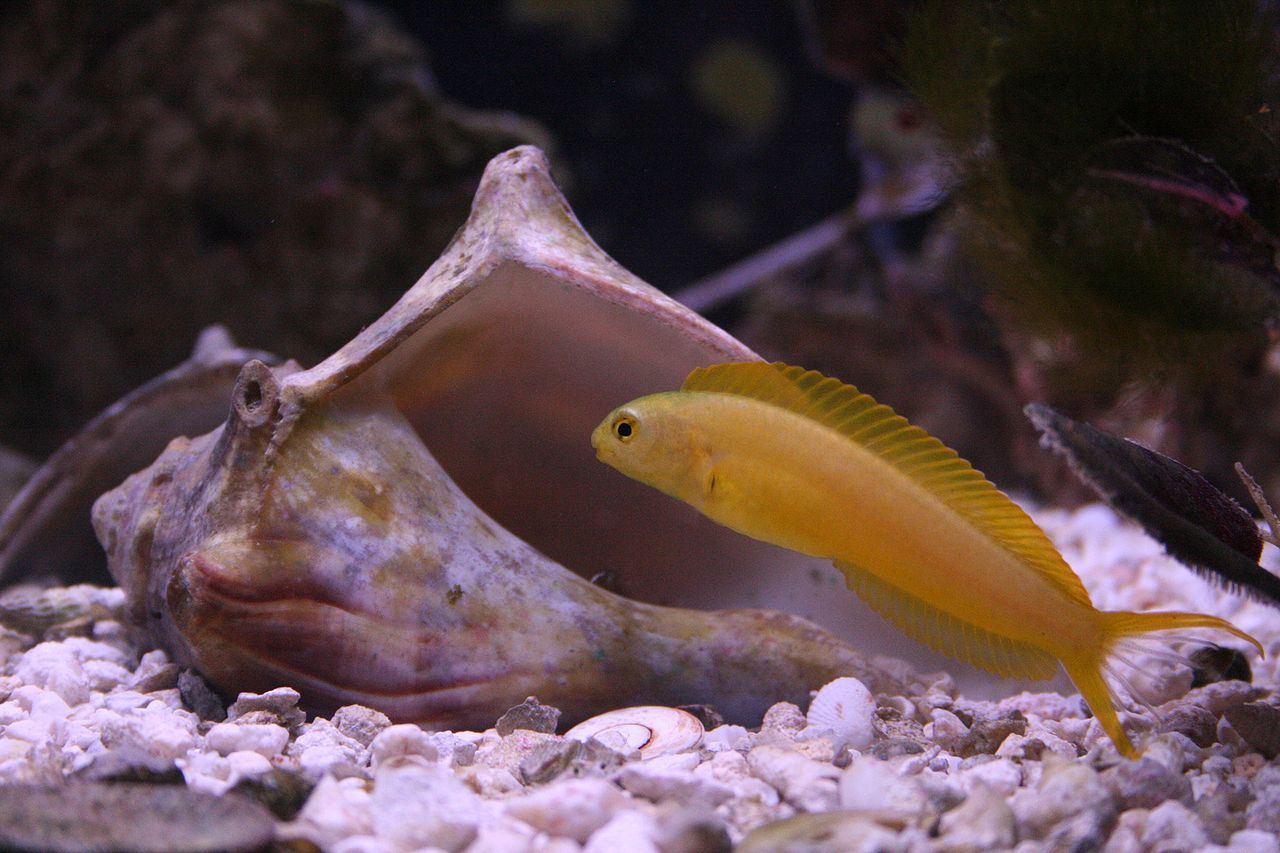 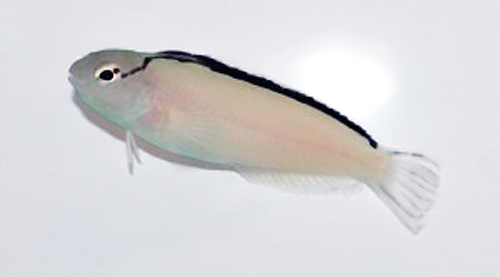 Meiacanthus smithi is one of the smaller members of its genus. Photo by www.sustainableaquatics.com. 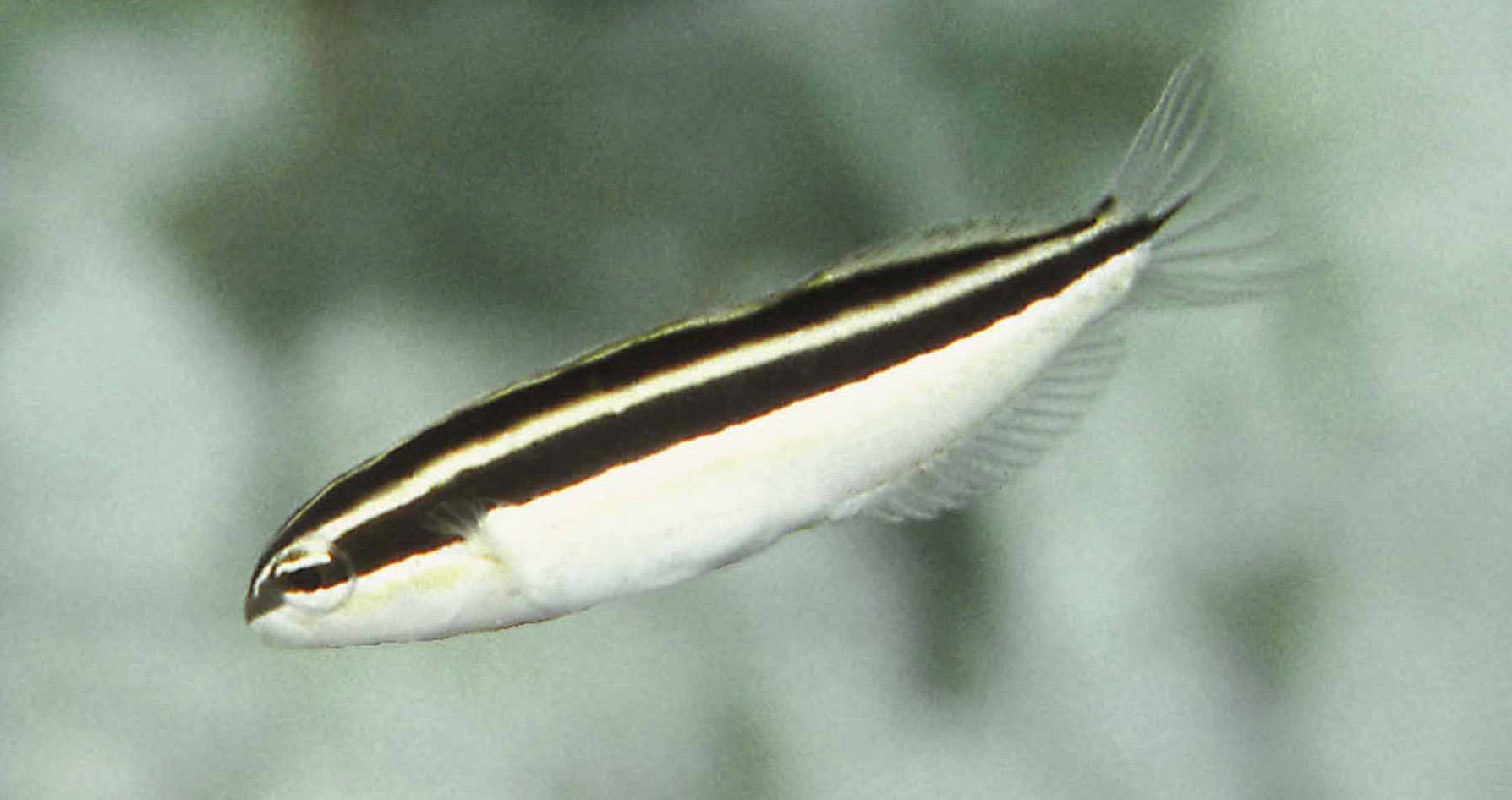 Fang blennies (such as Meiacanthus vicinus, shown here) are mainly diurnal planktivores, but will eat a large variety of items. Photo by G.R. Allen (image reproduced from the author (2011) in Zootaxa with permission from copyright holder Magnolia Press.

Only a fraction of these are regularly encountered (much less cultured) in the trade; this will almost surely change with continuing imports of these species.

As ornamental fish, fang blennies of the genus Meiacanthus have it all–sturdiness with elegant good looks, individual character with great adaptability, peacefulness with the ability to stand up to aggressors. Owing to their diminutive size, they are appropriate for many smaller aquaria. The relative ease with which they can be cultured might make them especially attractive to breeders. Captive bred specimens of common fang blennies (e.g., Meiacanthus oualanensis) are now widely available; the availability of captive bred specimens of less common fang blennies (e.g., Meiacanthus tongaensis) will likely increase in the near future; it is entirely plausible that even presently unavailable species (e.g., Meiacanthus geminatus) will be produced on a commercial scale in years ahead. Come what may, these fishes undoubtedly will hold the interest of marine aquarium hobbyists for a very long time.