I think that every aquarist would like to have a fish of their dreams, the one that they just want to see once in a lifetime. For me, I also have one too! And that is the fish that I would like to discuss here. It is the Holy Grail for all Angelfish lovers, the Conspicuous Angelfish (Chaetodontoplus conspicillatus)

Conspicillatus Angel belongs to the family Pomacanthidae like all other angelfishes. It is one of the rare members of the genus Chaetodontoplus, which makes it infrequently seen or available to aquarists. It is a sought after around the world due to its spectacular markings and rarity. The fish has a gray body on the upper part which turns a darker color until it becomes black on the lower part. In some individuals, the different between these two colors may become less obvious. The easiest way to distinguish this species is to look at a bright blue ring-like line surrounding the eyes on the yellow face, which makes it as obvious and attractive as it name: conspicuous. 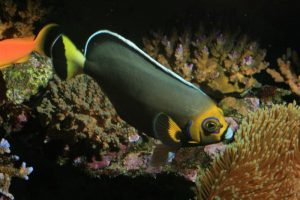 Like other members of the family, the juvenile of the conspicuous has another color pattern that doesn’t look exactly the same as the adult. The juvenile of this species looks similar to the adult but lacks the blue line around the eye and yellow patch on the middle of the pectoral fin. Also, the ventral fin is black instead of white and there’s some color missing on the other parts of the body.

This ‘angelfish is found south of the great barrier reef toward the islands of the South Pacific like New Caledonia and Lord Howe. In Lord Howe, the fish have been observed in lagoons and at a lesser depths. But Lord Howe is a protected area so that all wildlife cannot be taken out of the wild. Normally, this fish will be found near coral reefs and lagoons or the protected area near harbors at depth between 2-60 meters. Adults will be found at a greater depth, while the juvenile is more common in shallow water. This is a large angelfish species that can grow up to about 10 inches in length.

There was a report of a hybrid between the Conspicuous (C. conspillatus) with the Meredith’s Angelfish (C. meredithi) in the wild. On rare occasions, this hybrid will be caught and sent to Japan where it commands a high price tag. Several pictures of this cross-breeding have been taken and published in many Japanese fish magazines and books. 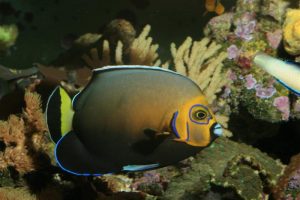 The first time that I had a chance to see this fish was when I spend my holiday in Hong Kong, at a fish market. The one that I saw was about 10 inches. At first I saw the fish swimming in the main show tank. I was very excited to walk around the tank to get a better look at it. This full grown Conspicillatus angel is housed with many ‘big size’ angels such as Halfmoon Angelfish (Pomacanthus maculosus), French Angelfish (P. paru), Emperor Angelfish (P. imperator), Blue-ring Angelfish (P. annularis), King Angelfish (Holacanthus passer) and many more. The fish seems to be healthy in appearance, but a crowed tank like this may cause stress in the fish and its health in the long term. After watching for awhile, I asked the owner for permission to take a photo. He was kind enough to let me do so. He told me that the fish was not for sale, and that it was with him for awhile and was eating well.

The Conspicuous Angel is considered a very rare fish from the Thailand fish trade. It has been shipped from Hong Kong on a few occasions long ago and never appeared again. However, this fish is occasionally offered for sale in the U.S. and Japan. My elder friend, Archen Supasri, who is a rare fish collector, suddenly was able to get one for his tank right after he saw it. The fish that Archen got was about 5 inches. I told him that it might be too big and be too finicky to get to start eating. The one that we selected was the smallest one in this shipment and it was in great condition with no sign of disease. It was amazing to see the reaction of people when it appeared at the front of the holding tank. On that day, I decided to follow Archen to his house when he introduced the fish to his tank. 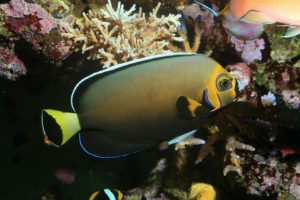 Archen’s tank is 7-ft reef tank that housed mainly Pseudanthias spp. together with several wrasses and some angelfish like the Japanese Pygmy Angelfish (Centropyge interruptus), Joculator Angelfish (C. joculator), Flame Angelfish (C. loriculus) and a Goldflake Angelfish (Apolemichthys xanthopunctatus). When first introduced, the conspicuous quickly swam into a rock crevice for protection. We were happy to see that it was not getting bullied by other angelfish which we were concerned about; maybe because it was larger than any of the other angelfish in the tank.

For the first three days, the fish seems not to show any interest in food. It swam peacefully around the tank, but would dash to the crevice when someone approached. The active school of smaller Pseudanthias made a perfect type of fish for it to feel more comfortable. It became one of our topics every time when we talked on telephone for almost a week. However, on the fifth day, it started to show interest in dry clam and the pellets which was floating in front of it. Archen cried out loud with happiness on the phone while he was having the conversation with me after he saw it eat pellets for the first time.

After that we both were busy and did not communicate with each other for about two weeks. Then one early morning, I received a phone call telling me with great joy that the Conspicuous Angel became tame and he could feed it from his hand. I was glad to hear the news and immediately rushed to his house.

On weekends, I usually went to visit him to look at the fish. His tank is gorgeous and wonderful for me as it always is. Archen kept mainly soft corals such as Sinularia, Sacrophyton, and Lobophyton spp., along with some Acropora and Turbustrea spp. He was lucky that his Conspicillatus did not attack any corals and clams. By the way, many people have reported that this is not a totally reef safe angelfish, especially with zoanthids and brain corals. And some would even nip at the polyps of Acroporas or some LPS. 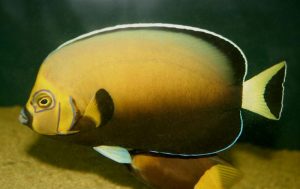 By now, the fish has been kept for about two years. The only problem that we have encountered was cloudy eyes, which was the result of poor water quality mainly from a nitrate problem. But its eyes turned back to normal after water changes. This symptom could be preventing by maintaining better water quality. But for others, the main problem is how to get the fish to eat. At the beginning, the Conspicillatus is considered a difficult fish to start eating. But once it starts to eat, it will gradually accept a wide variety of food, from vegetable to meat. It can be feed with pellets and flake or chopped seafood and also ghost shrimp; make sure that it also gets green stuff such as cabbage or Nori as a supplement. Even when it starts eating, many suddenly stop eating. We don’t know the exact reason, but switching food once it gets started might help when it stops eating the food we normally offer.

Larger specimens usually refuse to eat and gradually vanish in a home aquarium. The best size to get them eating is the small juvenile around 3-5 inches. If you are lucky enough to acquire one that starts to eat, do not disturb it and let it fully acclimate to the tank so that it doesn’t get stressed and stops eating. Newly introduced fish are prone to Ich and fin rot, but it will get better in a tank with good water quality.

These fish will do well in a big tank with plenty of crevices for them to hide when threatened. Good water quality is required like for other members of the genus Chaetodontoplus. This is not the an easy member of the genus because they are sensitive. Because of it price and rarity, make sure that the fish started to feed before you get it.