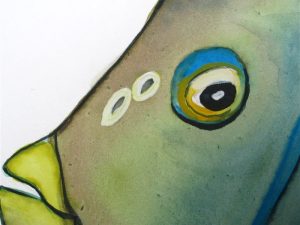 Angelfish snout (Pomacanthus semicirculatus) shows position of nares (nostrils) just forward of the eye. The nares are highlighted by a lighter skin color in this species, making it a perfect anatomical model.

“That fish has the look of a cow” or “that one the countenance of a monkey,” are not unheard of comments in the aquarium hobby. The use of analogy is, after all, ubiquitous in the scientific and common naming of fishes. Take seahorses for example. They belong to the genus Hippocampus, the prefix “hippo” meaning horse in Greek, not an unobvious choice considering their charming shape. Even powerful sounding names like lion, tiger, and leopard are applied to several fish species as common names. However, using general appearance alone in describing an animal can be misleading. But this is where analogy shows it usefulness, as we kick it up a notch and apply it to behavior and physiology as well as to anatomy. And the perfect animal to compare to a fish in the beginning of this article is the common house cat. Why? Because, I once witnessed my cat refuse to use her litter box for no apparent reason, even though the litter smelled fine and looked clean. Ironically, the problem turned out to be my nose, or more accurately my weak sense of smell. Cats may be mammals like us but their sense of smell is more sensitive than ours. But what does this have to do with aquarium fishes, you might ask. Well, have you ever smelled your aquarium’s water and thought that it smelled fine and looked clean? That’s what it has to do with aquarium fishes. 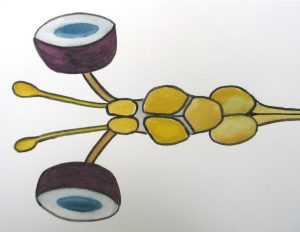 Generalized dorsal view of the fish brain, showing the small olfactory bulbs on the far left, at the end of long stalks. The bulbs connect to the olfactory organ or capsule (not shown). The two large objects to the sides are the eyes still connected to the brain. The spinal cord is on the far right.

Of course, the obvious difference between cats and fishes is that cats smell in air while fishes smell in water. But what is important about the previous analogy is the similarity. A cat’s litter box like a fish’s aquarium water is a receptacle for metabolic waste. And the problem for us, as aquarium hobbyists and humans, arises from the fact that we are ill equipped to judge the quality of aquarium water by its smell. We have no reference point. We are aliens to the aquatic world and to life inside an aquarium. We are for the most part free to walk away from unpleasant smells, like my cat did, when she refused to use her litter box. Aquarium fishes on the other hand are confined to a limited space, which they are dependent on for all their physical requirements, like temperature, food, respiration, and osmotic balance. It is thus in our interest to understand the basic workings of a fish’s sense of smell, the olfactory system.

Before we look at the inner workings of the fish olfactory system we should take a moment to appreciate what processes the information of a smell once it leave the sense organs of the “nose”. The chemical receptors of the olfactory system make no interpretation of the chemicals being sensed; that work is done by the brain. The brain is ultimately programmed by DNA and life experience. What is an attractant, or pleasant flowery smell, to one species of animal may be a repellent, or nasty stink of a smell, to another. The smell of rotting flesh repels most of us, but to a shark it may be the sweet smell of lunch. The wiring of the brain is the ultimate decider in the matter. (Of course, human consciousness allows us to attach strong emotions and memories to smells). So, different fish species may react to a particular smell differently even
though they are “picking up” or sensing the same chemical in the water. Therefore, the part of the olfactory system we are interested in is the receiver or the “nose” of a fish. 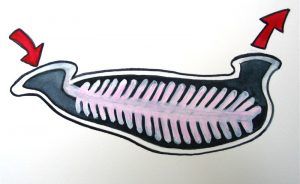 Cross-section of a complex olfactory capsule with many epithelial folds (a rosette) and the two nare openings. The arrows indicate the flow of water thru the capsule. More folds (lamellae) indicate more surface area and therefore more chemical receptors cells.

“Life is a series of tubes”, a biologist might pithily proclaim. There’s the circulatory system, the nervous system, and the gastro-intestinal track, etc. A smaller stretch that might also be labeled a tube is the water pathway of the fish olfactory organ. But before we look inside the tube let’s make a simple comparison. The pathway of the fish olfactory organ bears little resemblance to that of humans, for they do not have a nasal cavity imbedded in the middle of their skulls like we do. In fish, the pathway is a simple entrance and exit; it is not connected to the mouth or pharynx as in mammals. For this reason the openings are technically called nares, and not nostrils. Fish, therefore, don’t have the luxury of “breathing” thru their nares. Their olfactory organs are situated on either side of their snout, imbedded in the skin. And most teleost fishes have a pair of nares on both sides of the snout. “Primitive” or “ancestral” fishes, lampreys and hagfish, have a single nare, while sharks have a fold of skin.

Because fish vary so much, we can only talk about the generalized shape of the olfactory organ. Certain species are just more adapted to sensing smells than others, and therefore the olfactory organ is a multifarious apparatus. Inside the organ itself is the epithelium (a layer of tissue made up of cells stacked side by side) and folded to maximize the surface area in contact with the incoming water. (See diagrams). Surface area and contact time are therefore key to the physical reception of water born chemicals. Short olfactory organs with few epithelial folds typically belong to fish that rely on sight rather than smell for finding food. And conversely, long olfactory organs with many epithelial folds are going to belong to fish that rely on scent for finding food. Complex epithelial tissues with multiple folds are called rosettes. And as the name implies, they are flower like and have many “petals” or folds, which provide considerable surface area to contact the incoming water. The technical term for the folds of tissue is lamellae, which means “thin plate” in Latin. Appropriately, it is also the term used to describe the many facets of the fish gill. In both cases it is surface that is key to maximizing contact with incoming water. The olfactory lamellae maximize the number of cells available for chemical reception. The retina of the human eye is analogous, where millions of photoreceptor cells capture photons of light. The more retinal surface area the more light can be sensed. 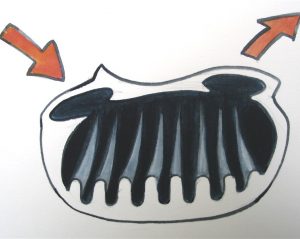 Olfactory stimuli provide fish information that sight cannot. Most fish species are nearsighted, and water in ecosystems varies greatly in clarity. So a sense of smell is a powerful tool. It helps in: locating food or prey, identifying conspecifics or mates, and sensing and evading potential predators. “Fear”, for example, can be induced by smell. In several fish families, small schooling fish, when physically injured by a predator, release a pheromone called Schreckstoff from their damaged skin cells. The pheromone creates a sense of panic, causing the school to disperse and to swim away from the danger, whatever it may be. Other types of chemical stimuli include hormones, amino acids, nucleotides, ammonia, and lipids.

Concentrated in an aquarium, chemical stimuli constitute a possible threat to fish health. In the opening of this article the analogy of a cat not using its litter box was used to illustrate the fact that certain smells are beyond our human noses. The same goes for the water of an aquarium. We may sniff our aquarium’s water in an attempt to grade its quality, but what information are we really gathering? We might only detect the worst of possible water qualities while completely missing the less worse, but still harmful levels. Fish sense what we cannot. So, isn’t it reasonable to assume that aquarium fish can be overwhelmed by water borne smells in the same way we can be by air borne smells. Moreover, the confines of an aquarium not only amplifies how quickly chemical stimuli accumulate but also their effect on the olfactory system. With all that said, it is no exaggeration to state that the protein skimmer is the marine aquarist’s best friend. 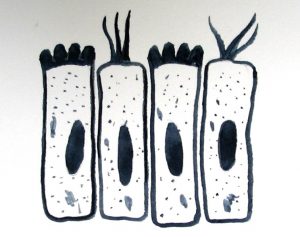