When I first relocated to beautiful sunny South Florida I was amazed with the attitudes most Floridian reef hobbyists had toward wrasses in a reef aquarium. For that matter many places I visited across the country felt a little discomfort when I suggested wrasses in their aquariums. Most were not aware that there are many different genera of wrasses that can be kept in a reef aquarium that would not harm any of their reef fish neighbors and as planktivores will not eat or harm any of their corals. Genera of wrasses that are commonly kept in reef aquariums are Anampses, some Bodianus, Cirrhilabrus, some Coris, some Halichoeres, Macropharyngodon, Paracheilinus, Pseudocheilinus, Pseudojuloides, Wetmorella, Xenojulis, and there might be others I may have over looked. Most of the genera mentioned would require the proper captive environment for any chance of success. 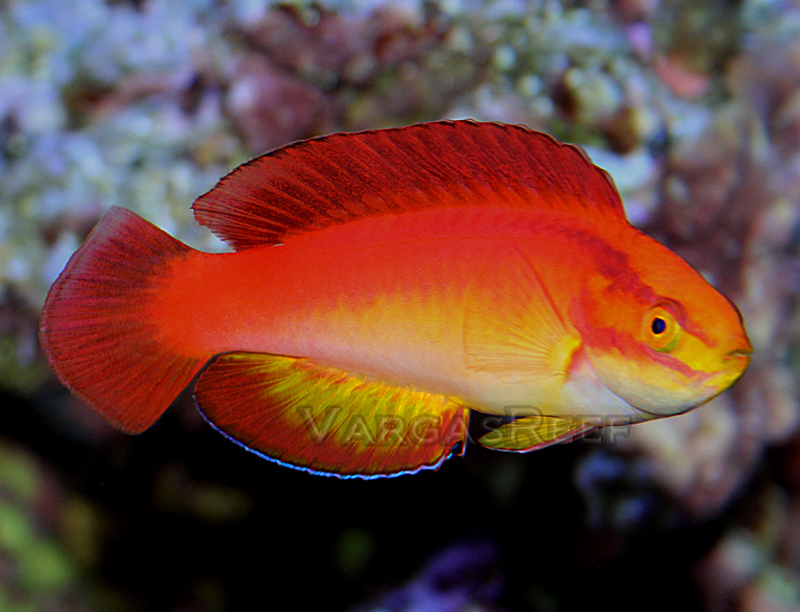 Anyone that knows me knows that I am an absolute geek for Cirrhilabrus, Paracheilinus, Pseudojuloides, and Macropharyngodon wrasses. I’ve own many of these wrasses at one time or another, but for the sake of this article I will focus my attention on Cirrhilabrus jordani. This genus is commonly referred to as Fairy or Velvet Wrasse. Associated with a few common names this Cirrhilabrus is often tagged with Jordan’s Fairy Wrasse, Flame Fairy Wrasse, Hawaiian Flame Wrasse, and Flame Wrasse.

Jordan’s Fairy Wrasse’s natural distribution takes it through the Hawaiian Islands, Johnston Islands, and Midway Atoll. It is typically found in groups at depths of 65 feet (20 m) or greater, near fore-reef slopes, walls, and over rubble zones. Terminal males defend their territories with great vigor, which can include a harem of a few or more than 100 females and juveniles.

Cirrhilabrus jordani is a seasonal fish that commands a high dollar price tag, as high as $300.00 for a large terminal male. They can live for many years and are well suited for a marine aquarium but fair best in a reef environment. 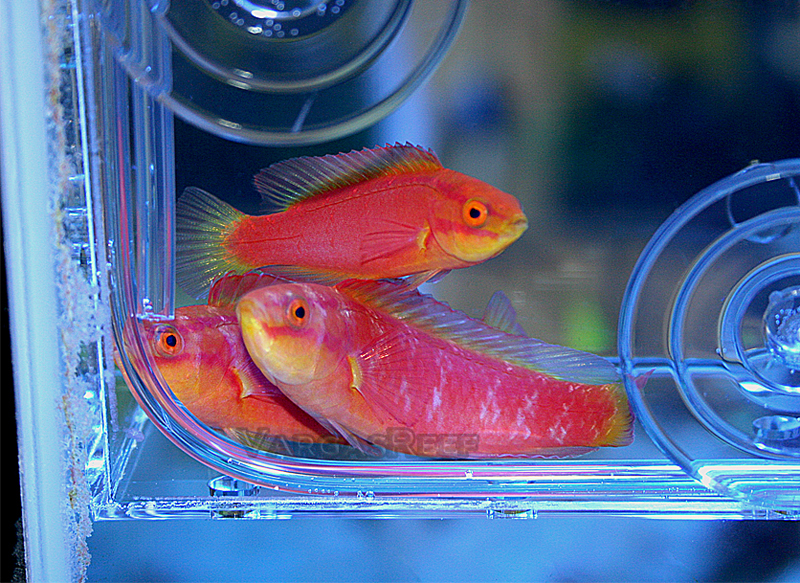 The three wrasses held in a Holding Container for two days before being released.

Cirrhilabrus wrasses are sexually dimorphic making them protogynous monandric hermaphrodites (Randall & Kuiter, 1989), which means-all individuals begin life as females and eventually convert into a fully functional male. A small number of females will never procreate and begin the conversion process leading to the sex change. I have personally observed a few genera of wrasses including this one convert from terminal males back to adult female coloration. On a few occasions I have witnessed males convert back to females and spawn with a more dominant alfa male.

These wrasses are also dichromatic, where the coloration of the juveniles and the females are very similar, with nearly transparent fins whereas terminal males will exhibit vivid chromatic attire with larger more deeply colored fins. During the act of courtship the male’s colors will become more vibrant and intense.

They are diurnal (opposite of nocturnal) creatures which sleep through the night wedged between the aquariums rockwork or substrate, encased in a mucus cocoon which they secrete around themselves for protection.

Cirrhilabrus wrasses have outgoing personalities and this can be witnessed in the wild as they dart across the water column at lightning speeds stopping to observe the occasional human, give a glance and continue on their way. They are curious little creatures as well-on some of my dives I liked to lay still on the rubble rock and watch them closely as they approach my location with curiosity and caution. They will display these types of behaviors in a captive environment. As mentioned above, they naturally dart across the water column and when placed in an aquarium; they don’t seem to realize that the tanks they now live in has a limited amount of space. This is why it is critical to keep the open surface of the tank completely covered at all times — they are excellent jumpers. 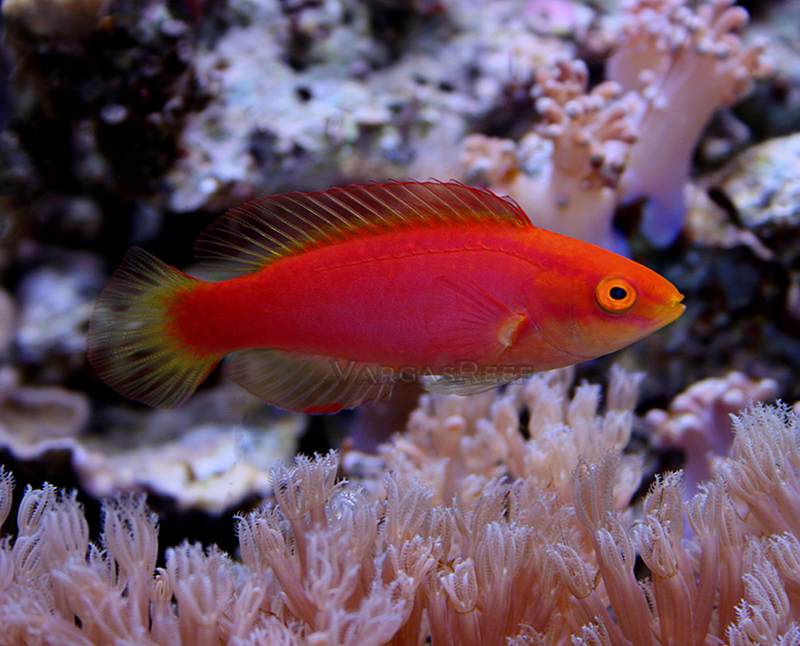 The largest female in the group.

Before you place this wrasse in your home aquarium it is advisable to acclimate and quarantine them properly as they often arrive with parasites. They recover well from this but must be kept away from stressful situations and this is why quarantine is most effective. They should be fed regularly, as a fish fed often can easily overcome parasites like ick. When the fish is ready to be placed in the display tank place it or them in a holding container for a day or two. This will allow the newcomers and the current residents time to observe one another. The new fish will also have a chance to observe their new surroundings.

Back in the early part of 2011 I obtained three female Flame Wrasses from Kevin Kohen at Liveaquaria.com and after a short quarantine period I relocated them into my 90-gallon aquarium, which contained a Striped Parrotfish (Scarus iserti). The Parrotfish attacked the new comers and would have killed the three Flame Wrasses if I did not react quickly enough and retrieve them before any permanent damage could be inflicted. With nowhere else to stow the trio I transferred them into a small 25-gallon Nano system, this had to make due.

Three months quickly went by and all three are getting larger and more colorful by the day, with no signs of aggression toward one another in this small aquarium. They were not the only fish in this system and with so much feeding taking place the system began to show signs of algae. The alga was taking hold but the corals were all doing well and water conditions were favorable. Nitrates hovered at around 2 ppm, calcium 380 ppm, alkalinity at 9 dKH, and pH at 8.0-8.1, with those readings there wasn’t any reason for concern. 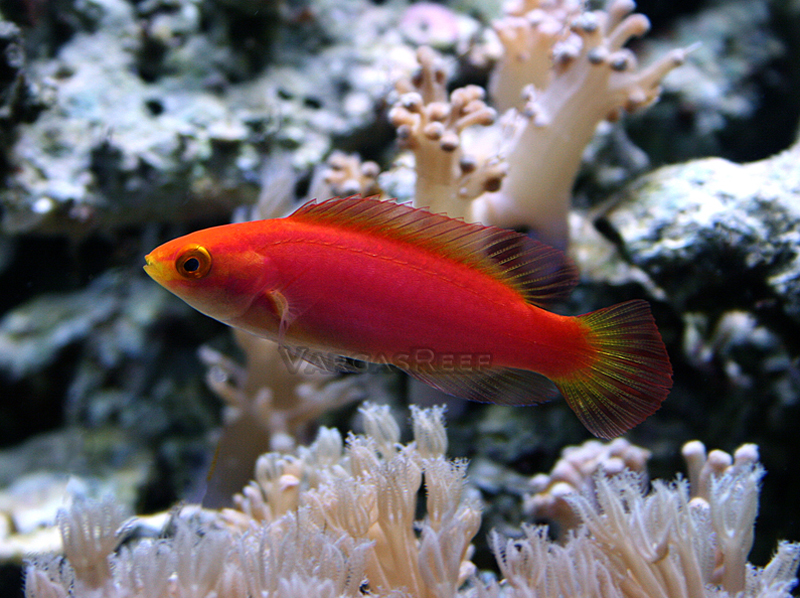 The smallest in the group but not by much.

All three of the wrasses had been in the Nano system for nearly three and a half months and the largest female has turned into a terminal male. Then one quiet evening the excitement started-one hour before the lights shut down-the terminal male started flashing and spawning with the two females. This spawning event continued nightly! What was most shocking was that this all took place in a tank too small to be considered an appropriate sized tank for these fish.

Most are aware of the spawning behaviors of Cirrhilabrus wrasses in the wild and how they will dart high into the water column and then rush back to safety, but in a captive environment this process is modified by the fish. Because of limited space the fish adapt to their surrounding and modify their spawning ritual appropriately. When the females are ready to spawn, they position themselves near an obstacle with sufficient water flow, such as a powerhead or the return near the surface. The male realizes that the females are in position, comes to their sides and bumps them. This impact releases many eggs and sperm into the flow of the return or the powerheads. It doesn’t take long before the male is excited again and is looking to spawn over and over again, but eventually the females tired and start to hide from the male.

Something we must consider: when a single female is confronted by one terminal male to repeatedly spawn she will become stressed by the consent advancements of the male. This will lead to a stressed female constantly avoiding the male even when the male is not seeking to spawn. A stressed single female will become reclusive and eventually die. It is for this reason that it is advisable to keep more than two females at a time with a terminal male. Yes, there are many that keep pairs of Cirrhilabrus wrasses together but the conditions are more favorable for spawning when the males maintain a harem of three or more females.

One of the biggest difficulties with spawning wrasses is removing the spawn material once the fish have completed their task. Let me explain: in the wild the fish spawn and rush back to safety in the rubble/rocks or among the branches of the corals. They are aware of the dangers and can easily become someone’s dinner if they do not rush back to safety quick enough. The eggs and the sperm move away and upward with the aid of the currents. In a captive environment these fish will turn around and start to consume their own eggs with vigor. I’m sure there are a few eggs that make their way to the overflow box and become filtered material. This is one of the obstacles fish breeder will have to learn to overcome if they attempt to spawn this genus.

Conditioning the fish to spawn is quite simple. The condition of the aquarium was kept the same as any small polyp stony tank worldwide. Water temperature was kept at 78°, specific gravity at 1.025 and photo period were targeted at 10 to 12 hours a day. They were fed frozen live foods such as H2O Cyclops, PE Mysis, San Francisco Bay Brand (SFBB) Brine Shrimp, SFBB Mysis Shrimp, SFBB Bloodworms, and refrigerated Reef Nutrition Arcti Pods. My fish favored the Arcti Pods and Bloodworms best but would eat the others when no choice was available. Interestingly enough, when their feeding regimens were changed the wrasses would react by increasing or decreasing their spawning behavior. When fed seven or more times a day the fish would spawn every night but when the feeding was cut back to four times a day they would not spawn daily. Another interesting observation I witnessed: when water temperatures reached 80°F and above these fish would not spawn.

For years we were instructed to keep these fish in larger spaces for success, but I firmly believe in pushing the boundaries a little to see what we get. These fish spawned in a 25-gallon system repeatedly, and yes some Cirrhilabrus wrasses will require larger spaces because of their size but it can be done!

I know I mentioned this above, but this genus is well known for their carpet surfing abilities-so it is advisable to cover the top of the aquarium completely, as they will find the smallest of openings.

In conclusion, many of the suggestions can and should be applied to all in this genus. Enjoy the genus in your reef aquarium as they are lively and vividly colorful.

The Way We Were: Propagating the Atlantic Neon Goby