Although this article will deal with my own experiences with surgeonfish dating back to the 1970s, before turning to that allow me to provide the reader with some information about the family of surgeonfishes, all of whom belong to the family Acanthuridae. Acanthuridae is Latin for the torn tail. The most distinctive characteristic of this family is its scalpel like spine located at the caudal peduncle. This spine is quite sharp and can easily wound another fish and or a careless marine fish keeper. Surgeonfish have relatively small mouths with which using a single row of teeth they graze essentially on various forms of algae. Surgeonfish are generally quite aggressive. It should be noted however that certain species are more aggressive than others. Surgeonfish engage in aggression usually to protect their food source. However, aggression for surgeonfish as well as other fish takes on two forms: one is intraspecific aggression the other interspecific aggression; that is, aggression directed at members of one’s own species and aggression directed toward members of other species. Aggression in surgeonfish is of particular importance for any aquarist planning on keeping surgeonfish in captivity, particularly when keeping more than one in a closed system. There will be a good deal more about this later. 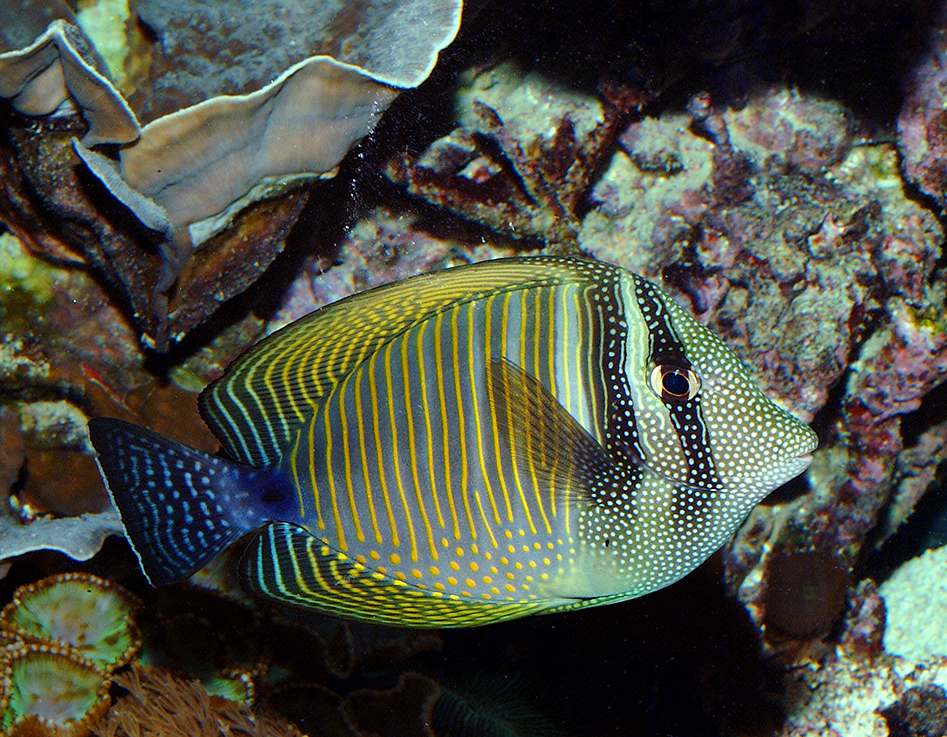 I started keeping creatures from the sea in glass aquariums in the mid-1960s. In those days, except for a few exceptions, mostly we tried to keep marine fish, in fish only aquariums. Generally, beginning aquarists started out with a sterile aquarium, into which marine fish were placed. After a few days these beautiful reef fish began to look poorly, and after a few more days they generally died. This unfortunate condition was termed the “new tank syndrome.” Without going into any detail, suffice it to say that eventually we learned how to inoculate these sterile tanks with beneficial bacteria so that these bacteria could break down toxic waste, into relatively harmless nitrate products. The fish themselves are the producers of toxic waste, primarily ammonia. 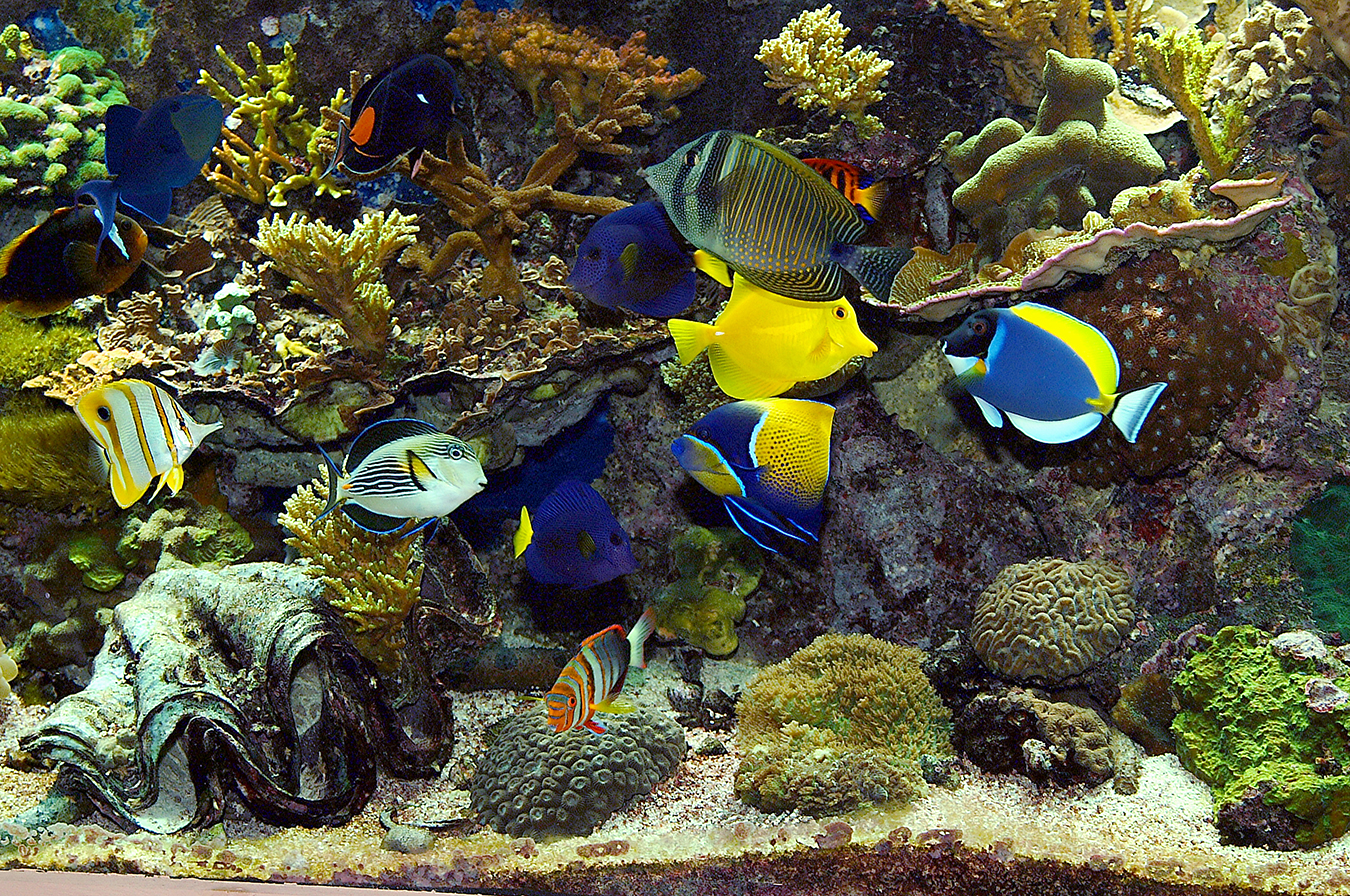 Unfortunately, that was only the beginning of our problems with keeping reef fish in captivity for any considerable length of time. By establishing beneficial bacteria we not only were successful at keeping reef fish alive we were also successful at establishing an environment in which parasites that utilized fish as hosts would be also kept successfully. Parasites in particular were responsible for wiping out an aquarist’s community of reef fish and often drove aquarists from our hobby. It was particularly painful to watch one’s reef fish become covered what looked like fine sand grains or grains of salt from protozoans like Amyloodinium ocellatum, more commonly known as Marine Velvet and Cryptocaryon irritans, commonly known as Ich. Once the body of the fish along with its fins were visibly covered with these parasites it was also true though not visible to the naked eye that these parasites were present in the gill issue of these fish and rapidly suffocated the host fish. 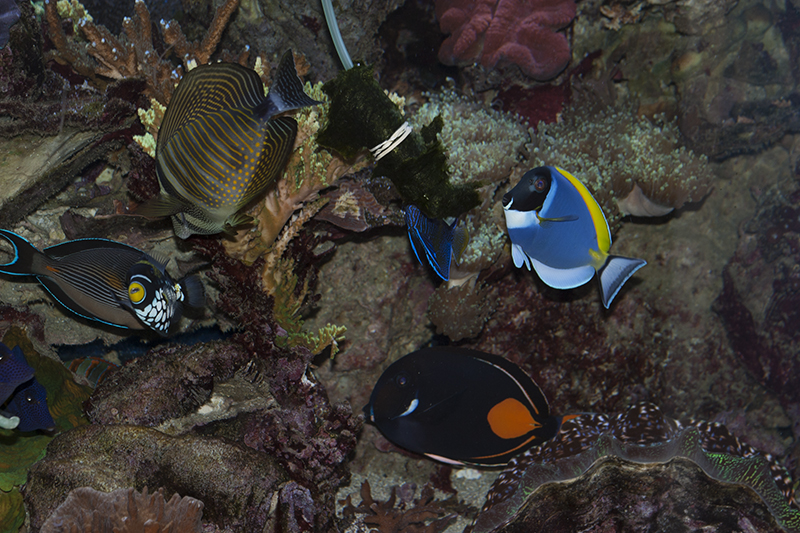 Some of the same fish grazing on Nori.

Obviously, we fought back. There were a number of medications that manufacturers sold with a promise that it would kill said parasites. In general, medications like copper and formalin, two of the best, had to be administered very carefully at a dose that was strong enough to kill the parasites but not too concentrated so that it killed the host fish as well. I’m sorry to say that the wars between the parasites in the marine aquarist’s aquariums more often than not led to the death of many reef fish. However, there were a few aquarists myself included that had some success.

In those days, the way to success with marine fish was to have a few fish in a relatively large tank and once these were established to never add a new fish. I recall there was an aquarist from New Jersey by the name of Jerry Riddler. He had about 30 tanks with one fish in each tank. Doing it this way he succeeded in keeping a number of Marine fish for more than 10 years. Whenever he found a fish that he had to have he simply set up a new tank. Most marine aquarists at this particular time in history didn’t have the kind of discipline that Jerry Riddler had. Typically, aquarists tried to maintain a fish only community tank, but invariably added a new fish which was followed by an often devastating outbreak of Cryptocaryon irritans or Amyloodinium ocellatum. The more experienced marine aquarists argued that it was absolutely essential to have a quarantine tank and to quarantine new fish for a minimum of four weeks. That of course helped, but was far from a guaranty. Typically, what happened was that the quarantined fish which appeared healthy when brought into the community tank was stressed by the move and somehow stressed the established fish resulting in a new infestation. I am of the opinion that parasites are almost always present, even though their presence may not be detectable. Once marine fish have a healthy and functioning immune system they are capable of keeping parasites at bay. I am also of the opinion, after many years of experience with these fish, that the way to keep fish healthy is with a fully functioning immune system, mostly dependent on an environment as similar as possible to the one in which they evolved; that is, a coral reef. I’m not aware of any quantifiable study that studied the resistance of fish to disease in a fish only environment compared to fish in an established reef tank. Whether it’s because fish have healthier immune systems in reef tanks or that parasites have a more difficult time surviving in a reef tank, where they are often food for invertebrates, I do not know. In fact, it may be a combination of the two, but my experience has shown me that fish are much healthier in reef tanks, especially established reef tanks. 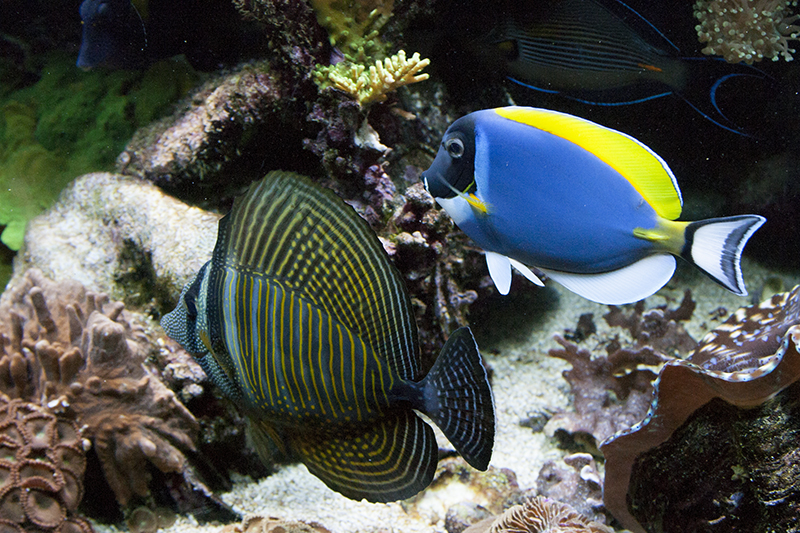 I set up my first reef tank early in the 1980s, and have never looked back — so to speak. In many ways surgeonfish are ideal fish for a reef environment. For example, Acanthurus desjardinii grazes actively on Valonia spp. This desjardinii , like all of the surgeonfish displayed in this article were members of various reef tank communities kept by me over the last 40 or so years.

My most successful reef tank was a 10-foot, 500-gqallon reef. Many fish lived in this tank for more than 10-years, and one Amphiprion frenatus was with me for over 20-years.

As you can see there are 6 surgeonfish in this tank; in fact, a pair of Red Sea purple tangs — Zebrasoma xanthurum. Although it is generally believed that it is difficult if not impossible to keep more than one of any particular species of surgeonfish in a hobbyist’s tank these two lived together for many years. I suspect that it was because they were introduced to the tank as juveniles – about the size of a half-dollar — and that the most aggressive of all of the surgeonfish in this reef kept everybody in line. Of course, I’m referring to the Acanthurus sohal.

When dealing with surgeonfish there are three subjects of particular significance: aggression, disease control, and diet. 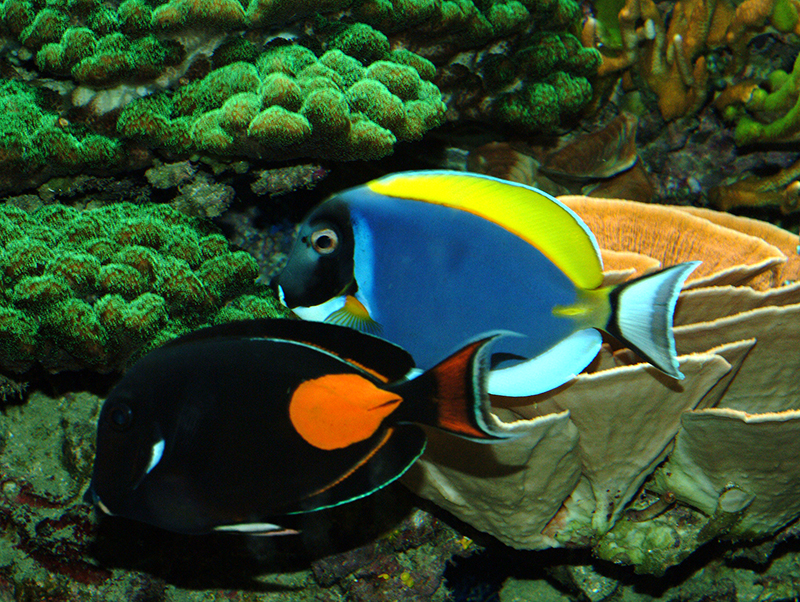 One more photo of my favorite pair of surgeonfish.

Aggression directed toward members of one’s own species is called intraspecific aggression. Aggression directed toward members of another species is called interspecific aggression. Intraspecific aggression is generally the most intense. Not surprisingly, aggression is most intense when directed toward other fish that have the same body shape, coloration, or pattern. It is important to keep this in mind when seeking to introduce a new fish to an established community tank, especially when introducing a new surgeonfish to a reef tank that has an established one. A good rule of thumb is to add the most aggressive and larger last. Trying to add a small Acanthurus achilles to a tank that has a established Acanthurus leucosternon would be disastrous. This is a general rule, and does not account for the idiosyncratic behavior of individual fish, and the behavior of extremely aggressive fish like the sohal surgeonfish. While keeping all of this in mind the reef keeper must quarantine the new fish for at least 4 weeks and until it is eating vigorously. If a reef fish is not a specialized feeder and is not interested in food it is in trouble.

When it comes to nutrition regarding surgeonfish, it is important to keep in mind that they are herbivores. Some inexperienced aquarists sometimes buy a surgeonfish from a dealer that will only eat brine shrimp or even mysis shrimp, which, in my opinion is a mistake. Over the years I have always fed my surgeonfish O.S.I. marine flakes – about 25% of the time – and O.S.I. spiruline 75% of the time. I also often tie some Nori to a floating piece of PVC for reef fish to graze on. However, I am of the opinion that it is a quality flake food with lots of vegetable matter that must provide the bulk of surgeonfish’s diet.

Surgeonfish need room, especially if the reef keeper wants to have more than one in a community tank. Although I had 6 surgeonfish in my old reef tank, keep in mind that it was 10-feet long. In the picture above it appears that the leucosternon and the Achilles are happily grazing together, but nothing could be further from the truth. Aside from when feeding one staked out the left side of the tank and the other the right side of the tank. The photo below shows how wary the desjardinii is of the leucosternon.

Surgeonfish are very susceptible to parasites, and as a result I would not consider a surgeonfish in anything but an established reef tank. As I suggested earlier the aquarist needs to do everything possible to place surgeonfish in an environment that supports the fish’s immune system. I suspect that it is fortunate that medications like copper cannot be used in reef tanks. I say this because in my experience medications used to kill parasites do more harm than good, and taking fish out of the reef tank to treat them also does more harm then good. A few spots on a newly introduced fish in a reef tank is not a cause to panic. Most of time, in a healthy reef tank, a newly introduced fish will rid itself of the parasites.  Thanks for listening!