The family Labridae is one of the largest fish families found on coral reefs, with over 500 species occurring worldwide. As you would expect, this is a diverse group whose members vary in appearance, behavior and captive care requirements. The hogfishes are some of the most aquarium-suitable of all the wrasses. These fishes comprise the tribe Hypsigenyini with the majority of species belonging to the genus Bodianus. There are 29 described species in the genus Bodianus, and a number of undescribed forms. Currently Dr. Martin Gomon, a labrid specialist, is revising the genus.

The majority of hogfishes are found on coral reefs and are most common in shallow to moderate depths (less than 40 m [130 feet]). However, there are some species that reside on rocky reefs, in subtropical and warm temperate waters. For example, the harlequin wrasse ( Bodianus eclancheri ), which are often koi-like in color, are only known from rocky reefs off the coast of Peru and Chile (including the Galapagos Islands). There are also a few species that are restricted to deep water. For example, Bodianus tanyokidus is a hogfish that has only been taken at depths greater than 100 m (325 feet) (Myers 1999). 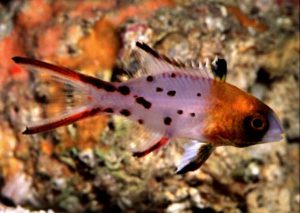 All the hogfishes are active predators, whose diets consist mainly of benthic invertebrates, including mollusks, worms and crustaceans. Adults of several hogfish species commonly associate with fish that feed by grubbing in the substrate (e.g., goatfishes), which stirs-up prey that are unavailable to most hogfishes. A number of Bodianus spp. act as facultative (part-time) parasite-pickers when they’re juveniles. The hogfishes are protogynous hermaphrodites (they can change sex, from female to male) and at least some species exhibit a haremic social structure.

In this article, we will take a look at three of my favorite species of hogfishes. I am a big fan of this trio of Bodianus because they’re attractive, they tend to do well in captivity, and they have interesting behavioral repertoires. So let’s begin our examination!

One of the most spectacular, and most divergent, of the hogfish species is Bodianus anthioides. It is easily recognized by its deeply incised to emarginate tail and its general form. In some ways it looks more like an anthias than a wrasse, hence its species name anthioides. The lyretail hogfish also has a bold color pattern, consisting of orangish-brown on the head and anterior portion of the body, with the rest of the body is white with black spots. Adults may display temporary, and possibly permanent sexual dichromatism and appear to be sexually dimorphic, with males attaining larger sizes than females.

This wide-ranging hogfish is found from the Red Sea to the Line and Tuamotu Islands, north to southern Japan and south to New Caledonia and Tonga. Of the three species discussed in this article, it is the largest, attaining a maximum length of 21 cm (8.2 inches).

The lyretail hogfish is found on reef faces, fore reef slopes, drop-offs and on the back side of barrier reefs and occurs at a depth range of 6 to 60 m (20 to 198 feet). It tends to prefer areas with rich coral growth. In the Red Sea, adults are often found in shallow, sandy areas on the back reef while small juveniles occur in deeper water where they commonly associate with the large sea fan, Subgorgia hicksoni. They feed on the small organisms that get trapped in the fan’s lattice-like structure. Juveniles are also facultative cleaners, setting up cleaning stations near sea fans or other prominent features on the reef. When feeding, larger lyretail hogfish often blow jets of water out of their mouth’s at the sand surface to uncover buried prey (this is known as hydraulic jetting). Adults also associate with goatfishes to consume prey items these fish flush out or expose with their chin barbels.

Although the lyretail hogfish is usually observed singly, it is probably a haremic species. I have witnessed the spawning behavior of this species in the Red Sea. At dusk, a male courted two females near the top of a large coral head. The male was larger than the females and differed in color. He was much darker towards the front of the body than the females, his head was rusty- brown rather than orangish-brown like that of the females, and the “cheek” area of the male had changed to gray. The male swam around the female with his fins erect, until one of the females joined him. The pair then swam, side-by- side, into the water column and shed their gametes. 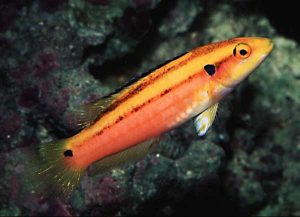 Although this species generally does well in the home aquarium, small juveniles can be more sensitive to transport stress and may have a more difficult time adjusting to captivity than large juveniles or subadults. In order to increase their chances of survival, smaller B. anthioides should be housed with docile fish species and provided with plenty of hiding places. Adolescents and small adults will readily adapt to aquarium life, but are quite active and need plenty of open swimming space. Although juveniles are usually quite peace-loving, once a larger lyretail hogfish is established in its captive home it may behave aggressively toward smaller or more docile tankmates. Moderately-aggressive tankmates, like groupers, hawkfishes, angelfishes, and some of the more placid triggerfishes can be introduced into a tank containing an acclimated, adult lyretail hogfish. Juveniles will often clean other fish in the confines of the aquarium (this can be fascinating to watch!). I would recommend a tank of at least 75 to 100 gallons in size for an adult individual.

Smaller B. anthioides can be kept in either a shallow or deep water reef aquarium. However, as they grow this fish will become a threat to worms, small clams and crustaceans. The hydraulic jetting performed by adolescent and adult individuals can help to stir the upper layers of soft aquarium substrate.

This is one of the best hogfish for the home aquarium. It is one of the smaller species, attaining a maximum length of 10 cm (3.9 inches). Bodianus bimaculatus belongs to the subgenus Trochocopus, which includes six other more slender-bodied hogfishes. These are: the redstriped hogfish ( Bodianus opercularis ) (Guichenot, 1847); the sunrise hogfish ( B. sanguineus ) (Jordan and Evermann, 1903); the striped hogfish ( B. izuensis ) Araga and Yoshino, 1975; Masuda’s hogfish ( B. masudai ) Araga & Yoshino, 1975; and the deepwater hogfish ( B. tanyokidus ) Gomon & Madden, 1981. There is also an undescribed species in this group (the next one we’ll discuss). The twinspot hogfish can be separated from all these species by its coloration. It is orange shading to yellow on the belly, with narrow red stripes on the body, a large spot on the gill cover and dark spot at the base of the caudal fin. The coloration of the juvenile and adult are slightly different. The twinspot hogfish attains a maximum length of 10 cm (3.9 inches).

The twinspot hogfish ranges from Mauritius and the Maldives to Papua New Guinea and north to southern Japan. It is a resident of sand slopes with scattered boulders, fore reef slopes and drop-offs. It occurs at a depth range of 20 to 60 m (66 to 198 feet), but is most abundant in water deeper than 40 m (132 feet). This species is usually found in small aggregations and sometimes mixes with the golden wrasse ( Halichoeres chrysus ).

This is a great aquarium fish. It will readily acclimate to life in captivity and its diminutive size makes it a better hogfish for the aquarist with a smaller tank. Although juveniles do best if housed with non-aggressive tankmates, as this species grows it will become more boisterous, and may bully, smaller more docile fish tankmates. It can be especially intolerant of other yellow, elongated fishes, like the golden wrasse (a species it commonly associates with in the wild!). The twinspot hogfish is most likely to assert its dominance over newly introduced fishes, especially in smaller tanks. When this hogfish behaves aggressively, it will often perform a frontal display where it spreads its gill covers forward so that the spots on the operculum are visible to its approaching rival. This may serves to increase its apparent size. Only one twinspot hogfish should be housed per tank unless your tank is large (e.g., 180 gallons or larger), and then you should introduce all individuals at the same time. It can be housed in tanks as small as a standard 30 gallon aquarium.

Because of its small size and its preference for more diminutive prey items, this is one of the best hogfishes for the reef aquarium. It does not feed on most desirable invertebrates, however, larger specimens may harass delicate shrimp or even larger shrimp species just after they have molted. Although it prefers deep water habitats, it will readily acclimate to the more intense illumination present in a shallow water reef aquarium.

About three years ago, a very beautiful hogfish started entering the North American aquarium trade with some regularity. This species was being collected from deep water in the Line Islands (namely Christmas Island). It is very similar to a hogfish I have been seeking for many years, the redstriped hogfish ( Bodianus opercularis ) (Guichenot, 1847). Bodianus opercularis was only known from the Red Sea to Madagascar and Mauritius, until recently when it was discovered in deepwater of Palau and Kwajalein in Micronesia (Myers 1999). It rarely makes it into aquarium stores. The undescribed Bodianus and B. opercularis are easily distinguished by their color patterns. The Pacific redstriped hogfish has a yellowish caudal fin with a red margin and the lines running down the body turn from red to black where they meet on the caudal peduncle. The Pacific redstriped hogfish attains a maximum length of at least 10 cm (3.9 inches) and may get even larger. (Its close relative, B. opercularis, is reported to reach a length of 18 cm [7.1 inches].) 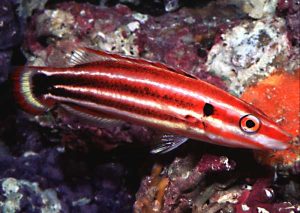 Besides Christmas Island in the central Pacific, the redstriped hogfish has also been observed in deep water off the Indonesian islands of Sulawesi, Flores and Bali. Rudie Kuiter reports seeing this species at depths between 20 and 50 m (66 to 165 feet) off Sulawesi, while off Christmas Island it is reported from depths greater than 60 m (200 feet). Kuiter reports observing a loose group, comprised of six individuals, along a wall with ledges and enormous sponges. It occurred in the same habitat with Burgess’ butterflyfish (Chaetodon burgessi).

I have kept the Pacific redstriped hogfish and found it to be a great display animal that readily adjusts to captive life. The individual I kept was relatively nonaggressive, ignoring butterflies, pygmy angels, cardinalfishes, larger gobies and a fairy wrasse kept with it. It also ignored a larger banded coral shrimp ( Stenopus hispidus ) until it molted, at which time the hogfish nipped all of its legs off. Although the specimen I had was never belligerent towards its tankmates, it did behave aggressively towards its reflection in a mirror I placed in the tank, indicating that placing two individuals in the same aquarium may be risky. It is also possible that larger individuals may eat small bivalves and crustaceans, including ornamental shrimp.

My Pacific redstriped hogfish became a great pet, swimming to the front of the tank when it saw its food source (me) coming towards the aquarium. In fact, it spent most of its time swimming about in the open. It was an aggressive eater that consumed any food dropped in the tank, including chopped table shrimp, frozen mysid shrimp, frozen preparations and flake foods.