Featured Aquarium: The Reef Aquarium of Eugene and Don Plotkin 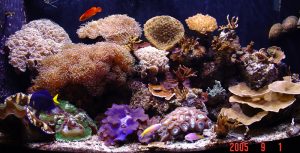 I would first and foremost like to thank Advanced Aquarist for selecting my reef tank as a Featured Aquarium.

I have always had a fascination with marine life, its beautiful colors, diversity, unusual life forms and its delicate balance. When ever I was around aquariums I could just stare at them for hours. In March of 2003 decided that it was time to get into the hobby of reef keeping. After reading a few books and websites on the subject of reef tanks and consulting with the LFS employees, I ended up getting the biggest tank I could realistically fit into my room. The tank is the very same that you are looking at right now.

When I decided to get 72 gallon bow front AGA tank, I needed to figure out what kind of filtration I would need. However being new to the hobby I was overwhelmed by all the equipment that was needed. That’s when an LFS owner introduced me to the “Miracle Mud” system. This sounded like a great idea to me because all the filtration would be done biologically, and I would not need a skimmer or any kind of supplementation reactor. I also thought it would be important to set up as natural reef environment as I could, the kind that would rely on itself rather then equipment. In the three years since the initial setup the system is almost exactly the same, with just a few minor adjustments here and there. The only problem with this system is that it would take a lot longer for it to establish itself. I didn’t add lights for the first 3 months or add any corals for the first 4 months, and didn’t start adding fish for 6 months. However after that things looked great and the tank grew and flourished into what you see today.

My goal was to recreate a natural reef, with the over all appearance of the tank being more important then any particular fish or coral. I used about 120 lbs of live rock to create the kind of look I liked. Since then I have not moved the rocks at all, because I knew with time it will start look natural as long as I would just leave it alone. For substrate I mixed sand with crushed coral to create 1″ deep shallow sand bed. All of the corals were purchased as small colonies or frags. In my opinion if you would like your tank to look natural, you must get corals small and let them naturally grow where they please. With that said I usually don’t move any of my corals unless absolutely necessary. 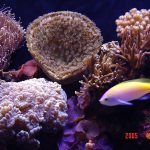 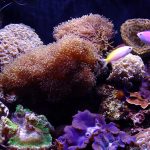 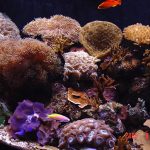 Lighting consists lighting is two 250watt 10K Coral Vue metal halides, and four 65 watt PC actinics. The schedule is as follows: 10am two of the PC’s turn on, 10:30am the other two turn on. At 1pm the metal halides turn on and stay on for 6 hours per day until 7pm, PC’s stay running for 12 hours (10pm and 10:30pm). All the lights are on digital timers to make sure the lighting schedule is precise. The metal halides and power compacts are on magnetic ballasts. Two 4.5″ cooling fans are on the entire time the lights are. 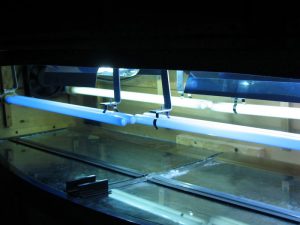 Most of the filtration is biological; it consists of a 20 gallon refugium with a 3″ deep miracle mud sand bed and Caulerpa macro algae. Lighting the refugium is a 25watt florescent light that stays on 24 hours a day, in order to make sure that Caulerpa does not go into sexual production. The display also holds about 120lbs of live rock that helps with breaking down waste. For chemical filtration I run two small bags of carbon, I also put a small bag of Phosban in a few of months ago. The only mechanical filtration is a 100 micron sock filter.

The whole system is driven by a MagDrive 12 (1200 GPH) submerged return pump, which sits inside the refugium. Drawing the water from the refugium, the pump passes it through a 1/10 HP Arctica Chiller before returning it to the tank. The chiller along with the cooling fans keeps the tank at 80 º-82 ºin the summer and at 78 º-80 ºin the winter. For maximum ventilation the chiller and the light ballasts are located outside of the cabinet. 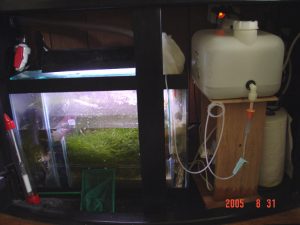 In addition to the Mag 12 return pump, two Seio 820 GPH power heads provide the water movement inside the tank. The power heads are positioned with the intent to provide more flow to the SPS side of the tank, and less to the LSP side.

As I have stated earlier I do not have any kind of a calcium or kalkwasser reactor. In order to keep up with the uptake of calcium, a 2.5 gallon kalkwasser top off drip is set up.

Having no rector, I have to make sure that the salt used to make water changes has high levels of calcium, alkalinity and magnesium. I am currently using Oceanic salt and have been happy with it for the most part.

I used to feed three times a day which included an entire cube of frozen food and flake food. After a while I figured I should cut back a little, so I started feeding the fish once a day with a quarter cube of Special Formula VHP frozen food, and a quarter cube of Formula One frozen food. Every 3 days or so I feed the fish Formula Two flake food instead of the frozen food. Usually I feed the fish at about 8pm after the metal halides turn off (I feed in small quantities to make sure all the food is eaten, it takes 3-4 times to feed all the food). I tried feeding phytoplankton, but stopped because I didn’t notice any difference in my livestock.

I carefully selected the most colorful and beneficial fish for my reef. It was very important that all the fish are reef safe, and not aggressive towards each other. 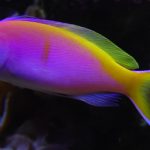 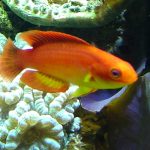 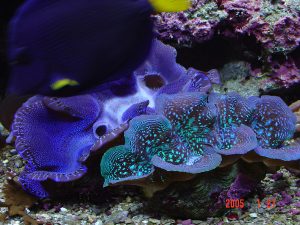 The clams are the main source of exotic color in the display and have been with me for almost two years. In that time the Derasa clam (located in the left hand corner) has more then tripled in size to become about 10″, and is running out room in this tank. The Maxima and the Crocea have also shown a substantial amount of growth.

I like to keep a mix of different hard corals, because I like the display they create together. The LPS corals have gotten very big over the last couple of years, as I almost don’t frag them unless they are killing each other. Some of the SPS have also shown tremendous growth, most notably the Purple rim Montipora Cap that occupies most of the bottom right corner of the tank, and is fragged rather frequently. I also have various types of mushrooms which really fill up the spaces between the hard corals. The mushrooms are however rather pesky, due to the fact that they grow out of control and have done some serious damage to some of the SPS colonies in the past. 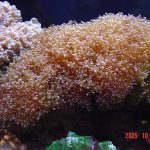 All of my SPS coral colonies were started as very small frags that I either traded or bought from fellow hobbyists. Rich (Jackson6745) also helped us out a lot with the SPS corals, so a big thanks to him! 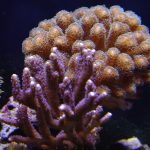 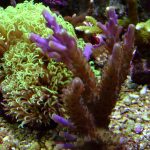 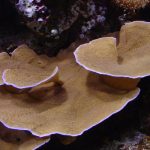 Weekly, I do a 5 gallon water change with Oceanic salt. Once a week I take out my 100 micron sock filter to clean it by putting it into the washing machine. I also clean the glass about once a week. Once a month I take out my pumps and soak them in vinegar for an hour and scrub the insides to clean out any calcium buildup that may have occurred. I also make kalk water once a week to use as top off.

This little window into the ocean that I have created was not done over night. It took a lot of time, dedication, patience and research by both me and my brother Don; to get the tank to what is it today. Since I have started this wonderful hobby I have learned a great deal of knowledge about marine biology, chemistry, as well as reef life in general. I would like to share what I have learned so far, to help others as many have helped me. Finally to my fellow reef keepers I would like to say: do your research and have patience, those two things have been the key to my success and will hopeful help you as well.