Freshwater Aquaria: Considerations for Scaping and Stocking the Paludarium, Part 2 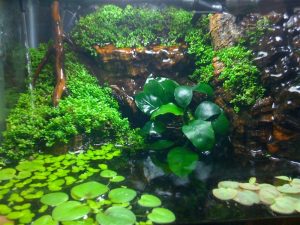 At the waters edge. Photo by Bill Brissette.

A paludarium is a type of vivarium that is specialized for the display of flora and fauna that live on, or very near, the bank of a body of water. Being modeled on many disparate habitat types, paludaria are capable of housing a great variety of livestock that can present conflicting husbandry requirements. Thus, the paludarist should–early in the planning stage–develop a clear picture of the physical environment he or she wishes to create.

The term “paludarium” is itself derived from the Latin root palud-, meaning “swamp.” However, paludaria are hardly restricted to swamp-like biotopes, and can indeed be utilized to represent habitats as diverse as floodplains, sandy beaches, ephemeral ponds, tide pools, wetlands, lake shores, mangrove stands, peat marshes, rocky streambeds, estuaries, or any habitat where aquatic and terrestrial life might mingle. 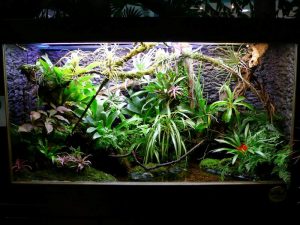 A great variety of bromeliads will flourish in a paludarium environment. Photo by Erich Sia.

Paludaria have an area that is flooded with water (i.e., a submergent section), but have a dry area (i.e., an emergent section) comprised of rock, sand, soil, and/or wood that typically serves as a substrate for terrestrial plant growth. All true paludaria (according to conventional standards) feature fully integrated submergent and emergent sections; systems like those termed “river tanks” and “aquaterraria” are generally not categorized as such for the reason that the two sections are more or less separated with partitions or basins. While the duality of the two fluid media (i.e., air and water) is clear enough, aquatic and terrestrial elements of the paludarium display are physically, chemically, and biologically inseparable. Distinction of the physical, chemical, and biological processes occurring therein as categorically “aquatic” or “terrestrial” is–more often than not–a mere matter of degree.

From a purely practical perspective, the designation of a biological exhibit as an aquarium, terrarium, or paludarium is not always straightforward, nor necessary. That having been said, reasonable qualifications might be a water level that is significantly below an enclosure’s full height (say, 25-75%), with an emergent section that displaces a significant amount (say, 25-75%) of the water surface. 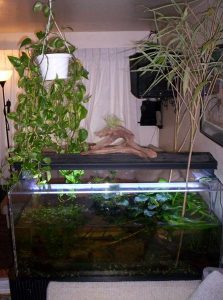 Plantings can extend from, and into, the paludarium enclosure. Photo by Kenneth Wingerter.

A paludarium is oftentimes described as a cross between an aquarium and a terrarium; however, because all fundamentals of both aquarium and terrarium keeping must be addressed, they are more aptly described as a combination thereof. It is for this very reason that these dynamic, multifaceted displays present as many challenges as they do possibilities.

While detailed instruction for the creation of every possible paludarium decorative scheme cannot be provided here–there are far too many for that–the process by which these systems are developed does merit some attention.

The paludarist will usually begin by selecting a particular habitat type to establish, or a particular set of species to keep (and thusly a type of habit by default). The selected habitat can be modeled after some natural environment (inclusively for diverse representatives of a distinct ecological community), or provide an idealized environment (exclusively for one, or several similar, species). The clearer one’s vision of the anticipated habitat type is, the more harmonious one’s husbandry strategy and aesthetic objectives will be. 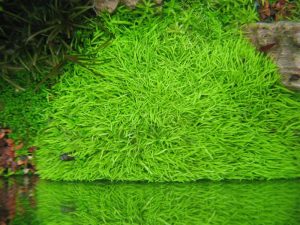 Reflective properties of paludarium surface waters can enhance the aesthetic quality of an otherwise modest subject. Photo courtesy of http://hidekisam.bp-creation.fr.

Most basic environmental qualities of a paludarium will conform to a model ecotype. Two such qualities, namely temperature and photoperiod, are related to latitude and can be denoted as tropical, subtropical, or temperate. Another such quality lies in its water chemistry–especially concerning salt concentration. Paludia can be modeled after freshwater, brackish, and marine environments.

While the paludarium layout will surely be influenced by the choice of habitat type, certain other factors will ultimately be of considerable consequence. To make the most informed selection of equipment (re heating/cooling, filtration, air circulation, etc.), the volume of each aquatic and terrestrial section should be calculated in early planning. The actual, rather than relative, size of each section of the paludarium will, of course, have a greatest impact on the health of the inhabitants; that is, a pair of killifish will probably fare better in a 20″x10″x12″ (10-gallon) paludarium with a 7-gallon aquatic section than in a 24″x12″x16″ (20-gallon) paludarium with a 5-gallon aquatic section. 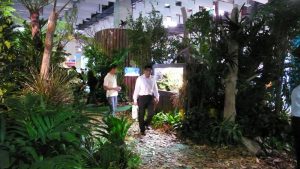 At the 2009 Taiwan International Aquarium Expo, the growing interest in paludaria was palpable, to say the least. Photo by Erich Sia. 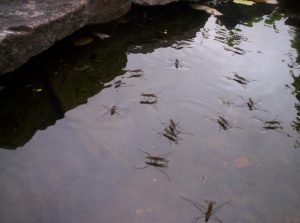 In some cases, aquatic insects, such as these water striders, can be captured and introduced to the paludarium to provide food and entertainment. Photo by Kenneth Wingerter. 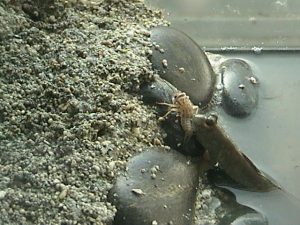 A mudskipper struggles with its prey at the waterline. Photo courtesy of Cetacean2007@gmail.com. 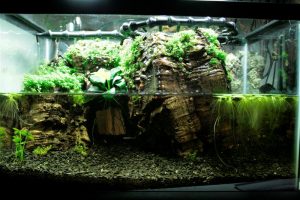 With an inspired arrangement of décor and water features, even a small paludarium can produce a grand impression. Photo by Bill Brissette.

Designing a paludarium can be a highly rewarding artistic endeavor. The inherently dual nature of these systems can lend a dramatic ambiance to even the most basic decorative scheme. The countless tiny ripples of falling rain drops, the trickle of water from a small fall, or a bloom gently bobbing at a foggy water surface are among a myriad of powerful aesthetic statements that can be conveyed at the air/water interface.

Paludarium scapes will typically be formed from the bottom up–that is, over a carefully selected substrate. Aquarium substrates are generally preferred to terrarium substrates for this in that they are fairly inert and cannot foul or cloud the water. The composition/grade of the substrate should be selected primarily on the basis of the needs of livestock, rather than its appearance. Ideal substrate depth will likewise depend on livestock needs. The substrate should not, however, be used to build up the terrestrial section; tall, steeply sloping banks of gravel or sand not only make a paludarium incredibly heavy, but also tend to flatten out over time and need frequent reshaping. Alternatively, a base for the terrestrial section can be formed (perhaps in multiple levels) from lightweight stone (e.g., lava rock), nylon bags filled with LEC (lightweight expanding clay) balls, or even blocks of Styrofoam. So-called false bottom bases can be made from screen and/or egg crate atop PVC feet. However it is constructed, the base of the terrestrial section should be reasonably stable and allow for adequate drainage. 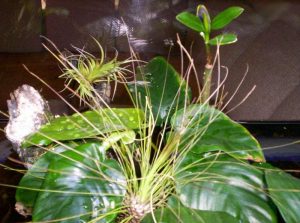 Unlikely neighbors, such as this Tillandsia sp., Anubias sp., and Rhizophora sp., might successfully cohabitate in a paludarium. Photo by Kenneth Wingerter.

Terrestrial substrates should not be easily washed out or waterlogged. Soils, if used at all, should be fully contained by a nontoxic, non-biodegradable liner (e.g., fine nylon netting or burlap cloth) and placed just above the water table. Terrestrial plants will usually grow well in a wad of rock wool under a moist (but not wet) blanket of peat moss, leaf litter, or other appropriate ground cover. “Plant walls” can be constructed out of hardware cloth or plastic screen and fitted to plastic frames, filled with soil and/or shredded coconut shell, and fastened to the back and/or sides of the enclosure. Coarse osmunda fiber can be glued or siliconed directly to the enclosure walls to provide a substrate for climbing plants. In some cases, mushrooms, lichens, and bryophytes can be encouraged to grow on wood or in ground cover.

Paludaria are capable of housing a diversity of flora and fauna that can rival that of a well-stocked reef aquarium. Numerous aquarium and terrarium species can be kept in paludaria; some species can only be kept in paludaria. Nevertheless, compatibility issues will restrict the number of species that can be housed in any given system. As evident from a glance at tables 1-3, conflicting environmental needs will quickly shorten a list of candidate specimens; potential for aggressive or predatory interaction might further shorten such a list. For example, caecilians might devour certain fishes, certain insects might devour certain plants, lizards will devour most ornamental insects, and most turtles are sure to devour most everything. 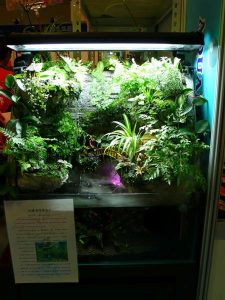 Attractive features, such as fog and falling water, can breath life into a paludarium exhibit (ceramic ornaments and colored lights are optional). Photo by Erich Sia.

Moreover, one might exempt a particular species due to the amount of time, effort, or expense required to properly care for it. Those who do not anticipate viewing their display at night might exclude nocturnal species altogether. Some species might be struck from the list simply on account of the likelihood that they will quickly outgrow the available living space.

It is highly recommendable to quarantine all animals prior to their introduction to a paludarium. This practice spares the paludarist from the potential difficulty of treating animals from within the display, and affords each new acquisition with a period of restful seclusion. Here, the number/quality of hiding places will be of greater importance than enclosure size. Oftentimes, it will be best to quarantine aquatic and terrestrial animals in separate holding systems. Each quarantine setup should be functionally equivalent to the display setup–that is, maintained at a similar temperature, pH, photoperiod, etc., but without regard for appearance. The animal(s) should be easily observed/accessed; the holding system should be easily cleaned/maintained. Hence, for this purpose, artificial plants and PVC “caves” in a bare-bottomed tank might be better than adequate. 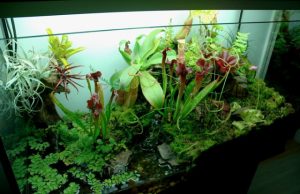 All of the constraints pertaining to habitat and specimen selection aside, paludarists have a wealth of interesting subjects to work with. A thoughtfully designed paludarium layout and discerningly assembled collection of paludarium plants and animals can be uniquely striking.

Though paludarium keeping is steadily gaining interest, it remains somewhat of a novelty. Consequently, there is scant pertinent literature to guide ones effort to successfully construct, decorate, stock, and operate these rather complex systems. That notwithstanding, advanced aquarium and terrarium keepers alike may find this relative lack of precedence to be nothing less than a great opportunity for discovery and innovation. 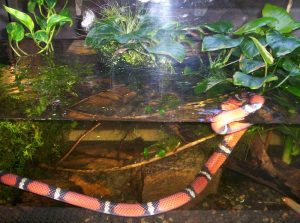 Some herps might enjoy a short-term visit (as for a bath) in a paludarium. Photo by Kenneth Wingerter.