Lateral Lines: D.I.Y. Give it a Try

Ever since the beginning of
aquarium keeping there has been aquarium experimentation. I think
we can all remember back to our first 10 gallon freshwater
aquarium. We enjoyed arranging the plastic plants, installing a
hang on filter, and turning on the light each morning. But of
course it didn’t end there. It wasn’t long before you
decided you could breed some mollies and sword tails, and maybe
even modify a hang on filter to serve as your new baby fish fry
growing tank. 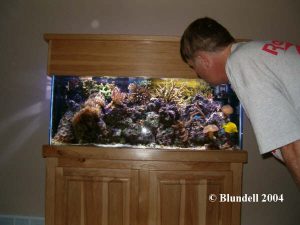 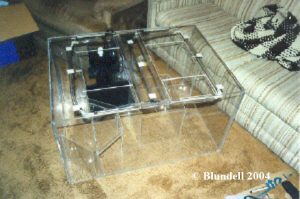 Here are examples of home made aquariums complete with custom
made acrylic dividers and supports. 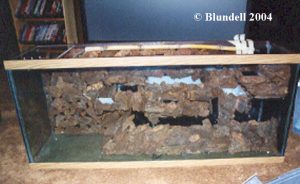 During the past decade this attitude has flourished among the
salt water reef aquarium keepers. The term Do It Yourself (DIY)
has become synonymous with reef keeping. In fact internet search
engines will often times direct more traffic to some hobbyists
websites by using the search word “DIY” than any other
word or phrase (author’s personal website statistics). With
the increased cost of mechanical equipment utilized in reef
keeping, there is of course more money to be saved by building
items yourself. However, the money saved from DIY projects is not
the real reason you should be experimenting with those projects.
I’ll get back to this later (in the conclusion section).

What Type Of Items Can You Do Yourself

What Are some Examples

I’ve seen so many items that people have made themselves.
It is unbelievable to see the ingenuity and creativity that takes
place in Do It Yourself projects. Additionally some projects may
be designed to replicate current products, without a personal
touch to the project. The following are simple examples, starting
from the most important reef aquarium items, to the fun additions
that fuel the hobbyist flavor. 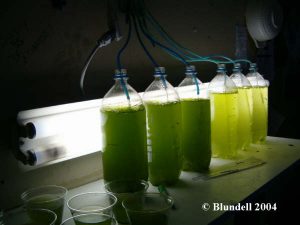 Phytoplankton cultures are of increasing popularity as more
and more hobbyists begin their own home brews.

Twenty years ago you couldn’t find someone with home made
aquarium. They were rare. Today a personal home made aquarium is
no further found than to a friend’s house in your local
aquarium club. Acrylic plastic fabrication is now a popular item
commonly used by hobbyists to build aquariums. Even glass tanks
are now being made by hobbyists to meet specific measurements to
best fit their place in the home. 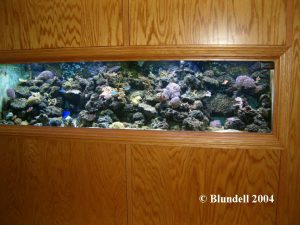 This showpiece aquarium was made by using one piece of glass
from a broken aquarium. The other five sides are made of
plywood. 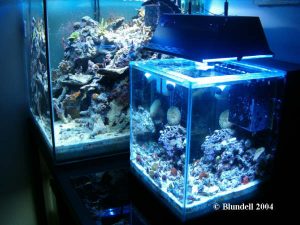 Renowned aquarium photographer Corey Kruitbosch captures his
amazing photographs in his two tank system, which he made himself
out of custom cut glass.

Now we’re getting away from acrylic and glass and now onto
wood working. Yes stands and canopies can be found at any local
pet store, but for many hobbyists the site of a stand in a store
sparks a thought “I could build one of those”, and so
they do. Often times the stands and canopies are simple (my
euphemism for crude looking) items designed for a purpose. Other
times these stands and canopies have intricate wood working to
display the showcase aquarium. Personally, I’ve had to
apologize to hobbyists after spending a half an hour looking at
their aquarium only to realize I hadn’t actually looked at
the aquarium (as I was preoccupied looking at the amazing stand
they had built). 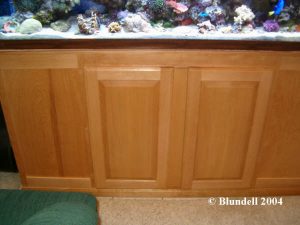 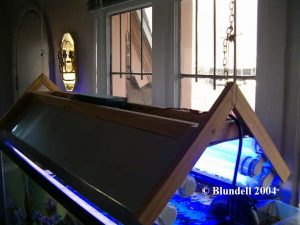 Some people may like the looks of this canopy. But for the
rest of us we can at least admit is serves its purpose. 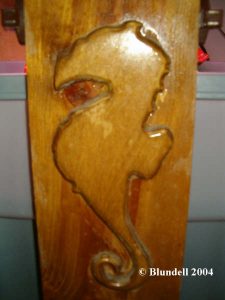 Some people just can’t find enough ways to show how much
they love seahorses. 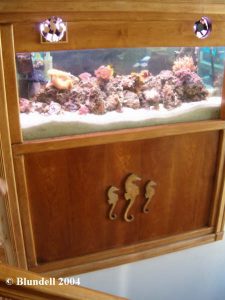 Is there a tank out there that doesn’t have home made
plumbing? If so, I haven’t seen it. 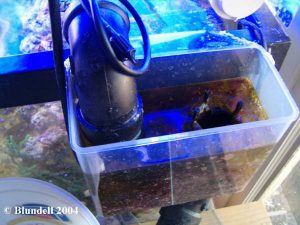 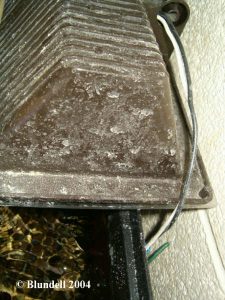 This hang on the back filter is shown on the author’s
aquarium where it has been converted into a hang on refugium. 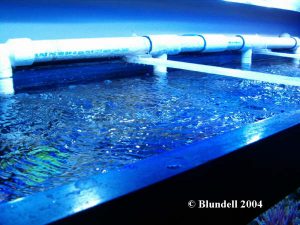 There is a group of aquarium items that are typically large,
costly, and used in the more advanced aquarium systems. These
items include protein skimmers, calcium reactors, and kalkwasser
reactors. 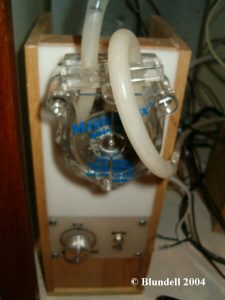 This is a home made kalkwasser dosing pump. 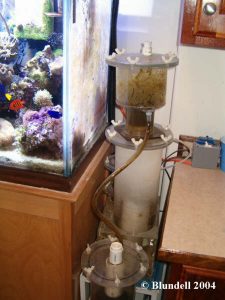 Even very large protein skimmers can be home made. 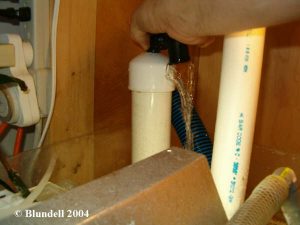 A very rare but nice addition to an aquarium is a carbon
filter.

They may seem like more advanced projects, but in fact they
usually have simple designs and principles. Local hobbyist clubs
often have demonstrations on these items as a way to show people
just how simple their construction is. Plans and diagrams on
these items can be found online or by asking around with a group
of fish friends. 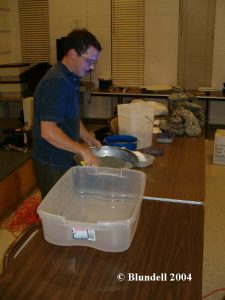 Chris Singley is shown here describing how he makes his
aragocrete rock structures. 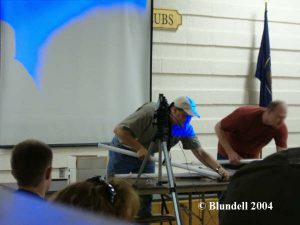 Small additions are items I consider to be a convenience or
simply something that “looks way cool”. Most of the
time these items are not made to save money, since the home made
construction may cost the same or more than a store bought
product. These items are just fun. Some of the most popular small
scale projects today are moon lights. 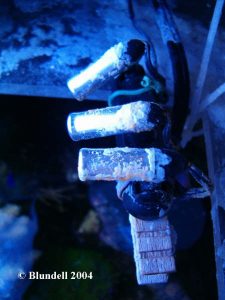 You may think using car interior lights held to a clothes pin
with a rubber band is a cheap way to make moon lights. Well,
you’d be correct, which is why this picture was taken of the
author’s moon lights.

Although moonlight is important in natural reef systems, in
all reality it doesn’t have a useful purpose in the aquarium.
Hobbyist try to argue that it does, but come on lets be honest
here. we like moon lights because they look cool. Seeing items
come out at night and seeing the blue nighttime glow, is simply
fun. Another small addition that is gaining popularity is small
float valves. These are typically installed in a sump area, and
allow for a constant water top off. These items can be made
cheaply, and do serve a purpose in the aquarium as a big time
saver for maintenance. 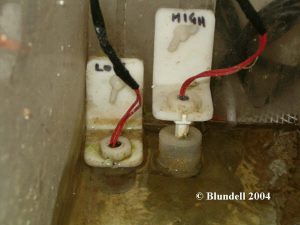 Float systems are growing in popularity. Just remember
eventually they will fail but don’t worry for you I’m
sure it will be many many years from now.

What are the oddities? They are things that didn’t fit in
any other category. Aquarium chemical expert Jon Finch makes his
own calcium and alkalinity test kit reagents. Also, algal turf
scrubbers, lighting pulley systems, refugia, and cooling fans are
also commonly found. 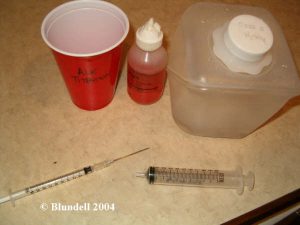 Not everyone has Hydrochloric acid in their aquarium supplies,
but home made test kits can be very informative on the processes
of water chemistry. 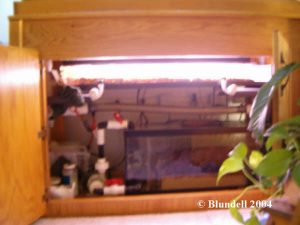 Here an algal turf scrubber is placed between the display tank
and the refugium below. 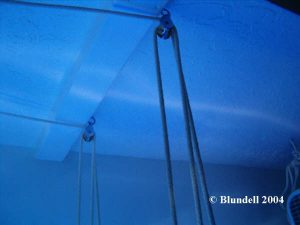 Having a lighting system on pulleys allows for easy
maintenance. 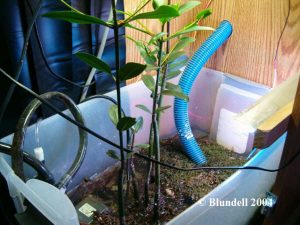 Refugia can be made acrylic, small glass aquariums, or even
plastic storage containers. 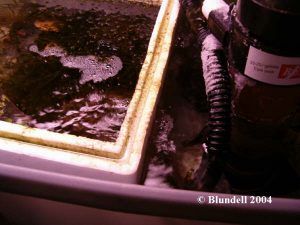 Here a picture of an internal Styrofoam refugia is shown. The
owner suspects that it may be the world’s first floating
refugium. 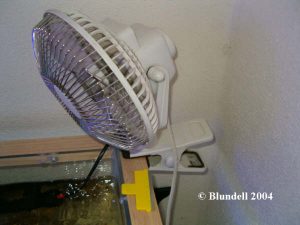 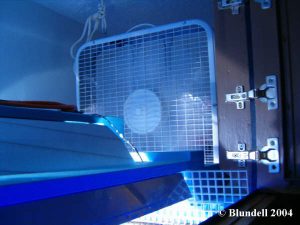 Fans of all shapes and sizes are bought at local stores and
are attached to aquariums. 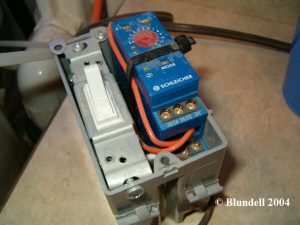 Timing relays can be wired at home to control aquarium pumps
for a wave making effect. 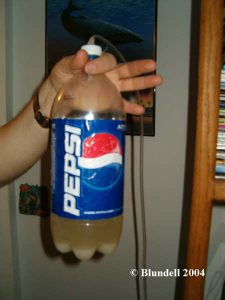 Sugar and yeast in a water bottle will provide months of CO2
gas bubbles using in aquariums.

If you happen to burn your house down, flood your basement,
shock yourself, or cause great bodily harm in the process of a Do
It Yourself project, the author and the publishers of Advanced
Aquarist Online Magazine claim no responsibility. Please consider
all such unfortunate events to be your contribution to the
scientific and experimental efforts of the marine aquarium
hobby. 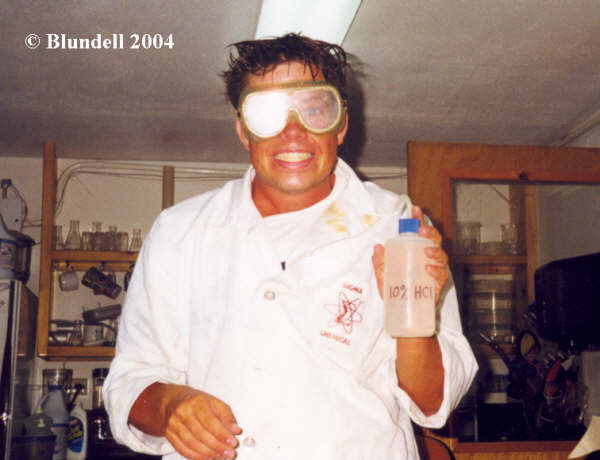 The author is shown here in his natural environment. working
in the lab.

I hadn’t paid much attention to the growing trend and
online discussion of DIY until something important was brought to
my attention. Expert reef keeper Shane Heil was explaining the
reasons for DIY projects to a group of hobbyists. I learned from
him the real key reason to taking on this adventurous attitude is
to simply learn more about your system. If you built your own
protein skimmer, calcium reactor, and water test kits, then you
are certainly going to know more about how your system works. In
reality, isn’t knowing more about your aquarium what this
hobby is all about?

This article is dedicated to my father Gail Blundell and to my
dear friend Mark Peterson. I can’t count how many times
growing up that I would tell my dad that I bought some new lights
and needed to wire them up. My dad would quickly run to the
garage and get out all of the electrical tools. Thanks dad. Mark
Peterson has spent a decade showing people that you can be cheap,
have a tank, and have a cheap tank. I’ve never seen anyone as
“super frugal” as Mark. The king of DIY he is widely
known for his 24 hour help line, always ready to help rig up
cheap tank.

Adam Blundell M.S. works in Marine Ecology, and in Pathology
for the University of Utah. While not in the lab he is the
president of one of the Nation’s largest hobbyist clubs, the
Wasatch Marine Aquarium Society (www.utahreefs.com). He is also
Director of The Aquatic & Terrestrial Research Team, a group
which utilizes research projects to bring together hobbyists and
scientists. His vision is to see this type of collaboration lead
to further advancements in aquarium husbandry. Adam has earned a
BS in Marine Biology and an MS in the Natural Resource and Health
fields. Adam can be found at adamblundell@hotmail.com.

Editorial And Featured Aquarium: The Aquarium Of Terry Siegel