Displaying a system for rare and delicate animals

Photographs by the author and also courtesy of Atlantis Marine World 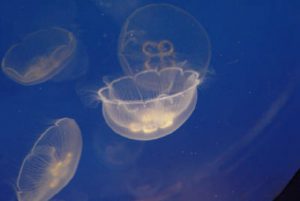 In a previous research project I explored the “do it yourself” aspect of creating a system for delicate animals (Blundell 2004). This project is a follow up intended to provide examples and encouragement for the care of seahorses, pipefish, juvenile fish, jellyfish and more.

The care of delicate animals is under constant improvement. As we learn more about the needs of various marine life our construction of captive systems improves. For example seahorses have historically been animals to avoid in captivity because “their unique husbandry requirements make them quite difficult to maintain and display” (Burhans & Melechinsky 2004). However a decade ago great progress was made in breeding programs for Hippocampus sp. by using kreisel systems like those described here. 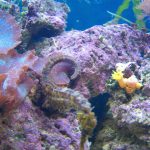 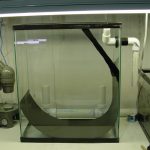 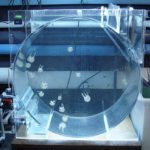 Currently there is a shift taking place. That shift is from the need for public aquaria to breed animals to a new found responsibility for aquaria hobbyists to conduct such efforts. This shift is demonstrated by public aquaria working to educate hobbyists. One of the most successful people in this field is Todd Gardner of Atlantis Marine World. Gardner has presented and described simple home systems for the use of jellyfish culture. Shown here are examples of Gardner’s systems. 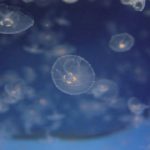 According to Gardner the most difficult aspect of jellyfish care is the need to feed, and the difficult in filtration (Gardner 2004). As with juvenile fish or seahorses “the increased bio-load in the tank leads to water quality problems” (Burhans and Melechinsky 2004). While biological filtration is increasingly popular many of these kreisels systems are set up without substrate to allow for siphon removal of waste
products. Foods for such tanks are highly variable depending on the animals being raised. In general most systems use small portions of enriched foods, rather than high quantities of standard foods to prevent excess waste. 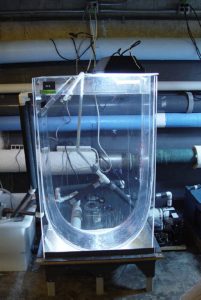 Overall appearance of the aquarium is another important factor to consider. Some of these aquariums are designed for a specific husbandry or culturing purpose. Likewise some of these aquaria are showpiece items of great aesthetic beauty. I think of this like the old biology saying “form vs. function”. 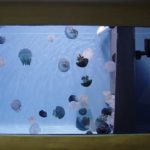 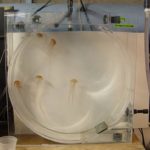 The needs of each animal being raised are also of great importance. In many cases water flow and turbulence need to be controlled which is why we use these systems. Additionally water speed, intakes, outputs, walls, other animals, are all items that need to be thought of well before adding animals to these systems. Remember these systems are not designed as ways to cure problems, but as ways to help provide optimal care.

The following pictures show the systems in action. The first picture is a picture from my previous article showing the construction of the kreisel. The second picture shows the same tank now in use four months later. Notice that the tank now has a glass fish bowl in the tank. This is useful as many small seahorses can be raised in these small glass bowls early on, and then these bowls can be moved into larger kreisel systems as is shown here.

Home aquarists can (and some have the responsibility to) care for delicate marine organisms. The examples shown here provide encouragement for the growth and reproduction of animals that were previously viewed as unsuited for captivity. With hope the future will bring these systems to a successful and common locale in the marine aquarium hobby. 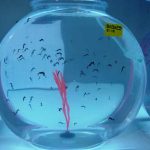 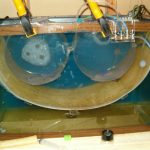 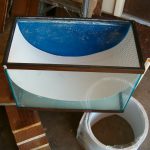 First off I would like to thank Todd Gardner of Atlantis Underwater World. Todd is a wonderful addition to this hobby and his willingness and ability to bridge the gap between public aquaria and home hobbyist are impressive to say the least. Secondly I would like to thank Bob Burhans from the Birch’s Aquarium at Scripps for his insight and knowledge about seahorse husbandry. He is not only knowledgeable but eager to help those who wish to contribute to the aquaculture of these ill-omened animals. Funding for this project was provided by The Aquatic & Terrestrial Research Team, and publication and support was generously provided by The Advanced Aquarist Online Magazine. 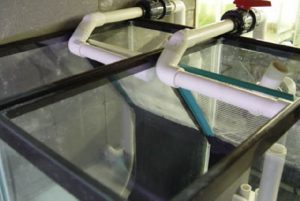 Adam Blundell M.S. works in Marine Ecology, and in Pathology for the University of Utah. While not in the lab he is the president of one of the Nation’s largest hobbyist clubs, the Wasatch Marine Aquarium Society (www.utahreefs.com). He
is also Director of The Aquatic & Terrestrial Research Team, a group which utilizes research projects to bring together hobbyists and scientists. His vision is to see this type ofcollaboration lead to further advancements in aquarium husbandry. Adam has earned a BS in Marine Biology and an MS in the Natural Resource and Health fields. Adam can be found atadamblundell@hotmail.com. 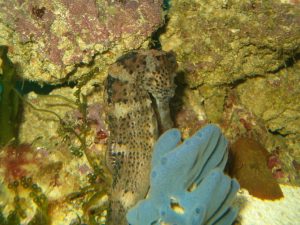