Reefkeeping 102: The Technical Side Of Things

If you’ve been actively reading and researching as you plan your first reef system, you are probably a bit overwhelmed by the sheer quantity of information, terminology and jargon coming your way. While I strongly encourage reef-keepers to gain a thorough understanding of the technical, chemical, and biological issues that go into maintaining a successful reef system, novices need to realize that they don’t have to know everything before they begin. What follows is the first part of an abridged and annotated glossary of terms and concepts I consider essential to setting up a successful reef system. This month, we begin with the technical side of things. 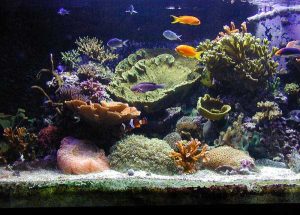 Algal Turf Scrubber (ATS)
This term refers to a system of filtration that relies upon the controlled growth of turf algae in a separate compartment attached to the main display that is regularly harvested as a primary means of nutrient export. This system is not in widespread use by hobbyists, but has become increasingly popular as a modification to the Berlin Method.
Berlin Method
This term refers to the reef-keeping system that is most commonly used in the hobby. This system relies on active protein skimming and ample quantities of live rock as the main vehicles for nutrient removal and recycling. Intense lighting, strong water movement and the maintenance of calcium and alkalinity levels via the use of a balanced supplement (Kalkwasser, a Calcium Reactor, or a two-part supplement) are the other key features of this system. As the name implies, this system was first developed in Germany in the 1970’s.
Calcium Reactor
This piece of equipment is an efficient and cost effective way to maintain balanced Alkalinity and Calcium levels in larger reef aquaria. The reactors utilize a calcium carbonate substrate and a re- circulating flow of water that has a controlled input of carbon dioxide injected into it. The carbon dioxide lowers the pH of the water and thus dissolves the calcium carbonate providing Calcium and Alkalinity in balanced proportions. The effluent from these devices is then slowly dripped into the system.
Chiller 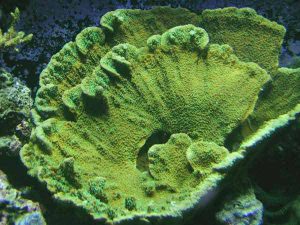 Essentially a small refrigeration unit that is plumbed into the main system and used to cool the water. They are expensive and not very efficient, but in some circumstances, they are the best means of preventing an aquarium from overheating. Modest drops in water temperature can be achieved through the use of small fans and controlled evaporative cooling.
Deep Sand Bed
The latest trend in reef-keeping philosophy, Deep sand beds refer to a 4-6 inch layer of aragonite sand seeded with biologically active “live” sand that serves as the primary site of nutrient recycling by bacteria and micro-organisms. Many hobbyists are reporting great success with this system, though more often than not, Deep Sand beds are being combined with more traditional Berlin Method techniques like Protein Skimming and Live Rock filtration. Key advantages to Deep Sand beds are the ability of the lower regions of the sand bed to process nitrate into harmless nitrous oxide gas and the tremendous increase in bio-diversity that active sand beds provide.
Granulated Activated Carbon (GAC)
Refers to a highly porous filtration media that is commonly used to remove pollutants from water. Organic molecules are removed from solution by chemical adsorption within the pores of the carbon. In reef systems, GAC is most often used to remove yellowing compounds from the water column that can interfere with light spectrum and intensity. There is an on going debate as to whether GAC should be used on a continual or occasional basis and whether it is best used passively or in a small carbon filter. Activated carbon becomes less effective when its surface is fouled by bacterial growth. 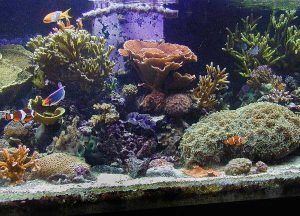 Kalkwasser
A German term that, literally translated, means “chalk water.” (See limewater)
Limewater
Limewater is a solution made by dissolving either calcium hydroxide (“slaked lime”) or calcium oxide (“quick lime”) in water. It is most often prepared as a saturated solution, by using a slight excess of calcium hydroxide or calcium oxide. It was the first balanced supplement for calcium and alkalinity used in reef aquaria. The use of kalkwasser was one of the major breakthroughs of the Berlin Method. Very cost effective, kalkwasser also has the added benefit of helping precipitate phosphate from seawater. Kalkwasser mixes to a high pH and should be slowly dripped into the system.

Metal Halide Lighting
High Intensity Discharge lamps that in the proper wattage and spectrum provide an excellent source of lighting for the reef aquarium. Which brand of lamp, and at which color temperature and wattage is the source of much debate. Suffice it to say there are many good options available.
Powerheads
Small water pumps that are commonly used in tandem with timers to move water and create currents in the aquarium.
Protein Skimmer
Also known as foam fractionators, these devices are very efficient means for removing dissolved organic waste from marine aquariums. A key piece of equipment in the Berlin system, skimmers come in a wide range of designs and sizes. In all of them, large quantities of very tiny air bubbles are forced through a column of aquarium water where the dissolved organic material and fine particles in the water adhere to the surface of the bubbles. As these bubbles rise to the surface they form thick foam that is collected and then discarded, removing the waste from the system. A drawback to these devices is that they also remove other valuable materials from the water, such as plankton. Consequently, some adventurous hobbyists have been experimenting with systems that do not rely on protein skimming.
Advertisement 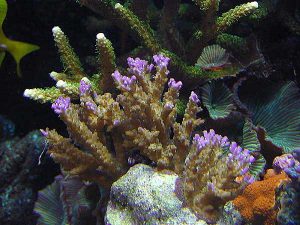 Reflector
Refers to highly reflective material (usually polished aluminum) that is inserted into lighting hoods to focus light downward into the aquarium optimizing useful lamp output.
Refugium
A small aquarium plumbed to the main display that houses a live sand bed, a vigorous growth of Macro algae, and is designed to optimize the growth of small planktonic creatures by isolating them from predators in the larger system. These in turn provide bio-diversity and food to the main display. Not an essential component of a reef system, but as more research is done into the nutritional requirements of reef organisms, refugiums are becoming more and more popular.

Reverse Osmosis / De-ionizing Filters (RO/DI)
High quality filtration systems used to purify tap water before it is mixed with salt or added to the aquarium for evaporative top off. Most municipal water supplies contain unacceptable levels of Nitrate, Phosphate, Lead, Chlorine, Copper etc. It is critical that these impurities are removed as some are toxic to reef organisms and others fuel algal blooms that can quickly overtake a reef display. Again, there are many brands and many configurations to fit most applications.
Sump
Refers to an auxiliary container plumbed to the main display (usually housed below it) that is used to extend the water volume of the system, and to house much of the unsightly equipment such as heaters, water pumps and carbon filters. Sumps can be elaborately designed and purchased ready-made or simply consist of another aquarium or even a rubber tub. Sumps are not essential to reef aquariums, but they are very convenient and useful additions.
Two-Part Calcium / Alkalinity Supplements
A fairly recent introduction to the marketplace, the two part supplements offer the easiest and most convenient way to maintain Calcium and Alkalinity levels. Simply measure the appropriate amount of both parts of the product and slowly dump them into the system one after the other. These supplements tend to be the most costly way of maintaining Calcium and Alkalinity, so you do pay for the convenience. One word of caution is that the use of these products will gradually increase the salinity in the aquarium. The aquarist must vigilantly monitor the aquarium’s salinity, and periodically remove an appropriate amount of aquarium water and replace it with pure topoff water to dilute out the excess salt added when these products are used.
Very High Output Fluorescent Lighting (VHO)
Fluorescent bulbs that run on special ballasts and have an output that is significantly higher than normal tubes. It is very possible to run an entire reef system on VHO lighting providing the proper number of bulbs and mixture of spectrums are chosen. For most hobbyists, these tubes are used in conjunction with Metal Halide lighting for simulating dawn and dusk. They often provide the “bluer” end of the light spectrum and thus a more aesthetically appealing display.
Water Pumps
These are pretty much what they sound like-pumps that are used to move water– primarily from the sump to the main display and/or protein skimmer. Water pumps can be either submersible or “in-line” external models.

While this list is far from exhaustive in terms of the technical concepts and gadgetry available to reef aquarists, I think it fairly represents the nuts and bolts of most successful systems. Once you have a working knowledge of these terms you can begin to make informed decisions about the specifics of the system you intend to build, and begin to make sense of the debates about which items you need, which ones to buy and how best to use them. Next month we’ll continue to build our glossary and look at terms specifically related to the chemistry and biological requirements of captive reef systems and their inhabitants.