Aquarium Lighting: Moonlight – A Concise Review of Its Spectrum, Intensity, Photoperiod, and Relationship to Coral and Fish Spawning

While a great deal of interest has been shown in the characteristics of artificial daylight for reef aquaria, very little attention has been paid to the other natural illumination – moonlight. Although manufacturers have marketed moonlight simulators for a number of years, I’ve yet to see an in-depth discussion of the subject. This article will attempt to address that issue while discussing some misconceptions about lunar light. In addition, we’ll define spectral characteristics of moonlight, light intensity, and length of natural lunar photoperiod, and ways to simulate moonlight. We’ll also examine the effects (or non-effects) of moonlight on timing of coral spawning (and comment, albeit briefly, its effects on fish spawning behavior). 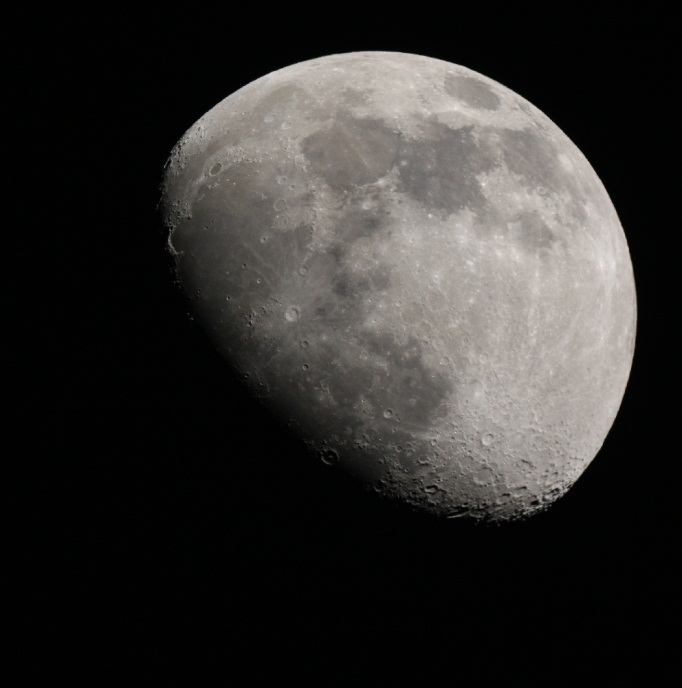 As we know, the lunar cycle consists of 29.5 days and is the basis for our calendar month. The lunar phase changes in a predictable manner and is due to relative positions of the moon, earth, and sun. Phase is not due to the earth’s shadow falling upon the moon (this is referred to as a lunar eclipse). Figure 1 shows phases and approximate and approximate days of the lunar month.

Figure 2 shows the hours of potential moonlight in Hawaii. Data are based on times of sunrise/sunset and moonrise/moonset.

Figure 1. The lunar cycle along with comments on the spawning activity of stony corals Pocillopora meandrina (as well as P. eydouxi) in Hawaii. The numbers above the moon phases indicates is the approximate time of the cycle in days. The red bar is the window for potential coral reproduction during the spawning season. 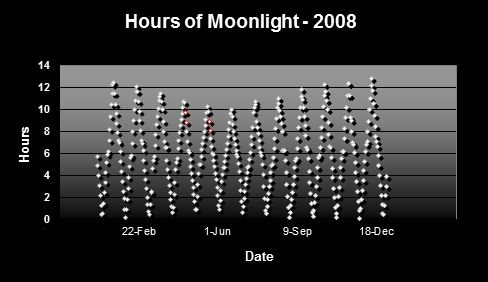 Figure 2. Hours of moonlight in Hawai’i (latitude N 1938′). Red dots indicate major spawning events of Pocillopora meandrina and Pocillopora eydouxi in waters off the west side of the Big Island of Hawaii.

Since moonlight is almost entirely reflected sunlight, one might reason that the moon’s spectral signature is exactly that of sunlight – it is not. Data shown in Figures 3 & 4 reveal that moonlight is less blue and redder than sunlight (and this measurement was taken with a ‘silvery’ moon at its zenith. We often see a much more orange moon at moonset). 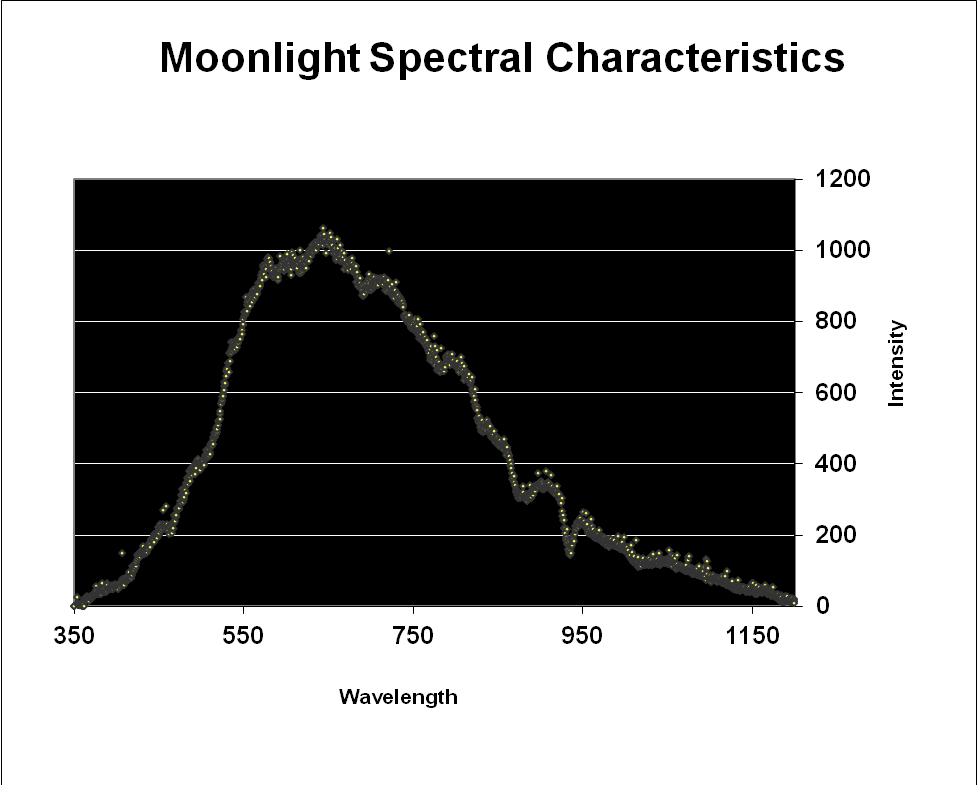 Figure 3. Moonlight peaks in the red portion of the spectrum (643nm) but appears ‘silvery’ when at its zenith on a clear night. 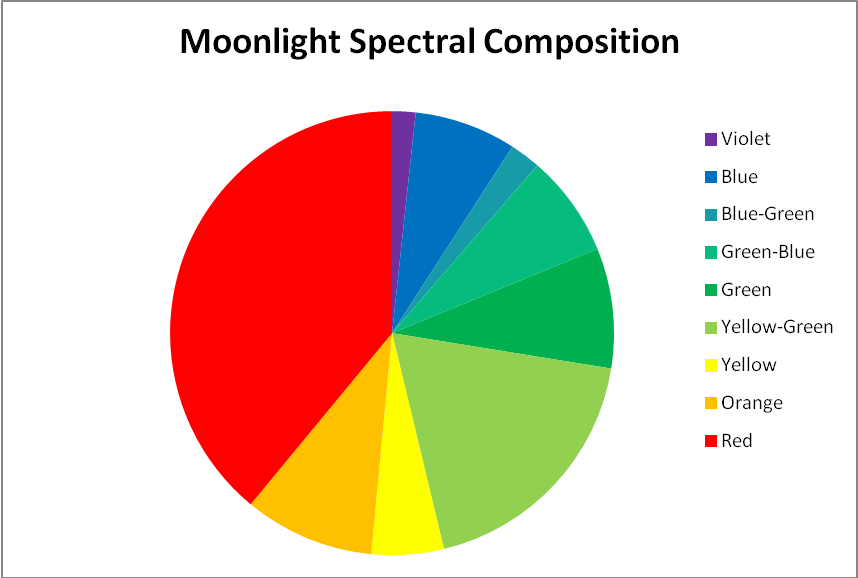 Figure 4. A breakout of the moon spectrum shown in Figure 3. 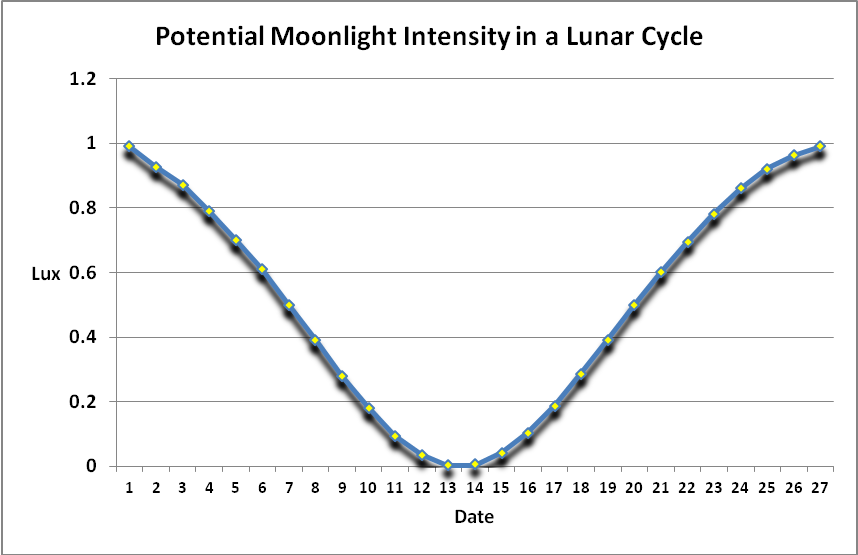 Figure 5. Light intensity of the moon during a month under ideal conditions. 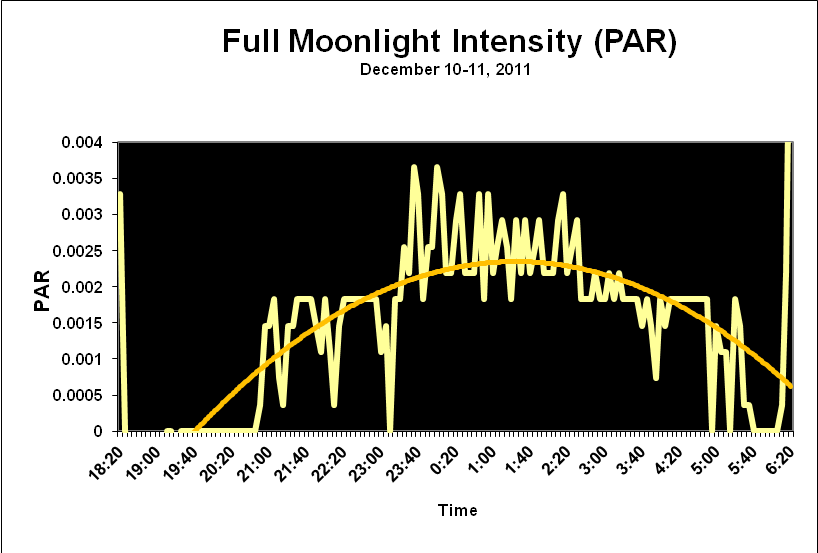 Figure 6. Actual light intensity of a December full moon in Kailua-Kona, Hawaii as recorded by a PAR data logger. Thin, high level caused the moon to have a halo and reduced intensity. 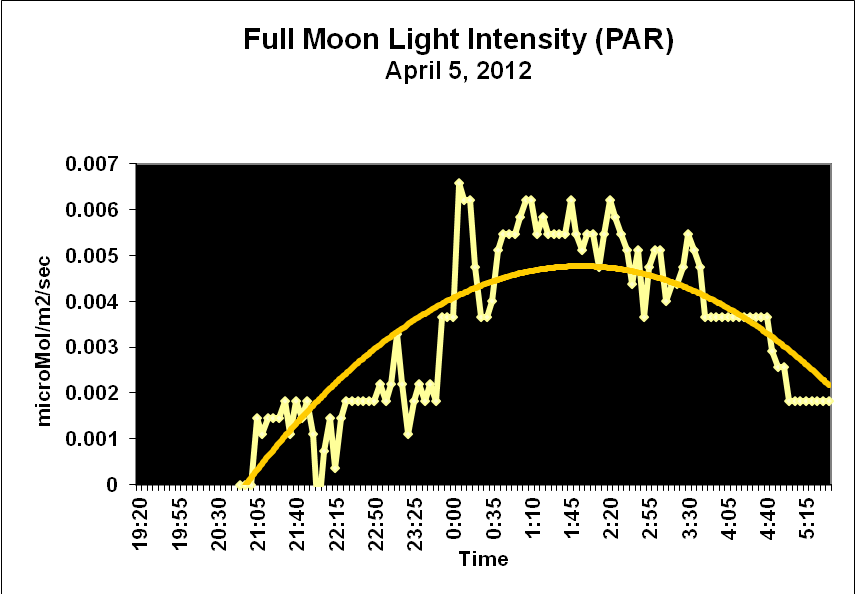 Moonlight is but one factor influencing coral reproduction. If other factors (nutrition, physical parameters, etc.) are correct, these are believed to be important:

Temperature: Temperature seems to exert powerful control over coral reproduction. If the temperature is too high, coral health can suffer, while cool temperature may delay spawning until the next month’s window (Hunter, 1988; Riddle personal observations). Temperature has been stated to be the influence of paramount importance in the reproductive cycles of marine invertebrates (Olive, 1995). In Hawaii, the temperature threshold is about 75F (24C; Dr. Paul Jokiel, personal communication).

Moonlight: Lunar cycles set the date of spawning in many coral species and the lunar calendar can be used to accurately predict it.

Daylight Photoperiod: Solar photoperiods influence coral reproductive efforts and set the hour and minute of spawning (Vize et al., 2008). The time of sunset is the fine-tuning factor for many marine invertebrates including at least some sponge and coral species.

Corals Don’t Have Eyes – How Do They Sense Light? And What Do They See?

Gorbunov et al. (2002) found blue light at about 480nm (110nm width, half maximum) at very low light intensity caused a reaction among coral tentacles,although a description of photoreceptors involved was not part of the experiment.

*Rhodopsin is a photosensitive pigment found in many animals’ eyes (including humans) within receptors called cones. Cones and their rhodopsin content enable us to see in very low light conditions. Rhodopsin collects light in wavelengths of about 400nm (violet) to red (at ~600nmn) but most strongly in the blue-green portion of the spectrum (Hunt, 1987).

**Cryptochromes (Greek for ‘hidden color’) are proteins sensitive to blue light and are found in photoreceptors of plants and animals.

The act of coral spawning involves production of a number of compounds, and this may be the result of entrained rhythms or exposure to external stimuli. For our purposes, entrained rhythms are those that occur without external stimuli such as sunlight or moonlight. These are likely controlled genetically. Environmental factors (such as like or moonlight) can influence the production of compounds. Vize et al. (2008) found photoreceptors signal production of proteins important in annual spawning of the stony coral Montastrea cavernosa.

Many fishes are known to spawn synchronously around a certain lunar phase and this timing may be species-specific. For instance, Takemura et al., 2004 discuss lunar phase and spawning of the golden rabbitfish (Siganus guttatus). These fish did not spawn when subjected to constant illumination, and those held in conditions of total darkness at night displayed altered spawning patterns. Pressley (1980) described the relationship of lunar phase and reproduction of the yellowtail damselfish, Microspathodon chrysurus. 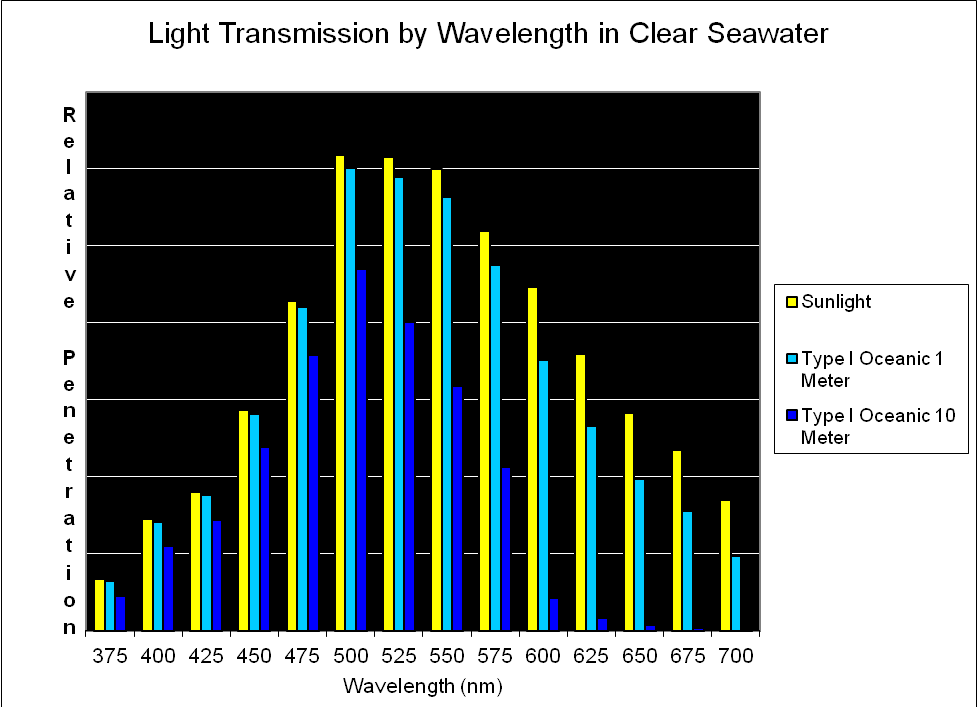 Figure 8. Transmission of light (by wavelength at 25nm intervals) through the clearest of seawater (Type I Oceanic; after Jerlov, 1976). Note that blue-green light at ~500nm penetrates this water the best.

It is an interesting notion that circadian rhythms play an important part in fish reproduction and that accurate simulation of lunar phase may be an important factor.

As mentioned earlier, several researchers have found that some corals respond to blue light. It is perhaps not by coincidence that maximum penetration of light occurs at about 480-500nm. See Figure 8.

Moonlight is commonly believed to be one of the deciding environmental factors for timing of coral spawning. Jokiel (1985) examined numerous Pocillopora damicornis specimens and concluded planula release occurred around the time of the full moon. However, Hunter (1988) experimented with two Hawaiian Montipora species (M. verrucosa = capitata and M. dilatata) and found the following:

It is usually impractical to expose an aquarium to moonlight hence artificial means are preferred. In my 1995 book, The Captive Reef, I outlined a means of simulating moonlight with a blue incandescent lamp and a manual dimmer. Technology has come a long way since then and light-emitting diodes are now the preferred method. See Figure 9.

Figure 10 shows the typical spectral quality of a LED peaking in the blue portion of the spectrum at ~450nm. 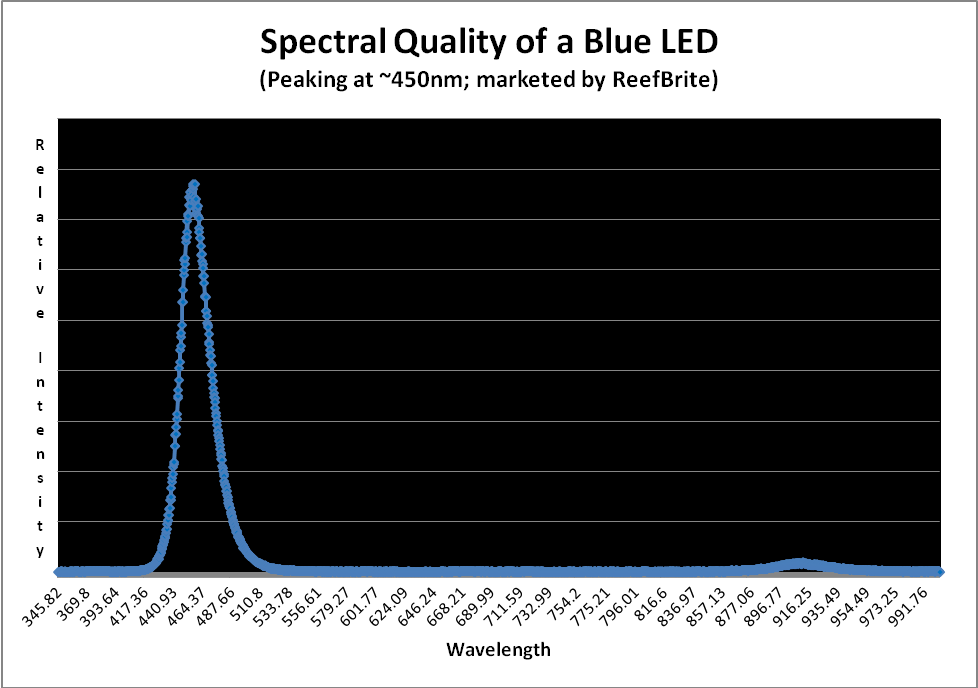 There are a number of controllers on the market claiming to simulate timing and variable intensity of natural moonlight. This article is not intended to review all those available. Instead, I describe the one I own – the tunze Multicontroller 7095. This device’s main function is that of controlling tunze pumps but includes a LED for moonlight simulation. The only thing a hobbyist has to do is turn the moonlight LED on when the real moon is full and the controller automatically does the rest. A photo-sensor will turn the LED moon on when the aquarium lights go out and lunar phase intensity is controlled over a 29 day cycle. See Figure 11 for a close up view of the photo-sensor/LED and Figure 12 shows the spectral characteristics of the LED.

Figure 11. The photosensor of the Tunze 7095 Multicontroller is housed in clear acrylic. When the lights go out, this sensor automatically turns the LED on (in the black tube to the right) and vice versa. This assembly is less than 2 inches (5cm) long.

Figure 12. Spectral quality of the Tunze LED moon. It is full-spectrum, with peak intensity at about 460nm.

Many corals contain photoreceptors (note their ability to almost always grow towards light). Some demonstrate responses to blue light, while at least one species can sense both blue and red light. Some show no response to light.

Moonlight is thought to play an important role in timing reproductive cycles of many coral and fish species. In corals, lunar cycles set the date of spawning, while the time of onset of darkness fine tunes the cycle and decide the hour and minute (then a release of hormones into the water induces mass spawning). An altered lunar phase may at least temporary disrupt spawning synchrony among at least some coral species. Lunar periodicity seems to play a role in timing of reproduction among at least some fish species. Interestingly, short term exposure of some fishes to constant artificial moonlight may have prevented spawning, while the same did not affect the patterns in some corals. It seems apparent that different taxa are affected differently by altered moon phases, if only temporarily.

Although moonlight appears white or silvery, use of LEDs producing blue light to simulate moonlight is, at least for some coral species, correct based to peer-reviewed evidence. Use of LEDs producing white light is likely to be OK as well, since these diodes are essentially blue LEDs doped with phosphors that fluoresce longer wavelengths. However, the light intensity of the light produced by even a single blue LED has the potential to be brighter than natural moonlight measured here in Hawaii. Light penetration in aquaria, with their usually shallow (and hopefully clear!) waters, should not be an issue, so using LEDs with a maximum wavelength of 450 or 460nm may actually be an advantage due to their lower output at 480nm.

Since most PAR meters’ minimum respond is ‘1’, these units are useless in determining proper placement of a light source in order to mimic natural moonlight intensity. On the other hand, a lux meter can measure moonlight at its maximum intensity although the reading will be ~1. Hence, placement of the LED for providing proper intensity will likely have to be estimated visually. At present, the effects of over-illumination of a reef aquarium at night are unknown but it is possible that it might affect fish or invertebrate spawning behavior.

A number of controllers with abilities to simulate lunar phase are on the market. In absence of one, a handy hobbyist can make a manually-controller lunar simulator with a low wattage incandescent lamp and a rheostat.

Spectral characteristics of the moon and LED were measured with an Ocean Optics USB2000 spectrometer and SpectraSuite software. Data were downloaded to an Excel worksheet for post-processing. Moon intensities were recorded by a Li-Cor 1400 quantum meter/datalogger and cosine-corrected quantum sensor.

Thanks to my brother David for supplying the photograph of the moon.