In the movie The Medicine Man, Sean Connery portrayed a physician who is sent into the deepest rain forest in search of new tropical agents. His job was to comb through the endemic plant life in search of new drugs, particularly anti-cancer agents that could be used in modern medicine. As the movie unfolds Sean Connery has stumbled upon a plant extract from a bromeliad (a pineapple-like plant) which cures tumors in his lab mice, only to find out greedy land developers are slashing/burning the only area in the world where this plant is found. The bottom line is when this great natural resource is gone, so to is the potential for many of these new medicines.

The above paragraph sets the premise for this column; many of the world reefs contain just such bioactive agents. Scientists are scouring the sea in search of medicines that may work better than conventional drugs with fewer side effects. As an example nature has provided many effective anticancer agents in current use, such as the microbial derived drugs; bleomycin and doxorubicin; and the plant-derived drugs, topotecan, and taxol. The search for novel anti- tumor agents from natural sources continues through collaboration among scientists worldwide in the investigation of coral reefs, and deep subsurface thermal vents for novel bioactive compounds. The potential for drug discovery is further enhanced by recent advances in procedures for microbial cultivation and the extraction of nucleic acids from environmental samples, resulting in the identification of novel microbes that provide a vast untapped reservoir of genetic and metabolic diversity.

For the remainder of my presentation I would like to discuss novel applications and bioactive molecules found in reef dwelling marine organisms (particularly, the ones we keep in our reef tanks) that have shown to possess beneficial therapeutic qualities [1, 2a,b].

Coral skeletons: Coral skeletons are currently used in bone replacements in reconstructive surgeries. Coral structures have a very regular and extensive interconnected pore system, and appear as biocompatible as hydroxyapatite (the current standard for use in bone implants), in the formation of potential bone replacements. In preliminary studies, coral skeletons have been implanted into patients and examined for the shape of new bone, vascular patency, and induction of bone. Upon examination all grafts had viable tissue, and heterotopic bone was formed. The shape of the new bone was the same as that of the coral, and there was no significant inflammatory reaction. Part of the coral in the composite was absorbed into the host. The combination of coral skeletons impregnated with type 1 collagen is more effective in forming autografts with designed shapes than current calcium hydroxyapatite sponges used in maxillofacial reconstruction. Additionally, coral skeletons are less expensive than currently available hydroxyapatite bone implants. [3, 4]. 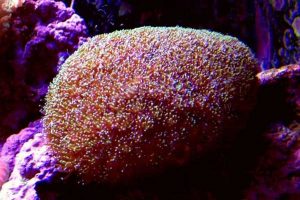 Galaxea: A protein complex called S2 has been isolated from the mucus of G. fascicularis. The S2 complex contains potent anti-topoisomerase activity, causing cytotoxicity to multiple-drug resistant cancer cells. S2 inhibits DNA relaxation catalyzed by topoisomerase I and II. Additionally S2 stabilizes the topoisomerase I-DNA cleavable complex, thereby inhibiting the DNA replication machinery, leading to cell death. The natural application of this complex in Galaxea is most likely to prevent bacterial colonization on the mucus. S2 has potentials of being developed into a new anticancer therapeutic [5].

It is understood that soft corals produce many toxic agents, these agents allow these sessile invertebrates to effectively compete for space, but I bet you didn’t know how useful these toxic molecules can be medically. 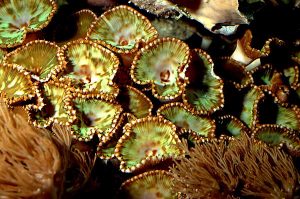 Gorgonians: Pseudopterogorgia elisabethae. Biochemical screening of natural products derived from the sea whip have been shown to have anti- tuberculosis activity. Scientists have identified two diterpine alkaloids which when biologically screened against mycobacterium tuberculosis have shown to posses potent growth inhibitors. These alkaloids are currently being synthesized and will go into phase one clinical testing. [6].

Encrusting Gorgonians Erythropodium caribaeorum. Eleutherobin is a novel natural product isolated from a marine encrusting gorgonian Erythropodium caribaeorum that is extremely potent for inducing tubulin polymerization in vitro and is cytotoxic for cancer cells with an IC50 similar to that of taxol. Taxol is currently one of the most effective FDA approved anticancer agents available for treatment in ovarian, breast, and non-small-cell lung carcinomas. Originally isolated from the bark of the Pacific yew, Taxus brevifolia, it was the first natural product described that stabilized microtubules. However, taxol has many pharmacokinetic limitations (such as multi-drug-resistance (MDR) susceptibility, and lack of aqueous solubility) which make it a less than ideal drug. Eleutherobin shares with taxol the ability to induce tubulin polymerization and is cytotoxic by virtue of this mechanism. However the mechanisms of tublin polyermization by eleutherobin are different than those of taxol induced polymerization. Additionally the drug is water-soluble and appears to overcome multi-drug cross-resistance, making eleutherobin one of the most promising new molecules with “taxol-like” activity [7]. 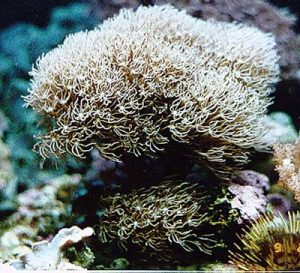 Zoanthids (button polyps): Zoanthids of the genus palythoa [See photo] posses an extremely potent toxin called palytoxin (PTX). PTX is a toxin that blocks cellular Na+/K+-ATPases. Sub-lethal doses of palytoxin have been injected repeatedly into mice bearing tumors, and PTX related effects on reducing tumor tissues have been examined. This toxin has been chemically conjugated to tumor-homing antibodies where the antibody provides a guided missile approach to delivering this lethal warhead. Palytoxin has been reported as the causative agent in mysterious fish death [8]. 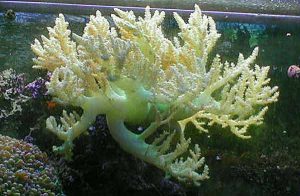 Xenia: a novel diterpene called Xenicane has been isolated from the soft coral Xenia elongata. Interestingly the terpenoid appears to be a fish specific poison, however it has shown some effectiveness at inhibiting mitrochonridia respiration in cancer cells [10,11].

Nephthea: The soft coral Nephthea was found to contain a bioactive compound called lemnabourside. Lemnabourside is a 5alpha-reductase inhibitor which posses the ability to inhibit the conversion of testosterone into the more potent dihydrotestosterone (DHT). The end result is that lemnabourside selectively triggers cell death (apoptosis) in cancer cells. Specifically, it is very active in prostate cancer cells, as they tend to be androgen dependent [12]. 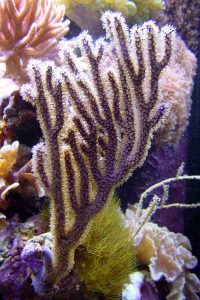 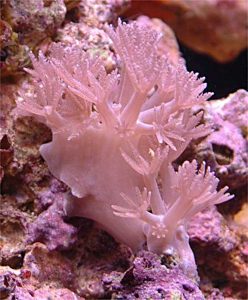 Alga: Two new drugs under investigation by Nereus Pharma are derived from the marine green algae Halimeda (_Halimeda Opuntia_). The drug Halimide [13, 14], a low molecular lectin-like molecule, appears to have hemagglutinating activity, and has shown early promise in treatment of early stage cancer, particularly breast cancers resistant to current chemotherapy. Additionally, in the algae Halimeda Dictostia, a sulfated polysaccharide exhibits a potent antiviral and anticoagulant activity has been identified. This compound known as HALOVIR A, a sulfated galactan has shown antiviral activity against herpes simplex virus. The inhibitory effect of the compound occurs during the adsorption period preventing viral entry into a cell [15]. 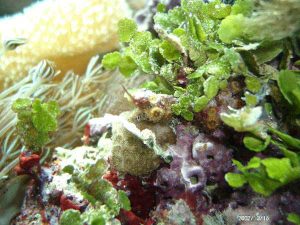 Scientists have found unique cyclic peptides known as kahalalides in a mollusk which feeds exclusively on the green alga, Bryopsis. In bioassays these kahalides (named A-F) have shown remarkable anti-tumor, antiviral, anti- malarial, and OI (activity against AIDS opportunistic infections) activities [16]. The structure of these peptides is cyclic depsipeptides, ranging from a C(31) tripeptide to a C(75) tridecapeptide and is responsible for their potent activities. Interestingly, data show that both Bryopsis sp. and mollusk (_Elysia rufescens_) are chemically protected against fish predators, as indicated by the deterrent properties of their extracts at naturally occurring concentrations [17]. This is the first report of a diet-derived depsipeptide used as a chemical defense in a sacoglossan.