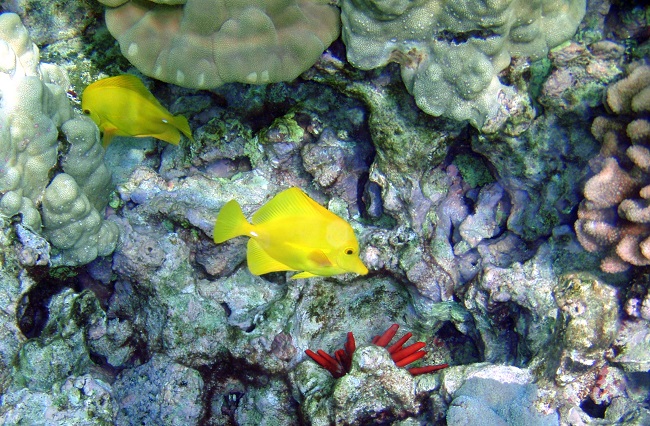 Fisheries researchers at the Oceanic Institute in Hawaii have been working—not so successfully—for years to develop culture techniques for the commercially and ecologically important yellow tang (Zebrasoma flavescens). In an attempt to step back a bit and work with a decidedly less difficult subject, they recently brought in clownfish broodstock. The idea, explains Research Scientist Chad Callan, Ph. D., is that they can in due course use information gained from success with the easily cultured clownfish to successfully culture yellow tangs.

The delicate marine ecosystems of Hawaii are increasingly under threat from overfishing as well as the indirect consequences of urban development. Marine conservation officials estimate that approximately 500,000 to 800,000 yellow tang are taken from Hawaiian waters each year. As this figure accounts only for reported cases, the actual total harvest may be considerably higher. The animal lives as long as 30 years in the wild; however, it takes many years to reach sexual maturity. Callan believes that having a sizable, ongoing aquaculture program for the species would contribute enormously to conservation efforts; not only would cultured yellow tangs help to meet demand in the ornamental fish trade, but they could also be used to restock depleted areas in the wild.

As anticipated, clownfish at the Oceanic Institute produced their first larvae earlier this spring. Marine Science students from Hawaii Pacific University are now helping to cultivate and raise the species. While some of the progeny will be used for further research, some may be donated to local aquariums and marine parks.

The step that Oceanic Institute scientists have taken back is a big one indeed; yellow tangs are not simply more tricky to culture, but exhibit markedly different spawning behaviors, parental strategies, and larval first feed preferences. Few things learned from clownfish culture (there is really not that much left to be learned here) will apply diametrically to yellow tang culture. As the issue of wild yellow tang collection remains a highly charged topic in the state of Hawaii and elsewhere, it can only be hoped that this much more gauged approach will result in the swifter realization of a truly practicable aquaculture industry for the yellow tang and similar species.