In December, I wrote a post about getting back into coral keeping after a long hiatus.  As I mentioned, the goal of this system was a small, but high energy system. Something to contrast the “less is more” concept that is growing in popularity. In other words, a “more is more” tank. But let’s be real here: I’m not interested in bucking trends, shifting paradigms, or controversial husbandry. The bottom line is that the system is high energy because of what I want to grow in it. All I care about is successfully growing the corals I like. And I wanted to model it after a place that was very very special to me.

A tiny island speck, known locally as Kasolo, in the Western Province of the Solomon Islands is inextricably entangled with American History. Locals now call this island Kennedy Island. A Patrol Torpedo Boat, PT109, under the command of John F. Kennedy, was cut in half by a Japanese destroyer in the Blackett Strait. The survivors swam to Kasolo.

After two nights on Kasolo, Kennedy went for a swim to find islands with a greater food supply and potential local contact. Upon return he led the rest of the survivors to the island that would be their oasis and savior: Olasana. Two native Coastwatchers salvaging fuel and supplies from a Japanese wreck in a canoe were spotted by Kennedy. These fearless natives, Biuku Gasa and Eroni Kumana, had Kennedy carve his location and a message on a coconut and proceeded to paddle their dugout canoe to the Allied base on another island, 35 miles away, through Japanese-patrolled waters.

Olasana holds a special place in my heart not only for its historical significance: it is also the field site of my research. The island lies in the heart of the West Pacific Warm Pool, a global heat engine and moisture source, and a major controlling factor in global climate. I work with samples of the slow growing coral species Diploastrea heliopora from around Olasana, utilizing the chemistry of their skeletons to determine how climate has changed in this important region. It is currently uninhabited with a pristine reef and several small lagoons filled with Porites and shallow type, digitate and tabling Acropora spp.

So, I wanted to be able to be reminded of this place every time I sat and relaxed at my tank. I talked a little bit about the early stages of the tank in my old post, but I wanted to detail how it has fleshed out.  As far as the system itself goes, the aquarium is a standard 20 gallon long. Lighting consists of a single 400 watt horizontal Iwasaki Bulb, circulation is achieved by a single vortech mp10. I modified a Fluval U2 filter by removing the fine filters. On one side of the U2 I left the course sponge in for things like dust and other large particles, in the other side I put a bag of activated carbon. I heat the system with a 100 watt heater. I use an auto top off float switch that controls a small powerhead in a reservoir of saturated solution of RO/DI and kalkwasser. Fractionation is accomplished by a simple open-bottomed air driven skimmer I built out of PVC. The system is controlled and monitored by a Neptune Aquacontroller apex Lite. Having a marine chemistry background I am very fond of being able to monitor my pH at any point in time. I diligently perform 5-10 gallon water changes on a weekly basis (I just use plain old Instant Ocean with some extremely pure RO/DI water). 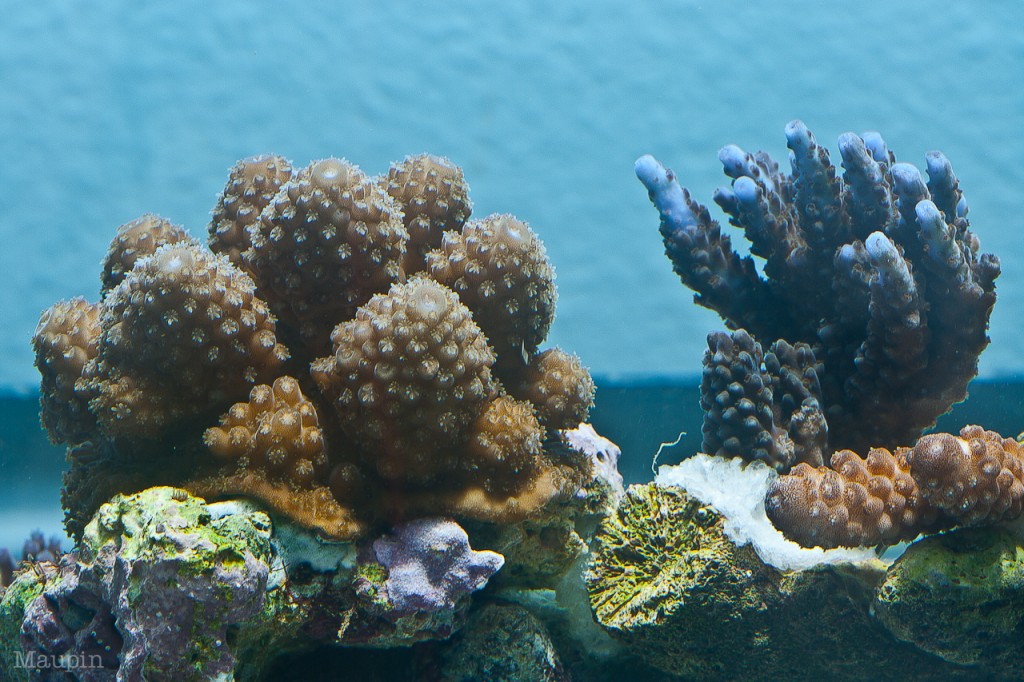 The tank has almost no live rock for the sake of live rock. This raised some eyebrows, but the idea is not new, as I mentioned in my previous blog post. The incredible generosity and helpfulness of good friends helped me stock the tank with the types of corals I was after. I am forever indebted to Rich Ross, Matt Wandell, Kevin Kohen, Gresham Hendee and Sanjay Joshi for helping me find and try to grow the corals I was looking for, and I can’t think of a more public way to say thank you than this blog post. I hope I can do their generosity justice by doing the best I can in the health of this system.