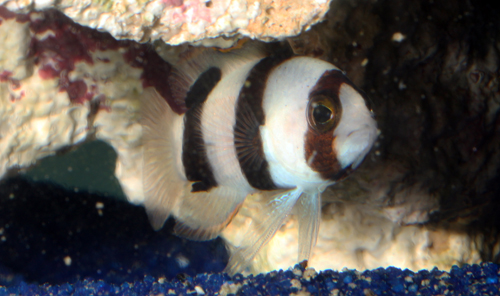 Country Critter’s pet shop in Patchogue, NY has landed a specimen of the rare, deepwater basslet Lipogramma evides. This small reef fish from the tropical Atlantic and Caribbean is normally found at depths of 145-365m (480-1200ft)! Collecting fishes at these depths requires the use of mixed gas diving or submersibles and a decompression period of several days, which accounts for their rarity in the trade as well as their impressive price tag. Although we’ve seen this fish on reefbuilders in recent months when it showed up at a Japanese dealer, it’s likely that this banded basslet is currently the only one in the United States.

At first glance, L. evides may just appear to be a black and white banded fish with a rather mundane body shape, but it’s the subtle beauty of its iridescent highlights and its exceptionally long, tapered pelvic fins that make this basslet so appealing…well, that and the fact than none of your friends have one. 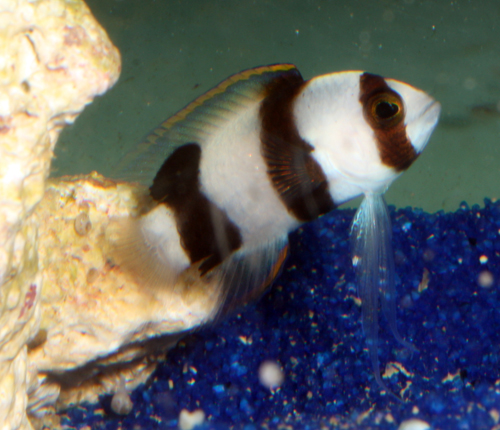 This L. evides was obtained through Forrest Young at Dynasty Marine in Marathon Florida and was originally collected at a deep-water collecting station in Curacao. I asked shop owner, Jonathan Hale how much he thought he would get for this fish.  He said it’s for sale for $2000, but that he’s happy to just keep on display at Country Critter’s so that crazed fish collectors can stop by to get a look at it. Naturally, I also told him that if he gets another one, we should collaborate on a breeding project.  He was very receptive to the idea. 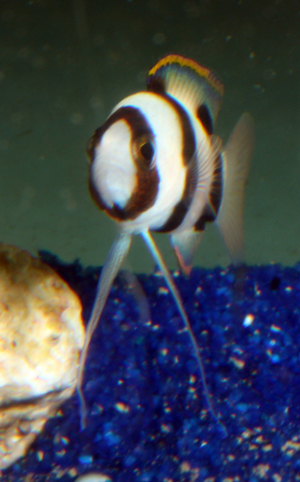 I would like to point out that, in a generous display of their commitment to the future and sustainability of our hobby, Forrest Young and Jonathan Hale donated all of the Liopropoma carmabi that currently make up the broodstock for my Liopropoma breeding project at the Long Island Aquarium. Stay tuned to reefs.com for more updates on aquaculture of bass, basslets and other marine fishes.