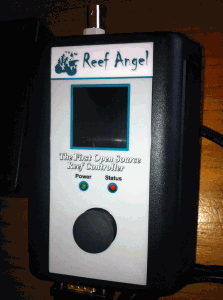 As some of you may or may not know, I am not only an aquarium controller addict, I am also probably one of the most vocal advocates out there for making this a standard piece of equipment on just about every reef tank. I say this not because they are great gadgets, but because of the fault tolerance as well as peace of mind they can offer — preventing common disasters such as heater failures, tank leaks/overflows, etc. 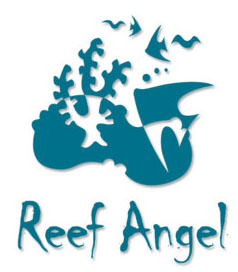 Over the last year or so I have been watching the rise in popularity of the ReefAngel Reef Controller. Not only does it promise to deliver a platform with a wider set of potential options and features than others on the market, it was also about 10-20% cheaper than the competitors when simply looking at a features list. So, needless to say I was very excited when offered the chance to review a working unit.

Over the course of three days I have spent about three hours evaluating this product. In that time I realized a fundamental aspect of this controller. So, to begin, I would like to use an analogy to help you understand how I see the ReefAngel fitting into the current aquarium controller market and to quickly allow you to know if this controller is right for you. 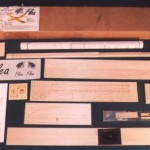 Huh? I know what you are thinking but stay with me for a moment. One of my other hobbies I have enjoyed in the past is RC Airplanes. If you get into this hobby you will immediately see there are two approaches. One is the tried and true old-fashioned way where you pick out an airplane, an engine, a radio, glue, etc. and it all arrives at your door. You excitedly bring it in, open the box with the pretty picture of an airplane on the outside and then your heart sinks…wait, this is a box of sticks and balsa wood. Your buddy on the other-hand went and bought this thing called an ATF 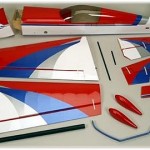 airplane. ATF stands for almost-ready-to-fly. His arrives, he opens the box, and there is a wing, a fuselage, a rear stabilizer, a rudder, etc. all ready to go in a beautiful red, white, and blue covering. All he has to do is assemble the main components and go out to the field. Now, there are of course advantages and disadvantages to both methods. Clearly your buddy will be flying before you are – sometimes weeks or months. And, he will be able to do all the basic things with his airplane. However, his will be the same color pattern as everyone else’s, he cannot easily modify his elevator or ailerons for more responsive flight, etc.  Of course, you also have a whole group of people in your flying club or online to help you through the process…but a process it will still be. 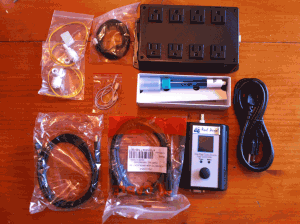 This is the perfect analogy to the ReefAngel controller. When you get your ReefAngel you will see that the components are basically the same as any other controller. There is a “brain”, a power-strip, some probes, and some cables to tie it all together.  The big difference though is that out of the box the ReefAngel is basically like that box of sticks and balsa I described above. It can become anything you like, but you are going to have to become somewhat of a programmer/tinkerer to bring it all to life. The experience is kind of like my first computer in 1985 – a clone PC. To get it to do anything I had to first build it, then I had to configure all the drivers, then I had know DOS, install programs, etc. before I could even write one document. On the other hand, my buddy at school bought the first Macintosh. He plugged it in.

I guess what I am saying in all this verbiage is this: If you like to tinker, program computers, build web sites, solder stuff together, etc. then this is the product for you.  You will most likely love it! However, if you are not technically adept, stay away from this product or you will likely end up hating aquarium controllers. If  you want your experience with a controller to be plug and play, buy something else.

Now, on to the review itself. 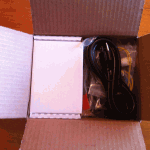 I received the product directly from ReefAngel. Upon opening the box everything was packed neatly and safely.

The first thing I noticed is that one of the cables was labeled VGA cable. Hmmm…I thought, I guess this can plug into a monitor somehow. Later I found out that no, that is the interconnect between the “brain”, and the outlet module.

Another nice thing I saw about the ReefAngel is that it comes with two float switches. With these you can do you own ATO with the controller or use them for alerts, etc. It also came with separate connector cables for them that you are supposed to splice in some extra wire to. Again, this is something above the average reefkeepers head but perfectly fine for the DIYer.

The ReefAngel stands out in comparison to other controllers in that standard on the unit are three separate temperature channels for your temp probes. They only include one probe, but you could purchase more and then monitor your canopy temp or LED heat sink control things like the fans or turn off the LED if an overheat should occur.

The ReefAngel comes standard with two dimming channels for LED. I would have preferred four as most people are now using at least three colors in their DIY LED set ups nowadays. 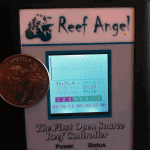 The user interface is one of the biggest disappointments I had in the hardware itself.  First off, the display is small…scratch that…TINY…as in break out your magnifier tiny. For comparison I would say it is about as big as the display on an iPod Nano. It is full color, but the text on this screen is probably 2-3mm high…at best. Also, the user input is via a Xbox-like joystick for navigating the menus and their “Enter” is depressing the stick. The stick felt very cheap and plasticky and mine actually would not easily spring back from the up direction. I would have liked to see more discrete user input buttons. 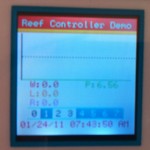 Once I connected it all together I turned it on. The ReefAngel comes pre-loaded with a “Demo” loaded on it. The word demo threw me for a loop at first as I thought this was maybe some in-store type demo you often see on TVs and such. However, after speaking to the developer of the ReefAngel, he told me that this was actually a “very complicated” piece of code that no one should really look at. OK I thought, what should I do next then. I explored the “Demo” application on the unit and found it to be quite lacking in features. For instance, there is no heater control built into it. In other words, out of the box I could not plug in the ReefAngel, turn it on, and have it control the temperature of my tank using the temperature probe for data and controlling an outlet based on that data and my set points. For even that simple action, it was time to build my own app.

So, I continued through the manual, followed the instructions for Mac, and was immediately lost. I spent an hour or so hunting down software, drivers, etc. The directions do not match up well with the menus and the example code was not where it was. I finally called the developer and found out that it really was not tested much with the Mac and really it is made for the PC right now. He also said that there will be an automated installer for the Mac coming down the road. I abandoned the Mac and switched to one of my PC notebooks.

So, on my PC I ran the installer, installed the software, initialized the system to prepare it to receive my own code, and examined the samples provided with the product. The manual told me to try out some samples. So I then loaded “Example1” as it was called. Sounded like a good start.

I bricked the controller. Or at least it seemed so to me. The menu came up, but as soon as I selected something, it then blanked it out.

It is at this point that I realized that continuing the review from this point would simply be more work than I wanted to invest. End result, three hours and still no controller up and running like I would expect.

This is the project kit of controllers. And, I do not mean that in a derogatory way. I am absolutely sure that based on the Arduino controller as well as the hardware provided that this is THE best controller out there for those that want to experiment and DIY.

To wrap this review up, I will refer to my article on the Top five things the extreme fish-geek wants in an aquarium controller to rate how well this controller hits the mark for that uber-technical market. This controller is programmable, has an open standard, variable outputs for light dimming, and an incredibly passionate and dedicated community. The only place it falls short is that it does not have a simple way to deal with power failures although it is quite possible that this has been dealt with by the community.

So, in conclusion, if you are a super technical DIYer this may very well be the controller for you. If you want plug and play, I would not recommend it.