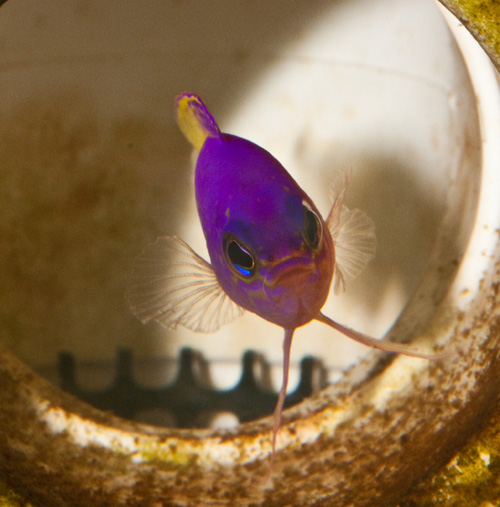 It’s been several months since I raised my first Lipogramma klayi at the Long Island Aquarium. Sadly, I’ve only had two more reach settlement since then.  One of the bottlenecks to the mass production of this beautiful deepwater basslet, as well as other grammatids, is that they are what we sometimes refer to as “trickle” spawners because although they spawn often, they lay only a few eggs at a time. Also, because they lay demersal eggs in nests that are maintained in small reef crevices, they cannot easily be removed for hatching. 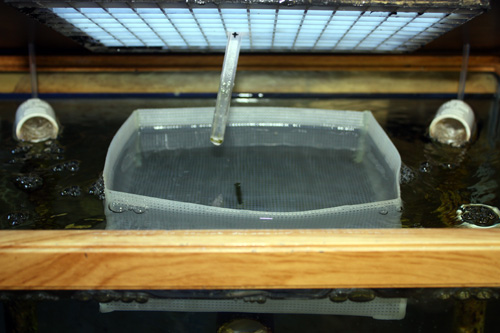 My original larval collector made from needlepoint screen

My initial rudimentary larval collector, based on something I used many years ago for blennies, consisted of a piece of needlepoint screen fashioned into a box that was held at the surface with a small light at the center.  The idea was that the positively phototactic larvae would swim through the screen and toward the light source, remaining in the box until I pipette them out in the morning.  Using my needlepoint box, I would get one or two larvae several times a week, with a maximum of five on one occasion.  I assumed I might be missing a few, but considering my limited space for rearing cool-water larvae, I didn’t give it much more thought….until I got a look at one of Chad Vossen’s larval collectors at the MBI workshop in August.  It was a beautiful combination of light attractant, airlift-driven suction, and mini kreisel, engineered for a small glass tank.  I noticed that he had donated some to the raffle so I bought a handful of tickets and put them all in that bucket.  Unfortunately, I didn’t win.

Ever since MBI, I had been thinking a lot about those catchers and wondering if they might produce a better yield of basslet larvae than my needlepoint boxes.  So, a few weeks ago, I contacted Chad to inquire about getting a couple of them.  He sells them for $40 each.  A few days later, my two larval catchers arrived and I immediately got one of them set up on my 24-gallon L. klayi broodstock tank.  I adjusted the air to a flow that I thought would be sufficient to draw the larvae into the intake and left them for the evening. In the morning I found a few dead larvae in the collector.  I realized that these larvae are probably too small and delicate for the flow rate I had set, so the next night, after rinsing the collector, I set it up again with a much lower air flow.  The following morning I came in to find 7 larvae swimming happily around in the kreisel portion of the larval collector and the morning after that, there were 10 – a new record! 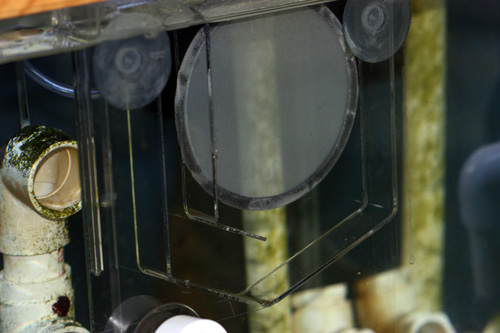 7-10 larvae collected in a night has become a regular occurrence following the peak of activity in their spawning cycle.  Chad’s larval collectors are not only giving me a much better idea of the spawning behavior of Lipogramma klayi, but they are providing me with a lot more larvae.  Does this mean that the market will soon be flooded with bicolor basslets and the price will come way down? Don’t count on it.  They are still very difficult to raise and they take at least 5 months to reach market size.  I can tell you that I’ll be placing another order for some of these larval snaggers very soon though. 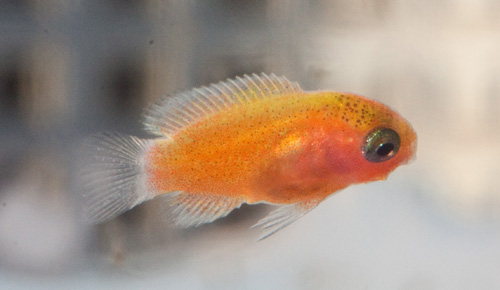