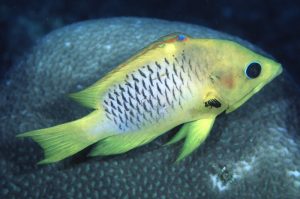 A slingjaw wrasse in the process of color change. It is changing from the common brown to less common yellow female coloration.

One thing that initially attracted me to the marine aquarium hobby was the diversity of fish species available. Not only are the reef’s piscine residents varied in form and color, they also exhibit diverse behavioral repertories. There are many coral reef fishes that are not that appealing to the eye but that do make great aquarium inhabitants because of their fascinating behavior. There are a number of wrasses (family Labridae) that fall into this category, including the members of the genus Epibulus. This genus contains one polychromatic form, known scientifically as Epibulus insidiator, and another species that has yet to be formally described. This later form is known commonly as the dwarf slingjaw wrasse. It has been reported from New Britain and Palau and, as the vernacular label implies, it attains a lesser size than its relative (it is said to reach a size of around 10 inches).

Epibulus insidiator ranges from the Red Sea to the northwest Hawaiian and Tuamotus, north to southern Japan and south to New Caledonia. It is usually found on reef faces, fore reef slopes and around lagoon fringing and patch reefs. It is most often found in areas with rich stony coral growth. The slingjaw wrasse is found at depths ranging from less than one to 137 feet. It attains a maximum length of 14 inches. 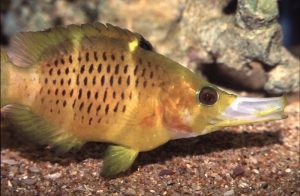 The slingjaw wrasse gets its name from the highly protrusible jaws, which are used to pluck prey from reef interstices and from between coral branches.

The slingjaw wrasse displays striking sexual dichromatism. Subadults and some females are brown, while other females are bright yellow. Males are dark brown, with green edges on the scales, a yellow bar on the side and a gray head with a black streak behind the eye. Brown individuals are typically the most commonly encountered form, followed by the terminal phase males. The yellow females are least common. Epibulus insidiator is a protogynous hermaphrodite (i.e., changes from female to male) and transforming individuals that display a combination of female and male characteristics are occasionally encountered. Terminal phase males are not only different in color from initial phase individuals, they are also considerably larger.

Juveniles are very similar in appearance, and behavior, to the possum wrasses ( Wetmorella spp.). They are greenish-brown with white lines on the head and body and a black spot on both the dorsal and anal fins. They are also very secretive, spending most of their time among coral branches or in crevices. Brown subadult and small adult slingjaw wrasse (between two to four inches) have been observed to disperse from one reef to another in a very unusual way. This behavior has been dubbed drift emigration. When the tide begins to go out, the slingjaws swim to the surface, either singly or in groups of up to four individuals, and join floating plant debris. The plant material can include tree leaves, ferns and sea grass. The slingjaw wrasse curls its tail towards its body and folds its fins up and begins to float along with the debris. The slingjaws have even been observed to adopt the coloration of the plant material. For example, if the leaves were yellow the fish would change to a yellowish hue overall. It has been suggested that these fish may not only benefit from being able to safely move from one area to another, but this behavior may enable them to prey on small, illusive fishes that often associate with floating debris. 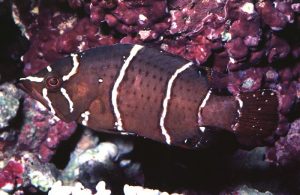 The slingjaw wrasse gets its name from its highly protrusible jaws, which can extend out to over half the fish’s total body length. Unlike most other bony fishes, the lower jaw is not firmly attached to the skull. As a result, the slingjaw wrasse can project the upper and lower jaws simultaneously. This anatomical anomaly is employed to snatch shrimps, crabs and small fish out of narrow crevices and from between coral branches. In Fiji I followed a male slingjaw that was searching for prey on a bottom composed of coral rubble and large slabs of coral rock. The slingjaw would swim-up to a coral slab and turn on its side to look underneath it. When it saw a prey item it would shot its jaws into the narrow space. It would then swim-up into the water column and spit out the inedibles, like sand and small pieces of rubble. It would then chew-up its prey with it pharyngeal teeth, descend to the bottom and resume the hunt. I suspect that it would rise well above the substrate to sort what it has ingested, so that if it accidentally spat out a prey item it would have a chance to recapture it before it could return to the bottom and hide. This particular individual was followed by an adolescent lyretail grouper ( Variola louti ). The grouper was taking advantage of potential feeding opportunities that might arise as a result of the slingjaw’s hunting. For example, if a prey organisms were flushed from under the coral rocks by the slingjaw’s projecting jaws, the grouper would pounce on it. It is not uncommon to see a slingjaw slowly extend its jaws in an exaggerated yawn. I have seen them partially extend their jaws at a conspecific, causing the approaching fish to give the other a wide berth. 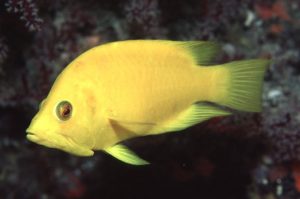 The yellow female color form of the slingjaw wrasse – the color form most highly sought after by aquarists.

The slingjaw wrasse will also associate with other fish in order to gain access to hidden or illusive prey. For example, in the Red Sea this wrasse will swim within schools of feeding purple tangs ( Zebrasoma xanthurum ). When the tangs descend to feed the slingjaw is in attendance to snap-up any small fish or crustaceans that is disturbed by the feeding herbivores. On occasion it may even “take-out” territory holding damselfishes that rush out to confront the approaching school! The form and coloration of the brown color phase of E. insidiator are similar to that of the herbivorous dusky surgeonfish ( Acanthurus nigricans ), while the yellow form resembles the zooplankton feeding golden damsel ( Amblyglyphidodon aureus ). Their resemblance to these non-predatory fish may enable them to approach closer to their prey in areas where they co-occur with these species. Slingjaw wrasse will also engage in cooperative, or joint, hunting. For example, I watched a slingjaw and a yellow trumpetfish ( Aulostomus chinensis ) hunting together in the Maldives. The trumpetfish swam over the wrasses until they reached a large table coral, at which time the slingjaw turned on its side and began to investigate the area under the coral platform, while the trumpetfish assumed a vertical orientation above the table coral and appeared to be waiting for flushed prey items. After 20 seconds or so, the slingjaw came out form under the coral, the trumpetfish assumed its position along the slingjaw’s back and they moved on to the next coral colony. Another favorite slingjaw hunting partner is the yellowsaddle goatfish ( Parupeneus cyclostomus ). These two fish are often seen swimming above the reef together, with the goatfish swimming beneath the wrasse, and searching for prey in a cooperative fashion. 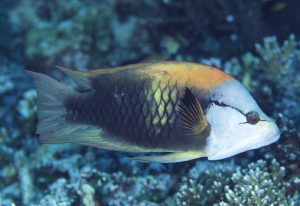 The male slingjaw wrasse. Aquarists be aware that this fish needs lots of swimming space and will make short work of crustaceans and small fishes.

The slingjaw wrasse makes a very interesting aquarium resident. It is an efficient predator that will snap-up glass shrimp and feeder fish with incredible speed. One potential problem with keeping this fish with other species is that they are so quick that they may prevent more sluggish predators from getting enough to eat. Although they can be switched to frozen preparations or fresh or frozen sea food, including fresh or frozen table shrimp and strips of squid or clam, they prefer live food. They love live fish, shrimp and will even eat live insects (e.g., feeder crickets) floating on the waters surface, as well as black worms and earthworms. Of course, feeder goldfish should not be a staple diet for this fish, or any marine species. If you feed ghost shrimp, you should “gut-load” them with a nutritious frozen or flake food.

The slingjaw wrasse needs a large aquarium (i.e., 135 or larger) as an adult and should be provided with plenty of large refuge sites to hide in if threatened. In nature it is shy species that is typically difficult to approach. They are also a reclusive and nervous when first introduced to the aquarium, although this will change once they learn to recognize the aquarist as a provider rather than a potential threat. When this occurs the fish will not only rise to the surface of the tank when its keeper approaches, it will also take food from the aquarists’ fingers! Juveniles will acclimate quickly to captive life if they are kept in a tank with plenty of hiding places, which does not contain aggressive fish. They will spend most of their time slinking from crevice to crevice, but they will also swim in open areas if the tank is in a low traffic area. Smaller individuals do great in reef aquariums, but as they mature, they are a threat to shrimp and smaller fish. Beware that these fish are capable of jumping out of open aquariums. This is most likely to occur if they are harassed by tankmates.

This is a solitary species and only one specimen should be kept per aquarium. Although it is not usually aggressive toward other fish species in the aquarium, I have seen them chase heterospecifics in the wild. For example, I observed an adult male persistently chase a snapper, which was just hanging in the water column minding its own business. Unfortunately, bright yellow females often turn brown in aquarium confines; this may be due to a lack of social interaction with conspecifics. One interesting behavior terminal males of this species sometimes display is to swim over the reef with their anal fin extended like a rudder.