Nudibranchs of the genus Phestilla are somewhat akin to the late American comedian Rodney Dangerfield – They can’t get no respect. Nor should they get any if you enjoy keeping corals in captivity. While Montipora-eating nudibranchs are well-recognized, and Acropora-eating flatworms send waves of fear and loathing among dedicated SPS keepers, the coral-eating nudibranch genus Phestilla gets little attention, although its presence in a reef aquarium can prove detrimental or deadly to a number of coral species. They are voracious feeders and a single adult can strip away as much as 10 square inches (25 square centimeters) of coral tissue in one day. Even worse, they are generally nocturnal, spending their days hidden from view only to emerge at night to begin their destruction. Searching the aquarium at night with a flashlight can be a lesson in frustration since these nudibranchs are well-camouflaged and blend in well with the tissues of its prey (See Figure Two below for an excellent example). Scant evidence of their existence is apparent at first, with perhaps poor coral polyp expansion, slight discoloration, and a bare spot here and there being the initial clues. Unless immediate action is taken, the affected corals have only a few days at most to live. 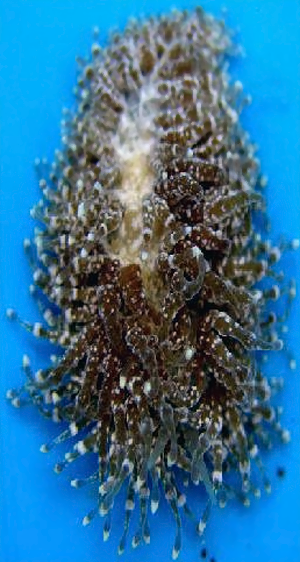 Figure One. Innocuous in appearance, the parasitic nudibranch Phestilla is swift and certain death to some corals. Probably Phestilla sibogae or P. lugubris. Photo by the author.

Phestilla nudibranchs have a wide geographical distribution, and have been reported from waters of Australia, Indonesia, Guam, Hawaii, the Philippines, Pacific Panama, Iran, Egypt, Thailand, Palau, Kenya, Tanzania, and India. Since one of Phestilla‘s coral hosts (‘Sun Corals’ – Tubastrea spp.) are now considered an invasive species in the Atlantic, one has to wonder if Phestilla is there as well.

Those researchers – taxonomists – concerning themselves with the classification of living organisms hold one of the most secure jobs – they are constantly sorting and re-sorting, leaving their practice, where order is the goal, in a constant state of disarray. To make this point, the exact identification of at least some coral hosts’ (especially finger and lobe stony corals –Porites) species status and their parasites (Phestilla) mentioned in this article are in debate among researchers.

Nudibranch taxonomy is not a research field heavily populated so descriptions of new species are sporadic, yet there is little doubt that many new species await discovery. These are some of the described species, or those with enough morphological differences to make researchers suspect they are species:

Some Goniopora species are difficult to keep in captivity. It has long been my view that inadequate feeding is the cause (I published this viewpoint in the mid-1990’s in Freshwater and Marine Aquarium magazine). Now we know parasitic nudibranchs could be a cause of these corals’ losses as well.

Faucci et al. (2007) report a possible case of host-switching, where Phestilla species jumped from their primary food source (Porites corals) to other corals (Goniopora and Tubastrea spp.). If this is indeed the case, the implication is frightening, and conjures the possibility of Phestilla nudibranchs finding alternative food sources when normal hosts are not available.

Haramaty (1991) found at least some zooxanthellae ingested by Phestilla sibogae remained intact, were not digested (or at least not immediately), and were able to photosynthesize at relatively low light levels (45 µmol·m²·sec, or about 2,250 lux). This leads to the interesting possibility that this species benefits by gaining translocated nutrition from the zooxanthellae. Pacific Porites corals generally contain zooxanthellae (specifically zooxanthellae Clade C15) possessing the remarkable ability to survive in conditions of low light. Thus even cryptic nudibranchs could gain nutritionally even when hidden from strong light during the day. 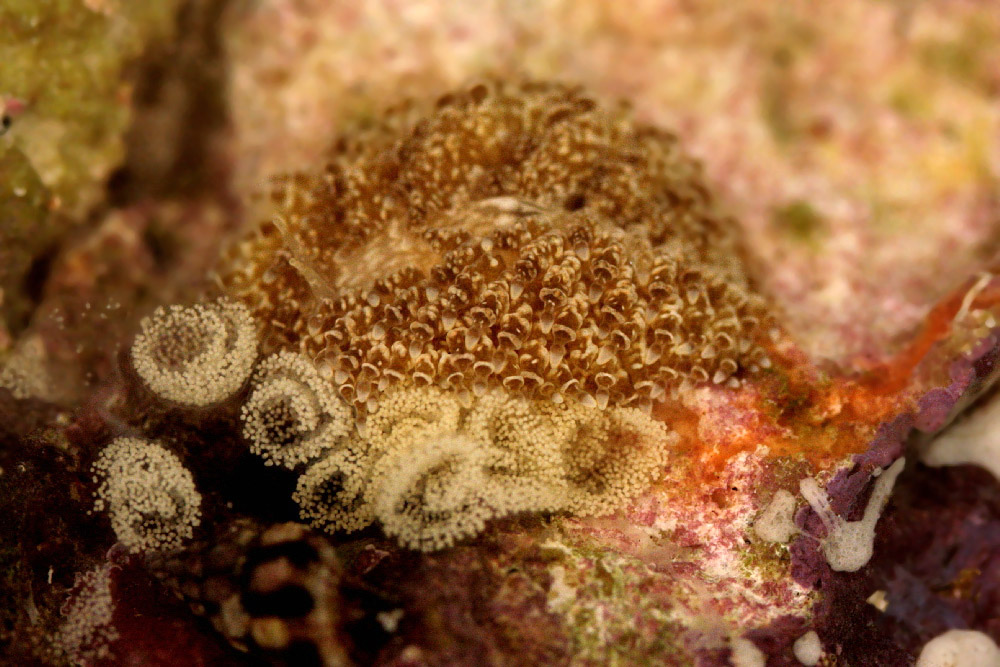 Figure Three. A Phestilla nudibranch with multiple spiral egg masses found of the underside of a Porites coral in Hawaii. Note the egg mass on the far left – most of the eggs within it have already hatched, leaving only a transparent ribbon. Photo by the author.

Many Phestilla species are prolific spawners after becoming sexually mature in only a few weeks after hatching. These animals are gonochoric (separate sexes) and females can lay several thousands of eggs every day until they are near the end of their short lifespans. Hence we can calculate a single female may lay as many as 320,000 eggs in about 2 months. It is thought that heavy predation of these nudibranchs by certain fishes, crabs and mantis shrimp has resulted in the reproductive strategy of ‘Reproduce quickly and abundantly – life is short!’ See Figure Three.

When I attended the 2011 MACNA conference in Des Moines, I was given a small sample of a product called ‘CoralRx One Shot’. The small tube held ~6 milliliters of a product said to act a ‘coral dip’, where the coral is placed for a few minutes in a container containing a mixture of aquarium water and CoralRx. This product reportedly kills parasites outright, or causes them to abandon their host. It is said to work on parasitic copepods and nudibranchs. Would it work on Phestilla nudibranchs?

My observations are not meant to be an in-depth analysis; however, I did wonder what effects this treatment would have on water quality. My first test broke a cardinal rule learned during HazMat First Responder training – I opened the container and smelled the contents. My best guess is that CoralRx is a natural terpene as it had a smell similar to pine oil, not unlike other coral dips on the market.

A quick visit to the company website (www.coralrx.com) provided mixing directions, as well as a link to a Product Review published in Advanced Aquarist: http://www.advancedaquarist.com/2009/4/aafeature2

This review recommends a dosage of 8 milliliters per gallon. I mixed 6 milliliters with one gallon of aquarium water. I checked the mixture’s pH with a calibrated meter, and found it did not differ from that of the aquarium’s water.

I had previously collected a Phestilla specimen (as luck would have it I could find only one) and placed it in a clean glass fingerbowl containing about 200 milliliters of water. During the night, the nudibranch laid two egg masses on the glass. This indicated two things – it was obviously a female and she was not near the end of its expected lifespan (Phestilla nudis are known to live for a few weeks after they stop laying eggs).

The fingerbowl was placed in the contents of the bucket holding the CoralRx solution and a little gentle mixing replaced the aquarium water with the coral dip mixture (I did not want to allow the nudibranch to be exposed to the air or be crushed by its own weight while out of water).

ThePhestilla showed rapid movement and squirming (subjectively interpreted as ‘displeasure’) after only a few seconds of exposure to CoralRx. After about 15 minutes, the CoralRx solution was again carefully replaced, this time with fresh aquarium water. The next morning the Phestilla was dead, and had disintegrated with only its cerata covering the bottom of the bowl. The egg masses appeared unharmed and remained intact until the contents were discarded 5 days later (no attempt was made to hatch the eggs). I made an assumption that the egg masses would have rapidly deteriorated (as the adult had) if they were killed by the treatment.

I also placed a small piece of live rock in the solution. The next morning, I removed a dead crab, but a small sea urchin did not seem to the affected. There was some unidentifiable debris (remains of sponges?) covering the bucket’s bottom.

This very limited observation suggests CoralRx may be effective against Phestilla nudibranchs, although the eggs are apparently not harmed. CoralRx seems to have effects on select invertebrates or life stages. Further experimentation is needed to confirm these results.

As a footnote, the manufacturer recommends CoralRx as a precautionary dip, and does not recommend it for whole tank treatment.

If quarantine and prophylactic measures fail and the evil genie is out of the bottle, natural methods to control Phestilla populations are possible.

Some may be surprised when seeing Chaetodon auriga included as it known to be a ‘coral-picker.’ The rationale for including it is as follows. First, corals targeted by Phestilla are doomed without predatory pressures to keep the nudibranch population under control (or better, eliminated). Second, some studies show at least some Chaetodon auriga specimens obtain only a small fraction of their nutritional needs from corals, in fact, they are one of the easier butterflyfishes to maintain in captivity and can be trained to eat a variety of prepared and frozen foods. If the fish proves troublesome, its removal is probably easier than removing the corals or tearing the tank down.

Predators of Phestilla show food size preferences. Thalassoma duperrey prefers larger nudibranchs, as does the crab Phymodius monticulosus. The Threadfin Butterflyfish eats large and small nudibranchs. There is little danger of fishes being harmed by Phestilla since these mollusks cannot concentrate nematocysts gathered from their coral hosts into their cerata, thus the nudibranchs do not sting.

One point should be clear: Predators of Phestilla nudibranchs cannot eat them if they are not within reach. A recurring tidbit of advice seems common within internet threads addressing issues with nudibranchs: ‘Blow’ the nudibranchs off corals by any means necessary including fanning them with your hand or using a baster. What does this tell us? An outbreak of predatory nudibranchs could be prevented or controlled by vigorous water motion. Water motion is always poor in aquaria when compared to that seen on real reefs.

This concludes our quick look at Phestilla nudibranchs. A listing of resources for those wishing to learn more is presented at the close of this article.

If you do not know the names of things, the knowledge of them is lost too.
— Carl Linnaeus, 1751

At last we have the real name for these nudibranchs which is fortunate – It gives me an excuse to refrain from calling them some of the rather nasty names I’ve heard them called. Perhaps we should give them a break as they are only doing what they do, fulfilling their role in the natural scheme of things. They are a ‘problem, because we have created an artificial environment where Embletonia can exist and thrive. The same points for control of Phestilla nudibranchs made above can apply to Embletonia: First and foremost, quarantine all new additions to an aquarium. If this proves unsuccessful, research and define natural predators and increase water motion.

Although discovery of the scientific name for Montipora-eating nudibranchs may seem trivial, it is not as it allows access to information found in peer-reviewed journals on the internet.

A quick internet search found this information. There are only two described Embletonia species:

If there is a bright side in finding Embletonia, it would be furthering our understanding of their life and reproductive cycles and describing their predators.

Questions? Comments? Leave a message below in the Comment section. For a quicker reply, contact me at RiddleLabs@aol.com.