As a kid my room was filled with aquarium containing turtles, salamanders, frogs, fish and just about anything else I could find. Since then I’ve rarely been without an aquarium of some kind, and set up my first reef in 1991. That was a 29 gallon Berlin system featuring some hilarious DIY equipment, but I eventually went on to a 65 where I accomplished some degree of success. I set up the current 120 in October of 2002, which makes it two and a half years old.

The aquarium is a glass Oceanic 120, 48x24x24 inches. The sump is located in my basement, both to reduce mechanical noises and to keep temperatures cooler in the summer. Other than one or two LPS specimens, all corals were grown from small frags. The sump a 75 gallon stock tank with a plexiglass cover. I try to keep systems as simple as possible, and the set-up features little automation. 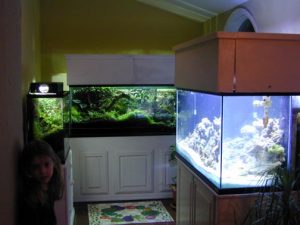 The return pump is a large Sequence and should have been able to provide a fair amount of the circulation. Unfortunately, a mix up with the retailer ended up with the tank having only one standard sized drain, rather than the two oversized drains I originally specified. So, the Sequence is dialed way back and I use various supplementary devices to get the polyps blowing. Currently, it’s one tunze Stream, one Mak 4 on a closed loop with a ¾ Sea-Swirl, one Seio, and one Mag7 powerhead.

I’m a proponent of heavy skimming, and believe many of the recommendations to feed corals have been overstated. In the past my reefs have been Adey-inspired naturalistic set-ups featuring such things as refugia, low-skimming, and macro-algae exports. I still see benefits there, but am leaning towards a more heavy reliance on skimming.

I’ve been through a few changes with the skimming, but right now I’m using a counter-current skimmer based on the ‘Snailman’ design. The air pump is a Whitewater LT15, hooked up to a 6″ fine-pore air diffuser from Aquatic EcoSystems. These airstones are very long-lasting, which makes the whole air-driven approach much more palatable. The skimmer body is only a four-inch pipe, and when I turned the air pump on for the first time it shot most of the water right out of the skimmer! I’m in the process of upgrading it to a 6 inch pvc pipe, but until then a ball valve is restricting the air flow.

Carbon is used on an irregular basis, usually placed in the overflow. Also the sump contains chaetomorpha, just a small amount at present. I’m not running any particulate filter at the moment, but I think it’s a good idea and I may add one in the future.

I’m a proponent of heavy skimming, and believe many of the recommendations to feed corals have been overstated.

Originally, the sump had about 5 inches of Southdown sand, and the display tank 2 to 3 inches. I was very skeptical of the current trend to remove sand beds at first, and it seemed that people were blaming every possible problem on them. Eventually however, I came around to that point of view. I figure at the very least that the low-flow sump had to be a settling area, so I siphoned the sand out over the course of a few weeks during water changes. I’ve siphoned some, but not all out of the display tank so far. The system is experiencing a slight increase in algal growth at the moment, probably due to the sand bed disturbances. The tank always has had minor algae issues, and I can’t help but wonder if that has anything to do with something I did when I first set the tank up. I purchased a pound of detritus from a live rock dealer’s curing tank and buried it in my sand bed. It was definitely full of critters, but probably was a phosphate bomb as well! 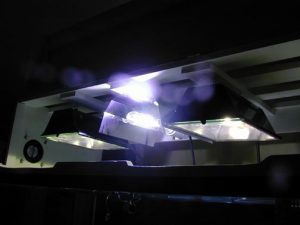 Two 250W DE 10K Ushio halides in Sunlight Supply fixtures. These are great fixtures and I’ve been very happy with them. I have a single 400W mogul Radium between the two to supply some blue to the scene. This works fine, but I probably would like to eventually replace it with actinic VHO or T5 flourescents, as I prefer that look.. The sump is illuminated opposite the display tank, with incandescent lighting. The canopy is DIY, and is ventilated with a 4″ fan, open back, and slat top.

My calcium tends to measure on the low side, but since I get good coral coral growth I don’t worry about it too much. It does seem though, that if the alkalinity is low for a while the growth appears to slow noticably. I’m using a MRC calcium reactor, dose kalk with a Liter-meter, and use 2-part additives occasionally. 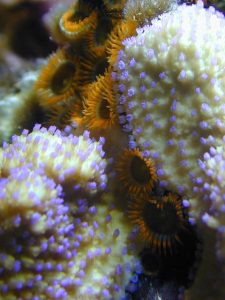 All came from frags, most traded or purchased online. Some of the more noteworthy ones are: 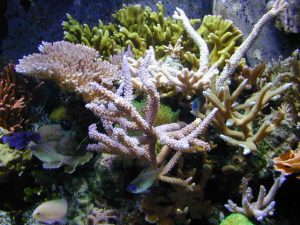 Half-black Mimic Tang – Acanthurus pyroferus – This less commonly seen version mimics the Pearlscale or Half-black Angelfish Centropyge vroliki. Mine is transitioning to adult coloration; having lost the “pearlescent” quality and developing the tail extensions with the orange trim. Great fish! 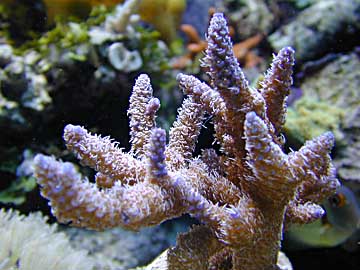 Comet – Calloplesiops altivelis – I think this is one of the most beautiful fish, but I wish it would come out a little more! It is so shy to come out for feeding, and so slow to eat that I don’t know how it gets enough. It seems to be doing well though. The one thing sure to draw it out is live grass shrimp, and its hunting behaviors are very cool. It will fan out its fins and arch its body, presumably to block escape routes for the prey. It seems to miss quite often, at least compared to our fuzzy dwarf lion, who never does.

Fathead (Sunburst) Anthias – Serranocirrhitus latus – The husbandry recommendations on this species usually says that it doesn’t like bright light; but mine happily stays out in the open in the brightest areas. Slightly aggressive with other planktivores, but does no damage. The one problem I have had with this fish is color fading. I have fed it food containing natural coloring agents, and food supplemented with Canthaxanthin, but it still doesn’t have it’s original brightness.

Black-capped Basslet – Gramma melacara – I could not feed the tank for a week and I’m sure this fellow would still be fat like a pig. I suspect he is responsible for the absence of bristleworms in the tank.

Threadfin Cardinal – Apogon leptacanthus – Nice schooling fish. One of them always had a mouthful of eggs every few weeks, but one of the three disappeared mysteriously recently and there have been no eggs since. 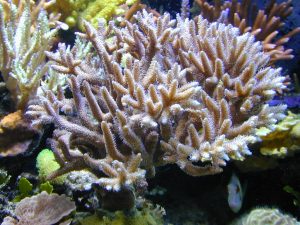 White-ray Shrimp Goby – Stonogobiops yasha – A beautiful fish, but this fellow insists on surfing my overflow to the basement sump. Having made three trips down there, I’ve decided he can stay! Probably better for a nano situation.

I have a variety of snail species, but feel that turbos do the best job. They are the only ones that can be counted on to eat hair as well as film algae. I also have a few emerald crabs, although I’m not sure how effective they are. I suspect they may be keeping the bubble algae in check. 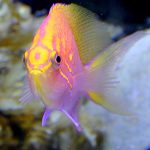 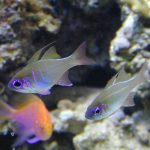 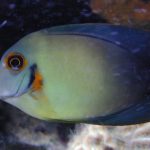 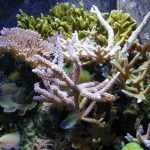 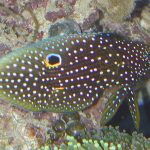 Things I would change, or do differently next time:

Bigger- I hope to upgrade to a larger tank, both to expand my fish choices and to give the corals a bigger space to grow out in. I have too many cramped colonies at the moment. 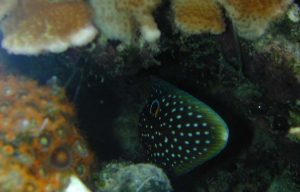 Here is the Comet, the way he usually shows himself. Possibly mimicking a morays head.

Circulation- I’m not sure if I will upgrade for this tank or wait, but I would like to do away with the numerous internal devices. I prefer the laminar flow created when all the powerheads are working together rather than turbulence. I would like a dual manifold driven by a motorized ball valve or similar device, in which all the outlets would direct flow clockwise for a short interval (just a couple of minutes) and then the valve would redirect flow counterclockwise for the same duration. I think this could simulate surge nicely and you would get a massive flow from all the devices working together.

Frag tank – I don’t like having all those frags falling all over the place, and would like a separate tank to grow them out in. 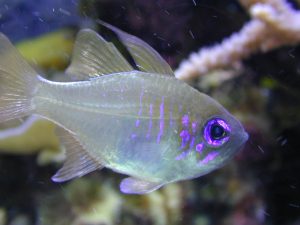 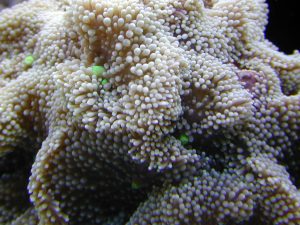 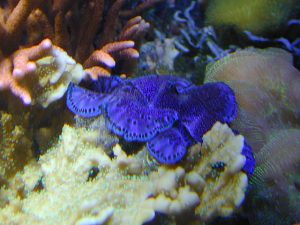 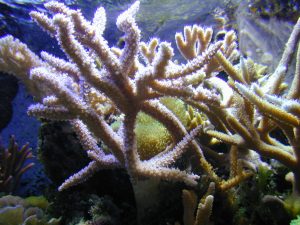 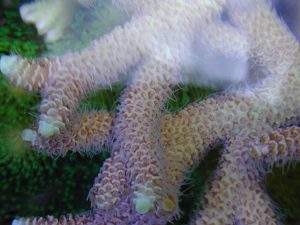 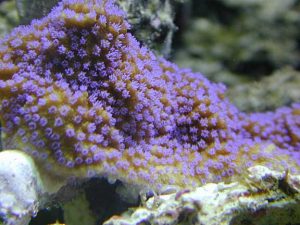 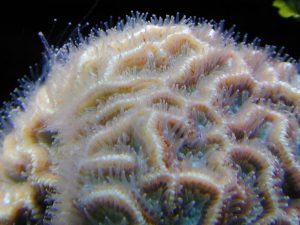 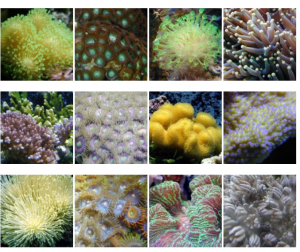