Freshwater Aquariums: Get to Know the Different Types of Aquatic Gardens 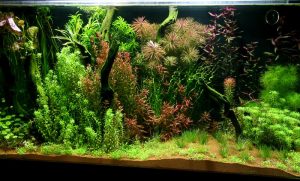 This large aquarium grows very tall plants but at the time the photograph was taken, this layout still needed more time to develop the foreground planting.

The freshwater planted aquarium scene is becoming more popular than ever and this burgeoning segment of the freshwater aquarium world is beginning to attract a lot of long time reefers. The old salts are looking for something new to do with all the old reef equipment laying around and the cost of entry into aquatic gardening is very low as compared to reefing. The increased popularity of aquatic gardening is partly due to many changes in the hobby which have close parallels with the strong growth in the reef hobby over the past ten years. There have been many advancements in our understanding of the requirements of aquatic plants and many new products have been developed and released to meet those needs. The sharing of information over the Internet is nothing new but the exchanges of new ideas and techniques are becoming increasingly sophisticated across language and distance barriers.

Fifteen years ago there was only one basic way to set up a planted tank (or a reef tank) but these days the different ways that it is possible to grow a planted tank are endless. For the substrate you can use sand, clay pellets, gravel or mineralized soil. The filter can be any number of options, as with the lights, and for carbon dioxide you may have to choose between ceramic diffusers, in-tank reactors, external reactors or even direct venturi injection of CO2 into the tank. Likewise, the types of plants that are used in an aquarium will greatly determine the type of equipment that is required and the type of planted aquarium that will be employed. Just as there are bulletin boards that have multiple subforums catering to the special interests of marine aquarists, so too do the freshwater aquarium bulletin boards have subforums catering to increasingly specialized freshwater planted aquarists.

This aquarium has a classic Dutch layout but with African cichlids and hardwater, this is definitely not the Dutch technique. Aquarium and Photo by Travis Simonson.

The Dutch planted aquarium is the equivalent of the Berlin reef method, both of which had their origins in Europe. In the beginning Dutch style aquariums were a particular way to keep a planted tank that included the use of Poor Man’s Dosing Drops (PMDD), substrate heating cables, laterite, CO2 injection, and high powered sodium vapor lights. Many of these features of the Dutch planted aquarium either became ubiquitous or obsolete and the name is more synonymous with using “Old School” plants and arranging an abundance of stem plants of very different types in separate but closely spaced bunches. The Dutch aquarium plant layout is basically an extension of the dutch terrestrial gardening philosophy of planting very uniform and neatly arranged rows of plants. Freshwater plants are not as rigid as terrestrial plants so the arrangement criteria is not strictly followed and the concept is a basic guideline. Although many aquarist may intentionally or unintentionally arrange their plants in this very orderly way, few aquarists will openly admit to being Dutch style aquatic gardeners. 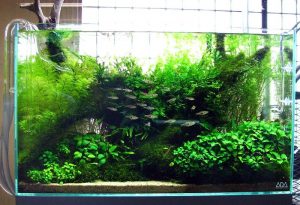 This Nature Aquarium at the Aqua Design Amano gallery is very much an old school example, photo by Daniel Chow.

The Nature Aquarium concept is a form of aquatic gardening that aims to use aquatic plants to recreate scenes of nature. The idea was almost singlehandedly developed by Takashi Amano, the undisputed godfather of nature aquarium layouts and aquascaping. Mr. Amano is one of the most influential persons in popularizing aquatic gardening to the world over through his series of wildly popular coffee table books, Nature Aquarium World and by sponsoring the one and only International Aquatic Plant Layout Competition. The nature aquarium concept is so popular that it already has several entrenched subcategories with their own emphasis. The Nature Aquarium will often use plants like hairgrass, riccia and Glossostigma to produce elaborate, densely vegetated foregrounds which may or may not also include a clearly delineated sandy area as a point of focus. One of the most important (if not the most important) element of the nature aquarium layout is the arrangement of the wood or stone hardscape. The appearance of a nature aquarium layout succeeds or fails based on the quality of the arrangement of the hardscape: too little of it and the aquarium may appear empty, too much and it is easy to make a scene which feels overpowered by rock or wood. 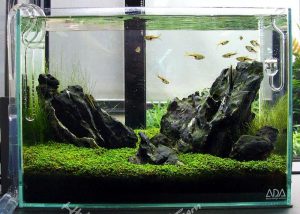 With so many aquarists around the world trying to emulate the tanks in Nature Aquarium World, it’s inevitable that multiple sub-styles would evolve from the original concept. The most widely recognized specialty of the nature aquarium layout is the iwagumi layout. Iwagumi is almost always characterized by the arrangement of just a few stones which are very lightly accented by low growing foreground plants, sometimes with just a tiny splash of midground plants to accent the rockscape. Another subclass of the nature aquarium is called wabikusa, Japanese for “subdued grass”. The wabi-kusa aquarium is almost a blend of flower arrangement and aquatic gardening wherein a shallow trimless aquarium is planted with a mass of aquatic and amphibious plants in one corner of the shallow pool, and the plants are mostly allowed to spread unfettered in every direction, including emerging from the aquarium.

A third sub-category of the Nature Aquarium is the Hong Kong style nature aquarium which for the last several years has really been the cutting edge of what a nature aquarium layout can look like. Masters such as Cliff Hui, Dave Chow and Daniel Chowhave been redefining the look of nature aquariums with very powerful scenes made entirely of aquatic plants, wood and stone. Many of the Hong Kong style aquariums incorporate the aesthetics of iwagumi and they use a range of gravel sizes that include pebbles and small stones as well as the dynamic use of wood, ferns and mosses. One of the most unique patterns in Hong Kong style aquascaping is the frequent use of very new plants to the planted aquarium hobby, many species which have growth patterns and appearances that are unfamiliar and unique. The Hong Kong aquarists are very fortunate to belong to the Creative Aquacapers Union, kind of like an elite super group of aquascapers who are at the forefront of reinventing the look of the nature aquarium and at least four of their members were among the top 100 layouts in this year’s international competition. 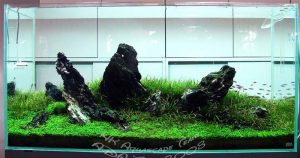 The iwagumi style can have relevance in the smallest, to the largest aquariums. Photographs by Daniel Chow.

The tonina style of aquarium keeping originated in South East Asia, particularly in Japan, Hong Kong and Taiwan where there was a surge in the popularity of keeping “Star Plants” or “Hoshikusa”, Japanese for “star-grass”. The term “Star plants” was originally used to refer to plants in the family Eriocaulaceae and the Tonina, Syngonanthus and Eriocaulon genera. All of these plants are strictly green in color with thin fleshy leaves that grow densely and radiate from a central stem and appear similar to a multi-pointed star when viewed from above. There are other plants with growth patterns that match this appearance and they also are good choice for use in Tonina Style planted aquaria.

In many ways, the Tonina Style aquarium is almost the SPS reef equivalent of the aquatic gardening world. Just as with corals, all plants can be maintained and grown under very minimal conditions but their true beauty only starts to show when they are kept under ideal conditions. Plants from the family Eriocaulaceae will only grow their best when kept in soft, acidic water with acidic substrate, and they will glow when kept under strong light and provided adequate water flow. Tonina Style plants have a very brilliant and noticeable appearance and they tend to stand out when kept with more typical aquarium plants. Because of this distracting appearance, Toninas and Erios are rarely used in nature aquarium layouts so that Tonina Style aquarists tend to arrange their star plants into a super dutch style layout with some elements of nature aquarium aquascaping but rarely with any hardscape. What is meant by “super dutch” is that the plants are grown in tight, neat clusters but there is is more effort spent in still trying to create more depth and some kind of thematic arrangement. 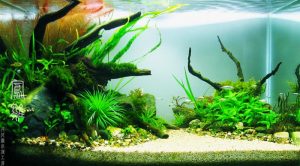 This piece is an avant-garde layout by Daniel Chow called “Phoenix”, it is one of the best small examples of the “Hong Kong” layout style.

This Tonina Style aquarium was designed and filmed by the author:

“Natural” planted aquariums are another type of plant keeping method which is also worth mentioning. Strangely enough, “Natural” planted tanks and “Nature Aquarium” could not be more different from each other. The natural style aquarium can refer both to the layout and how the tank is set up. Natural planted tanks basically refers to establishing a balanced aquarium with a moderate amount of light, moderate filtration, a DIY’d substrate made either from soil or simply allowed to accumulate mulm from fish poo. The natural method of keeping aquatic plants was the only way to keep live plants in aquarium for over a century but the idea was expounded upon by Diana Walstad in her book, Ecology of the Planted Aquarium. Much like Shimeck tried to do for reef ecology, Ms. Walstad made the case that plants need to take up X amount of nutrient, Fish food has Y amount of this and that and fish poo has Z amount of what plants need and somehow plants would get all the
nutrients they need from the soil and the excrement. Very few systems establish a truly balanced system but the elaborated ideas in the Ecology of the Planted Aquarium do help to establish some guidelines for building a cruise control planted aquarium which can grow a lot of the more forgiving plants. Natural Planted tanks tend to look like haphazardly arranged jungles of plants which can look quite appealing but with all the plants receiving a limited amount nutrients, the Natural Planted tank usually has smaller and less robust looking plants. This type of set up is ideal for beginners and casual hobbyists who want an easy to keep system which does end up being quite resistant to algae outbreaks. 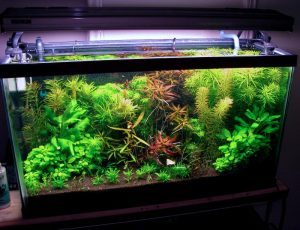 The “Natural” planted tank layout scheme works best if the jungle is kept form growing out of control.

A large planted tank following a nature aquarium layout at Aqua Forest Aquariums in San Francisco, CA. can be seen in this video:

If you have even a shred of reefkeeping skills, then trying your hand at a planted tank should be a walk in the park, especially if you have honed a penchant for observation and attention to detail: letting your plants telling you what they need to thrive is no different than looking at markers in your aquarium that indicate what kind of maintenance needs to be performed. One of the things that I am personally discovering about my rebirth into the world of aquatic plants is that there many skills of reefkeeping which are helping me to be a better aquatic gardener and likewise, there are many lessons that freshwater planted tanks can teach us as reefers. For one thing, I will never establish another reef without an even greater emphasis on the layout of the aquarium and with more attention to detail about the presentation of the entire aquarium. Huge thanks to Daniel Chow for the use of many of his fine photographs.