Lateral Lines: The Seen and Unseen World of Coral Fluorescence

“I really wish I could get my corals to fluoresce” 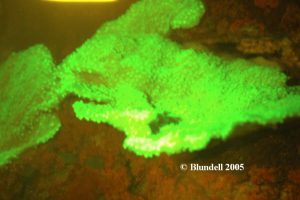 There is a statement I hear on a regular basis. However I think most people really mean to say “I wish I could see my corals fluorescing”. Many corals we keep in the aquarium hobby are capable of fluorescing. In fact many corals in your aquarium are fluorescing right now. In order to see this phenomenon, we must first understand how it works.

Fluorescence is a process whereby a matter of energy is absorbed by a substance, and then released by that substance with less energy. In this case a light source of high energy (lets say blue light) is absorbed by a substance (a coral) and then released with less energy (i.e. green light or red light). In general four pigments are observed in coral fluorescence (Mazel 1997). Dr. Charles Mazel the world authority in coral fluorescence simply states that “fluorescence is magic””. To the scientist, that just may be the case. 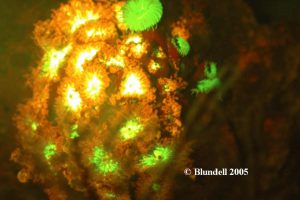 The purpose of this study was not to explain why some corals fluoresce, or how many, or how often. What we are exploring here is the process of fluorescence and showing examples of this amazing process. This is the first step in a series of projects comparing captive coral fluorescence with the fluorescent properties of natural coral reef systems. Natural coral reef systems contain corals and coral skeletons which fluoresce. These coral tend to have more fluorescent pigments closer to mainland and is also directly related to the amount of nutrients in the water (Scoffin et al, 1989).

In order to see fluorescence (with any item, not just marine life) it requires a few important items. First of all you need to have a high energy source to react with the substance. In this case a very high intensity blue light (actinic light) is shown. This high energy source is called the “exciter” which is the source for “excitation light”. The second item you need is a filtering system that blocks the excess light, allowing you to only see the fluorescent light. This filter is a “barrier filter” which allows you to see the “emission light” from the fluorescent substance. The third item you need is the actual fluorescent item. Here we are looking at corals, but all sorts of items in your house will fluoresce, including plastic toys, honey, refrigerator magnets, peanut butter, etc. Why any of these items fluoresce is truly a mystery.

Corals That Will Fluoresce

The following are but a few examples of corals that will fluoresce in the aquarium. 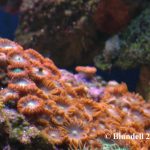 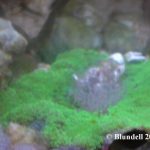 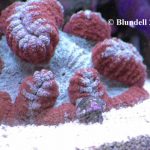 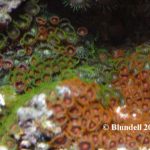 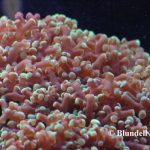 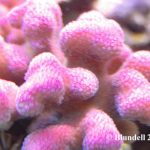 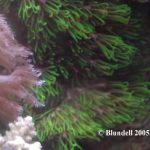 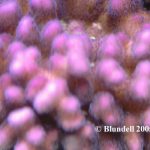 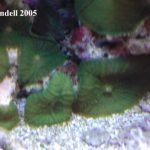 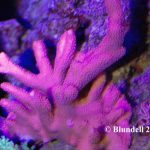 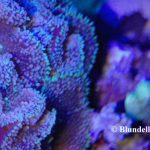 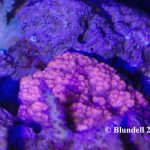 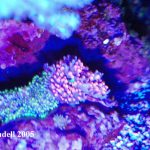 With the help of a filter system, we can remove the excess high energy light, and be left seeing (and thankfully photographing) the fluorescent light emitted from the corals. 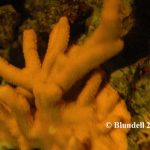 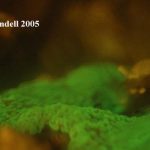 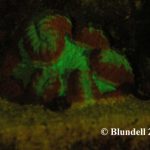 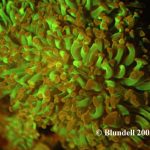 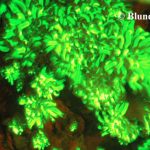 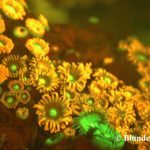 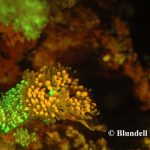 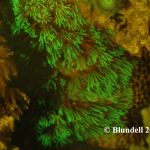 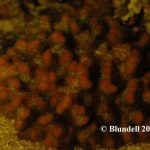 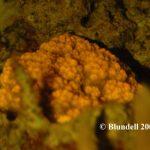 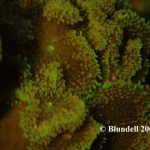 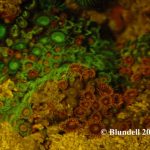 While very little is known regarding coral fluorescence, one thing is for sure, many corals will and do fluoresce. Whether fluorescing is related to coral health, spawning cycle, defensive ploys, or aggressive ploys, is completely unknown. From a hobbyist perspective the attractiveness of many corals is directly related to the coloration of the corals. For this example, corals can have their color greatly enhanced by fluorescent effects even if you don’t see it.

I would like to thank Dr. Charles Mazel for his incredible contributions to the fluorescent marine life field. His research and presentations are cutting edge, and bring new science directly to the hobbyists. This project is also indebted to the financial support of The Aquatic & Terrestrial Research Team, Shane Silcox, and a generous grant from PADI Project Aware. Project Aware has demonstrated a commitment to coral reef studies with their sponsorship of this venture. On a personal note the photographic experience and generous friendship of Shane Silcox proved to be instrumental in the completion of this project.