In Part 7, we examined some environmental factors that can affect coral non-fluorescent chromoproteins. Also presented was the concept of light reflectance and how corals generally fall into either ‘brown’ or ‘non-fluorescent blue’ coral modes (although it seems apparent that light intensity – particularly ‘blue’ light – can promote the transition from one state to the other). 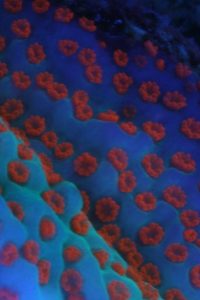 This time, we’ll look at those factors known to influence corals’ ‘blue’ and ‘green’ fluorescent pigments. For our purposes, we’ll say that blue and green fluorescent pigments are in the range of 400nm to 565nm. There are at least 66 described pigments in this category; in reality there are probably hundreds (see Part one of this series for a listing of fluorescent pigments www.advancedaquarist.com ). We will also observe how fluorescence can impact our perceived coloration of two coral specimens.

A review of terms is probably in order before we begin our discussion.

Fluorescence. Fluorescence is a phenomenon in which a material absorbs light of one color (wavelength) and emits it at a different color (wavelength). Absorption occurs when an incoming photon (light particle) causes an electron to move from a stable ground state to a higher energy, unstable excited state. One of the ways for the excited electron to return to the ground state is to ‘jump’ back down, emitting a photon of light. There is always some energy lost to heat in the process, so the emitted photon has less energy than the original photon. The energy of a photon is related to its wavelength, which we perceive as color – higher energy corresponds to shorter wavelengths, lower energy to longer wavelengths.

Fluorescence lifetime. Fluorescence is short lived – once the excitation wavelengths are absent, fluorescence decays in a fraction of a second (billionths of a second), and the phenomenon ends.

For practical purposes, any pigment that ‘glows’ under an excitation source (usually a ‘blue’ actinic lamp or high kelvin metal halide lamp) is considered fluorescent (Be aware that some non-fluorescent proteins may appear as a ‘flat’ blue or purple-blue when viewed under these light sources). Fluorescent pigments are generally readily apparent and identifying them is usually quite easy when using a fiber optic spectrometer – spikes not due to the spectral signature of the lamp are fluorescence!

Figure 1. The spectral signature of a common black light (Wal-Mart variety). Besides the ultraviolet spike at ~365nm, there are two ‘shoulders’ in the visible portion of the spectrum.

However, we must exercise care when analyzing these signatures and understand the spectral quality of the excitation light source.

A ‘backlight’ was used to excite all fluorescent pigments reported in this article. Figure 1 shows the spectral signature of the ‘common’ backlight where the output is largely in the ultraviolet range (and thus invisible to the human eye). Note that there are two broad bands of visible light at 400-408nm (violet) and 429-439nm (violet-blue). Therefore, we must be especially careful when analyzing fluorescent signatures and not mistake spikes in these two ranges as that of fluorescence – they could well be mere reflections of the excitation source.

While the generation of non-fluorescent chromoproteins seems, in many cases, to be linked to light intensity/quality, it may seem surprising that blue fluorescent corals are most abundant at deeper depths. They comprise about 42% of the total number of fluorescent coral colonies found at depths greater than 10m on the Great Barrier Reef (Salih, 2003 – see Figure 2).

PAM fluorometry (a ‘photosynthesis meter’) shows us that the Superman Montipora does not require a great deal of light and will in fact bleach when exposed to 300-400 µmol·m²·sec during a photoperiod of 11 hours (Riddle, in press).

Blue Fluorescence of the ‘Superman’ Montipora

Parts 1 through 6 examined the known pigments found in marine invertebrates. After scouring hundreds of references, I felt fairly confident that the planned spectrometry work would find coral pigments that had been previously described. I was in for a rude awakening. The very first fluorescence analysis revealed at least 3 pigments that, to my knowledge, had never been reported before in corals (see Figure 3 for the fluorescence of the ‘Superman’ Montipora).

Figure 3. Fluorescence of the Superman Montipora (seen in the introduction photo).

Green fluorescence is perhaps the most common of all coral fluorescent pigments (hundreds of corals contain one of more of the 45 or so described ‘green’ pigments). 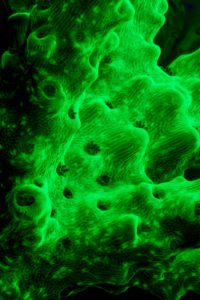 Figure 4. The green fluorescence of the ‘Bali Slimer’ Acropora.

Figure 5. There seems to be no real correlation between depth and corals displaying green fluorescence. 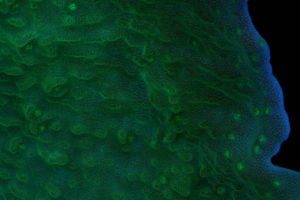 Figure 6. This Montipora’s green fluorescence is most apparent in the polyps.

Effects of Fluorescence on Perceived Color

Fluorescence can, in some cases, determine the apparent coloration of a coral. The example in Figure 7 demonstrates that a green fluorescent pigment can become the dominant pigment, thus ‘over-powering’ the coral’s reflectance (see Figure 6 for a photo of this Montipora).

The fluorescent pigment does not always determine the apparent color of a coral. For instance, Figure 8 is the reflectance of a ‘Purple Monster’ Acropora. The reflectance signature is clearly that of a ‘blue’ coral (see Part 7 of this series for an explanation of ‘brown’ and ‘blue’ coral, if necessary). There is a minor contribution of green fluorescence peaking at 515nm (apparently the same pigment seen in the Montipora in Figures 6 and 7). However, the green pigment fluorescence is not strong enough to make the coral appear green under full-spectrum lighting (it is, of course, purple).

Figure 8. ‘Purple Monster’ Acropora reflectance – it is a category ‘blue’ coral (due to the presence of at least one non-fluorescent chromoprotein) with minor contribution of broadband green fluorescence. When viewed under broadband light sources, the green fluorescence plays little part in our perception of this coral’s coloration.

This is a most interesting report – but is her observation applicable to reef aquaria? Evidence suggests it is – darker (zooxanthellae brown) corals can, under certain conditions, absorb heat and become warmer than the surrounding water. In general, reef aquarists are advised to keep water temperatures in the mid-to-high 70ºF range. When using metal halide or mercury vapor lamps, it is possible for coral skeletons to act as heat-sinks and actually become slightly warmer than the ambient water temperature. This rather disturbing news (especially for those corals maintained in aquaria teetering on the edge of acceptable upper-scale temperatures) is discussed by Riddle, 2006 (see www.advanceaquarist.com/2006/2/aafeature2 ).

Next time, we’ll look at orange and red coral fluorescence and how they are distributed by water depth, and examine if some pigments are really photoprotectants.

The Atlanta Reef Club will host the Marine Aquarium Conference of North America (MACNA) in September 2008. See www.masna.org for details.

Many thanks to Steve Ruddy (www.coralreefecosystems.com) for his assistance in gathering data.