Media Review: Important Advances in the Aquaculture of Marine Angelfish

This month’s column will focus on two very exciting announcements in the aquaculture of marine angelfish. These developments hold the promise of significantly reducing the negative impact of fish collection on wild populations of these beautiful fishes while providing a source of aquarium specimens for those who wish to keep them.

Both breeding programs were established in Hawaii, based on two groups of Hawaiian angelfish, organisms with special appeal to aquarists. The collection of fishes from the wild for the aquarium trade is a hot issue here in Hawaii, with much public opposition in the face of verified declines in the abundance of collected species. The state of Hawaii, especially the Kona coast of the Big Island (Hawaii) stands third as a world source of aquarium fishes, exceeded only by exports of live specimens from the Philippines and Singapore. 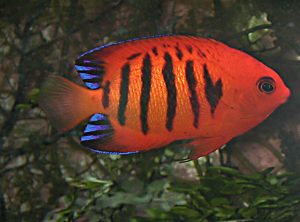 The flame angel (Centropyge loriculus) in these pictures is maintained by the author in his reef tank. This angelfish is very popular with marine aquarists, and it is the author’s hope that they will be successfully reared in captivity, limiting the impact of collecting wild specimens.

The impact of collection is clear. The December 2001 issue of The Smithsonian reports, in “Something’s Fishy,” that Brian Tissot, a Washington State University marine ecologist, found that in Hawaiian waters targeted by aquarium collectors, populations of eight of the most popular species had fallen by 38 to 57 percent. More than 400,000 reef fish are collected from Hawaii’s reefs annually for the aquarium trade. (Honolulu Advertiser, January 23, 2002)

William Walsh, marine biologist attached to Hawaii’s Division of Aquatic Resources states that, based on collectors’ reports, 52% of collected fishes here are yellow tangs, yielding an astonishing figure of 200,000 yellow tangs taken per year. To me, this leads to the clear inference that high mortality rates must exist at every level of the trade from collection through the end point in the tanks of consumer aquarists. The Smithsonian article quotes Hawaiian collector David Dart as saying that in good weather, an average diver can pull in 100 to 150 yellow tangs a day, and there are many collectors here. It is no surprise therefore, that the success of the breeding programs were seen as important enough to gain attention in the local press.

On January 20, 2002, West Hawaii Today in an article titled “Rare ornamental fish bred in captivity” (p.12A) reported that the Hawaiian masked angelfish, Genicanthus personatus, had been bred in captivity at the Waikiki Aquarium. The fish, a native of the Northwestern Hawaiian Islands, is one of the most rare and sought after aquarium specimens.

Bruce Carlson, the Aquarium’s director stated, “The success of this research expands the possibilities of including one of the rarest and most sought after species to the list of ornamental fishes commercially raised for world wide trade. We’re thrilled with this landmark achievement in the field of aquaculture.” Hobbyists pay as much as $5,000 for the angelfish. Aquaculture scientists have attempted for decades breed and to rear specimens of the more than 70 species of angelfishes.

It is important to note that the parental fish were all juvenile females when they were collected at Midway Island in 1993 and grew to maturity at the aquarium. Spawning began when one of the females changed sex and became a male, which is normal in the development of the species. 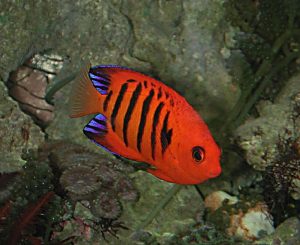 The flame angel (Centropyge loriculus) in these pictures is maintained by the author in his reef tank. This angelfish is very popular with marine aquarists, and it is the author’s hope that they will be successfully reared in captivity, limiting the impact of collecting wild specimens.

The larval masked angels were successfully brought through the 75 or more days to develop from hatching to metamorphosis, and the juveniles were reported to be one-half inch miniatures of their parents. The article states, “A breakthrough came when aquarium biologist Karen Brittain discovered a new, living food source to sustain the small larval angelfish.”

On January 23, 2002 the Star-Bulletin of Honolulu, in “Researchers hatch angelfish in captivity” and the Honolulu Advertiser in “Biologists score breakthrough in raising reef fish,” reported another major event in the development of the aquaculture of aquarium species. On January 17, 2002, the Oceanic Institute of Oahu had announced that research teams led by Dr. Charles Laidley and Dr. Robin Shields succeeded in obtaining natural spawns of the popular and beautiful flame angelfish, Centropyge loriculus, and in nurturing the larvae through metamorphosis at the hatchery, The initial group of juvenile flame angelfish is almost three months of age and will be joined by additional batches in 2002.

The Institute based its success on its research in food fish aquaculture. Dr. Anthony Ostrowski, Finfish Program Manager for the Oceanic Institute stated, “The key to this recent success was in culturing suitable microscopic organism (zooplankton) as prey for the angelfish larvae. Conventional diets are too large for such tiny larvae, therefore our researchers isolated plankton directly from the local reef environment.”

Recently, researchers at the facility also obtained the first recorded fertilized natural spawns of yellow tang, Zebrasoma flavescens, under aquaculture conditions and documented the early developmental stages of the larvae. They have not yet succeeded in rearing the larvae to the juvenile stage.

“The challenge now for our researchers is to convert these early achievements into reliable technology that will allow commercial cultivation of high-value species such as the flame angelfish and yellow tang,” said Ostrowski. “Such advances will bring new employment opportunities and lessen the impact the aquarium trade has on Hawai’i’s fragile coral reef ecosystem.”

The Honolulu Advertiser story included reports of successful aquaculture of another aquarium species, as reported by the Oceanic Institute. Frank Baensch, an independent researcher working in collaboration with Dr. Malia Chow at the Hawai’i Institute of Marine Biology, has developed techniques to culture another Hawaiian dwarf angel, Centropyge fisheri, Fisher’s angelfish, in captivity. The work was based on collaboration with respect to techniques. Some of the Fisher’s angelfish reared by Baensch will soon be on display at the Waikiki Aquarium.

In a related development associated with the attempt to mitigate the decline in target fish populations associated with collection for the aquarium trade, the Hawaii state legislature enacted bills three years ago to establish “Fish Replenishment Areas (FRA’s)” covering one third of the Kona coast of Hawaii, the state’s major collection region. The sites, which are monitored, include areas protected for a minimum of ten years that prohibit collecting, fishing, or both. Comparing target fish populations in the recently fully restricted areas with those closed only to aquarium collecting, and those open to all fishing, Kona marine biologist Walsh’s numbers are beginning to detect some positive trends. Three years into a five-year study, he has found that the yellow tang is no longer declining in the newly protected areas, but continues to decline in open areas.

In his surveys, Walsh also counts the baby recruits in protected and unprotected areas. The fact that he has yet to detect much of a difference worries him. “Without an increase in recruitment, the reserves won’t realize their full potential,” he says. I will have a full report on the recent data on the effectiveness of the FRA strategy in my next column.

As a final note, West Hawaii Today, on February 27, reported that Dr. Bruce Carlson, the current director of the Waikiki Aquarium, has announced that he will resign from the aquarium to become the Vice President for Life Sciences at the new Georgia aquarium, scheduled to open in 2005. Carlson pioneered public aquarium displays of living corals and the fascinating mollusc, Nautilus.