Last year, I wrote a two-part essay for this magazine (and spoke at several conferences) introducing the idea of growing corals from larvae. At the conclusion of my discussions I identified several experiments that needed to be performed in order to increase the success of culturing corals using this technique. During this past year, I stepped down from my soap box and retreated into my lab in an effort to put my words into action. After many unshaven, pretzels-for-lunch-and-dinner-days, I successfully completed two important experiments; one that will improve the techniques for growing corals from larvae, the other, a technique for increasing the growth rates of two different species cultured together in the same tank. The following is a report on the first experiment where I examined the effects of different foods on the growth of juvenile corals.

Corals in the Order Scleractinia are popular marine ornamental invertebrates within the aquarium trade (Delbeek 2001). In 2006, the Convention on International Trade of Endangered Species (CITES) reported that over 1 million pieces of live coral were traded globally. Although there are over 100 commercial facilities worldwide that grow and sell coral fragments, 99% of the coral fragments introduced into the aquarium trade still originate directly from tropical reefs (Wabnitz et al. 2003). Currently, all of the corals offered within the aquarium trade originate directly from the harvest of coral fragments from parent colonies on the reef. These fragments are obtained by cutting pieces of coral away from the main colony and attaching them to substrate. This practice may ultimately affect the parent colony as the exposed skeleton may promote the settlement of algae capable of overgrowing and smothering the colony (Nugues and Bak 2006). Further, the reduction in size could reduce the fecundity of the coral (Tanner 1997), and decrease its ability to contend in a highly competitive environment (Connolly and Muko 2003). 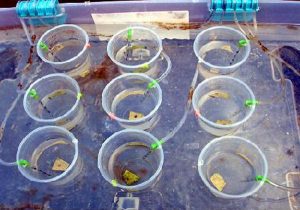 To reduce the number of corals harvested from reefs, I have developed techniques for growing corals from larvae. Other marine invertebrates whose populations have been threatened by the harvesting of wild stock, such as Giant clams (Tridacna sp.), have benefited substantially from the research and practice of culturing through sexual reproduction (Ellis 2000). In addition to the potential profits associated with the culture of Tridanca clams, there has been an increase in wild populations that has resulted from the reduction in wild stock harvesting (Minogoa-Lucuanan and Gomez 2002).

One of the challenges involved with the culture of coral larvae into adult colonies is the high rates of mortality during the first month post metamorphosis (Gateno et al. 2000, Szmant & Miller in press, L. Goldman, pers. obs.). Survivorship increases, however, as the age and size
of the juvenile increases (Gateno et al. 2000, Raymundo & Maypa 2004). Therefore, to ensure high rates of survival, growth during the first month must be maximized. The addition of food can make significant contributions to the growth of marine invertebrates including corals (Ellis 2000, Borneman 2001, Rhyne & Lin 2004). Different food sources, however, can have varied performances and production costs which may affect colony growth and the overall financial investment. With the increase in demand for corals in the aquarium trade and the continual degradation of natural reefs around the world, new techniques in coral culture must be investigated. 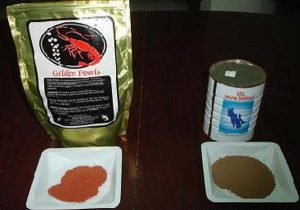 Three treatments, live food (Artemia franciscana, GSL© Premium, 400μm), artificial food (Golden Pearls©, 400 μm), and no food (control) were replicated 3 times for each group of planulae donated from a single colony (Figure 1 and 2). The experiment was repeated 6 times using planulae donated from 6 different individual colonies. This experimental design is known as a ‘clonal design’. Using planulae in all of the treatments donated from a single colony gives me better control over any genetically-based variation that may exist between different genotypes. Ultimately, I can conclude with more accuracy that any differences in growth between colonies may be due to the different treatments (food types). Replication comes from the 6 times I repeat this experiment, using a different parent colony each time.

Each 500ml cup contained one juvenile Pocillopora damicornis colony and was supplied with aeration via an outdoor, 50W air pump. Temperature was maintained by placing the cups in a water bath (25º C) and a 70% shade cloth was used to minimize over exposure to direct sunlight. Nutritional values for A. franciscana and Golden pearls© were reported to be similar (Artemia Int’l 2007). I found that using 0.55 g of GSL© 90% Premium hatch (400 μm) and 0.50 g of 400 μm Golden Pearls© in one liter of water produced equal amounts of food. Each night, I used a 5 ml pipette to extract 3.5 ml of enriched seawater which was distributed into each treatment cup. Food remained in the cups overnight. The following morning 100% of the water was changed and no additional food was added. Data was analyzed using a two-factor ANOVA (factors: treatments and clones). Count data was square-root transformed prior to analysis. 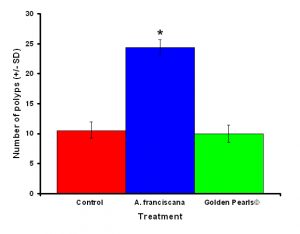 Figure 3: Colonies fed live food (Artemia franciscana) showed a significantly higher number of polyps than either the colony fed the artificial food (Golden Pearls©) or fed a no food control. Treatments with an asterisk were significantly different. Values were untransformed for clarity. 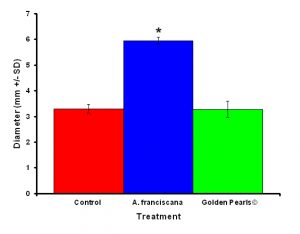 Figure 4: Colonies fed live food (Artemia franciscana) showed a significant increase in colony diameter compared to colonies who were fed either the artificial food (Golden Pearls©) or fed a no food control. Treatments with and asterisk were significantly different. 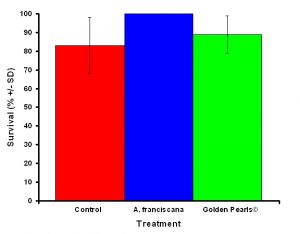 Figure 5: Although the differences were not significant, corals fed live food had a higher average survival rate compared to corals fed artificial food and corals that received no food.

Although A. franciscana and Golden Pearls© have similar nutritional values, colonies fed live food showed a significantly higher growth rate. Because corals are sessile, the exposure to food is dependant upon water flow (Sebens et al. 1998) or the locomotion of the prey, as in the case of Artemia spp. Corals consume a variety of reef organisms (Goreau et al. 1971) and will continue to consume prey as long as it is available, never becoming satiated (Ferrier-Pages et al. 2004). Observations on the availability of each of the food item revealed that Golden Pearls© remained buoyant for only one hour after being distributed into the treatment cup compared to A. franciscana which remained continuously active in the water column. Therefore, because the artificial food did not circulate and sank to the bottom, it is probable that corals in the artificial food treatment were not exposed to as much of the Golden Pearls© as corals who were fed A. franciscana. This conclusion may seem fairly obvious and pretty straight forward. The manufacturers of Golden Pearls© promote their product as being ‘neutrally buoyant’; however, this was not the case (at least for an extended period of time). In their defense, they developed the food as a replacement for Artemia spp. used to feed young shrimp; highly mobile creatures that have no qualms about seeking out their food. Most corals do not have that ability and, thus, any type of food that cannot consistently remain in the water column may not be the best choice for corals. Although I believe this to be the major (and obvious) factor that produced these results, there may have been other factors at work here.

Figure 6: Coral colonies in each of the three treatments: a: Control; b: Artemia franciscana; c: Golden Pearls©. Note the substantial algal growth in artificial food treatment compared to either of the other two treatments.

An equally important observation was how water quality and the colonies were affected by the different food items. Most aquarists who care for a variety of corals understand that food additions can be a necessary evil. One the one hand, feeding corals promotes their health and growth; on the other, food contributes substantially to the quality of water in which the corals live. Nutrients associated with food are usually released into the water and may negatively affect water quality. Since many corals are vulnerable to even minor changes in water quality, the quality of food must be considered. In this experiment, I did not test water quality. The growth
responses that I observed in each treatment and previous studies on the results of elevated nutrients on corals and seawater systems, however, permitted me to speculate on how the food item affected water quality.

In 1991, Stambler et al. performed a nutrient enrichment experiment on Pocillopora damicornis. Motivation for this experiment came from the need to understand what kind of effects elevated nutrients have on coral reefs. In the experiment, they examined two the effects of dissolved inorganic nitrogen and phosphorous on the growth of P. damicornis. They found that the addition of ammonium (nitrogen) did not lead to an increase in growth of the coral; rather, it led to an increase in algal growth. In this case, the algae were symbiotic zooxanthellae contained within the polyps of the coral. Phosphorous, in combination with nitrogen produced similar results, but phosphorous alone did not result in any changes to either the algae or coral. Stambler and his colleagues suggested that the lack of growth observed in the coral may be due to the higher energy demands from the increasing algal populations, thus no carbon was translocated to the coral from the algae. Their findings (and discussions) were consistent with previous work by Muscatine et al. (1989) who used Stylophora pistillata as their test subject. 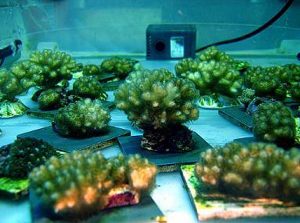 Photo 2: Colonies at 11 months. Most colonies have reached the minimum size for commercial distribution (Diameter = 50 mm)

Live food may incur higher production costs in the form of labor and equipment than artificial food; however, this study showed that the increase in colony growth and survival may be an acceptable trade-off. Although no conclusions can be made about the artificial food and its
effects on coral health and water quality, it is apparent that artificial food did not promote coral growth, rather only algal growth. In my experience, substantial algal growth may be detrimental to the health and survival of juvenile corals. My observations are consistent with other studies on the growth and survivorship of juveniles on the reef (Sato 1984; Babcock and Mundy 1996).

This work, in combination with previous studies, has made substantial contributions to the refinement of this method and, although this experiment focused on coral recruits, the results can be applied to current techniques used for maintaining adult colonies as well. Future studies will investigate other live foods such as rotifers and algae and investigate other artificial foods and their effects on water quality. By growing corals from sexually produced larvae, farms can supply the aquarium trade demand as well as provide corals for conservation programs without having to harvest or sacrifice coral colonies from existing reefs.

Lee Goldman earned his Masters degree in Marine Biology at the University of Guam, where he also works as a research associate at the College of Natural and Applied Sciences, Guam Aquaculture and Development Training Facility.