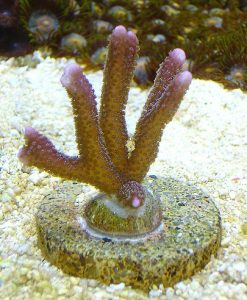 There’s nothing special about the frags we used, as we simply tested everything that we have five of.

It might seem counterintuitive that corals of various sorts can survive a lengthy exposure to air, considering they’re generally thought to spend their entire lives submerged in seawater. However, many do not spend all their time underwater and are, in fact, exposed to air fairly regularly. As best as I can tell most corals are able to cope with such exposures without problems though, which is good news for hobbyists and businesses that may have the need to transport coral specimens with little or no water.

Despite this, I frequently meet folks that are quite surprised when I carry coral frags on flights in my carry-on bag without water; something I’ve done successfully many times since airport security changed so much after 9/11. In fact, in July I spoke to the Mid-Columbia Marine Aquarium Club in Pasco, Washington and flew back to Tampa with frags from seven different stony corals (4 x Acropora spp. and 3 x Seriatopora spp.). I dumped the water from the bags just before going into the airport, and everything made it home fine. The total time between pouring out the water, flying home via Salt Lake City, getting my car and driving to the house, and putting the frags into a tank was just under 8 hours. That’s about as far as you can fly within the continental U.S., of course. Likewise, in August I spoke to the Boston Reefers Society and picked up six more frags (3 x Acropora spp. and 3 x Montipora spp.). Due to a lengthy layover at J.F.K. followed by a flight delay, the total time of exposure for the frags was almost 10 hours! That was actually long enough that I started to worry myself, but again, everything was fine.

Many people seem to be somewhat skeptical about trying the same thing, especially if they have a relatively long travel time. So, with the assistance of my co-worker and fellow hobbyist Dr. David Flanigan, I carried out a simple experiment to help alleviate some of these worries. However, before I tell you about the experiment and results, I’ll go over why, specifically, corals are exposed to air at times, even on the reef, and how they deal with it. It all has to do with the tides.

The oceans rise and fall every day, which we see as tides. However, the amount of rising and falling changes from day to day. The cause for this variability is the ever-changing alignment of the Earth, Moon, and Sun, as the Sun gravitationally tugs on the Earth, and the Moon does, too. You’d think the Sun would exert the greatest pull, but it’s so much further away from us that the Moon’s pull is actually stronger. After all, the Sun is on average about 93,000,000 miles away, while the Moon is an average of only 240,000 miles away. Anyway, when these celestial bodies pull on the Earth, the seas directly underneath them rise up slightly as a bulge, which we see as a high tide. And the Earth is turning at all times, of course, so the bulge seems to move across the surface of the Earth in bodies of water. Oddly enough, following the Laws of Physics, a roughly equal size bulge simultaneously rises on the opposite side of the Earth, and the locations in between these two bulges
experience low tides at the same time.

With that out of the way, the point is that when Spring tides occur in many areas, the tops of the reef can be left completely exposed. To survive, the corals (stony and soft) produce a protective coating of mucus in order to stay wet. All of them retract their polyps during this time, and soft corals shrink down and slump over. By the way, giant clams (tridacnids) are also left exposed at times, and can obviously survive some time out of water, too. We’re not testing them, though (yet?).

I was fortunate enough to visit Bunaken National Marine Park (near Sulawesi, Indonesia) during a Spring tide. In these photos you can see that much of the reef crest is exposed, as well as many patches of coral on the grassy flats behind the crest.

On the other hand, I should add that while I’ve seen many corals and clams out of the water on exposed reefs, there were some creatures that were absent. For example, I’ve seen almost no sponges living in spots where they could become exposed. There have been a few, but these must have some special adaptation that allows them to do so. Likewise, I don’t recall seeing many sea fans/gorgonians out of water. I don’t know why these wouldn’t be able to tolerate exposure when so many of their cousins can, but it seems that they can’t as best as I can tell. I have seen a few become partially exposed during really low tides in the Bahamas, but only a few, and that’s it. I would have assumed this to be the case anyway, as hobby experience has given me the impression that they should never be exposed to air at all if possible, or for only a few minutes at most if absolutely necessary. There are care guidelines all over the Internet and in books that say the same, too.

You should also keep in mind that in addition to occasional exposure to air, emersed corals are simultaneously exposed to direct tropical sunlight, high air temperatures, and oftentimes rain. This is especially true in regions along the equator, where general air movement is upwards. This results in the lifting of moisture-laden warm air, which subsequently cools as it rises higher in the atmosphere and creates clouds. Lots of big clouds, which create thunderstorms by the thousands. That, of course, leads to heavy precipitation along the equator on a regular basis, and this will obviously coincide with the emersion of corals from time to time. Precipitation is frequent in other tropical areas, as well. So, in their natural habitat, many corals are subjected to something of a roasting, and a freshwater dip, too. They can obviously be tougher than we tend to think, and keeping this in mind, it should not be such a surprise to find that many corals can survive in a bag without water for several hours. 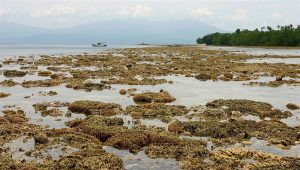 To start, I have to take a second to thank Richard Sullivan for donating a 180 gallon tank, Ike Eigenbrode of Current USA for our Outer Orbit lighting fixture, Jason Kim of AquaC for our Remora Pro skimmer, Bob Studt of United Pet Group for supplying our Reef Crystals salt mix, Scott Cohen of Sea Dwelling Creatures for providing Blue Life kalkwasser, and Jon Simmons of Boston Aqua Farms for a load of frag discs/bases and glue. With these materials, David and I set up the 180 gallon tank at school, and over a couple of months fragged several of our own corals and placed the specimens in it. After letting them spend several weeks in the tank, we performed our experiment. 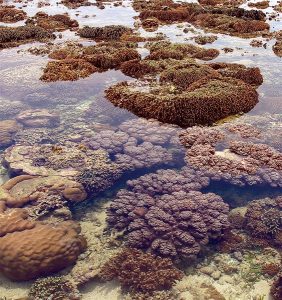 We used five small specimens of each of the following species: Pavona cactus, Montipora digitata, Monitipora capricornis, Montipora spongodes, Nephthea sp., Pachyclavularia violacea, and Anthelia sp. Each specimen was taken from the tank and placed in a small (sandwich size) re-sealable plastic bag. Each bag was then sealed immediately after adding the specimen.

As each specimen was sealed in its bag, we noted the time of closure, and the bags were re-opened after 6 hours had elapsed. The specimens were then immediately placed back into the tank, and observed regularly for the next several days. Note that all specimens were kept at room temperature (76°F) for the duration of their time out of water.

The results: After one week, all 5 specimens of all seven species tested were still alive and appeared healthy with no apparent change in color or degree of polyp extension. In fact, all were looking fine and had normal body/polyp extension the morning following the experiment. 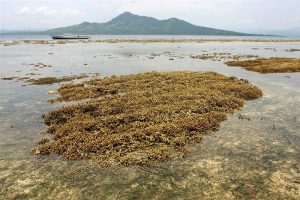 Considering that the majority of domestic flights are less than 6 hours, we believe these seven species can be transported without water with little worry. However, it is possible that the initial health of a specimen and/or a significant change in temperature could have an effect on survivability. Thus, we recommend only doing this with specimens known to be in good health, and that they should be kept at approximately room temperature for the duration of travel. 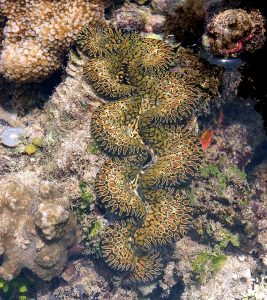 While we don’t have any tridacnid specimens to test, many of them were also left exposed during this extreme low tide event and are known to survive temporary emersion. This gorgeous Tridacna maxima I came across was just minutes away from being out of the water.

David and I are working on building up a larger and more diverse collection of frags to expand upon this experiment and to start some others. However, there are only so many frags we want to produce from our own aquariums, especially considering that they may be killed (for the sake of knowledge). Regardless, when/if enough are available, we’ll try longer periods of emersion, and test more species, too. So, if any readers care to donate any number of frags of any species of coral, or a specimen large enough to split in to several frags, please contact me at jfatherree@hccfl.edu. Thanks!