This month, our discussion of Super Corals continues with a focus on an attractive stony coral Montipora undata. To my knowledge, this coral has no common name.

With proper conditions, this Montipora species can grow quickly, and its green fluorescence along with reddish-purple tips and white polyps makes it appealing.

Note that observations presented in this report are of only one specimen containing an unknown zooxanthella clade. However, there is still a lot of information available. We’ll begin our discussion with the ‘types’ of zooxanthellae known to infect M. undata specimens. 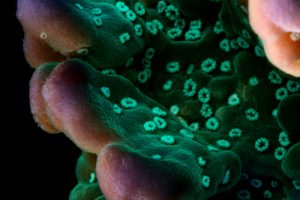 These works are important to hobbyists if we subscribe to the hypothesis that corals containing the same clade(s) zooxanthellae will have the same adaptive capacities to light intensity. As technology evolves, and more samples are studied, our knowledge will undoubtedly change about coral/symbiont relations. For the moment, this is the best information we have.

M. undata– How Much Light?

Second only to ‘How much is it?’ is usually ‘How much light does it need?’ And, the answer is ‘Not much, relatively speaking.’ Figure 1 shows the rate of photosynthesis of a single M. undata specimen under various light intensities (See ‘Methods and Materials’ for a description of equipment used to measure photosynthesis).

Figure 1. The rate of photosynthesis (relative Electron Transport Rate, or rETR, shown by the orange line) of a Montipora undata. In this case, maximum photosynthesis occurs at a PAR value of ~200 µmol·m²·sec. Increasing light intensity above this point is counter-productive as photoinhibition occurs.

Perhaps some explanation is needed in order to understand the chart. The curved orange line demonstrates the rate of photosynthesis (rETR, for Electron Transport Rate between Photosystem II and Photosystem I) relative to light intensity (the yellow numbers at the bottom of the chart and labeled as ‘PAR’ – for Photosynthetically Active Radiation). A quick inspection says maximum photosynthesis occurs at PAR values of about 180-200 µmol·m²·sec (or ~9,000 – 10,000 lux). The chart also has other information – that of ‘on-set of photosaturation.’ The method described by Kirk (1983) is used to determine on-set of saturation. If the initial rate of photosynthesis (characterized by the left hand side of the orange line in the chart of Figure 1) was to continue in a linear fashion (the green line), its intersection with the maximum rate of photosynthesis (the red line) is the onset of photosaturation (the vertical yellow line intersect with the PAR values at the bottom – in this case,
onset of saturation is in the neighborhood of 110 µmol·m²·sec (or ~5,500 lux) with full-blown photosaturation at 180-200 µmol·m²·sec (or ~ 9,000 – 10,000 lux).

Note: The specimen in the introductory photograph is maintained under one of PFO’s very early LED prototypes.

Some Montipora undata specimens contain at least two pigments generated by the coral animal. These include a fluorescent protein with an emission peak at ~490nm (blue-green; See Figure 2) and an unidentified non-fluorescent chromoprotein (that appears reddish-purple under full spectrum lighting. It will appear bluish under high kelvin light sources).

Figure 2. The blue-green fluorescent pigment has an emission peak at ~490nm.

In all cases, excitation wavelengths are in the violet/blue portion of the spectrum. This suggests FP-490 is best viewed under high kelvin lamps (note that UV energy also excites this fluorescent pigment and causes it to ‘glow’, but is not necessary). However, the purple-red non-fluorescent chromoprotein will appear dark blue. Supplemental warm light will make the purple apparent and, subjectively, more appealing.

I have not been able to identify the non-fluorescent protein’s maximum reflectance or absorbance. This pigment is generated by the coral animal (and not zooxanthellae) and is usually seen in high growth areas. It is uncertain if this particular pigment eventually ‘kindles’ into the fluorescent green pigment (which would explain why the pigment disappears as the growth areas phase from new to old. Much work remains to be done before we understand these pigments’ natures and purposes, if any).

This coral species does not seem especially demanding in its water flow requirements – flows measured in an aquarium found water velocity to be ‘average’ for a ‘real’ reef – 0.5 ft/sec (See ‘Methods and Materials’ – below – for water velocity testing protocols).

Although one half foot per second does not seem like excessive velocity (it equates to roughly 1/3 mile per hour), it does take some effort to generate this velocity in aquaria. Fortunately, the ‘propeller pumps’ now on the market make generating this sort of water flow quite easy.

Carbonate alkalinity is important for two reasons – it buffers against downward shifts of pH and also provides carbonates necessary for building the corallum or skeleton. Use any of the commercially available buffers to maintain an alkalinity of 175 mg/l (as CaCO3) or ~3.5 meq/l. Calcium concentrations of at least 400 mg/l are recommended although values of up to 450 mg/l have been observed and seem acceptable.

Zooxanthellae clades (a clade is something like a sub-species) found in M. undata are not known to be particularly heat-resistant.To avoid potential overheating of coral specimens, water temperature should not exceed 80º F when using metal halide lamps or other lamps that operate at very high temperatures (mercury vapor lamps, for instance. See Riddle, 2006 for details). This is due to absorption of heat by the coral skeleton, where it can become warmer than ambient water temperature.

This coral will grow very quickly when conditions are correct. Specimens can double in size in just a few months.

Fragmentation of this coral is easy. It can be accomplished with a Dremel tool with ‘cut-off’ blades or with a ‘wire cutter’ pliers (preferably stainless steel).

Mahalo to Steve Ruddy with Coral Reef Ecosystems (www.coralreefecosystem.com) for his invaluable assistance in preparation of this article.

The ocean realm entered was Indo-Pacific. The exact collection point is unknown, so two likely locations were entered:

If the coral was collected from the Central Indo-Pacific (including the Philippines, Malaysia, Indonesia and the Solomon Islands), choices are M. undata, M. danae and M. confusa (with the software’s ‘Best Bet’ Option choosing M. undata).

If the coral was collected from the oceanic west Pacific (including the Palau, Vanuatu, Fiji, and the Marshall Islands), the software’s ‘Best Bet’ Option chose M. undata).

These are the other data points used for identification (based on microscopic examination of the skeleton and inspection of enlarged photographs of living animals):

Water velocities were measured with a Marsh-McBirney Flo-Mate 2000 electronic digital water velocity meter. This meter operates on Faraday’s Law and reports velocity with a resolution of 0.01 foot per second.

Rates of photosynthesis were determined with a Walz ‘Teaching PAM’ Chlorophyll Fluorometer (Effeltrich, Germany) equipped with a fiber optic cord. A fluorometer is basically a ‘photosynthesis meter’ and exploits measurements of chlorophyll fluorescence in order to determine rates of photosynthesis (in terms of ‘electron transport rate’ or ETR between Photosystem II and Photosystem I within zooxanthellae). Corals were maintained in total darkness for at least one hour before initial measurements were made in order to allow Photosystem reaction centers to ‘open’. The external actinic light source was a 400-watt Iwasaki 6,500K metal halide lamp that was shielded for ultraviolet radiation by a clear acrylic material. Intensity was adjusted upwards by moving the light source closer to the coral (which was contained in a 3-gallon plastic container). Light intensity (Photosynthetically Active Radiation, or PAR) was measured with an Apogee QMSS quantum meter and a submersible,
cosine-corrected sensor. Water motion was provided by a magnetic stirrer and 3″ stir bar.

After the dark-adaptation period, minimum chlorophyll fluorescence (Fo) was determined with a weak pulse of light generated by the instrument’s internal actinic lamp. Maximum Fluorescence (Fm) was estimated by increasing the intensity of the internal actinic lamp, resulting in a photosynthetically-saturating pulse of light. Once minimum and maximum fluorescence values are established, the instrument can determine the relative Electron Transport Rate (rETR) under different lighting conditions.

The PAM meter calculated Photosynthetic Yield, which was simply multiplied by the appropriate PAR measurement in order to estimate the rETR. This is a valid method for observing photosynthetic trends. Technically, it is not the preferred method of determining absolute ETR, but it is fine for our purposes.

Fluorescence was determined with an Ocean Optics USB-2000-FL fiber optic spectrometer (Dunedin, Florida) using an 18-watt black light (maximum emission at 365nm) as the excitation source. Light was collected with a cosine-corrected CC-3 lens and a 600 micron fiber optic cable.

The photograph was taken with a Canon Rebel XTi digital camera (10.1 megapixels) equipped with two stacked teleconverters and a 60mm macro lens.

Hot Tips: How do you choose a LFS?