The first four installments of this series dealt with fluorescent proteins found within various anthozoans. An understanding of fluorescence is needed before we examine another phenomenon – that of reflective pigments within coral tissues, which in turn is a prerequisite to understanding spectral data collected from various corals (presented later in this series).

There is considerably less attention paid to these pigments by scientists. Since they only reflect light (and do not fluoresce and hence are not particularly useful in biomedical research), these pigments have received the attention of far fewer researchers. However, these colored pigments are of interest to those reef aquaria hobbyists wishing to exhibit vibrantly colored corals within reef aquaria.

It is a common mistake to contribute all vivid coloration of corals to fluorescence – many corals’ beautiful blues, purples, pinks or reds due to the presence of chromoproteins.

Chromoproteins (from the Greek words ‘khroma’ (color) and ‘prote’ (primary)), for our purposes, are organic pigment-containing compounds that simply absorb and reflect radiation – they are normally not fluorescent or only weakly fluorescent. Their coloration is generally purple-blue (Labas et al., 2002), although violet, blue or pink/red chromoprotein pigments are known to exist. Generally, these pigments absorb light in the bandwidth of ~560- ~590nm (though there are exceptions). See Table 2.

Different terminology is used when discussing non-fluorescent chromoproteins. These are some terms with which we should be familiar:

Absorb: To retain light without reflection or transmission.

Absorption: The process in which incident radiation is retained without reflection or transmission on passing through a medium.

Absorbance: The ability of a solution or layer of a substance to absorb radiation. Expressed mathematically (for those who want to know) as the negative common logarithm of the transmittance of the substance and abbreviated as ‘Abs’.

FWHM = Full Width at Half Maximum. The spectral width (in nanometers) at the level that is 50% of the value at the peak.

Reflect: To ‘bounce back’ light without alteration of wavelength.

Reflection: The process in which incident radiation is returned without alternation of wavelength, in others words; reflected light is not absorbed or fluoresced.

In the cases of non-fluorescent chromoproteins, that light energy that is not absorbed by a substance (coral tissue, host pigments, photopigments) is reflected, and apparent color is a combination of absorbed and reflected light. One of the most apparent examples of apparent color is that of green leaves containing chlorophylls. Since chlorophylls absorb red and blue light, the majority of the light reflected is green. Corals containing zooxanthellae are often brown, since the zooxanthellae contain chlorophylls and peridinin which absorb blue, green and red light, thus making them appear brown. Corals containing chromoproteins will usually appear purple-blue, but can be almost any color of the rainbow.

Defining color by bandwidth would seem a straightforward proposition. However, few references agree. For clarification, see Table 1 for a listing of bandwidth and associated colors used in this article. 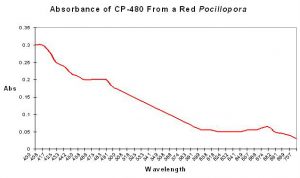 Figure 2. This pigment appears red since it absorbs mostly blue and green light. From Shibata, 1969.

CP-500 is reportedly found in a yellow Acropora specimen from Australia’s GBR (Shibata, 1969). See Figure 4 for absorption of a water-soluble pigment that appears yellow.

Chromoproteins with absorption maxima are found in a variety of corals including (but likely not limited to) Pocillopora damicornis, Stylophora pistillata and Acropora species.

This reddish chromoprotein is found in the anemone Anemonia sculata var.rufescens (specifically referred to asasCP-562). Figure 9. This is an interesting pigment – ‘green’ light (540-560nm – ‘yellow-green light according to our definition) transforms (‘kindles’) non-fluorescent CP-562 (which appears red) to a fluorescent state with an emission maxima of 595nm (which appears as red fluorescence due to the emission bandwidth). This pigment, along with CP-580, blows a neat hole in our tidy concepts of fluorescent and non-fluorescent pigments – these can be both! See http://www.advancedaquarist.com/2006/11/aafeature2 for further details. 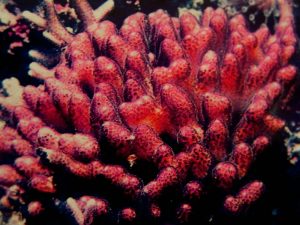 We have reviewed the absorbance of several non-fluorescent proteins found in anthozoans. The reader will have noticed that these chromoproteins appear red or pink in color. Next time, we’ll continue our examination of chromoproteins and review those responsible for purple, blue and violet coloration. We’ll also introduce the concept of reflectance, and what it tells us about not only color, but the health of the coral host and its symbiotic zooxanthellae.

I’m in the process of updating the reference list and will include that at the end of this series. Those interested in discussing coral pigments can reach me at RiddleLabs@aol.com 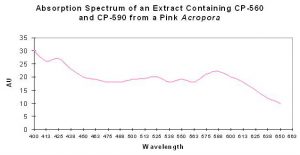