There are many interesting and beautiful pygmy angelfishes that lurk in deep fore reef habitats. Most of us aquarists have lusted over the striking peppermint or Boyle’s angelfish ( Paracentropyge boylei ) – the pomacanthid that mimics a barber pole! And how about the amazing deep-reef pygmy angelfish ( Centropyge narcosis ), a fish that when threatened performs a headstand. While these two species are as expensive as a new economy car and are rarely available, there are some deep water pygmy angelfishes that are affordable and that do show-up with some degree of regularity.

One of these species is Colin’ angelfish ( Centropyge colini ). I first encountered this wonderful fish at a fish collectors warehouse in Fiji in the mid-80’s. Up until then, I didn’t know that anyone was collecting it. Since that time, it has been showing up in the aquarium trade with some degree of regularity. I have had the good fortune to keep a few of these fish in my home aquarium and would like to share some of my observations, as well as some natural history notes that may help the C. colini fan in his aquarium keeping efforts.

Colin’s angelfish is known from Cocos-Keeling Island in the Indian Ocean, Papua New Guinea, Palau, Guam and Fiji in the Western Pacific. It is a medium- sized pygmy, attaining a maximum length of 3.5 inches. It is a secretive fish that is found in deep fore reef habitats, like steep slopes or drop-offs. This angel occurs at depths from 55 to 250 feet. However, in most areas it is not common at depths of less than 120 feet. Colin’s angel usually inhabits caves and big cracks in the reef. It is also seen swimming upside down under large overhangs among orange cup ( Tubastraea spp.) and black corals ( Antipathes spp.). It often shares these habitats with the multibarred ( Paracentropyge multifasciata ) and the regal angelfish ( Pygoplites diacanthus ).

Colin’s angelfish occurs singly or in groups, with as many as five individuals having been observed in the same large cave. Like most other pygmy angels, it is probably haremic. Nothing is known of its food habits, but it has been suggested that it may feed on microalgae and possibly sponges. 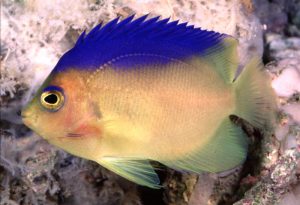 Colin’s angelfish is a beautiful but delicate pomacanthid that spends most of its time in caves and under ledges.

Colin’s angelfish is a secretive, delicate fish that needs to be treated with the utmost care if it going to survive in the home aquarium. The biggest challenge in keeping C. colini is to get this shy fish to acclimate to its captive home. To increase your chances of success, you should house it in an aquarium with plenty of hiding places and nonaggressive tankmates. I would recommend keeping this fish in a tank of at least 55 gallons (although I have housed it in smaller aquariums). The aquarium should be in a low traffic area of your home or office, to prevent human activity from frightening this fish. Dither fish, like Chromis spp. or a small group of flasher wrasses ( Paracheilinus spp.), will help encourage this fish to come out of hiding to feed and investigate its new home. Even when conditions are perfect, this fish will spend much of its time moving among rock work while acclimating to its new domicile. 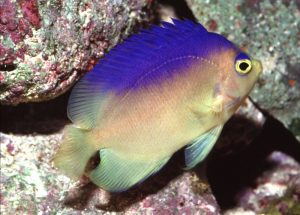 Centropyge colini is collected from deepwater on western Pacific reefs.

One of the best ways to help you Colin’s angel “feel at home,” which will facilitate the fish’s acclimation and make it easier for you to observe, is to create a cave or overhang in the aquarium. There are several ways to do this. One thing to remember before constructing these structures is that stability is of the utmost importance. If a cave or overhang should collapse, the rockwork may crush a fish or even break the aquarium glass. One of the easiest ways to create caves is to use live rock of varying shapes and sizes. Just take a flat piece of rock and prop it up on both ends with rocks that are more round in shape. If the flat rock projects to far forward it may be necessary to place a rock on the back of the flat piece to stabilize it.

Plexiglas stands or acrylic rods, which have been attached to a square base, can be used to help support the roofs of caves and overhangs. If you have a larger tank and want to create an impressive overhang near the surface you can also place a stout board (2″ by 4″) along the length of the tank. Use a drill, with a masonry bit, to place holes in a flat rock and cable ties to attach the rock to the board. Place the back of the rock against the reef wall that you built-up along the back of the tank. This will give the impression that the rock is attached to the reef and extending into the water column.

A thick piece of acrylic that has been bent into a U-shape with a wide flange on each edge can also provide a structure on which to stake rock and create a cave. The width of the piece of acrylic selected will determine how deep the cave will be. There are other ways to create these structures, just use inert products and your imagination!

Colin’s Angelfish occurs in deepwater and, therefore, is more likely to suffer from decompression related maladies. The last individual I kept developed a lesion on its side soon after I acquired it. I suspect the infection may have resulted from the fish having been needled when it was brought to the surface. This technique involves using a hypodermic needle to “bleed” gas from the air bladder so that it is not damaged (remember Boyle’s Law, i.e., as pressure decreases, volume increases). In many species this technique works well and causes few subsequent health problems for the fish. But some fish seem to be more susceptible to future infections as a result of this process. 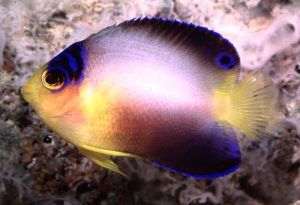 The multicolor angelfish (Centropyge multicolor) is often collected along with C. colini. It tends to be more hardy than C. colini.

My C. colini subsequently contracted a bad case of ick ( Cryptocaryon irritans ), I believe as a result of its compromised immune system, and eventually died. That said, I would suggest you select your C. colini very carefully. Avoid specimens that do not swim in a normal Centropyge-style – that swim with their tails above their heads and seem to have a difficult time maintaining their position in the water column. This is often indicative of a air bladder problem. Also look at the belly and dorsal musculature of this fish you thinking of purchasing. If the belly looks pinched in, and even worse, if the dorsal musculature looks atrophied, it indicates that the fish has been in a wholesalers tank for a while is emaciated, probably not having fed for the entire time it was being held.

Behavior Toward Fish and Invertebrate Tankmates

Do not keep this angel with more aggressive tankmates. If picked on by larger or pugnacious angelfishes, belligerent dottybacks, larger damsels, or any other aggressive fish its chances of survival are very slim. Although it makes for an interesting display, I would avoid housing it with the sympatric multicolor angelfish ( Centropyge multicolor ). I have had it dominant C. colini in smaller tanks. Both species share microhabitat preferences, which may lead to more agonistic interactions. Of course, keeping C. colini in a larger tank with plenty of suitable hiding places will help in preventing some of the behavioral problems that may occur if it is kept with moderately aggressive tankmates. 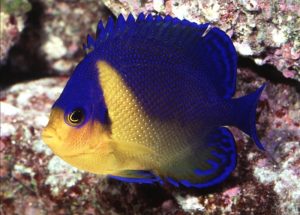 The venusta angelfish (Paracentropyge venusta) is somewhat similar in color to C. colini and is also one of the more delicate pomacanthids

Is Colin’s angelfish suitable for a reef tank? First of all, I should point out that a reef tank is a perfect environment for keeping C. colini. Reef tanks are usually replete with caves and crevices for these fish to refuge in. There are also natural foods on the live rock that this fish may pick at during the acclimation process. But unfortunately, this species has been known to damage stony corals. The individuals that I have kept have nipped at zoanthids and incessantly bite the large-polyped stony (LPS) corals, Cynarina and Scolymia. They are apparently a threat to many of the LPS species, like the elegance ( Catalaphyllia jardinei ), open brain ( Trachyphyllia geoffroyi ), and tooth coral ( Lobophyllia spp.). My Colin’s angelfish did not bother Euphyllia corals, a variety of soft corals and mushroom anemones – however, that does not mean that these corals will always be immune to being picked on! Pygmy angels of most types are less likely to cause problems if the tank is larger and they are fed more frequently. In the case of C. colini, they often do not feed for a while in captivity so they are more likely to look for a more “natural” prey source (e.g., a large, fleshy coral polyp).

In conclusion , some individuals will adapt and thrive in the home aquarium, even to the point of readily accepting flake food and frozen preparations. But without the special requirements described above, this species typically pines away in the home aquarium. It is only suitable for those aquarists that are willing to meet its special needs. Happy fish-watching!