I wrote an article back in 1998 on the regal angelfish ( Pygoplites diacanthus ) for the now defunct publication, Aquarium Frontiers. To this day, that article still generates interest and questions. I imagine this is because the regal angelfish is one of the most beautiful fish in the sea and desired by many marine aquarists. Unfortunately this gem is not easy to maintain in captivity. I’ve kept a regal angelfish for seven years now and learned a few tricks and techniques along the way. 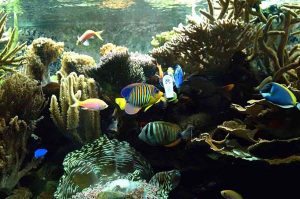 The regal angelfish is the only member of the genus Pygoplites, which is part of the greater family of angelfish, Pomacanthidae. It can be found throughout the Northern and Western Indian Ocean, the Red Sea, and the Indo- Pacific Ocean. Regal angelfish are not sexually dichromatic, but color differences do exist between specimens from the Red Sea/Indian Ocean and those originating from the Indo-Pacific region. Red Sea/Indian Ocean specimens exhibit a bright orange coloration throughout the ventral area and under the mouth. Those from the Indo-Pacific region are blue-gray in this area. The distinction is clear in adult specimens but somewhat harder to discern in juveniles.

Juveniles are similarly colored to adults except for a large false eye-spot at the base of the dorsal fin. This fades as the fish matures and it’s gone by the time the fish reaches a length of 6-7 cm. This is atypical for Pomacanthids. Most of the bigger angelfish don’t transform to adult coloration until they’re much larger in size.

Regal angelfish naturally inhabit areas of rich coral growth in both lagoons and outer reefs from 1 to 50 meters deep. They are commonly observed as solitary individuals and in pairs, but can also be seen in small groups. These haremic groups typically consist of one male and two or more females. The maximum adult size is reported to be between 20 and 30 cm (8 and 12 inches). All regal angelfish are relatively cryptic and never stray far from a reef crevice. Juveniles, in particular, are more guarded than adults and often found in the vicinity of caves. They graze on benthic invertebrates in nature, with a particular fondness for sponges and tunicates. Recently acquired specimens can be observed eating with a side-ways ripping motion, even when feeding from the water column. This is how they tear pieces of sponge from the reef. They lose this habit as they become accustomed to a diet of prepared foods. 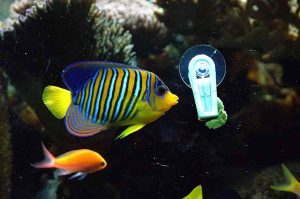 The author has kept this regal angelfish ( Pyglopites diacanthus ) for over 7 years in his reef aquarium. Here it is enjoying Pro-V gelatin food attached the front glass along the left side of the reef aquarium.

Regal angelfish don’t adapt easily to captive life. It’s one fish that almost requires a quarantine period in order to become used to aquarium conditions and be treated medicinally if necessary. I suggest a quarantine tank of not less than 20 gallons with a few hiding places created from PVC pipes or fittings. Alternatively, I’ve found that a refugium aquarium makes a great quarantine tank for regal angelfish and many other sensitive fish. There are plenty of natural foods available to sustain the fish while it becomes used to prepared foods, and refugium aquariums generally have good water quality. It’s important to maintain as stress-free an environment as possible during the quarantine period. If, after 4 to 6 weeks, the fish is eating well and shows no signs of bacterial infections or parasites, it can be released into the display aquarium.

Adult regal angelfish should be maintained in a reef aquarium of at least 75 gallons. Juveniles can live comfortably in 50 gallon aquariums but a bigger aquarium is always better. Larger aquariums offer more feeding opportunities, more stable water conditions, and more comfort and security in the form of hiding spaces.

It’s difficult to duplicate the natural diet of regal angelfish in captivity. I’ve found that they will thrive in captivity on a varied diet consisting of food items such as red nori seaweed, Pro-V gelatin food, mysis shrimp, and chopped krill. I roll sheets of the dried red macroalgae (Seaweed Selects from Ocean Nutrition) and place it in a clip or rubber-band it to a small rock. My regal angel eagerly eats it. It’s a great source of carotenoids (natural coloring agent). I also feed Pro-V gelatin food in a clip. Pro-V is a mix of seaweed and vegetables in a gelatin base. It has the consistency of a sponge when defrosted, which may be why it appeals to regal angels. Regal angels don’t compete well for food against quick-feeding planktivores in a community aquarium. These feeding techniques will ensure that they get a sufficient amount of food. 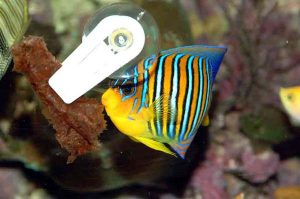 Red nori macroalgae is a good source of nutrition and natural coloring agents for regal angelfish.

Unless you have a known pair, it’s not safe to mix two or more regal angels in the same aquarium, regardless of size. Regals are relatively shy fish and they’re easily spooked by larger, more aggressive fish. They will not thrive in an aquarium with aggressive feeders or fish with belligerent personalities, such as triggerfish and large wrasses. The best chance for success is if the regal angel is the largest fish in the aquarium. Over the years I’ve been forced to remove both a hepatus tang ( Paracanthurus hepatus ) and an achilles tang ( Acanthurus achilles ). They both began to bully my regal angelfish as they grew larger than it. Furthermore, you should definitely not mix a regal angelfish with large angels of the genera Pomacanthus and Holacanthus. These fish will definitely bully a regal angelfish. Even some of the more aggressive Centropyge species (e.g., C. joculator, C. acanthops, and C. aurantonota ) will harass small regal angels if they are existing residents of the aquarium. 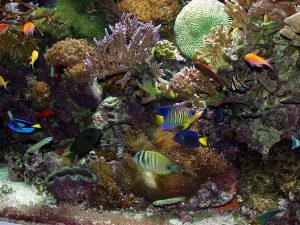 Regal angelfish ( Pyglopites diacanthus ) can be mixed with corals and clams, but there is always some risk. The author’s regal angelfish has not bothered any desirable invertebrates in his 500 gallon reef aquarium.

Regal angels are more sensitive to deteriorating water conditions than many other marine fish but they don’t have special requirements as far as water parameters. A reef-type aquarium is ideal because it provides the rocky reef structure that the fish requires to feel secure. Combining regal angelfish with corals is always a risky proposition, but they are generally “safer” than most other Pomacanthids and even most Centropyge species. If a regal is going to pick on corals, it is usually confined to a particular coral or type of coral. The decision then becomes which do you want more, the regal or the coral. Regals generally ignore Acropora species but have been reported to pick on certain large-polyped stony corals such as Trachyphyllia or certain soft coral such as Xenia. Regal angels that are well-fed are less likely to explore the aquarium for alternate sources of food.

The key to success with regal angelfish is starting with a healthy specimen. Unhealthy fish rarely recover in captivity. Juvenile specimens, in the range of 7 to 10 cm (3 to 4 inches), are ideal because they acclimate more easily than adult fish and they’re sturdier than smaller fish. Tiny regals, as seen in recent imports from Fiji, can be difficult to feed and tend to be shyer than larger individuals. The high metabolism and low fat reserves in very small fish leaves no margin for error while acclimating to life in captivity. Even a short period of starvation can result in death. Large regal angels are also a bad bet. They don’t ship well and generally have a more difficult time adjusting to prepared foods.

Regal angelfish originating from the Red Sea and Indian Ocean are generally superior to Indo-Pacific imports. In addition, they have more attractive coloration. It may be that the natural diet of Indo-Pacific specimens is more difficult to duplicate or it may simply be that Indian Ocean/Red Sea fish are collected and handled better than fish coming out of Indonesia and the Philippines. 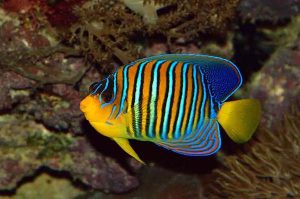 Given adequate space and proper nutrition, it’s possible to maintain the regal angelfish ( Pyglopites diacanthus ) in all its glorious colors for many years. This one resides in the author’s 500 gallon reef aquarium

Never buy a regal angelfish that will not eat. A healthy regal angelfish will usually eat live brine shrimp or frozen mysis shrimp. Also avoid fish that are not swimming normally. Regal angelfish are naturally cautious fish and may hide when you approach, but they should not be hovering near the surface of the aquarium, breathing heavy, twitching or scratching. These are possible signs of parasitic or bacterial infections.

Observe a prospective regal angelfish “head-on” for signs of prolonged starvation. “Pinching” in the dorsal musculature (the region above and behind the head) indicates that the fish is malnourished. They rarely recover from this state, even if now eating.

Avoid “bargain” regal angelfish. Healthy Red Sea specimens that have been quarantined and conditioned are not inexpensive fish, but they’re worth seeking out. Better retailers, such as Marine Center (http://www.flash.net/~rarefish/) pre-treat and condition their regal angelfish to eat prepared foods, and these fish are worth the small premium associated with that service.