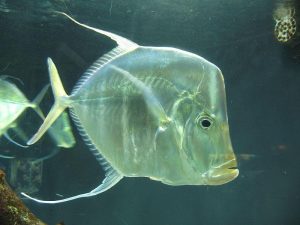 This unusually steep, straight anterior profile is a highly recognizable feature of the lookdown, and probably accounts for its common name. Photo by Milla-Maria Salo.

The family Carangidae (jacks and their kin) is a widely distributed, mainly tropical and subtropical, group of rather burly, roving, predatory fishes. On account of its relatively small size and relatively peaceful disposition, the lookdown (Selene vomer (Linnaeus, 1758)) is arguably among the most desirable–and suitable–members of this group for use in the home aquarium. All the same, captive specimens of this sizable, active, schooling species require an enclosure that is not only significantly larger, but decidedly different, than that required for most “reef” fishes (Hemdal 2006).

With the recent introduction of high quality, captive-raised juveniles into the ornamental fish trade, interest in the species is almost sure to grow; any increasing attention to this novel animal among aquarium hobbyists warrants a more thorough understanding of its natural history, as well as its aquarium husbandry. 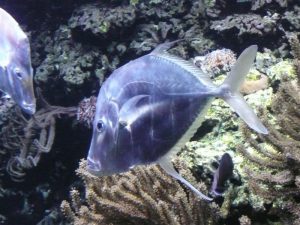 Out of their element in hard bottom habitats, lookdowns only occasionally venture onto reefs. Photo by Line1.

Lookdowns occur mainly in shallow coastal waters. They are fairly abundant (i.e., encountered consistently, albeit in smallish groups) throughout the Western Atlantic Ocean, with a range extending from Uruguay through the Caribbean to Nova Scotia (Hoes and Moore 1998, Shipp 1986, McEachran and Fechhelm 2005, Oviatt and Gray 1968). Incursions into the West Indies, Bermuda, and north of Chesapeake Bay are rare (Murdy, Birdsong, and Musick 1997, Fahay 2007, Smith-Vaniz, Collette, and Luckhurst 1999).

Selene vomer may be confused with the co-occurring moonfishes S. setapinnis and S. brownii. Reported incursions into the Eastern Atlantic are based on erroneous identifications of S. dorsalis. Two related species that occur in the Eastern Pacific have been similarly misidentified (Smith-Vaniz, Collette, and Luckhurst 1999, Collette and Klein-McPhee 2002).

Larvae are believed to develop further offshore. Juveniles are generally found near sandy shores or in estuaries, where they seek the shelter of seagrass beds, harbor piers, etc. Adults might venture onto coral reefs in search of prey, but generally occur over open mud- or sand-covered bottoms (Shipp 1986, Fahay 2007, Collette and Klein-McPhee 2002). Spawning is believed to take place further offshore (Stokes 1980).

A highly adaptable wanderer, S. vomer has been collected from waters with salinities ranging from 8.6-45.2 ppt and temperatures ranging from 16-31.3ºC (Collette and Klein-McPhee 2002).

Eggs and yolk-sac larvae of this species have yet to be formally described. Larvae are characterized principally by a very deep head and body. Flexion occurs at 4-5.5 mm length. The occipital and orbital crests of early larvae are highly developed, and decline at ~5 mm length. Metamorphosis occurs at just over 12 mm length (Fahay 2007, Collette and Klein-McPhee 2002). Two rows of preopercular spines develop in early larvae, but are lost at metamorphosis. The second and third dorsal spines elongate into filaments that may be twice the length of the body. Pelvic fins elongate as well, but shorten following metamorphosis (Collette and Klein-McPhee 2002). A pair of unattached anal spines disappear before adulthood (Shipp 1986). Juvenile lookdowns strongly resemble S. setapinnis and S. brownii from which they may be distinguished by the presence of the filamentous dorsal and pelvic spines as well as the absence of a large spot on the flank (Hoes and Moore 1998, Shipp 1986, Filho et al 2006). By maturity, the dorsal elongate spine filaments are lost; the first dorsal fin is reduced to seven or eight very short spines (Fahay 2007, Collette and Klein-McPhee 2002). 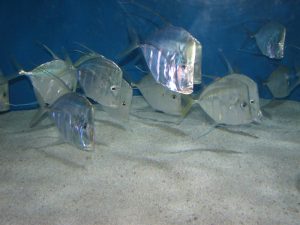 Lookdowns retain their extremely shortened, laterally compressed, deep-bodied morphology into adulthood. Morphometrically, the mature form of this species is quite distinctive, with a very small mouth set low and large eyes set high. Its slightly concave anterior profile is oblique with a dull snout; the anterior lateral line conforms to the blunted profile, curving slightly. The very slender caudal peduncle lacks the well-developed keels found on many other carangids. The caudle fin is deeply forked; body depth may be only 2.3-2.8 times the fork length (Shipp 1986, McEachran and Fechhelm 2005, Murdy, Birdsong, and Musick 1997, Collette and Klein-McPhee 2002).

Tiny, deeply embedded cycloid scales cover most of the body. Pigmentation is mainly of metallic hues, with some variation among age and regional groups. Rows of spots emerge along the head, fin bases, and posterior midline of larvae, forming bars by metamorphosis; bars often develop into faint, dusky golden or steely gray crossbands on juveniles, which disappear into adulthood. Mature individuals are of a more or less solid silver or light gold color, though a metallic blue sheen may be present above the lateral line (McEachran and Fechhelm 2005, Collette and Klein-McPhee 2002).

While maximal reported sizes exceed 48 cm length, lengths to ~24 cm are most common. The all-tackle game fish record, obtained from an individual taken from Rio de Janeiro in 1993, weighed in at 2.1 kg (Shipp 1986, Murdy, Birdsong, and Musick 1997, Collette and Klein-McPhee 2002).

While drifting in open waters, early-juvenile lookdowns seek the cover of floating debris, sargassum weed, and perhaps even jellyfish tentacles as they hunt tiny pelagic crustaceans. Upon reaching the late-juvenile stage, they move towards the shore, form shoals, assume a demersal lifestyle, and begin to feed on benthic crustaceans and worms. Shoals of maturing individuals add smallish ray-finned fishes to their diet as they subsequently move into increasingly deeper waters (Shipp 1986, McEachran and Fechhelm 2005, Filho et al 2006).

While not conducive to rapid, sustained pursuit or flight, the unusual morphometry of the lookdown makes for exceptional maneuverability (sharp turns, dashes, etc.)–hence, its ability to capture elusive benthic prey items, as well as evade predators (by way of coordinated movements within a protective shoal) (Shipp 1986).

Adults are capable of generating loud grunts with their swim bladder and pharyngeal teeth when seriously threatened (Collette and Klein-McPhee 2002).

Adult lookdowns are thought to move offshore to spawn; little is known about their spawning behavior (Stokes 1980). 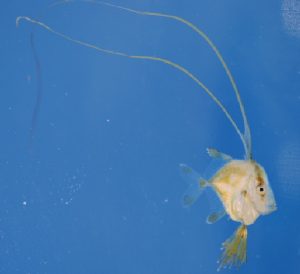 By most reports, lookdowns can be very hardy and long-lived aquarium specimens when housed in an appropriate environment. The primary requirement for this species, as regards the enclosure, is not simply a large tank, but a large amount of open swimming space. Aquarists who are loath to construct “empty” or “barren” aquascapes do best in avoiding this fish. The ideal layout for an aquarium housing lookdowns consists of a flat, open, soft (i.e., sandy or silty) bottom with little or no obstruction from large rocks, corals, etc. However, so long as a completely open area is maintained, the placement of sea fans, gorgonians, seagrass, and/or young mangroves at the extreme ends is probably acceptable, as it might help to reduce collisions into the side panels of the tank. 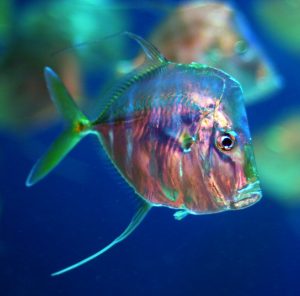 An abundance of iridophores make for a flashy fish rich in reflective pigments. Photo by Jeff Kubina.

Lookdowns are shoaling fish; as such, they should be kept in groups of five or more. They are fairly peaceful animals that can be safely kept with most large (that is, not small enough to be swallowed) tankmates. Nevertheless, the type of tank layout they prefer will be prohibitive to many reef-associated species. Compatible species include those from most roving, space-loving groups such as batfish. Systems that include an open (and preferably deep) sand bed can include rays, flounders, waspfish, crocodilefish, sea robins, flying gurnards, coral cats, some scorpionfish, some labrids, and some burrowing fishes (of appropriate size) such as tilefish, jawfish, and sleeper gobies. 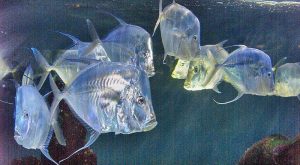 Lookdowns will be more attractive, be healthier, and behave more naturally when housed together in groups. Photo by Georges Jansoone.

Lookdowns are not especially prone to head and lateral line erosion. Newly acquired specimens can be somewhat prone to Cyptycaryon infestation. Open wounds (which may be particularly common in crowded aquascapes due to collisions with obstructions) dramatically increase susceptibility to bacterial and fungal infection (Hemdal 2006).

Lookdowns will thrive on a variety of quality live or frozen food items. Young specimens can be offered bloodworms, brine shrimp, mysis shrimp, and small guppies. Mature specimens can be offered ghost shrimp, krill, larger guppies, and small chunks of meaty items (such as smelt, silverside, clam, squid, etc.). They may be trained to accept some vitamin-enriched, gel-based diets (Rosamond Gifford Zoo 2003).

Cultured lookdowns have recently become available in the ornamental fish trade. At the time of this writing, the sole (wholesale) supplier of tank-raised specimens is Proaquatix of Vero Beach, Florida.

Efforts by this company to culture lookdowns began in earnest in 2003. The goal of the project was commercial; basically, the rationale was that a considerable demand for healthy (especially juvenile) lookdowns existed, and that the company could, with existing resources, meet this demand. Already familiar with the culture of a similar species–the Florida pompano (Trachinotus carolinus)–in its established foodfish division, Proaquatix was rewarded with success fairly early in the project (Wagner 2010).

If large, solid structures are to be incorporated into the aquascape of an exhibit housing lookdowns, one should be sure to leave spacious, unobstructed corridors to swim through. Video by www.infinityaquariums.com.

That notwithstanding, rearing young lookdowns proved to be decidedly more difficult than rearing young pampanos. Lookdown larvae were found to be very small and quite “touchy.” Typically, only 10-20% of the larvae produced survived to first feeding. Around days 15-20, they exhibit a tendency to lose buoyancy control and float to the water surface. As they exceed ~6 mm, the elongated fin filaments of juveniles often get tangled together. In the end, out of ~4 million eggs, ~400 fish were raised to market size. Due to a number of setbacks (including infrastructural damage inflicted by Hurricane Katrina in 2005), the project was put on hold until last year (Wagner 2010).

As evidenced by the number and quality of specimens now entering the trade, their more recent efforts have been fruitful. At this time, most details pertaining to those techniques employed in the culture of this species are being withheld as proprietary information. The company’s present focus is not on working with new species, but rather on perfecting techniques used on (this and other) species that are currently in production (Wagner 2010).

Lookdowns produced by Proaquatix can be obtained through a number of retailers, or observed at public facilities such as Sea World and Ripley’s Aquarium of Myrtle Beach.

Owing to its distinctive shape, coloration, and behavior, the lookdown has the potential to become a popular aquarium fish. This unusual animal can be a fitting addition to many pelagic or sand flat exhibits. Wherever it is afforded with the necessary living space, it is quite undemanding in its care. The growing knowledge concerning its ecology and the recent availability of tank-raised specimens offer home aquarists an ever-increasing likelihood of success with the species.