These are good times to be a marine aquarist! I know the economy is in a bit of a slump and we are in a long and important war against terrorism. But even so, there are some good things happening in the marine aquarium trade. One of the most exciting things is that unusual fishes are showing up in the trade greater regularity! For example, there are dottybacks, damsels and wrasses that I have seen in aquarium stores for the first time in the last year. Many of these are being collected in places where collecting did not occur in the past (this is especially true for Indonesia). Members of the genus Rhinopias have also been showing up in the aquarium trade with greater regularity. These amazing scorpionfishes are the subject of this article. 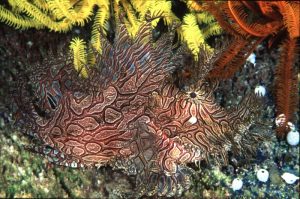 The scorpionfishes in the genus Rhinopias are highly sought after by the collector of the rare and unusual. This is Rhinopias aphanes, the lacey scorpionfish, which is thought to mimic a crinoid.

The Species In The Trade

There are two species that regularly show-up in the aquarium trade: The weedy scorpionfish ( Rhinopias frondosa ) and Eschmeyer’s scorpionfish ( R. eschmeyeri ). The weedy scorpionfish is a wide-ranging species that occurs from East Africa to the Caroline Islands, north to Japan and south to Mauritius. Apparently, most of those being collected for the aquarium trade are coming from Sri Lanka. This scorpaenid attains a maximum length of 9 inches. It has been reported at depths from 10 to 297 on bottoms sandy, macroalgae, rubble and rocky substrates (Eschmeyer et al. 1973, Myers 1989).

Eschmeyer’s scorpionfish has been reported from Mauritius to Sri Lanka (Lieske and Myers 1994), although I have seen specimens from the Philippines and Papua New Guinea and have observed it in Indonesia. This species is usually uniform in color and can be lilac, yellow, orange or brick red and attains a maximum length of 7.5 inches. Rhinopias eschmeyeri is reported to occur on open sand bottoms at depths from 7 to 132 feet (Conde 1977, Debelius 1993). 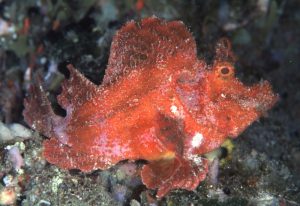 The first dorsal fin of Eschmeyer’s scorpionfish is sail-like, with no or very reduced incisions between the dorsal spines.

I should point out that at least one fish expert (Rudie Kuiter) has suggested that R. eschmeyeri is not a valid species, but a variant of R. frondosa. One characteristic used to tell the two species apart is the membrane between the spines and rays of the first and second dorsal fins. In R. eschmeyeri the membrane is incised – that is, the edge of the dorsal fins are nearly straight. In some individuals of the Eschmeyer’s scorpionfish, the first dorsal fin is almost sail-like. In the weedy scorpionfish the membrane is deeply incised so the dorsal edge appears to be jagged.

Rhinopias eschmeyeri also exhibits a uniform body color, while R. frondosa usually has round and oblong pale spots and blotches (these can be less conspicuous in some individuals). In R. eschmeyeri the supraorbital appendages are unbranched and flattened (they are leaf-like), while those of R. frondosa are branched. It may be these differences represent sexual dimorphism within R. frondosa. I have seen photos of apparent pairs of Rhinopias, where one fish was a “perfect” R. eschmeyeri and the other fish looked more like R. frondosa. The verdict is still out, with more study being required to determine how many Rhinopias spp. actually exist. 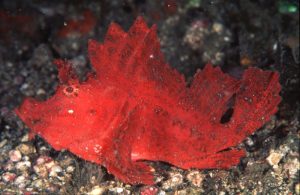 The weedy scorpionfish is the most commonly seen species in the aquarium trade. This species often sports rings or spots on the body, but in some individuals, like the one pictured here, they can be indistinct.

The Rhinopias spp. are known to shed their cuticle, or the outer epidermal layer. This helps rid the body of algae, parasites or encrusting organisms. In some individuals shedding can occur quite often. For example, a R. eschmeyeri was reported to shed about every 12 days (Eschmeyer et al. 1973). The frequency of shedding may increase if the fish is suffering from parasitic infections. Do not freak out if the eyes of your Rhinopias become cloudy – they sometimes do before the fish shed. These scorpionfish may also position themselves in front of strong water flow to facilitate the shedding process.

These fish rarely swim, but move about by crutching along the bottom on their pectoral and pelvic fins. When hunting they remain motionless and wait for their prey to approach within striking distance or they slowly stalk their quarry. When a specimen is very hungry and use to food presentation in the aquarium, it may “hop” rapidly toward a prey item, rather than approaching it slowly. When they get close enough to their prey the Rhinopias will_ lunge forward and suck in its victim. Rhinopias_ will also rock forward and backward in order to mimic a piece of debris sitting on the bottom.

Keeping them In Captivity

All the Rhinopias readily adapt to captivity and because of they are relatively inactive they can be kept in smaller aquaria (Dinesen and Nash 1982, Howe et al. 1988, personal observation). I would suggest that a smaller Rhinopias be housed in an aquarium of at least 20 gallons, while larger adults will do fine in a standard 30 gallon tank. Although some décor is needed to help your Rhinopias “feel at home,” do not over do it. These fishes (especially R. eschmeyeri ) often sit in repose on open sand, mud or rubble bottoms. Because these fishes tend to spend most of their time in the open (unlike some scorpionfishes, which are more cryptic) they make an interesting addition to the reef aquarium. 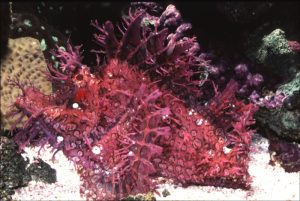 This is the classic form of the weedy scorpionfish, with conspicuous markings and long dermal appendages. This individuals is now on exhibit at the Omaha Henry Doorly Zoo.

Live food (e.g., ghost shrimp, mollies, guppies) will be needed to initiate feeding and many individuals may never accept anything but live fare. You should attempt to train your Rhinopias to take pieces of shrimp, squid and fish off of a feeding stick. One thing you should avoid is feeding your scorpionfish a diet consisting only of feeder goldfish. Raw goldfish flesh contains thiaminase, an enzyme that causes the breakdown of thiamin. If you feed your scorpionfish a diet that consists only of goldfish, they may become thiamin deficient, which can result in feeding cessation, clamped fins and nervous in coordination. If you have to feed them live food, gut pack mollies, guppies and/or ghost shrimp with a nutritious food (e.g., Cyclop-eeze®) before you feed them to your Rhinopias (some individual may be reluctant to feed on live ghost shrimp).

Hepatic lipidosis, or fatty degeneration of the liver, has been reported in a scorpionfish fed only fresh hake. This condition can cause liver failure, which leads to suppression of the immune system, hemorrhaging and anemia. Lipidosis is best avoided by giving your scorpionfish as varied a diet as possible and by not overfeeding. I would recommend you feed your scorpionfish to satiation twice a week. 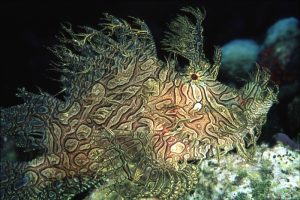 The lacey scorpionfish shows-up in the aquarium trade on rare occasions. It always has numerous skin flaps on the head, body and fins, antler-like growths over the eyes and dark lines on the body.

They can be housed with other fish, but I would avoid keeping them with species that eat encrusting invertebrates because they mistake the Rhinopias as a rock covered with food! Although on some occasions these fish may not harm your Rhinopias, in my mind it is not worth the risk. You should also be careful when putting them in tanks with other predatory fish. Although the deep body and venomous spines of these fish may dissuade most predators, smaller specimens may be eaten by larger frogfishes, other scorpionfishes or large groupers. An Eschmeyer’s scorpionfish I was keeping met a tragic end when its head was engulfed by a smaller striated frogfish ( Antennarius striatus ). I had placed several feeder fish in the tank and was watching these two fish stalk them. The Rhinopias was moving around a piece of coral when the frogfish decided to try and eat it! I quickly grabbed the frogfish by the tail and it released the Rhinopias, but the eye of the scorpionfish was damaged, became infected and it died several days later. I personally think that these fishes are best kept in a species tank – that is, an aquarium by themselves. It is not worth the risk of having you Rhinopias harmed by a tankmate.

These fishes are highly predatory and will eat any fish that they can ingest. Don’t underestimate the size of a Rhinopias mouth! If you see a Rhinopias yawn you will realize that they can eat relatively large prey items. I had an Eschmeyer’s scorpionfish eat an anemonefish that I thought was to deep-bodied for it to ingest – boy, was I wrong! That said, my good friend Mitch Carl tells me that his 5-inch Rhinopias frondosa will not eat a fish larger than a molly. The Rhinopias will also consume ornamental crustaceans, including shrimps and crabs. 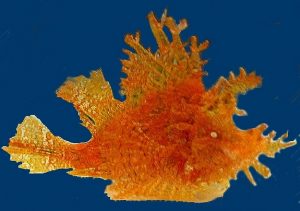 This beautiful weedy scorpionfish, photographed by Eric Reynolds of Aquamarines, was collected in Sri Lanka.

Almost all the Rhinopias I have kept or seen in captivity had abraded lower jaws. They apparently swim against the plastic bag during shipping, which results in injury to the skin on the lower jaw. In most cases, this wound gradually heals, but it is a possible portal for bacterial infection which can lead to death of the fish. I have seen Rhinopias die as a result of severe bacterial infections that manifested themselves as skin lesions on the body. These fishes can also suffer and succumb to ich ( Cryptocaryon irritans ) and coral fish disease ( Amyloodinium ocellatum ). It is possible to treat them with common anti-parasitic medications (be careful when using copper-based meds) or by dropping the specific gravity (down to 1.012-1.014 for a couple of weeks).

Of course, these piscine jewels command big bucks! But if you are really in to the odd and want to display a fish in your aquarium that will break the ice at your neighborhood parties, then why not attempt to acquire a Rhinopias!

For numerous Rhinopias photos and much more information on the biology, behavior and the various species in the genus, join the CoralRealm website (www.coralrealm.com).

I want to thank Dennis and Eric Reynolds (Aqua Marines), Randy Walker (The Marine Center), Jim Walters (Old Town Aquarium, Chicago) and Julian Sprung for helping me acquire Rhinopias over the years. Mitch Carl (Omaha Henry Doorly Zoo) and Jim Walters shared some of their observations on Rhinopias frondosa (if your in the Omaha area, you should go see the beauty at the Henry Doorly Zoo!). Thanks to Eric Reynolds for supplying the photo of the orange R. frondosa.