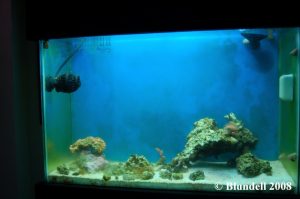 My final “goal” for this series to answer some basic questions. I get emails all the frickin’ time asking me questions like “what kind of pumps should I use”, “are brand X pumps worth the money”, “what is the best kind of flow”, “what is this random flow and linear flow I keep hearing about”….

I’m at a loss for words. How can tell someone what pump to buy when I don’t know a thing about their desires? More importantly how can a hobbyist decide how to set up their tank if they don’t have an idea on how the water will move in the tank? 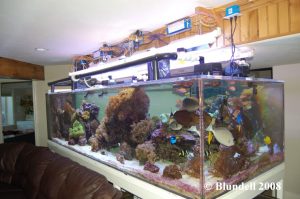 Whether you plan to set up a small invertebrate tank or a seven hundred gallon aquarium, you will need to think about water movement and flow design.

Setting Up A Salt Water Aquarium

Before you ever put water in your aquarium make sure you know how you are going to move that water around! You wouldn’t believe how many people (most likely including you, the reader) set up their aquariums and then start to think about how the water is going to move around. Well, for your next aquarium (lets face it everyone sets up another) lets try to tackle this issue before hand.

I love semantics. I’m not sure why but terminology in general is just fun. Maybe it is the challenge of working with something that is almost always wrong. Regardless of the reason, I do think it is important for hobbyists to first grasp these terms and know how they relate to their aquarium.

I hear this term about 10 times per day. Let me be clear, you do NOT want truly random flow in your aquarium. Example- you take 10 powerheads and stick them in your 75 gallon tank, just hanging their by the cords. You turn them all on and let them blow around. This means, that just by random chance, everyone once in a blue moon, completely random, all those powerheads for a moment will be near the surface facing straight up blowing water out of the tank and all over the lights. It also means that every once in a while the powerheads will blow directly into the sand all together at one time. It also means that all the powerheads would face directly onto your frogspawn and blow all the tissue right off. Hey, if it is random it is bound to happen at some point. The key to defining Random Flow is that by definition it is NOT predictable.

This is what people describe when they usually say Random Flow. Chaotic Flow means that the moving water will make contact with water moving in a different direction. Example- you take two powerheads on opposite sides of the aquarium and you face them both towards the middle. At the middle of the aquarium the two bodies of fluid run into each other and the momentum is dissipated by pushing water in different directions. This is certainly NOT random. In fact it is very predictable. If you see an aquarium like this and look at how the water is moving, you can predict how the water will be moving 5 minutes later, 10 hours later, and even 2 weeks later. It will be moving just like it is right then and there in front of you. 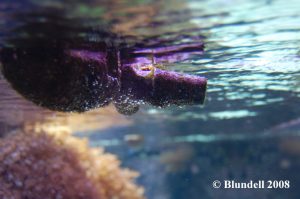 This flow is characterized by changing the direction, speed, volume, or some other aspect of the water flow. Example- the most common example I can think of is the rotating output devices like a Sea Swirl. If you aren’t familiar with them I’ll just simply state that they basically take water from a powerhead and push it through an outlet. However, unlike a standard powerhead the Sea Swirl sweeps that outlet horizontally back and forth changing the direction that the water is coming out. Now, lets say you have a few of these in your tank. They continually move back and forth and change where the water is going. This creates some Chaotic Flow, but that Chaotic Flow is changing… in fact that is why it is Alternating Flow. This is once again NOT Random Flow. I can look at an aquarium with several Sea Swirls. I can time how long it takes each of them to move back and forth. Then, I can calculate where they will be pointing in 10 minutes, in 10 hours, in 10 weeks. This is certainly NOT random but is in fact very predictable. 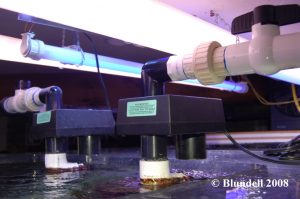 This SeaSwirl is a device which rotates the output of a pump. This causes an alternating flow pattern.

Water flowing in one direction is termed laminar flow. It also describes the idea of bulk water flow in that direction. Example- having all the water in your tank moving from the left side to the right side. This could be done by pumping in a lot of water on the left side, and having an overflow on the right side where the water leaves the tank. Thus all the water is slowly moving from left to right. Until recently this wasn’t used, but some adventurous hobbyists have really had fun with this. Another Example- having all the water flow around the aquarium in a circular motion. To get this idea imagine sticking your arm in a 5 gallon bucket and swirling the water around in a circle. If you did that in an aquarium the water would always be flowing in one direction in relation to any fixed item (like a coral). 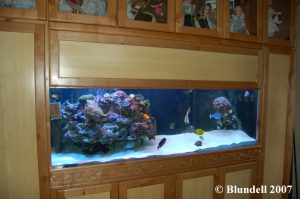 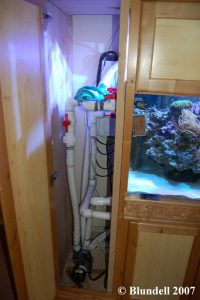 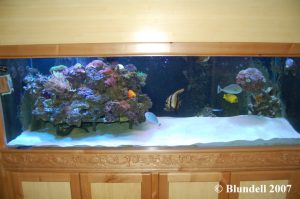 This type of flow has been nearly non existent in the hobby until recently. This type of flow is characterized by pushing a very large volume (maybe the entire tank volume) in one direction for a short time (lets say 2 seconds) and then pushing it all back in the other direction. This is usually very predictable. Example- Having the entire aquarium sitting on a Teeter-Totter (seesaw) so one side move up, and then down, and then up, and then down (as the other side moves opposite). Another Example- having a piston on the side of the aquarium pushing in, then pulling out, then pushing in, then pulling out. Either way would cause all the water to move back and forth.

This is characterized by moving the bulk of the water up and then down, then up, and then down. Example- dropping a five gallon bucket of water into your 75 gallon aquarium all at one time, then pulling back out an entire 5 gallon bucket. This is seen in tide pools as a wave crashes in and the water all “surges” up filling the pools, then drains back out. This happens over and over with each passing wave. It also takes place on reefs where strong currents and strong winds cause large waves. A scuba diver may notice this as they are literally picked up, then set down, then picked up, then set down by the force of the water around them. As a side note, it is a blast to witness this under water. Nothing is cooler than seeing a whole school of yellow tangs swimming by as they get lifted 4 feet up into the water column, and then are pushed back down with each passing wave. Note: this is actually done in a circular motion. 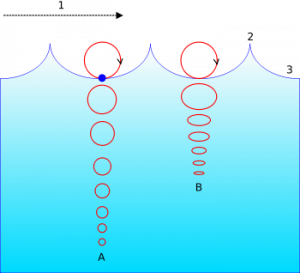 This is really the lack of water flow. Most aquarists are trying to avoid this, but some aquariums are actually designed to minimize water flow. Delicate animals (say jellyfish) or coldwater systems are often made to prevent water flow.

Describes the vertical movement of water in a circular pattern (remember horizontal circular flow is a type of laminar flow). Example- most kreisel tanks are designed to keep items slowly moving in a circle. This is often done to produce a “suspended” environment. The most common examples include jellyfish aquariums and larval rearing aquariums.

Water flow is a huge topic. For now the goal of this article is to get people thinking of terminology and how to properly describe water flow. There are many ways to move water and many directions/speeds/volumes for it to go. To conclude, keep this in mind as we move forward in describing water flow.

Adam Blundell M.S. works in Marine Ecology, and in Pathology for the University of Utah. He is also Director of The Aquatic & Terrestrial Research Team, a group which utilizes research projects to bring together hobbyists and scientists. His vision is to see this type of collaboration lead to further advancements in aquarium husbandry. While not in the lab Adam provides services for of one of the Nation’s largest hobbyist clubs, the Wasatch Marine Aquarium Society (www.utahreefs.com). Adam has earned a BS in Marine Biology and an MS in the Natural Resource and Health fields. Adam can be contacted at adamblundell@hotmail.com.