Media Review: Peppermint Shrimp, International Trade, and From the Periodicals

This column, the first Media Review for Advanced Aquarist will cover two pieces on highly significant, related topics for advanced aquarists, and two short notes from Coral Reefs. The first book is on a subject that will be of increasing interest and importance – the
aquaculture of organisms of value for marine aquarists. The second is a draft report of the U.S. Coral Reef Task Force subgroup on the trade in coral and coral reef organisms. As will be seen, conclusions from the task force report will certainly serve to focus more attention on the captive breeding of aquarium species. 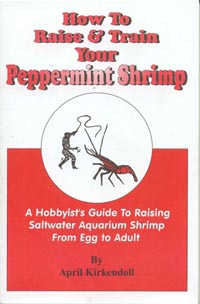 How To Raise and Train Your Peppermint Shrimp: A Hobbyist’s Guide To raising saltwater Aquarium Shrimp From Egg to Adult.

This volume contains 152 pages, illustrated with clear and helpful line drawings of shrimp life cycle stages and rearing equipment. There is a bibliography and a useful list of Aquaculture Suppliers, plus an index.

In spite of its partially comic title and tone, and the simplicity of its production, April Kirkendoll’s slim volume is of real significance. Her book provides not only an outline of the complete life cycle of the valuable peppermint shrimp Lysmata wurdemanni, but also detailed instructions on how to bring them through every stage of this cycle, from egg to reproductive effectiveness.

Her descriptions of specific techniques, as well as her usable diagrams for simple homemade pieces of equipment, make it possible for many of you to establish modest but productive hatcheries. In my experience L. wurdemanni is both a particularly useful and a decorative minireef citizen. The shrimp, in two aquariums I’ve had with real Aiptasia infestations, cleared the problem up in surprisingly short order. They’re pretty, especially in pairs, and kind of cute when they come to clean you fingernails when you have your hands in the tank. They are another organism we can and should stop taking from the wild.

Kirkendoll warns in her preface, “… this book is not for beginners. You should already know the basics of aquarium-keeping, since most of your success will depend on good water quality.” The remainder of the book goes well beyond the basics and the compact chapters assume you are familiar with the ins and outs of maintaining aquariums and the associated equipment. The first chapter, “Shrimp Biology 101” outlines the anatomy and provides the necessary technical vocabulary to discuss the shrimp’s reproduction and life cycle, and concludes with a diagrammatic overview of its major molts and stages of development. The next chapter jumps right into the technical details of “Breeding Peppermint Shrimp,” starting with obtaining a pair, setting up the spawning tank and feeding them. She discusses egg laying and hatching next and then shares the tricks of her larvae collection method — using the airpump, liter bottle, night light device she diagrams. I know many of you would enjoy rigging it to your own standards.

The next section of the book is devoted to the larvae and their rearing. The author starts with a more detailed presentation on the stages of larval development and then discusses outfitting the nursery and caring for the larvae. The next step is a little more demanding. For example, to feed the larvae and bring them through their metamorphosis to adulthood, it is best to establish a brine shrimp hatchery. Kirkendoll gives excellent advice on establishing and maintaining these cultures. She also provides valuable tips on alternative foods, basing much of her work on the pioneering efforts of Martin Moe, as described in his Raising the Orchid Dottyback. A summary chapter concludes the main body of the book, with notes on issues in commercial breeding.

Kirkendoll finishes by documenting her failed attempts to close the life cycle of L. amboinensis, the Striped Cleaner shrimp and L. debelius, the Flame shrimp. She was not able to bring them past the fourth week of larval development and offers suggestions to those who would attempt to breed these attractive species. I hope some of you will take up the challenge. This little book, with its casual and informal style will help you get up and running. 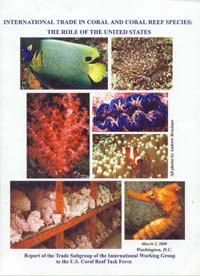 International Trade in Coral and Coral Reef Species: The role of the United States.

Report of the Trade Subgroup of the International Working Group to the U.S. Coral Reef Task Force. Washington, D.C.

This report contains a total of 51 pages, with 24 pages of text predominantly in extended outline form, illustrated with informative tables and graphs. Also included are five important appendixes; (A) Primary Importers and Exporters of Some Coral Reef Species, (B) Foreign National Laws Pertaining to Coral Harvest and Destructive Fishing Practices, (C) U.S. Federal, State and Territory Laws relating to Coral Harvest/Trade and Destructive Fishing Practices, (D) Draft Text for Outreach Material for Marine Aquarists and (E) Members of Trade Subgroup of International Working Group. There is an index.

The opening Executive Summary of this report puts the commercial exploitation of coral reefs and coral reef in perspective, stating, “Many coral reef species and resources are harvested globally for commercial purposes, including food fish, the aquarium trade, live fish markets, construction materials, curios, jewelry, pharmaceuticals and traditional medicines. International trade in coral, reef fish, live rock and other coral reef animals are activities that contribute to the decline and degradation of reefs, primarily through the use of destructive collection practices and overexploitation of resources.” Of these, of course, it is the danger to the aquarium trade organisms and the damage from destructive collection techniques that we must accept responsibility for, even as we recognize that other aspects of the exploitation of reefs are far more destructive. U.S. aquarists have a particular responsibility because we are the number one consumer of live coral and marine aquarium fishes (as well as the largest importer of coral skeletons and coral jewelry). Of an estimated 1.5 million marine aquarium hobbyists worldwide, 1 million are in the U.S. (p. 9)

Accurate data on the aquarium trade itself and on those species collected for it are difficult to obtain due to poor record keeping on collection – partially because no species of coral reef fish collected for the aquarium trade is listed as endangered under CITES (Convention on International Trade in Endangered Species). Based on the data available at least 800 to 1000 species of fish and 300 species of invertebrates are collected from the wild – including 15-20 million fish, from 45 countries. Of these almost half are imported into the U.S., with 2/3’s to 90% coming from Indonesia and the Philippines. The report states that the majority of Philippine fish and as much as 90% of Indonesian fish for the aquarium trade are captured with cyanide, making the U.S. the major importer of cyanide-caught aquarium fish (p. 7). Heavy collection pressure itself has a destructive impact. Two 1999 studies from Kona, Hawaii (where I live) indicate a significant impact on the 10 most collected species, with declines of 38-59% in a 10-year period. There is very little information on the harvest of invertebrates such as soft corals, anemones, crustaceans and molluscs not covered by CITES, with most of these also headed for the U.S. market.

The report lists other dangers and problems associated with collection: most collected species are herbivores that control benthic algae, mortality figures from source reefs to home aquaria have been found to be as high as 90%, some collected species have poor survival rates in captivity, and economic incentives lead to the collection of rare and difficult to capture species such as deep-water fishes.

The Trade Subgroup makes a number of recommendations to the U.S. Coral Reef Task Force. With respect to other nations with coral reefs, these include: (1) continued active participation in international and regional organizations concerned with exploitation of coral reef species (2) expanded capacity to collect data, assess reef status, evaluate impacts of collection and enforce regulations (3) development and implementation of sustainable management, environmentally sound collection techniques and certification programs (4) establishment of alternatives such as aquaculture and coral farming.

For the U.S., the report suggests: (1) improved enforcement of regulations regarding coral species trade, including certification that organisms were not taken through destructive practices (2) development of educational material to raise domestic consumer awareness to ensure that demand for marine organisms does not contribute to the decline of reef species and the degradation of coral reef ecosystems (3) encouragement of alternatives to wild collection (4) development, with the marine aquarium industry, of practices to reduce mortality rates and improve product quality to ensure survival in captivity (5) prohibition of domestic harvest and collection by defined destructive techniques.

Many of us have been aware of the “dark side” of our hobby, and many voices have been raised at meetings and in publications with respect to these problems. Unscrupulous merchants in the chain from the wild reef to aquarium have made us an easy scapegoat for the decline of the reefs. If we don’t take immediate steps to demand that our love of coral reefs not lead to the detriment of the creatures we want to nourish and protect, regulatory agencies will declare our activities illegal. Here in Hawaii public sentiment is sharply against collection. All taking or possession of live rock and stony corals is prohibited, and in Kona, one-third of the coastline, designated as “fish replenishment areas,” is closed to fish collection. If fish population statistics don’t show positive effects from this strategy, collection
may become illegal. I will have accurate data on the effectiveness of this approach in the near future.

There is a bright side too, and opportunity. We must intensify our efforts to raise more species through aquaculture. You can start with Peppermint shrimp.

Analysis indicates no statistical differences in zooxanthellae gene types or density between pink and brown morphs. The depth distribution differed markedly, however, with the brown morph found predominantly in very shallow habitats. The pink morph possesses the pigment pocilloporin which is associated with slow growth rates and “superior competitor ability.” On the basis of this finding, the authors question the taxonomic identity of the two P. damicornus morphs.

Crabs of the genus Trapezia live in association with pocilloporid corals; Tetralia only in Acropora. “In feeding experiments where crabs were removed from all coral colonies we found that Acanthaster planci (crown-of-thorns starfish) consumed both Acropora nasuta and Pocillopora damicornis in equal numbers. When Tetralia and Trapezia crabs were present in their respective host species, A. planci consumed all the A. nasuta colonies but never consumed P. damicornis.” The Trapezia crabs were more effective in their defense, breaking off thorns at the pedicle. The Tetralia crabs pinched at the starfish’s tube feet, doing little damage.